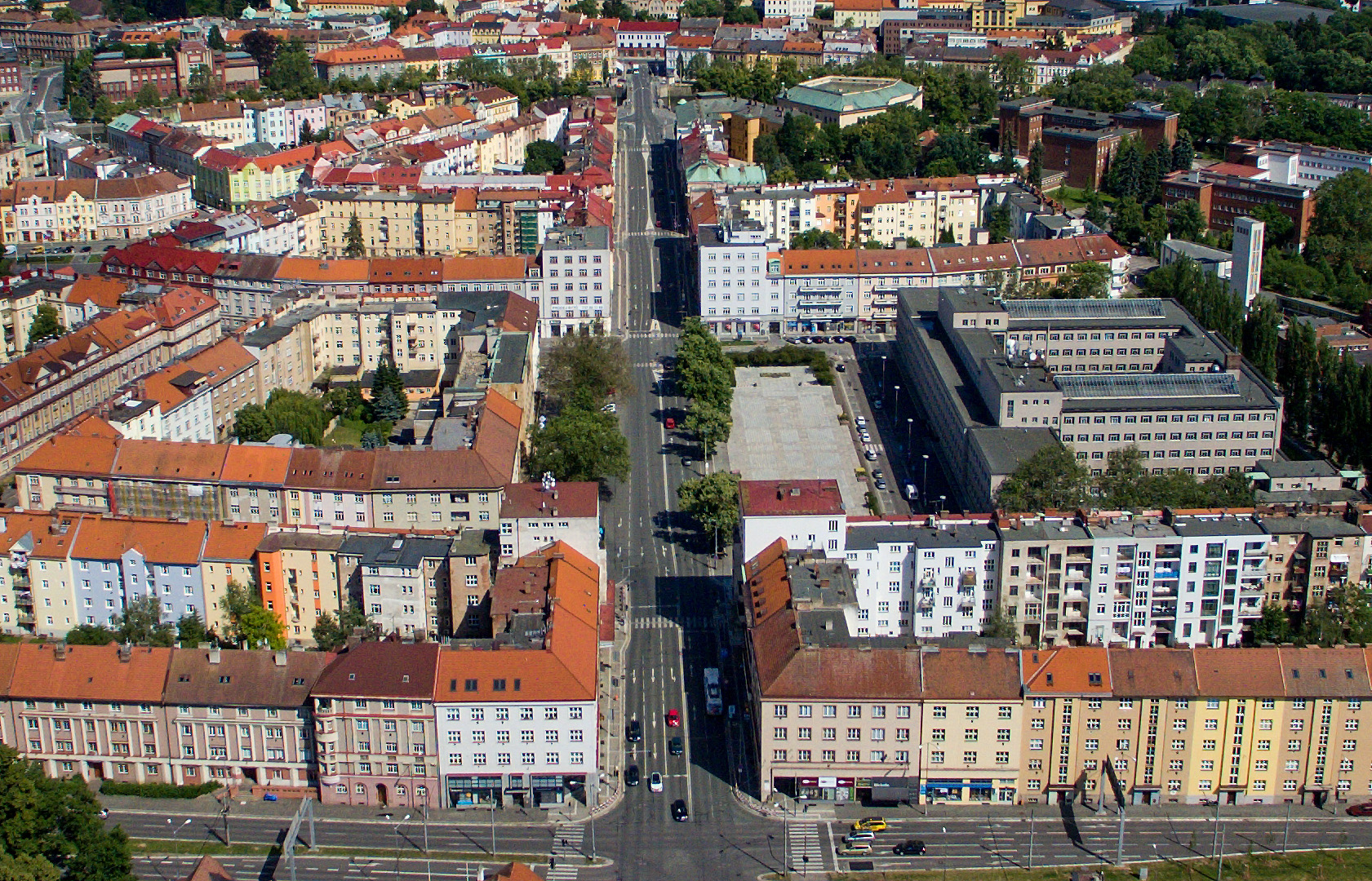 The first meeting of the evaluation committee on 6 April 1925 was attended by František Ulrich, the mayor the head of the Karel Friedrich municipal technical office; Josef Kotek,
the mayor of Prague Suburbs, the traffic engineer Josef Šejna, and the architects Vladimír Zákrejs and Ladislav Machoň. The absent members of the jury were architects Antonín Engerl and Bohumil Hübschmann and architectural historian Zdeněk Wirth. The deliberations continued twice more, on 18 April and 13 May. The jury decided not to recommend any design. The main reason was that “none of the designers took into account the use of the view of the city’s landmark – the cathedral and the tower.” There are two surviving sketches by Vladimir Zákrejs. Several recommendations emerged from the designs: the square was to be created between Mánesova and Jeronýmova Streets so that there would be “a view of the silhouette of the minster and towers, namely the entire length from the mouth in Husova Street to Okružní (Střelecká) Street.” Furthermore, the jury recommended that the front of the square towards the city should be resolved by adding an important public building (Gočár suggested placing the theatre towards Prague Suburbs) and the congregation of the Czechoslovak Hussite Church should be placed in the block development at the corner of Nerudova and Kollárova streets. In contrast to Oldřich Liska’s designs, the jury did not recommend placing
a stadium or a large training ground near the square. It recommended that the theatre should not be placed in the square at all and found another location for it – the Elbe embankment, on the site of today’s 5. května Square. The jury recommended “the sale and development of
the plots of land along Klumparova Street in their entirety, and in Mánesova and Jeronýmova Streets as long as they do not interfere with the layout of the square. This will allow sufficient time to draw up a definitive development plan.”

There was a number of aspects of Gočár’s plan that bothered the jury: it claimed that
the square “is, however, oversized,” and the position of the theatre “facing the city [...] is isolated and detrimental to economic traffic. Until the theatre was built, the square would have no form. [...] The wall of the block development on the waterfront is inappropriate and does not correspond to the character of the city, which has its best spaces here and requires a solution of individual buildings in the green.” Furthermore, the jury noted that “the formal concept of
a flat roof universally used is alien to the city.” This was later criticized by Vladimír Zákrejs, who argued that such an effort to transfer elements of the big city (high-rise buildings, flat roofs, squares without greenery) to small, rural towns was harmful and basically ridiculous.
In spite of these comments, however, the mayor František Ulrich pushed for
the implementation of Gočár’s design, and over the next ten years Gočár designed solutions for the façades, masses, heights and street lines of the entire square and adjacent streets. Paradoxically, the myth of Gočár’s victory in the competition was sown by his competitor Alois Kubíček in his article “Práce Josefa Gočára v Hradci Králové” (The Work of Josef Gočár in Hradec Králové) published in Styl magazine in 1926–1927.

It should be noted that Gočár’s original design was significantly different from the final solution. Gočár designed mainly tenement houses on the northern and southern fronts.
On the site of Rudolf Steinský-Sehnoutka’s later palace, a national house was to
stand – a multifunctional municipal building with a hotel. Gočár designed three prismatic
high-rise buildings at the entrance to the square, but by 1926, when the intended theatre was moved elsewhere, he already planned four buildings. In the southern part there were to be three enclosed blocks of tenement houses – one between Střelecká and Mánesova streets, one between Mánesova and Jeronýmova streets (where the railway headquarters was later built) and the last between Jeronýmova and Šafaříkova streets. These blocks of buildings were to contain spacious two- to three-room flats, and all the tenement houses were to have flat roofs. In the middle of the blocks there was to be a common, communal space with a park and playgrounds – in this respect Gočár must have been inspired by the Viennese Gemeinedebauten. However, the residential character of the square and its surroundings soon changed: in 1927 Rudolf Steinský-Sehnoutka built the administrative palace of his textile concern in the northern front of the square; in 1928 it was decided to build the headquarters of the state railways according to Gočár’s design; and between 1928 and 1934 four prismatic tower buildings were gradually built, which had a hybrid function: administrative, commercial and residential.

The question is the location of the intended Ulrich monument. Gočár’s pupil and collaborator Oldřich Šmíd claimed that Gočár “changed its location on the transverse compositional axis several times until he concluded that no statue was suitable for a square conceived in this way.” The surviving designs, however, are not nearly as convincing. Gočár designed a statue on a tall, narrow, prismatic plinth in both his first designs of 1925 and in one of his last proposals for the overall design of the square in 1930. Its location, unlike the mass and function of the buildings lining the square, did not change substantially. Šmíd’s testimony was ultimately the reason the statue of František Ulrich was not installed in Ulrichovo náměstí Square in 2002, but this is only a secondary source, and all of Gočár’s designs testify to
the contrary.

It is true that there was not much space for greenery in the square until the 1930 design envisaged two green areas with shrubs and lawns interspersed with axis-like paths.
In a proposal designed two years earlier, the entire wide strip in front of the railway headquarters was to be planted with grass and interspersed with diagonal paths, and four poplars were to be planted in front of the headquarters to form a wall between Ulrich’s statue and the south front of the square. When the surface of the square was finally completed between 1931 and 1933, Gočár prevented the planting of any trees, and only a row of poplars was planted behind the railway headquarters building in Nerudova Street. In 1973, a statue of Klement Gottwald, after whom the square was named since the president’s death, was installed in the eastern part, and a swimming pool with a fountain was built in the opposite western part. The sculpture of Gottwald by Josef Malejovský was removed in 1990, and
the fountain was completely renovated in 2006-2007. An attempt to complete the square with a statue of Ulrich in 2002 by the winners of an art competition, sculptor Pavel Doskočil and architect Alexander Wagner, ended in failure for the above-mentioned odd reasons. In 2019, the idea of installing Doskočil and Wagner’s seventeen-year-old design briefly ran through
the media, but no real steps were taken towards realising. 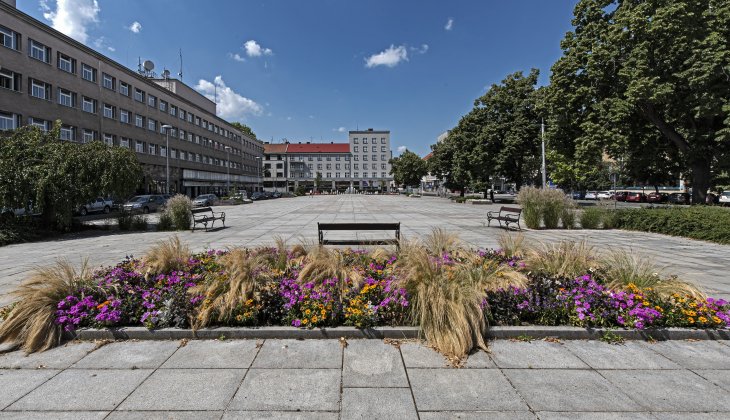 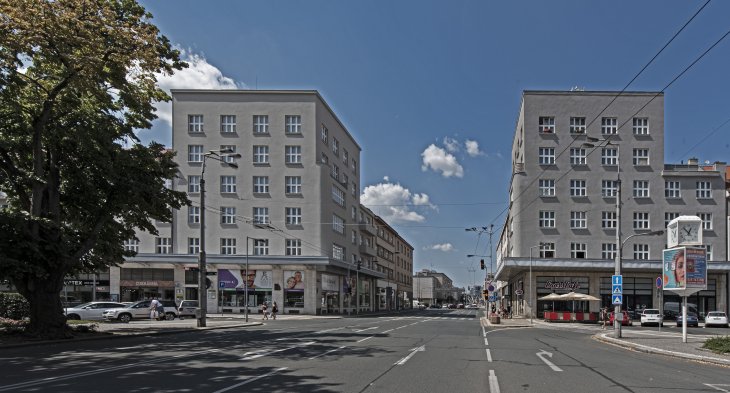 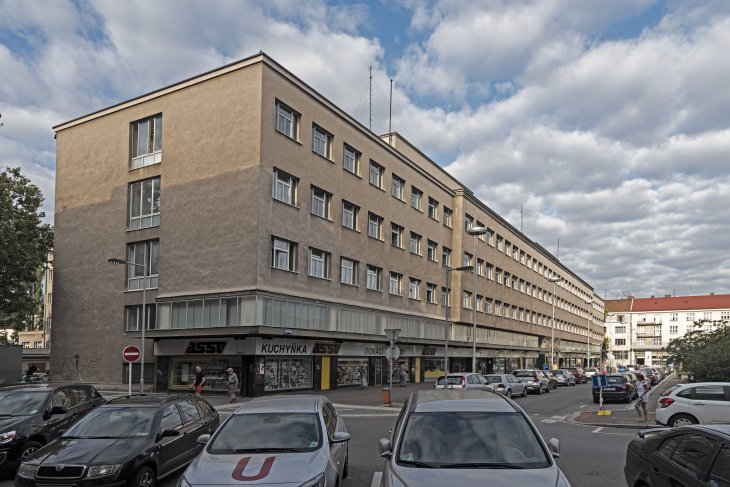 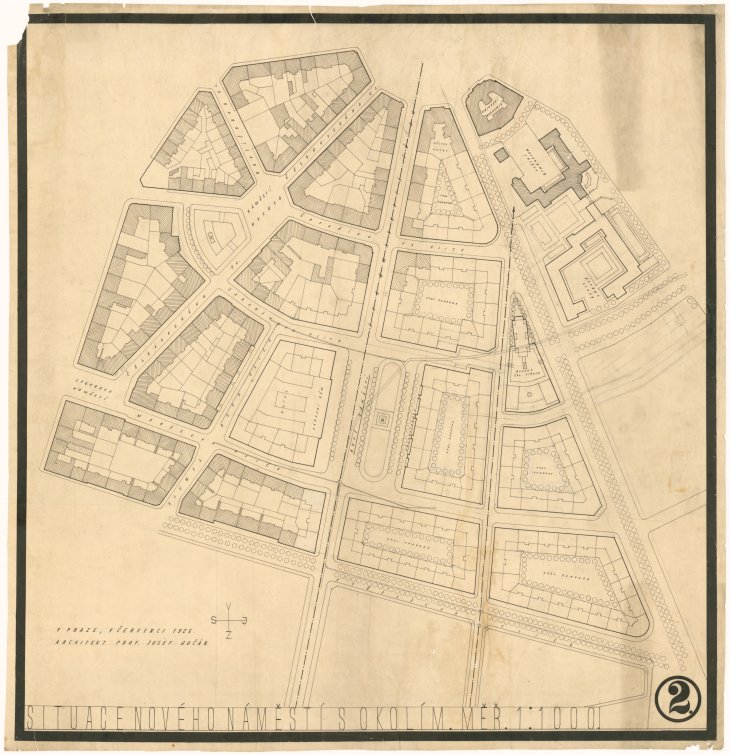 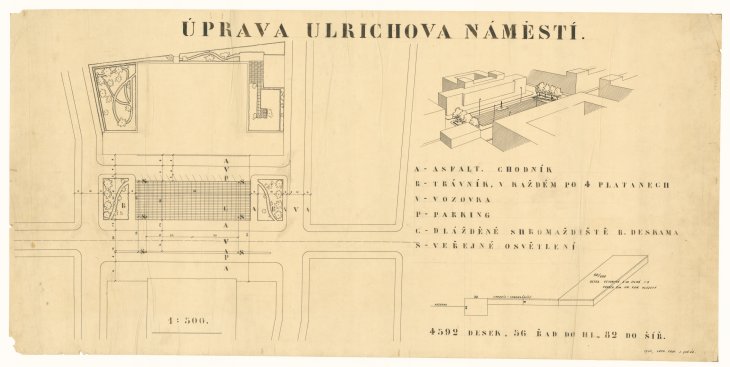