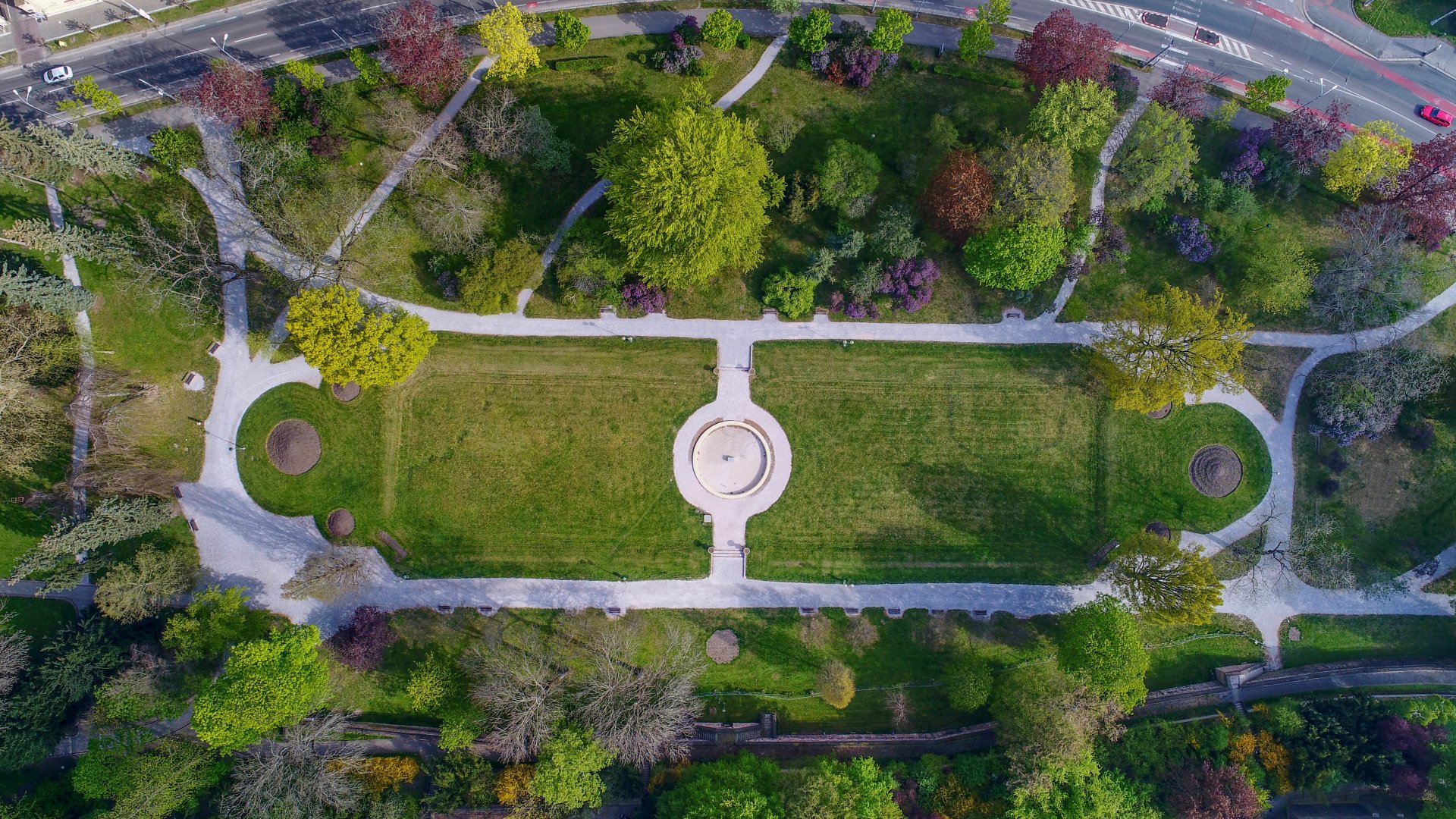 In 1904, the city decided to transform an unsightly longitudinal space under the fortress terraces north of the old town, which had served as a storage area with several storage sheds, into a representative city park. The Prague garden and park architect František Thomayer was asked to design it. Thomayer designed a central rectangular space with a sunken lawn parterre, in the middle of which was a large circular water tank with a fountain. At each end of this promenade space, surrounded by a wide gravel path, were large cairns, raised circular beds, which were planted with colorful annuals forming various ornaments. According to contemporary photographs, mature palm trees were planted on the tops of the croups soon after the park was completed, but they were probably too expensive to take care of and did not last long. The central pool was accessible by several steps on each side and the stairways were lined with decorative vases with flower planting. Conical and other smaller, symmetrically spaced, circular beds were flanked by low thujas. Outside the representative rectangular promenade space, Thomayer planted irregular kidney-shaped beds with more permanent plantings and shrubs. In between these beds there were patches of trees and shrubs – probably hazelnut trees, spruces, etc. Thomayer’s concept was to include park buildings,
a pavilion with a restaurant, but this was not ultimately carried out. The entire original Thomayer’s design did not include the western end, which consisted of the so-called seminary garden, which did not belong to the city and was surrounded by a fence.
The western part of the area was added to the park after 1918, when the city acquired
the space. In 1921 the mayor František Ulrich approached Leopold Batěk, a garden and park architect who was the main green planner of the town of Královské Vinohrady. Batěk wrote
the following on 5 January 1921: “I would particularly like to speak to you about the connection between the city and Žižkovo náměstí Square and the park you refer to in your letter. (...)
The solution of the connection can be twofold: I. provisional, with a future garden solution,
II. definitive with regard to the future regulation of the city in this part. I imagine the loosening of the area around the theatre, the removal of the shed, possibly the conversion of the hospital by rebuilding it, or if it remains, the relocation of the axis of the crossing so that it goes through the shed, thus widening the alley. I don't find the solution of a sloping descent, as now contemplated, practical (especially in winter) but mainly unaesthetic in a place in the center of the city where the main thoroughfare will one day be mainly at the bottom. I reckon with using either all or part of the seminary garden for the park and branching the descent in two directions complete with terraces, steps and paths. The solution in the form of a monumental staircase would require an enormous expense and would not even fit there.” Batěk suggested a two-legged concrete staircase with two resting terraces.
However, the development of this part of the area was not carried out according to Batěk's design and the area did not change until 1968–1970 when it was transformed by the architect Václav Rohlíček. Rohlíček incorporated a descent from the old town along an inconspicuous sloping path into the setting of an informal English park, which did not show any distinctive design concept. This sloping diagonal path leads to the eastern part of the park, and
a staircase bordered by walls of large rough granite blocks was built in the western area
(the former seminary garden), where a monumental statue of Jan Žižka was placed in 1971.
The Žižkovy sady Park requires restoration to the original Thomayer-designed layout and much richer and more varied planting. In 2012, following an architectural competition, the Projektil studio was selected to design the reconstruction of the park and adjacent terraces, but to date the restoration has not begun.
LZL
Monument Preservation 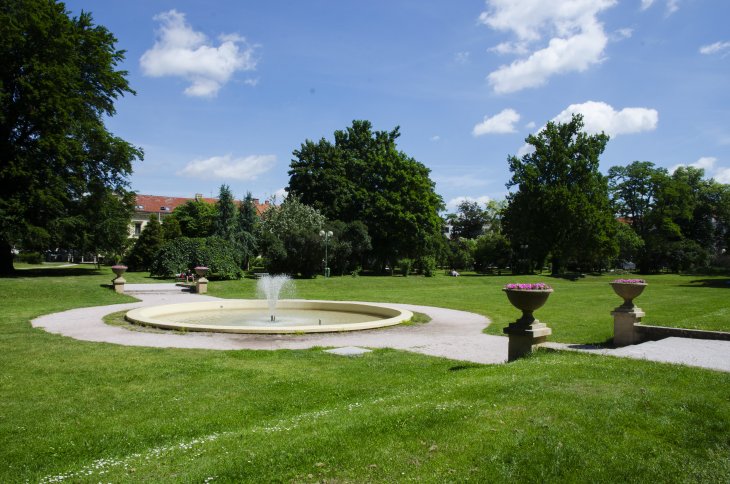 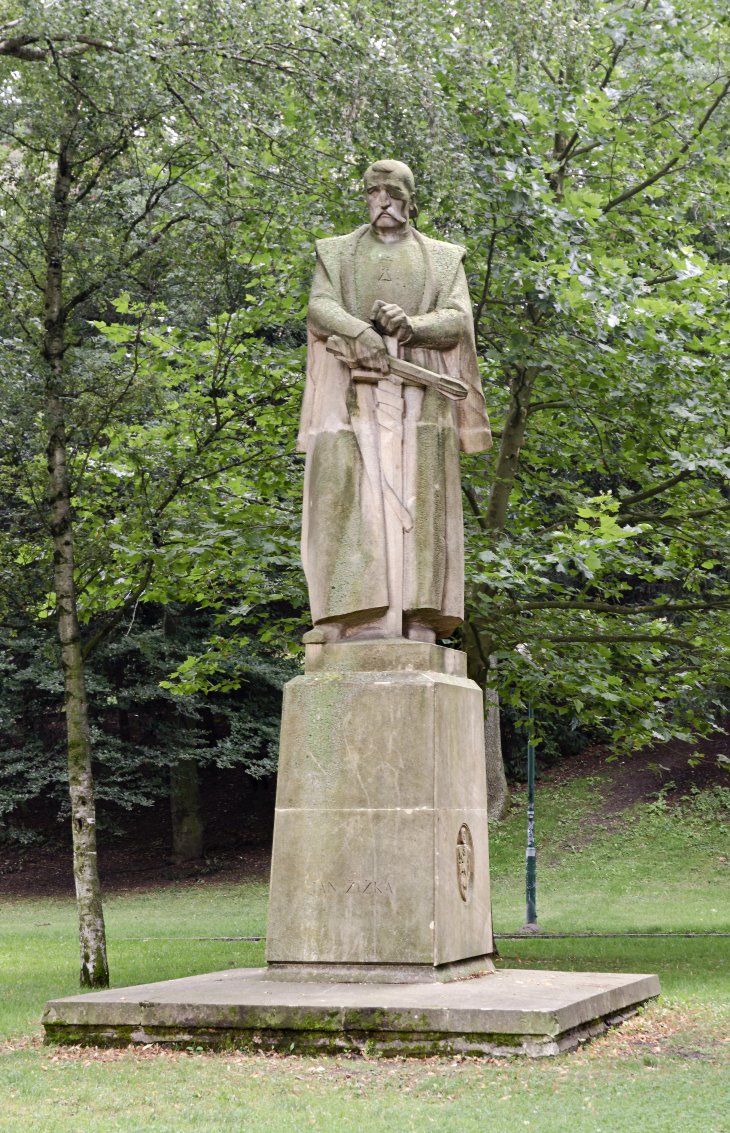