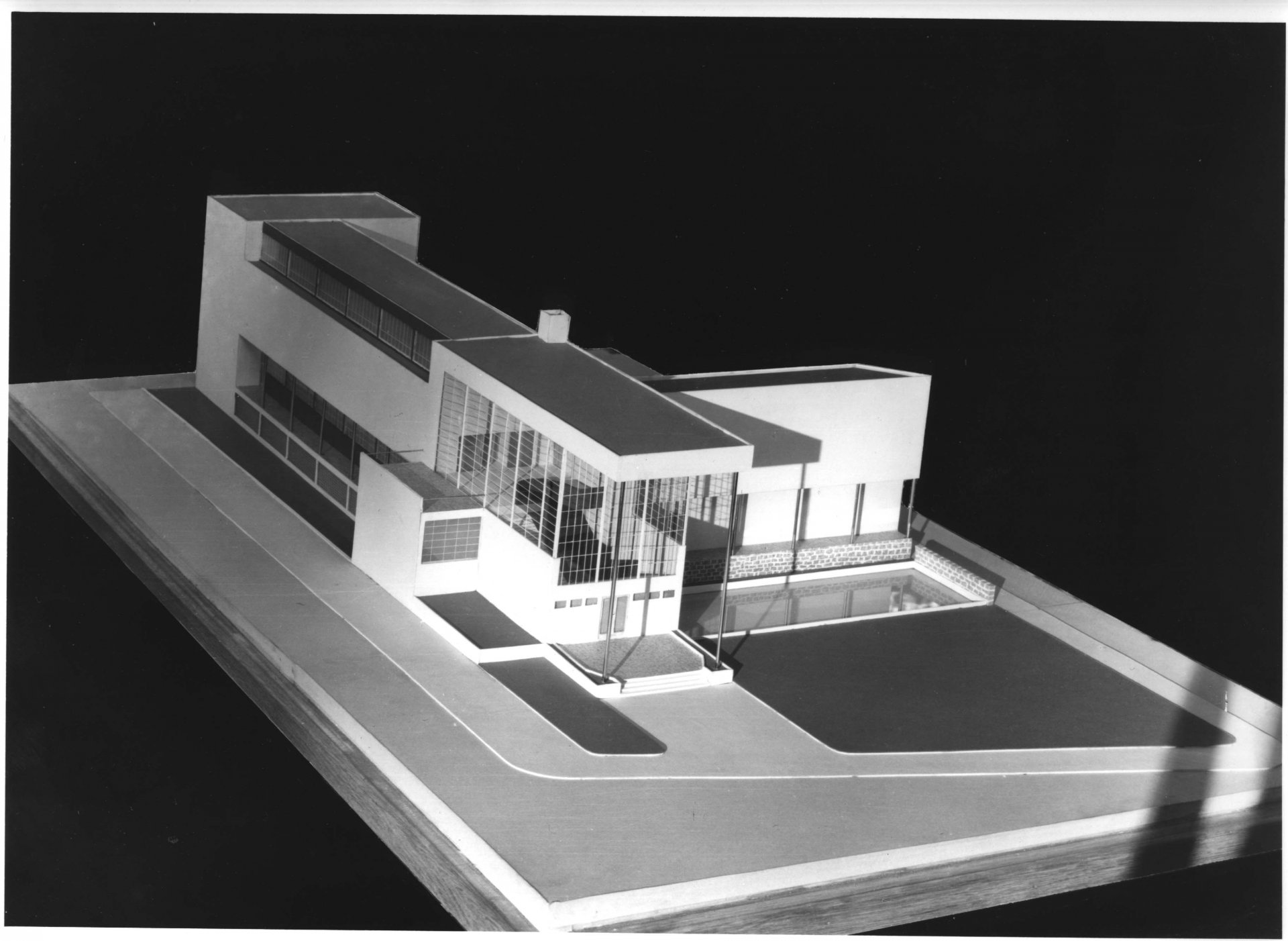 The first surviving plans of the new city gallery on the embankment, designed by Josef Gočár, are dated 1 September 1930. The owner (the Královéhradecká Savings Bank, established by the city to finance development projects and public works) was given the plans at a scale of 1:200. The designed building had four tracts in a rectangular layout. The southern wing was an entrance, the western tract at the embankment had a basement, the northern wing included exhibition halls, and the eastern tract had a walk-through gallery on columns on the ground floor and exhibitions spaces on the first floor. In the centre, there was supposed to be a resting atrium with lawn, a path in the form of loop, and several trees and shrubs.
The basement under the western wing parallel with the embankment contained a lapidary, a warehouse and facilities: a fuel storeroom, a boiler room, an engine room for hot-air heating, and a small caretaker’s flat with a separate entrance to the atrium. The flat had a bedroom, kitchen, pantry, and toilet. On the ground floor, there was the entrance atrium, toilets, the dressing room on the right side, and the custodian’s office. In the western tract, there was a large exhibition space, divided by a row of five supporting pillars in the middle. Graphic arts and architecture were supposed to be exhibited there. The south wing, facing todays’ Osvoboditelů náměstí Square and Divišova Street, was for temporary exhibitions. This area was divided by a row of three columns. In the northern tract, there were three separate small halls for exhibitions of sculpture. On the first floor, there were two (western and southern) tracts divided longitudinally into a part with exhibition booths (six in the western tract and four in the southern one) facing the atrium and another part with small walk-through exhibition halls (three in each tract) facing the street. In the northern wing, Gočár designed three large exhibition halls; in the east wing, there were six exhibition booths. All exhibition halls in the western and southern wings were to be illuminated by skylights. The generous foyer in the southwestern part of the building included a patio.
As shown in the drawing made by a red pencil on the ground floor plan, Gočár planned to build the gallery in two stages: the southern and western wings were supposed to be built in the first stage and the northern and eastern wings in the second stage.
The building exterior reflected Gočár’s fascination with the international style. The smooth façade surfaces alternated with large glass walls and strip windows (in the western and eastern tracts). The glazed entrance atrium had a protruded flat roof supported by two high columns on a circular floor plan. The subtle solutions corresponded with Gočár’s experiments with functionalism in his residential architecture projects (the hamlet of Baba, Zdeněk Sochor’s villa in Dvůr Králové, Otakar Med’s villa in Humpolec) and with the modernist style of the new public buildings on the embankment north of the museum: the spa designed by Oldřich Liska, the National Bank designed by Jan Rejchl, and the Sokol gym designed by Milan Babuška. Gočár’s regulatory plans for Eliščino nábřeží Embankment of October 1927 show that the buildings were parts of one complex.
Gočár worked on his plans even in 1931. The implementation plans were created in the scales of 1: 100 and 1:50, and the details included carpentry and locksmith features, glazed windows, infrastructure, etc. The plans of August 1931 included the first stage of the construction. In September 1932, Gočár was asked to amend the gallery project and design the joint headquarters of the gallery and the savings bank due to the lack of funds and the investor’s indecision about the further development of the institution. Unfortunately, the plans have not survived, so we don’t know how Gočár’s intentions. He only wrote: “As for me, I would make an effort to design a building that would be a worthy competitor of the museum designed by Kotěra.” According to the contemporary press, Gočár was paid 210,000 Czechoslovak crowns for this task and 80,000 for the previous designs. The brewery owners and the Club of Friends of Old Town of Hradec Králové objected to the intention to build the savings bank (and the gallery), arguing mainly against the depopulation of the old town where the savings bank had resided.
Although Gočár’s project was carried out, the investor revived the idea of one building for the savings bank and the gallery in 1935, when the project was designed by Jan Rejchl, and again in 1937, when a holistic regulation study of the future building was prepared by Josef Fňouk. These documents were then used to announce a competition in 1938 where Jindřich Freiwald and Jaroslav Böhm, Oldřich Liska, Karel Mahrla, Vladimír František Hofman and Václav Placák took part. The construction of the savings bank and gallery, however, was thwarted by the war.
LZL
Monument Preservation

The project was never carried out.