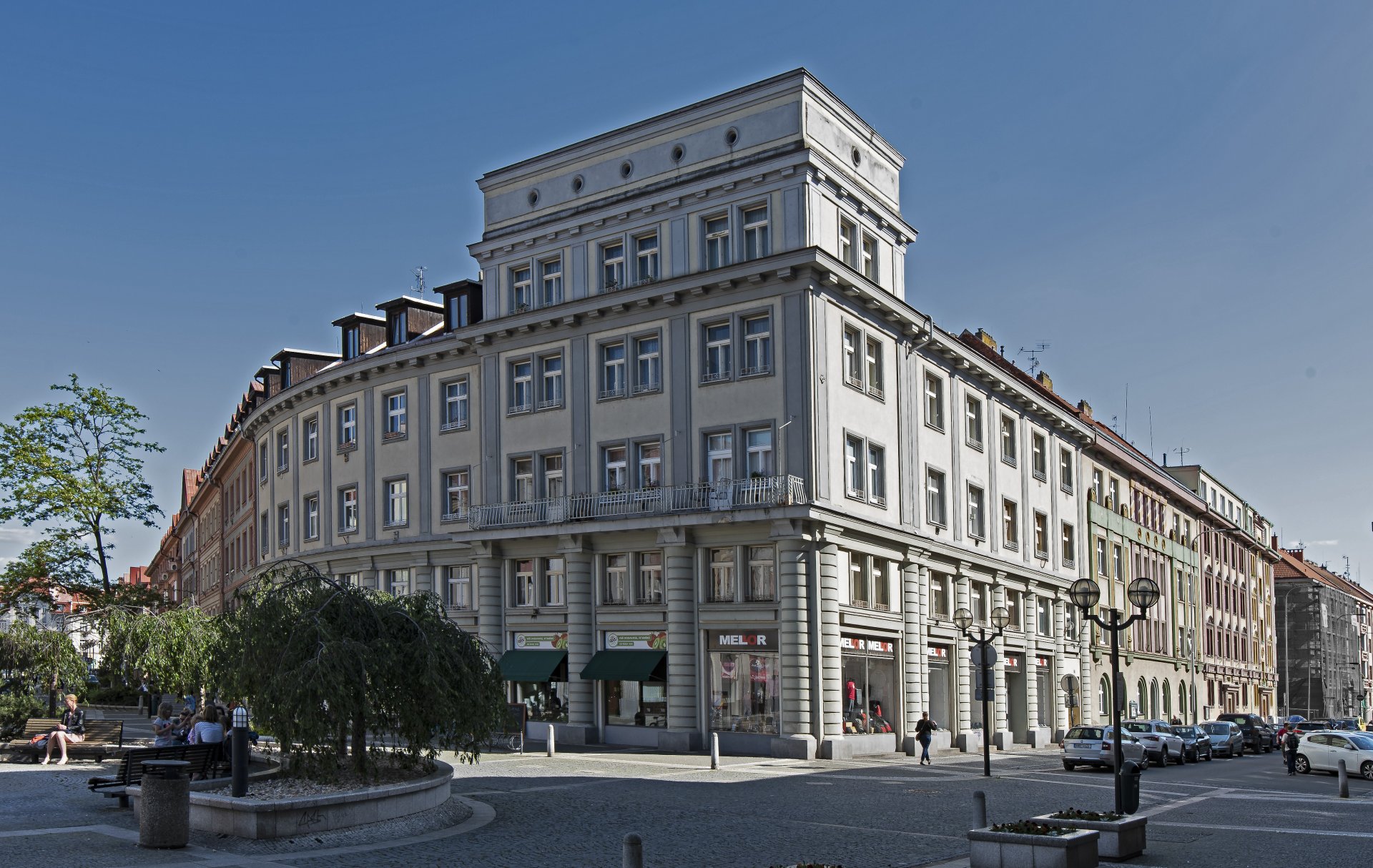 The architectural historian Pavel Panoch mistakenly attributes the generous cooperative house on the former Legerovo (today Baťkovo) náměstí Square to the architect Oldřich Liska, although there is no source documentation for this. On the contrary, Liska’s estate, stored
in the Museum of East Bohemia, shows that he did not design the project. The plans are marked with the stamp of the Association of Builders, which brought together prominent architects and builders shortly after WWI, and signed by Josef Jihlavec, the chairman of
the cooperative, and Josef Novotný. Josef Jihlavec did not usually design his own buildings, but Josef Novotný did before the war, so we can assume that he designed this tenement house. Another possibility is that the façade was designed by the builder Bohuslav Vaniš, also a member of the Association, who built apartment houses with very similar façades in the area (at 646 Mánesova and 471 Dukelská Street). A noteworthy detail of the construction procedure is the remark in the building permit: “The façade project has not been approved; therefore, a new project must be submitted.” It is therefore possible that the layout and
the façade were designed separately and successively by two architects/builders, which was not so unusual at that time.
The plans are dated April 1921, the construction began on 30 June 1921, and the building was completed on 1 June 1923. The building permit was issued on 7 August 1921.
The measurement and documentation of the function of the rooms used for the calculation
of the rent tax is dated 27 December 1923.
Of all the tenement houses built in the early 1920s, the design of the façade of the tenement house of the Pokrok Housing Cooperative is probably the most classical. An unusual feature is the tall, monumental column row that extends across the ground and first floors. The latter is separated from the second floor by a cornice, and the second and third floors are divided
by lesenes. The façade is finished with a classically articulated crown cornice with metopes. The corner avant-corps is one story higher and closed with another crown cornice. It is closed by a strip with circular openings.
There were nine spacious cellars in the basement, and the windows were broken into
the lowered courtyard and faced two workshops and one basement apartment comprising
a room, kitchen, toilet and pantry. Twenty-one sheds were attached to the courtyard wall. On the ground floor, ten shops, some with warehouses or workshops, faced the square and
the wing facing today’s Mánesova Street. The corner part and the adjacent shop facing Mánesova Street were occupied by Ladislav Duran’s bakery with a workshop and a built-in oven. In the courtyard part of the wing facing Mánesova Street there was an apartment connected to the shop consisting of a room, kitchen, living hall and toilet. The apartment with the shop was occupied by the gunsmith Holeček. In addition, there were shops with leather goods shop, tailor’s, dressmaker’s, and a clothing shop. Most of the tradesmen and craftsmen also lived in the house according to archival documentation. The house had two stairwells and two entrances, one from Čelakovský Street, one from Mánesova Street. On the first to third floor there were always four two-room apartments with a kitchen, equipped with a bathroom, pantry and toilet, and one three-room apartment located in the corner wing. One of the rooms of the three-room apartment served as a maid’s room, with a separate door just off
the hallway. The only difference between the floors was that on the second floor a balcony protruded from the corner apartment. The layout of the attic was atypical. In the wing facing Mánesova Street there was an attic space with one separate loft and nine other small storage cubicles separated only by partitions. In the part facing the courtyard there was one one-room apartment. In the corner avant-corps there was an apartment containing a room, kitchen and accessories and a communal laundry facing the courtyard. In the wing facing Čelakovského Street there were three more attic storage rooms and two apartments facing the courtyard: one one-room apartment with a kitchen and one studio apartment. There was another common laundry.
Although the Pokrok Housing Cooperative initially associated mainly small textile craftsmen and merchants, it soon became the headquarters of other important companies.
In a presentation publication Hradec Králové published in Prague by Karel Říha in 1925 it
is stated: “In this house there are located companies of Lad. Duran, Alois Boháč, Ant. Pecka, F. J. Čern and Ing. B. Vaniš, builders, and J. Holeček.”
The tenement house of the Pokrok Housing Cooperative is a unique example of modern classical monumentalism applied to a residential block building and provided a very comfortable standard of living for its time. Each apartment was equipped with a bathroom,
and the rooms were spacious and well lit.
LZL
Monument Preservation 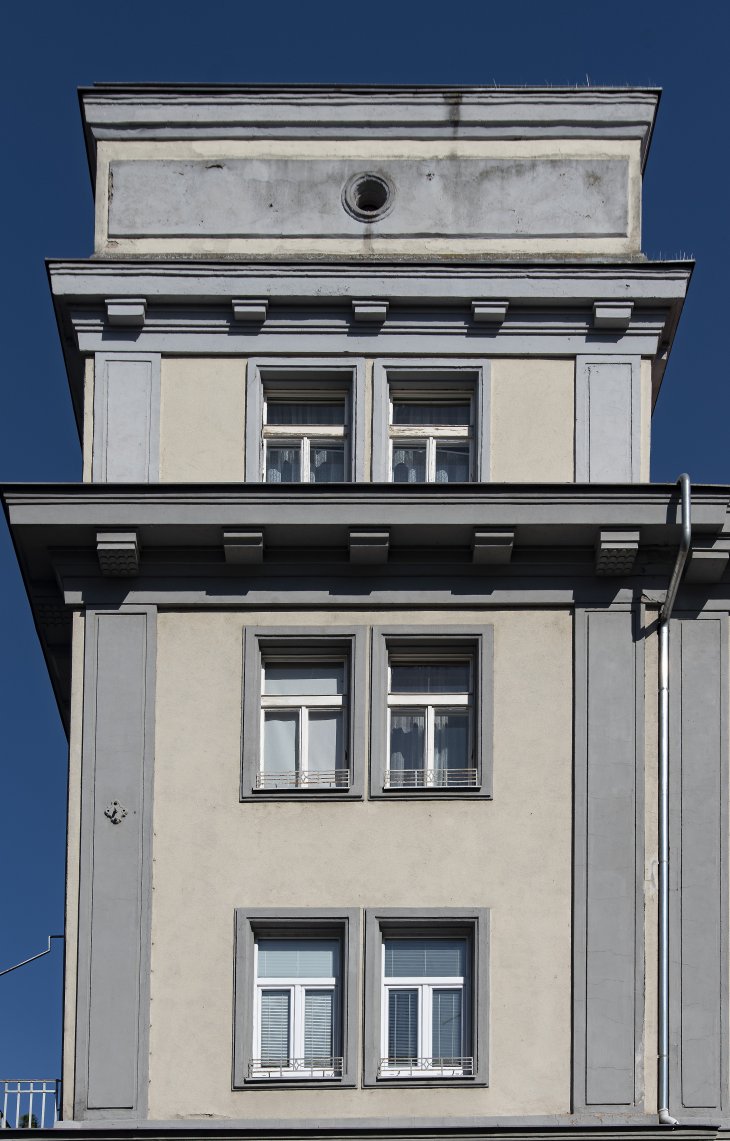 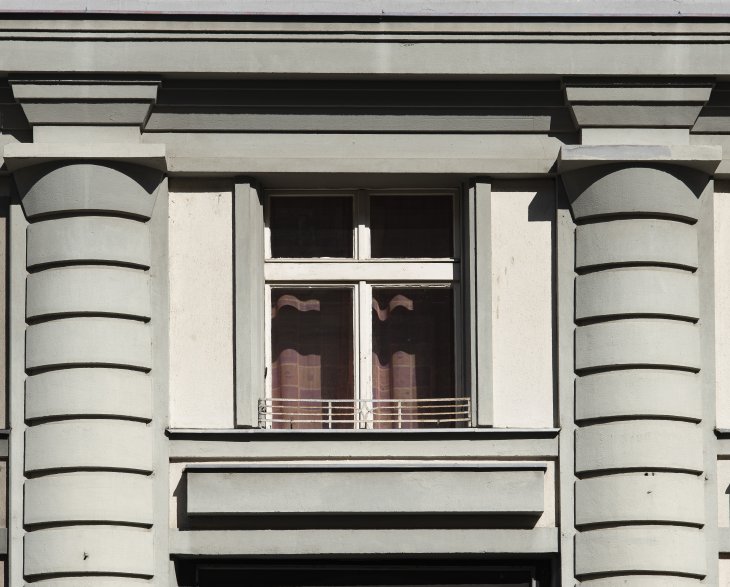 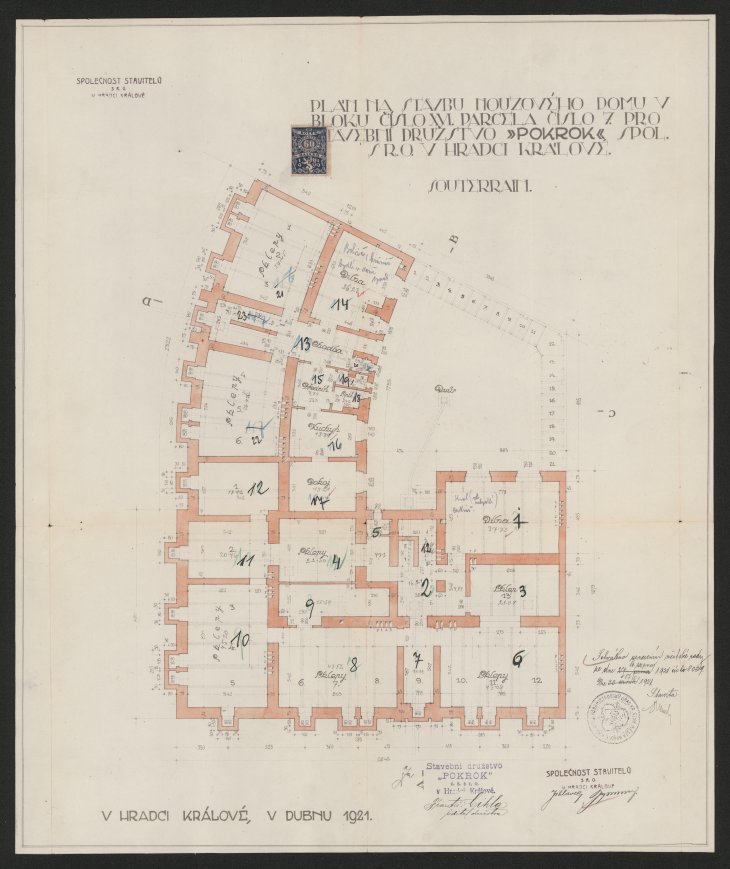 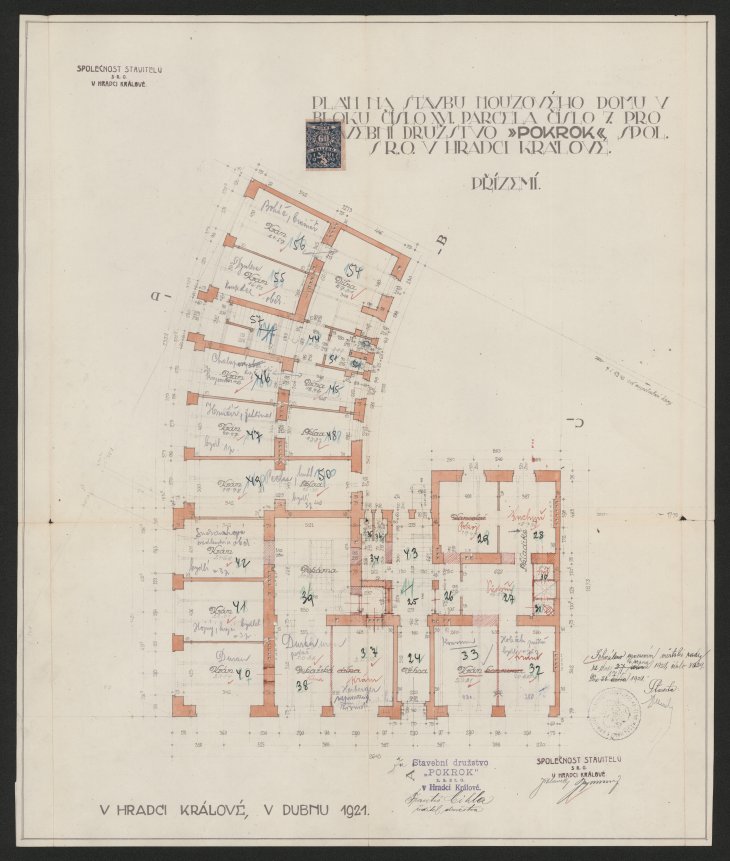 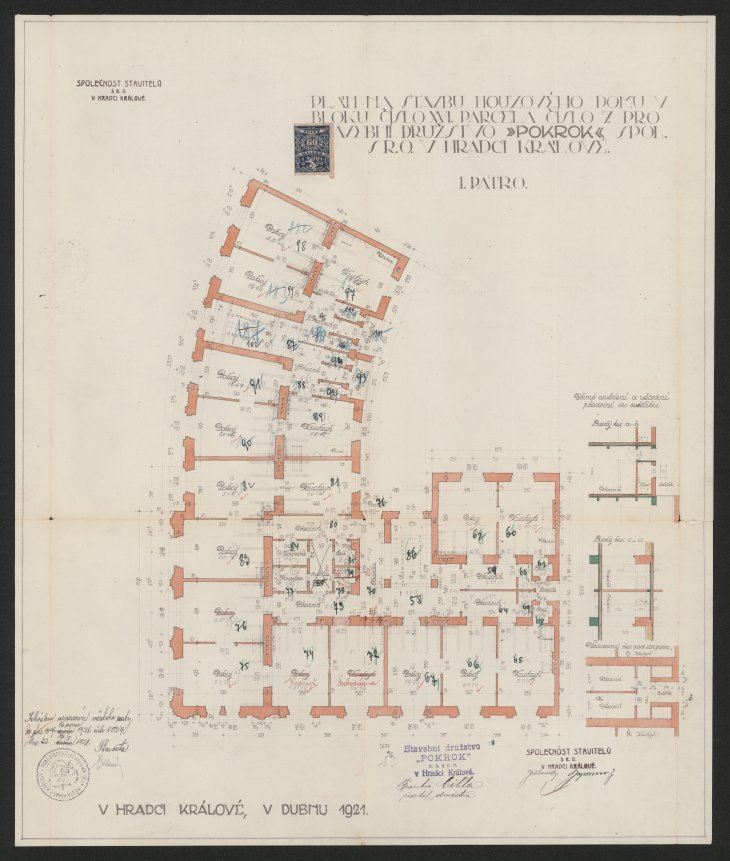 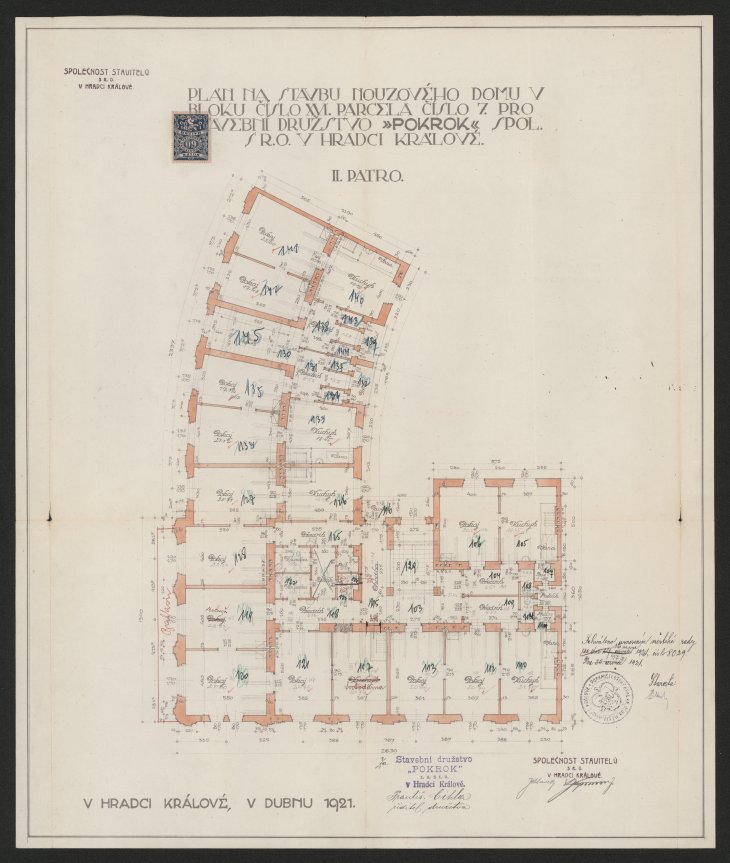 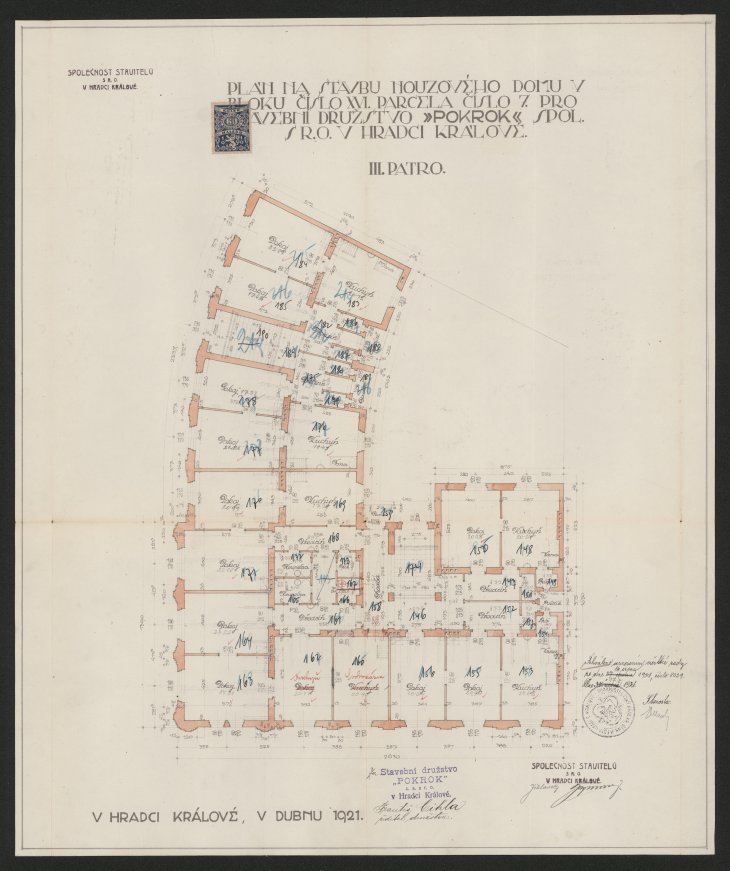 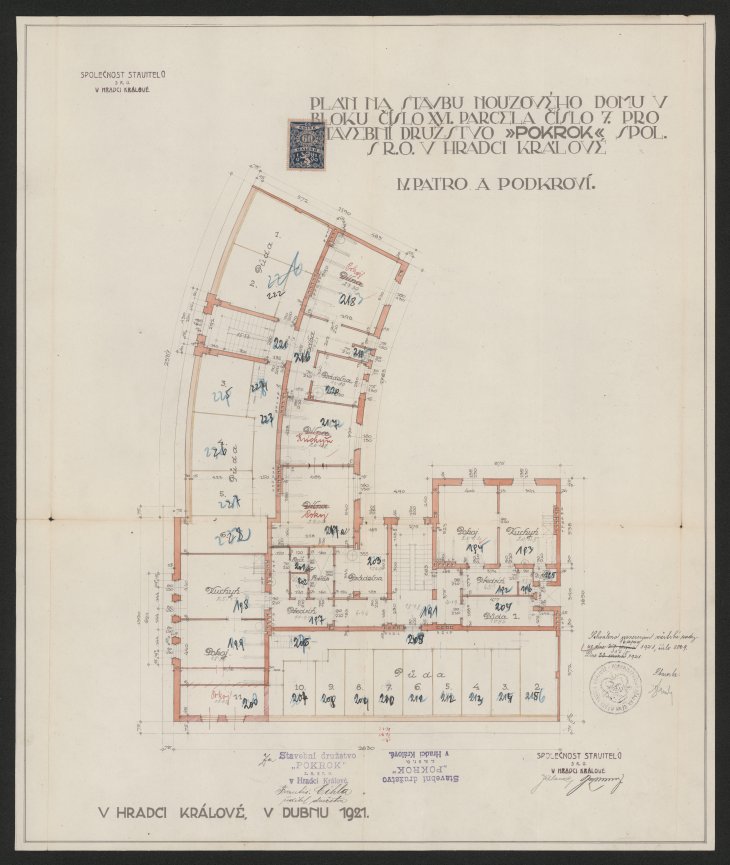 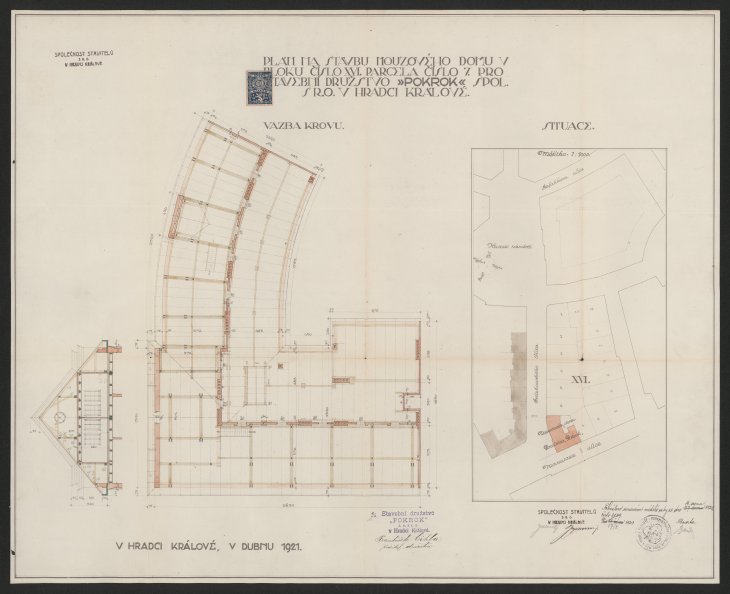 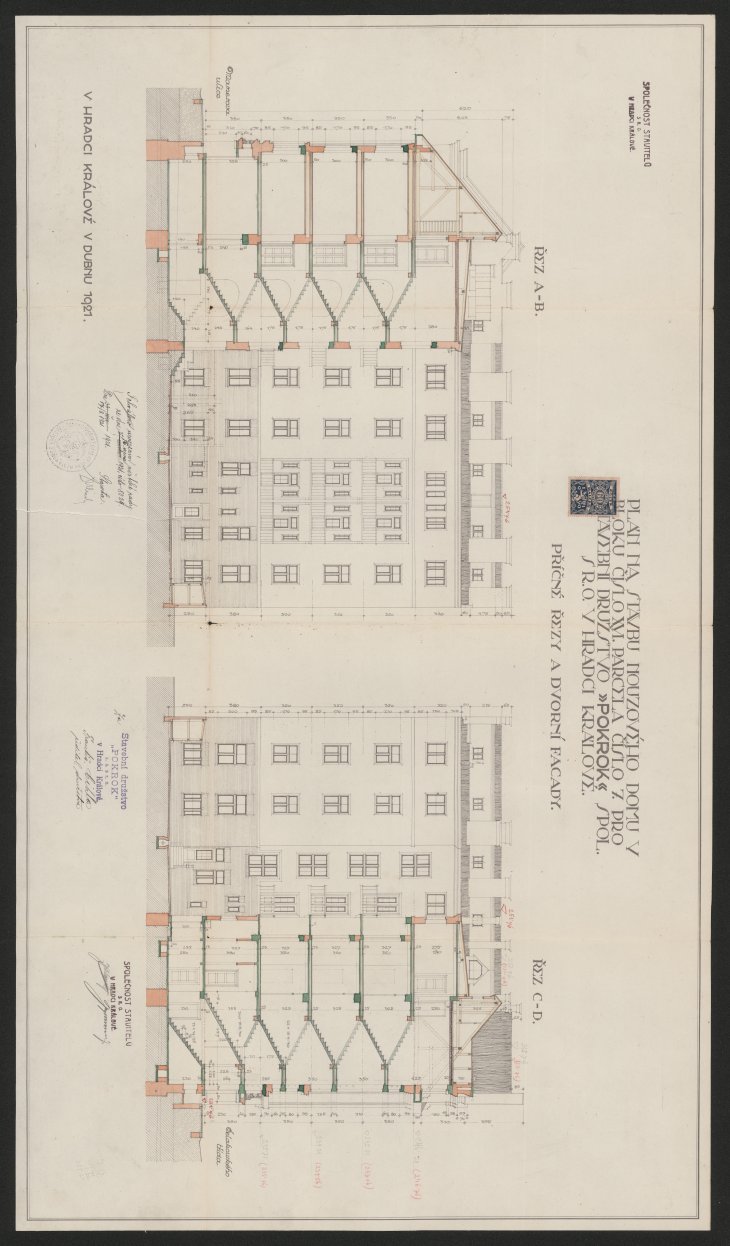