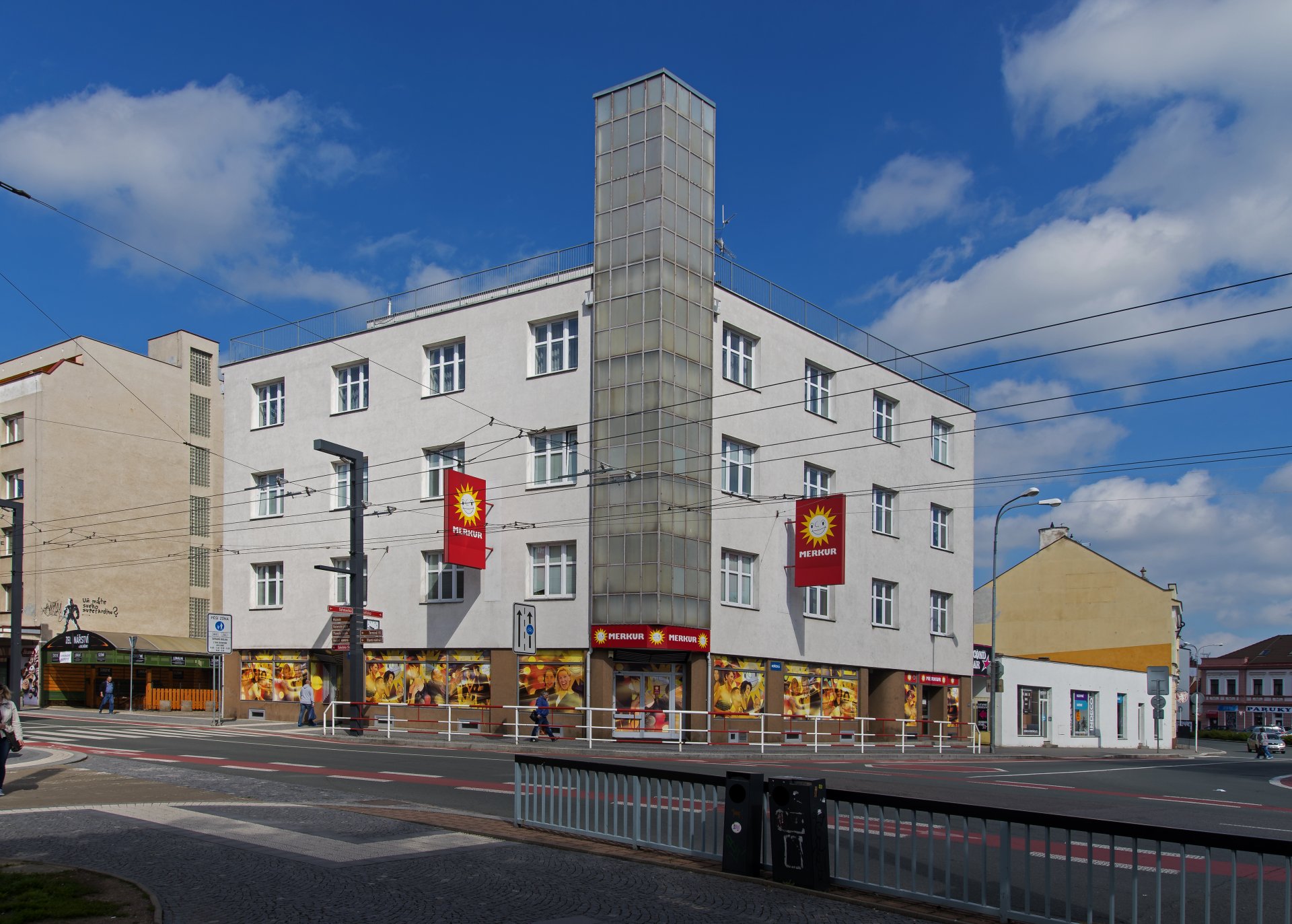 The house with a glass tower is located in Pražské Předměstí (Prague Suburbs) in Hradec Králové. It is also known as the Commercial and Residential House of the Vlček Company or the Vlček Glass Tower.

This building was designed by the local builder and occasional project architect Josef Fňouka, who "does not deny respect for progressive development". The purist residential and commercial house was called the "Glass Tower". It was designed for Karel Vlček, a trader and collector of the municipal spirits tax. The building was planned on the site of a former ground-floor house facing only what is now Dukelská Street; the courtyard and a separate building with a shop faced Hořická Street. The construction began on 9 March 1929 and was completed on 23 September 1929. The progressiveness and solidity of the new constructions is evidenced by the events of 2–6 July 1929 when Hradec Králové, and especially its Prague Suburbs, was hit by a strong storm. The storm seriously hit the surrounding houses; however, the scaffolding around the new building and the rough construction of Vlček’s house remained intact and no damage was caused to the building.

In the basement, there was a central boiler room and four premises serving as storerooms for shops. Each storeroom had a separate freight elevator from the street. On the ground floor, there was the commercial area with three standard shops, each consisting of two premises, a corner shop with an office, and a small shop. The layouts of the apartments on the first, second and third floors were identical. In the corner area, there were luxury apartments, each with walk-through rooms facing Dukelská Street, consisting of a bedroom, a living room, a dining room and a salon; the bathroom, kitchen, toilet, maid room and larder faced the courtyard. In the smaller apartment facing Hořická Street, there was a bedroom, a living room, and a dining room. Only the third floor included also a salon with an indoor winter garden situated in the corner glass tower. The salon was connected to the apartment facing Hořická Street, not Dukelská Street, probably on the request of the first tenants. The fourth floor mainly included a roof terrace with cement floor tiling and a smaller two-wing floor. In the wing facing Dukelská Street, there was a laundry room with a drying room; in the wing facing Hořická Street, there was a small apartment, probably a lodging apartment or the caretaker’s apartment with a toilet, a larder, a small room and a kitchen. At the corner, the rest of the building was exceeded by the tower with an irregular pentagon ground plan (even though the tower seems to be a regular quadrangle from the street).

In the commercial premises of the building, there many diverse products were sold, from liquors, punch, rum and wine of Mr. Vlček to food and electronics; there was also a specialised TV shop, and even a glass and porcelain shop. From 1 January 1934, the dental technician Bedřich Polák resided there. In the 1960s, there was a grinding collection centre and a repair shop for locks and keys of all kinds. Currently, there is a gambling room.

In 1933 the house was rebuilt to its present form according to the design by architect Václav Placák.

At the end of the 1980s, there were extensive demolitions in the surroundings of the house, where the Vítězný Únor (Victorious February) housing association was supposed to be established. It was supposed to be a complex of new apartment buildings with shops and refreshments on the ground floor. Eventually, the construction did not take place, and the house with a glass tower was saved. During the second half of the 20th century, the third proposal to demolish this remarkable building was discussed; however, the extensive renovation of Prague Suburbs never took place. The house is in original conditions. The former commercial premises were replaced by a gambling room and the façade was insulated with cladding panels.

No preservation has been registered. 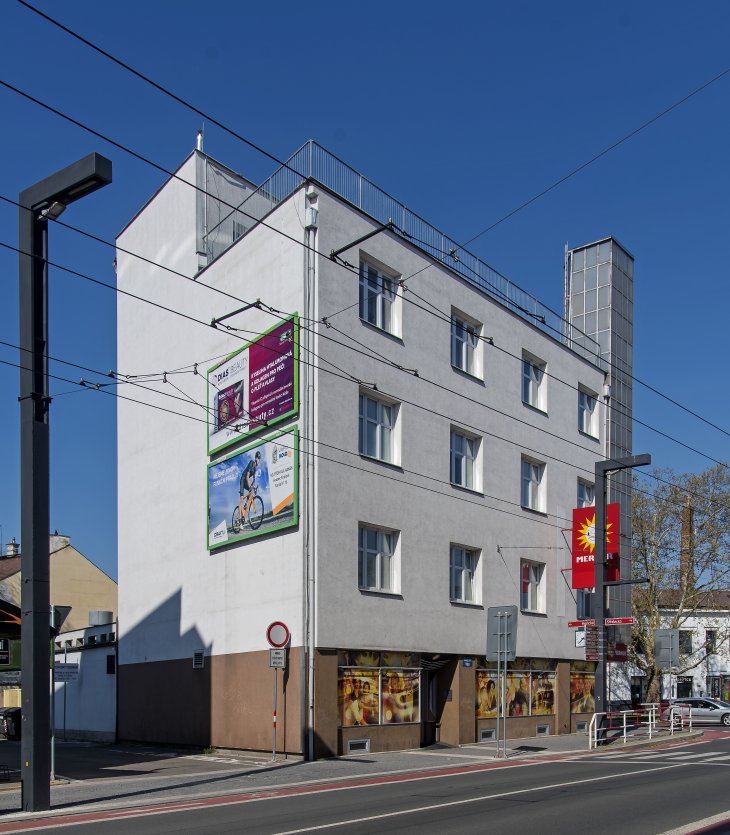 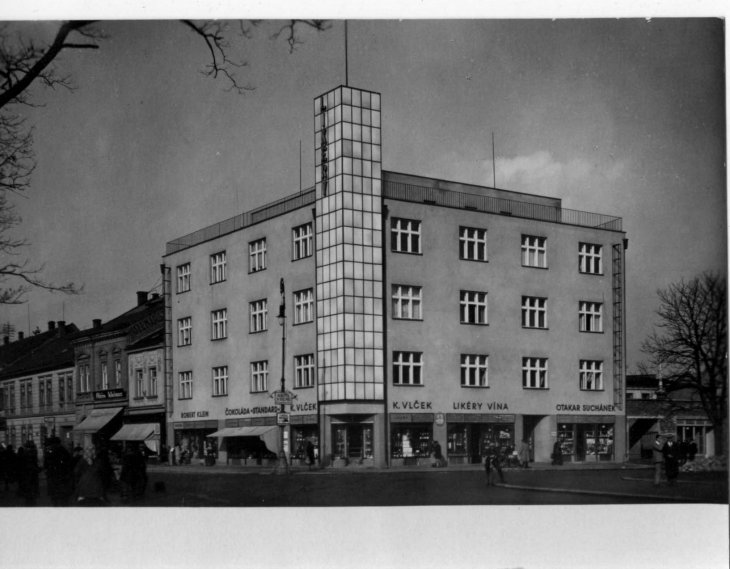