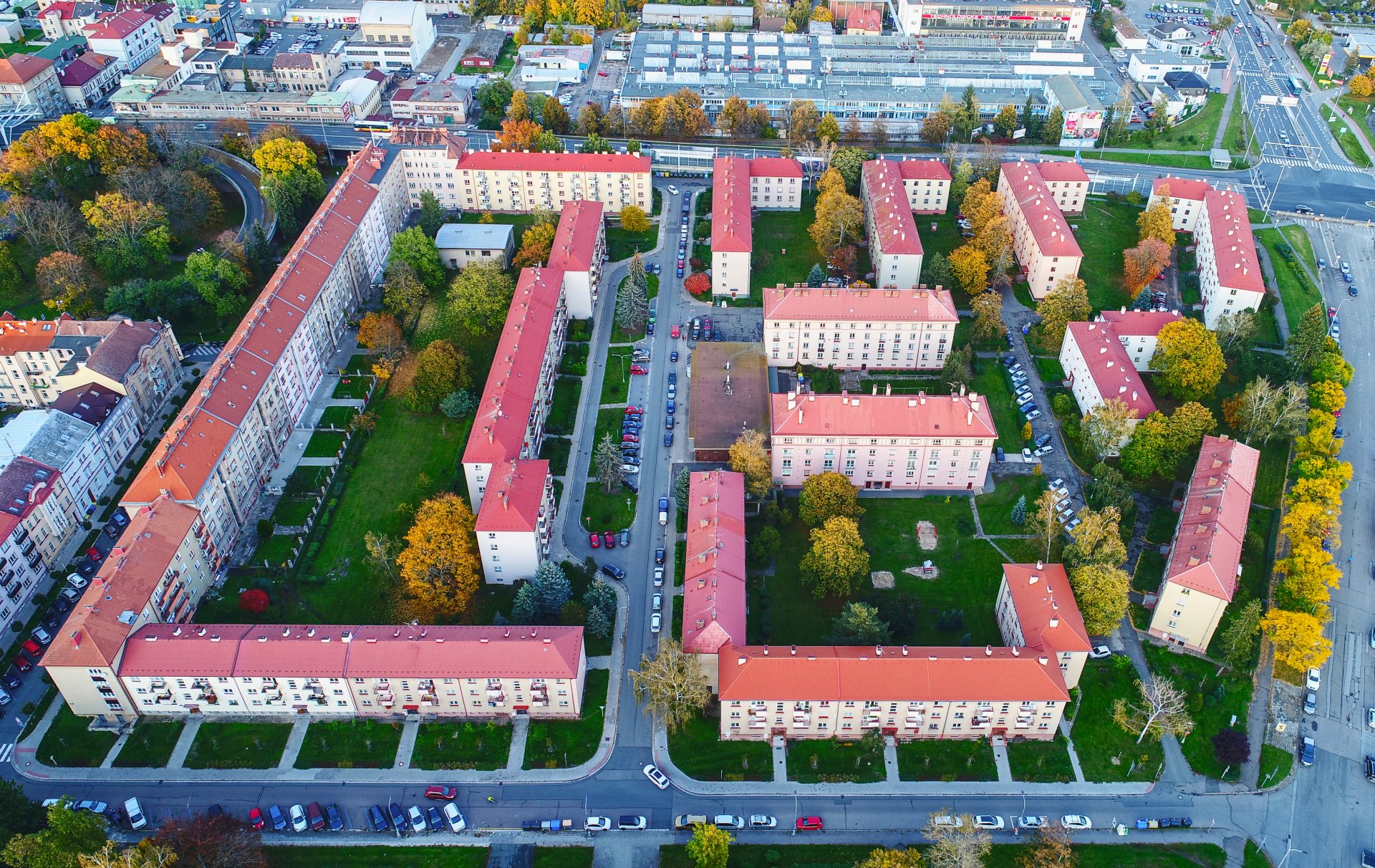 In 1942, a new organizational structure of “Greater Hradec Králové” was created that included neighbouring communities and cadastres. Thus, the population increased to 50,000 and so did the importance of the city as a political, cultural and economic centre of north-eastern Bohemia. The inclusion of the neighbouring villages and suburbs significantly increased the proportion of workers in the population.

Until 1954, housing construction was slow and did not exceed an average of 100 flats per year. In the second half of the 1950s, this number gradually increased to 350 flats per year. Due to its function and planned development, however, the city needed at least 700 flats per year. This disproportion led to a shortage of flats and the city registered 4,400 applications for flats in 1957.

Since the early 1950s, urban planning of Hradec Králové Hradec carried out by architects from Stavoprojekt (a national enterprise founded in 1948), namely Břetislav Petránek, František Křelina, and Václav Rohlíček. Between 1951 and 1954, they carried out new analyses and surveys of the city. Based on them, it was determined that the city would continue to expand around its historical core according to the interwar concept and the concept created by Josef Havlíček and František Bartoš between 1946 and 1947.

In the 1950s, the housing development took place virtually all over the city. The largest construction company of its kind built the Orlická kotlina housing estate designed by Václav Rohlíček between 1950 and 1958. The project included public facilities such as a nursery school and kindergarten, which may be formally regarded as the most advanced examples of socialist realist architecture that did not otherwise root in the city of Hradec Králové.

The housing estate includes a total of 420 apartments, a kindergarten, and a nursery school (originally designed as a school and kindergarten). The school buildings were designed by Jan Zídek, novice architect from Stavoprojekt, who was able to design some of the advanced projects (the nursery school and kindergarten of 1955) in a very remarkable abstract decorative form with interesting sgraffito fields above the entrances. Compared to similar complexes in Ostrava-Poruba, Havířov and Ostrov nad Ohří, the Orlická kotlina housing estate maintained a user friendly scale and sober decorative forms; socialist realism was reflected rather in the overall concept of a “closed, delimited and clearly defined spatial form”.

It was very important that the architects of the housing estate respected the continuity of the urban planning; even today, the estate has a good standard of housing and mass composition.

The architects clearly tried to link the housing estate to the courtyard system of the neighbouring streets and to parts of the city. The housing estate naturally fits in the surroundings and does not seem overly innovative.

More significant early features related to the aesthetics of socialist realism can be seen mainly on the two school buildings (the nursery school and kindergarten), central portals of the residential buildings (e.g. the front of the buildings in Bidlova Street), and the two solitary residential houses between Ladova and Skupova Streets (the pronounced ledges, simple orthogonal chambranles around windows, and similarly austere plastic façade, rhythmically decorating the top floor of the above-mentioned two buildings). Compared to other housing estates built in the industrial and mining regions areas of Czechoslovakia in the 1950s, the façades of buildings in this housing estate and their features (e.g. balconies) are strict and simple in the functionalist style.

Probably due to the increased groundwater level and closeness of the Orlice River, cellars and other facilities are located on the ground floor, not in the basement as usual.

The need to increase productivity in the construction industry led to gradual improvement of the traditional brick technology. During the construction of the housing estate, the flow system and the so-called Tencer’s frame for bricklaying were used.

Archival materials suggest that the walls of the blocks of flats were primarily built from conventional bricks. Prefabrication was used mainly for panel ceilings, stairs, doors, windows, and other type elements. It is also interesting to study the contemporary prices. For example, in the documents related to the construction of the corner double block of flats of the T 16 type with 27 residential units in Bidlova Street, dated 7 March 1958, the total construction costs were estimated at CZK 1,983,237. The average cost for one flat was then estimated at CZK 73,453.

Despite the fact that the standardization of the construction industry was still in its infancy, we can find a virtually identical nursery school, for example, in Prague. The nursery school was designed for 55 children.

Unlike the nursery school, the kindergarten building is still in relatively good condition (the hipped roof was renovated and the windows replaced). The interesting geometric façade decorations and the colourful graffito fields above the main entrance with a theme of children playing have fortunately survived.

Orlická kotlina is a relatively small housing estate. The four-storey buildings surrounded by rich strips of greenery are integrated into the urban organism. The environment slightly worsened in the 1970s when an overpass over Pospíšilova Street was built at the eastern edge of the housing estate (in 1978), which could not be approved by the building authority for excessive noise and pollution until 2008 when noise barriers were built.

The housing estate has not lost in quality. As architectural historian František Toman wrote in his book of 1985, one can appreciate the smaller scale of the buildings, the pleasant living environment, and the good integration into the urban organism.

Today, the semi-open courtyards are complemented with mature trees and landscaped surrounding greenery, lawns, and playgrounds.

The reconstructed façades of most buildings do not differ from the original plaster of the 1950s.

The Orlická kotlina housing estate is part of the protected urban conservation area in Hradec Králové. 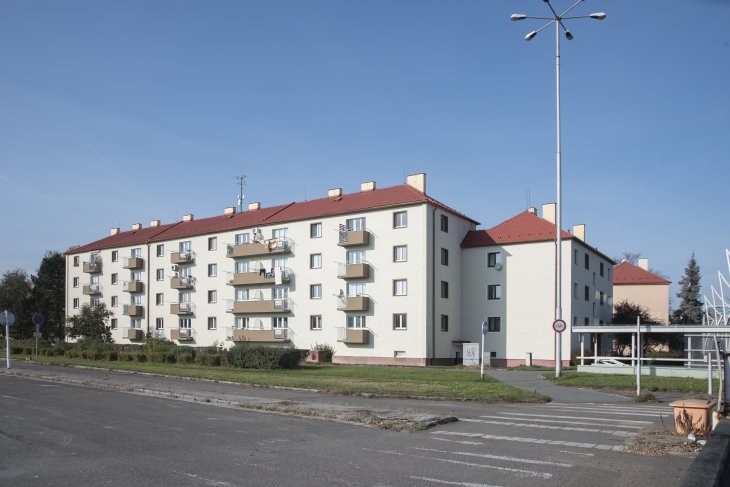 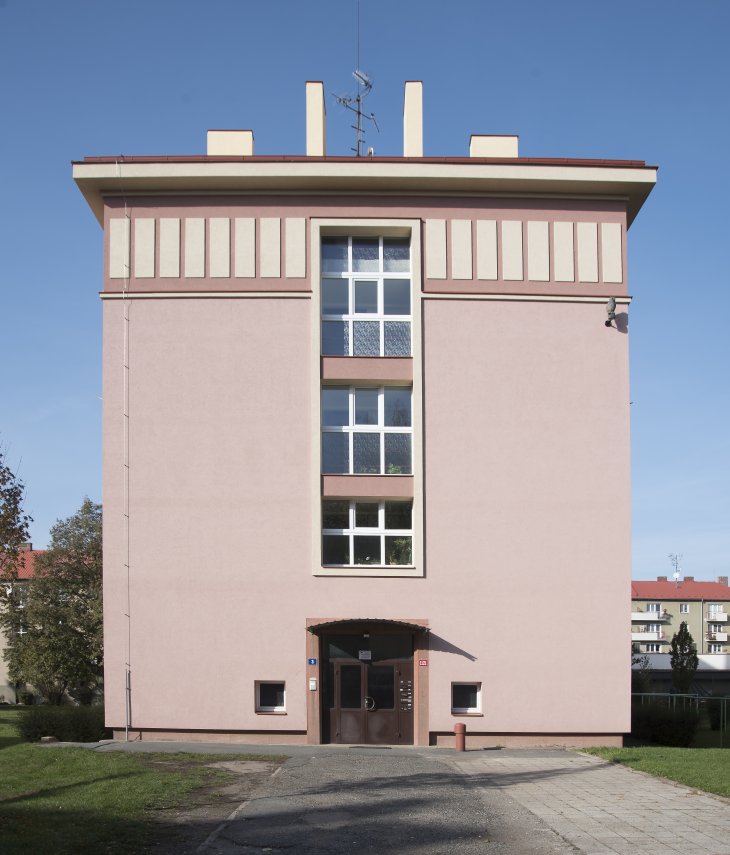 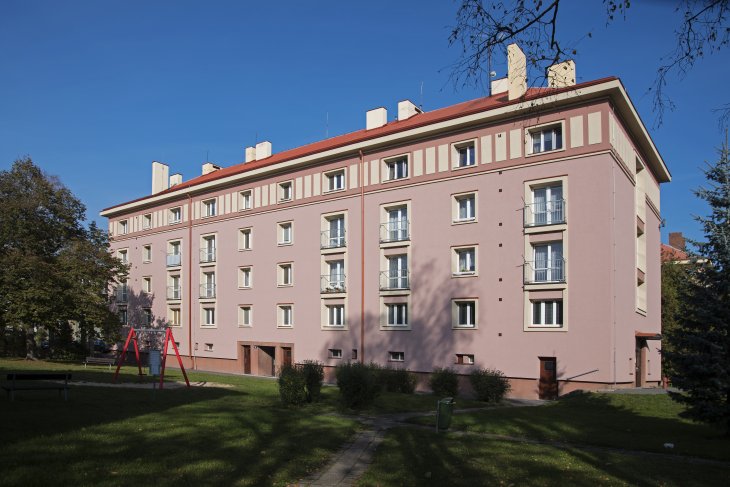 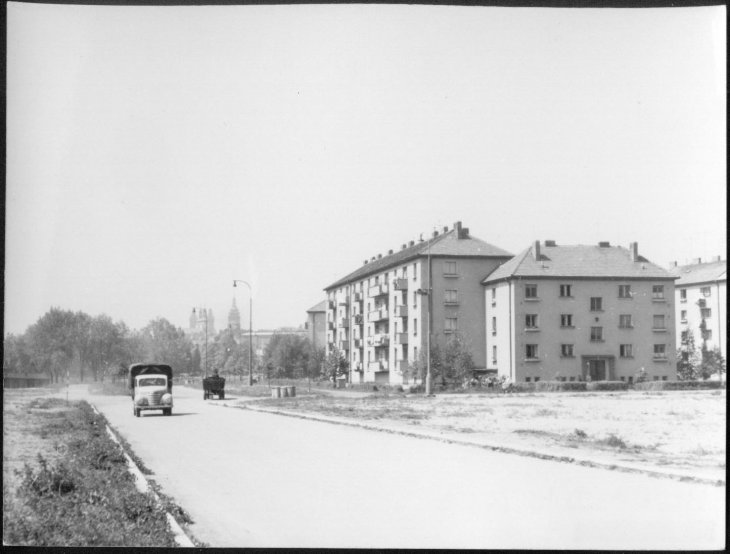 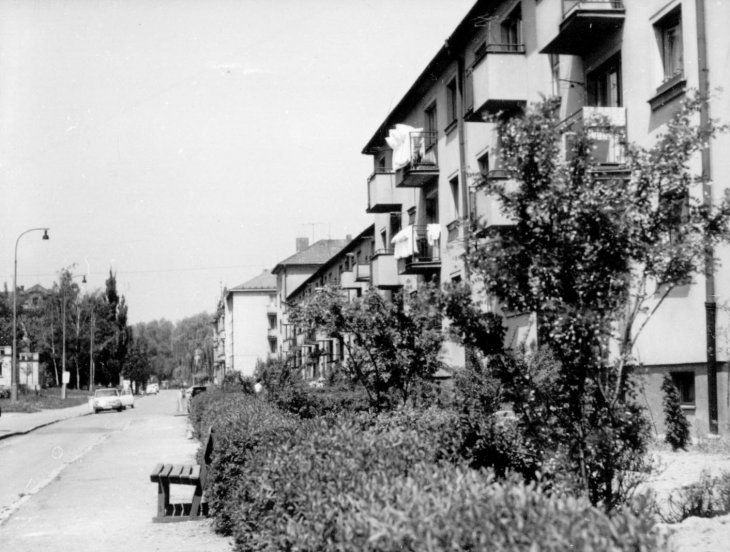