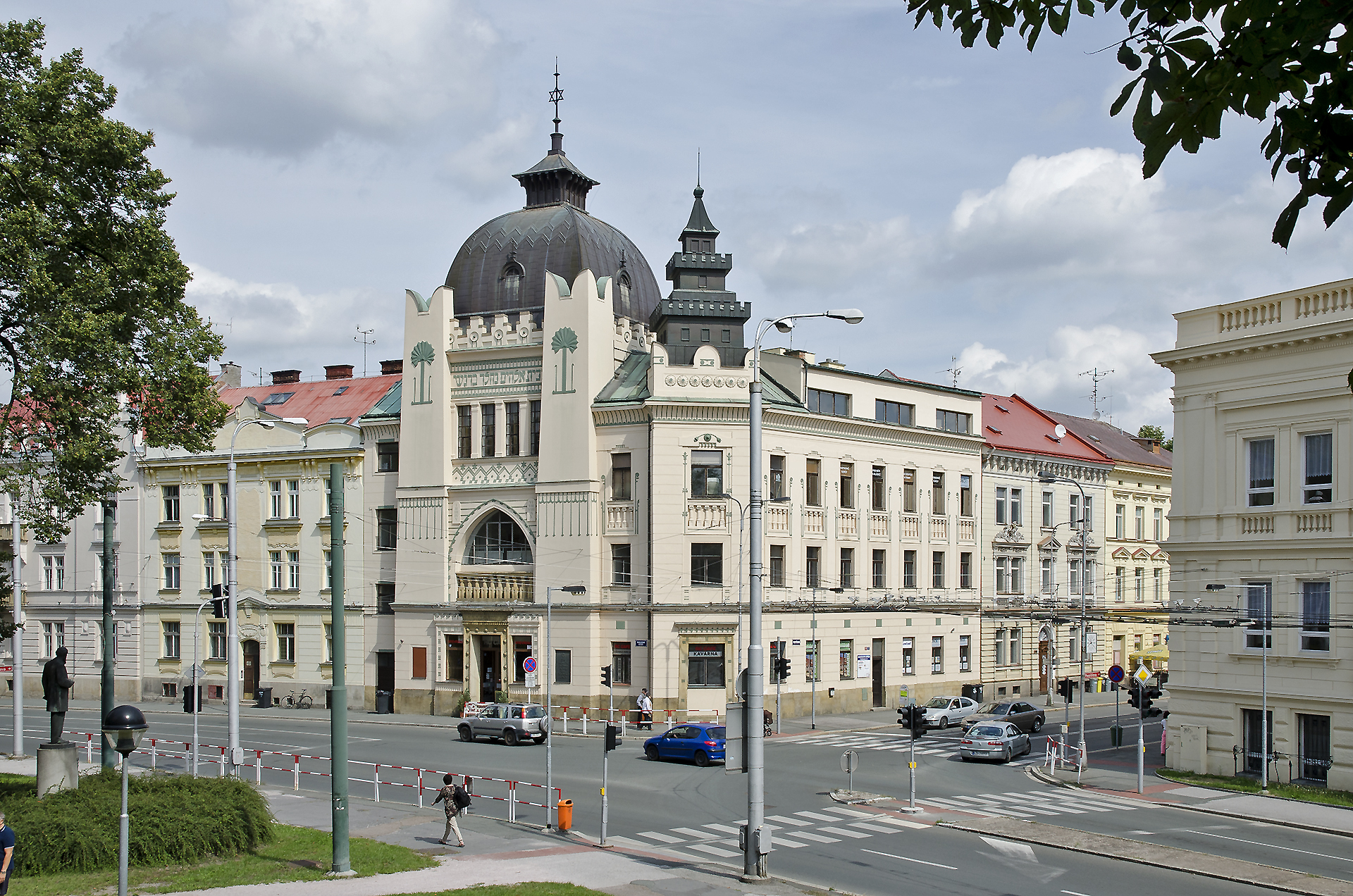 The Jewish religious community in Hradec Králové flourished since the Jewish emancipation in the late 19th century. Its members first used to meet in several buildings in the Old Town until they found refuge in the building no. 67 in today’s Rokitanského Street. There was probably a wooden synagogue in the yard, designed by Viktor Weinhengst, and offices and a Jewish school in the house. Soon the premises were not sufficient and the community planned to build a new synagogue. The story of the construction of a new synagogue in Hradec Králové began on 15 January 1903, when the chairman of the Jewish community in Hradec Králové, lawyer Josef Tausik, asked the city for a plot of land: “...but it is the rule that municipalities donate construction sites for church purposes – even for synagogues – for free.” This request, however, was not granted and the land had to be bought under the sales terms for the former fortress property issued on 4 December 1893. Josef Tausik approached the Jewish communities in towns where synagogues, which he saw as good examples, had been recently built, namely in Dobříš, Tábor and Čáslav. In the spring of 1903, Václav Weinzettl received the plans of the Čáslav synagogue. In the autumn, he was officially awarded the contract that Ludvík Domečka and mayor František Ulrich congratulated him on through Josef Tausik. Weinzettl worked on the project until March 1904. He liked the selected construction site and appreciated the obtuse corner of the plot, which was, according to him, “one of the best urban construction sites”. On 25 April 1904, the project was approved by the city council; just two days later, a public notice asking craftsmen and builders to offer their quotes was published in Osvěta lidu magazine.

The construction started on 17 June 1904, when Weinzettl took over the excavation of the foundations. Originally, the construction was to be completed in 1904, which, however, did not happen. The construction continued also in 1905 and the final invoice was submitted by Weinzettl just before Christmas. Some invoices were not paid until 1907, when the community paid builder Karel Šťastný whose invoices were disputed several times because he failed to meet the offered budget.

The completion of the synagogue and the consecration ceremony on 24 September 1905 was reported only in Ratibor magazine. Osvěta lidu did not even mention the new building because it probably was not in favour of the Jewish minority, and it even accused Ratibor that “it always smells of a lack of Czech awareness”. Ratibor suggested that the synagogue stood on a historic Jewish site because a Jewish school used to stand in Kavčí plácek Square opposite the building already in the 14th century.

The magazine reported that the new synagogue was one of the most beautiful buildings in Hradec Králové and the consecration ceremony was an unusually important event, attended by “representatives of the municipality, district, all government authorities, schools, officer corps and a number of non-local guests”". The sermon was held by Rabbi William Klauber who replaced Abraham Kohn, who died in 1905. “The speech was rich in ideas, loudly and nicely was presented so that everyone present liked it,” wrote Ratibor. Many rabbis and prominent Jews from all over the country congratulated the community on the opening of the new synagogue. For example, Rabbi Dr. Steinreich from Mladá Boleslav wrote: “The new prayer room will be a meaningful memorial to the dedication of our brothers and future generations.” The importance of the event was summed up in another greeting: “The tabernacle shall uplift Judaism and its confidence in the city.” After the eternal light was lit and the Torah stored, a prayer for the Emperor and the final chorus followed. The consecration of the synagogue was also attended by Václav Weinzettl who said he would “come with his wife”. Ratibor promised to pay more attention to the new synagogue premises in one of the next issues; this, unfortunately, never happened. The contemporary press primarily dealt with the growing economic crisis and the struggle for universal suffrage, which culminated in a general strike; the covered local topics included the regimentation of prostitution in the city.

The north-east wing of the synagogue, facing Pospíšilova Street, included an office, the rabbi’s flat, accommodation, and a room for religious lessons. The north tract, facing the courtyard, contained a large prayer hall and a winter prayer room upstairs.

Given the character of the impressive and promenade ring road, the main front faced the Old Town. The façade had two symbolic conic pilasters extending from the ground to the dome, allegedly inspired by the façade of the Temple of Jerusalem. On the pilasters, there are two decorative symbols, perhaps resembling palm trees, symbols of renewal and fertility, which also refer to the temple. Before the recent reconstruction, the symbolism and ornamentation on the façade was much richer, more sophisticated and with golden contours; today, the symbols of palm trees are not as visible as in historical photographs. On Jewish tombstones, palms were also represented by the oak of crying (Alon bachut), a favourite symbol at the turn of the 19th and 20th centuries. Between the pilasters, there is a richly decorated portal and a window in a pointed arch upstairs. In the strip above the four window parts on the second floor, there is a Hebrew inscription, “You will come to the house of the Lord with jubilation”. The dome is built on the high conic pilasters and reminds of buildings owned by Sudeten industrialists. The corner is closed with a chamfered tower with multi-level battlements. Originally, there was an entrance portal bounded by two Egyptian granite columns and two lights with ball caps were designed to be placed on them; later, the entrance was closed and now, one of the pillars can be found in the collections of the Museum of East Bohemia. The façade of the north-east wing is less ornate than the main façade. The rich ornamentation of both the exterior and interior suggests that architect Václav Weinzettl and the contract owner Josef Tausik were inspired by exotic forms.

The surviving invoices for the seats prove that the synagogue used to be almost fully occupied since the beginning. The seats for the lower part of the synagogue were supplied by carpenter Mr. Militký from Hradec Králové; the seats in the gallery by carpenter Mr. Hlavatý. The locksmith work was performed by Jan Rabas, a renowned locksmith who later worked, for example, on the museum project designed by Jan Kotěra. The organ in the gallery was produced by Jan Tuček from Kutná Hora whom Weinzettl probably met at the Jubilee Exhibition in Hořice in 1903, where Tuček chaired the music committee.

The murals were made by decorative painter Rudolf Tomášek from Hradec Králové according to Weinzettl’s instructions. Weinzettl designed the murals for the Great Prayer Hall; the winter prayer room and the vestibule were decorated by Tomášek “in a simple and elegant way, both in gold” and according to his own invention. The murals were renovated in 1936.

The altar with massive candlesticks on the sides was designed by Václav Weinzettl in the spring of 1904. After World War II, when the Great Prayer Hall was divided by partitions and its equipment was dismantled, the edicular altar and two benches were sent to the synagogue in Rychnov nad Kněžnou, where the altar was adjusted on a smaller scale and later renovated, and where it has been to this day.

According to contemporary inventories, there were a lot of very valuable items in the synagogue, often donated by prominent Jews, including furniture, liturgical textiles (e.g. seat and liturgical cushions) and items made of precious metals – cups, candlesticks, bells, etc. In 1935, for example, Otýlie and Leo Tausig donated nine prayer books to the synagogue, specifically asking them to be stamped by the Association of Czech-Jews. In the same year, they donated an expensive liturgical cup on the occasion of their son Jaroslav’s marriage. Leo Tausig later told the rabbi that the cup should be used only for the most festive occasions.

Between 1905 and 1939, minor refurbishment and changes were made, for example, electrification, the introduction of electric heating in the hall, and regular repairs of the organ by Jan Tuček’s company.

Kateřina Slabá, who wrote a bachelor thesis on the synagogue, believes that when the synagogue was taken over by the Germans after 1939, there was a plan to demolish the building. During World War II, however, the synagogue served as a warehouse for confiscated Jewish property. After the war, there were several attempts to revive the Jewish community in Hradec Králové and the synagogue briefly served its original religious purposes, but after 1950, the very small community ceased to exist. In 1968, the dilapidated building was purchased by the State Scientific Library and reconstructed for its own purposes. The library was open at the beginning of 1971. During the reconstruction, the main prayer hall was divided by two floors; the other rooms have been adapted to book stores or offices. In 1998, general reconstruction of the roof took place and a new finial with the Star of David was added. In 2006, the exterior was reconstructed, but the original ornamentation has not been fully renovated. However, the decorative elements, which had to be of one shade all over the façade in 1971, were highlighted.

The synagogue is an immovable cultural monument No. 15658/6-4541, registered on the Central List of Cultural Monuments of the Czech Republic (ÚSKP) and part of the protected urban conservation area in Hradec Králové. 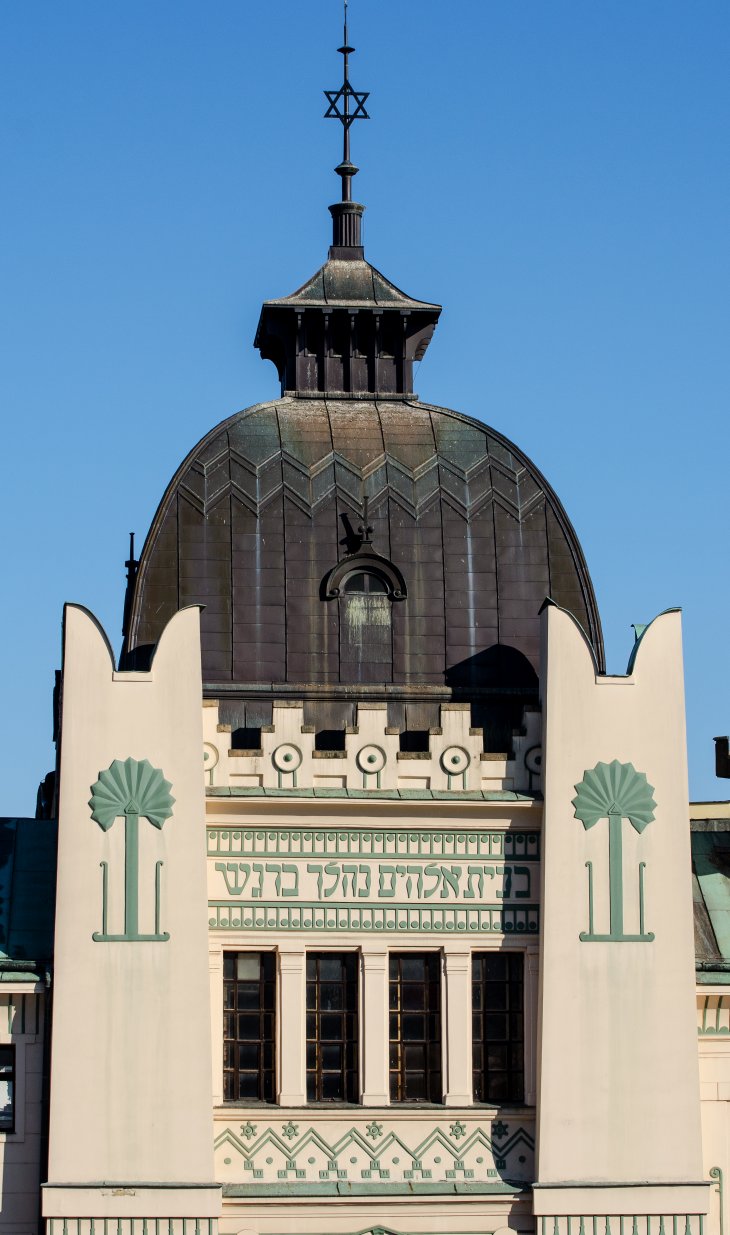 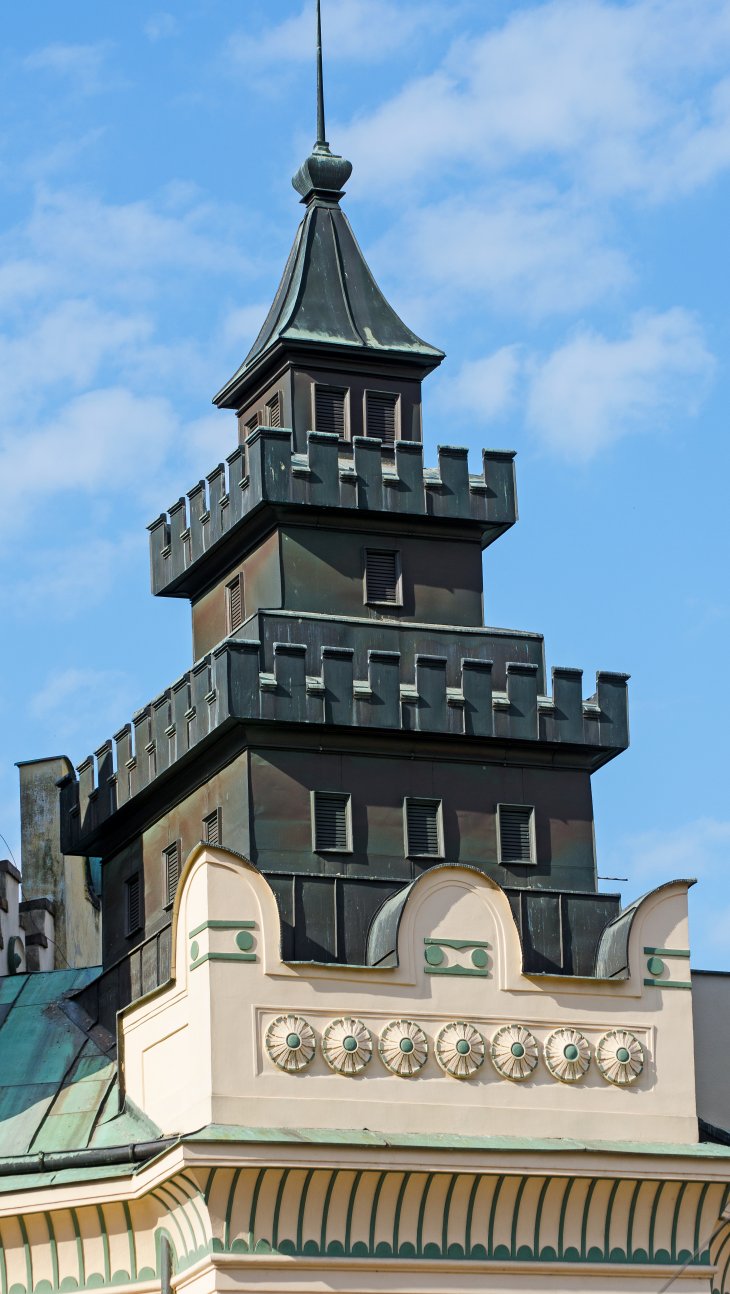 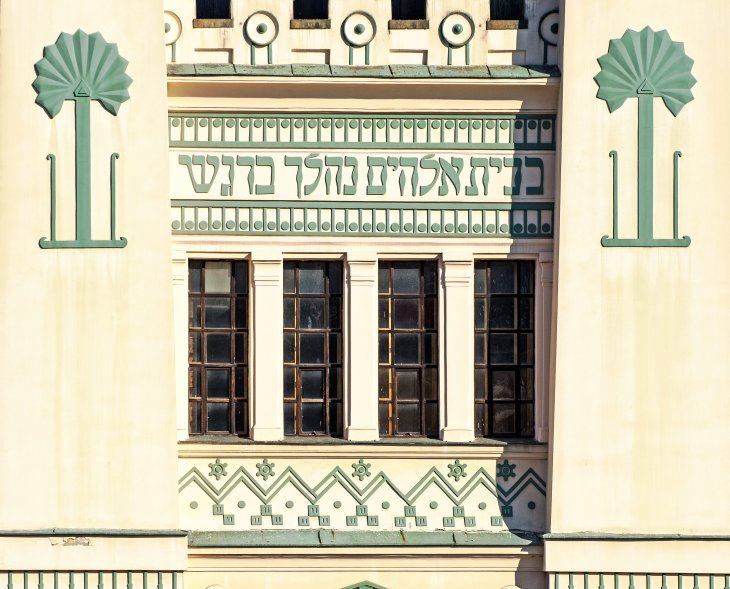 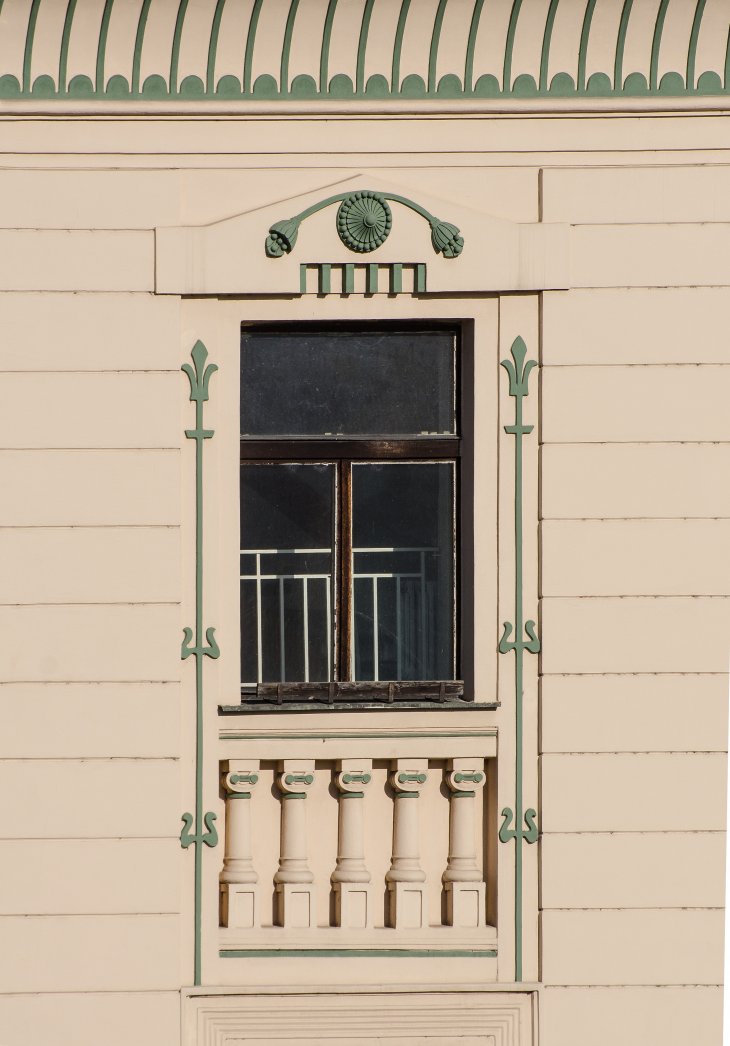 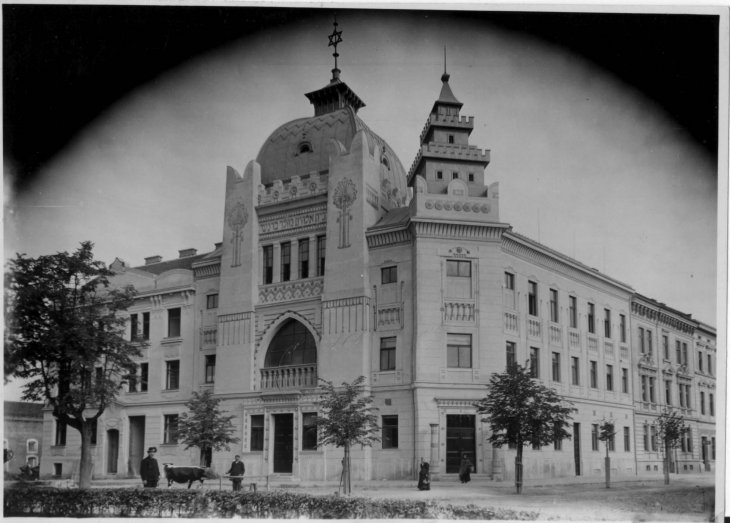