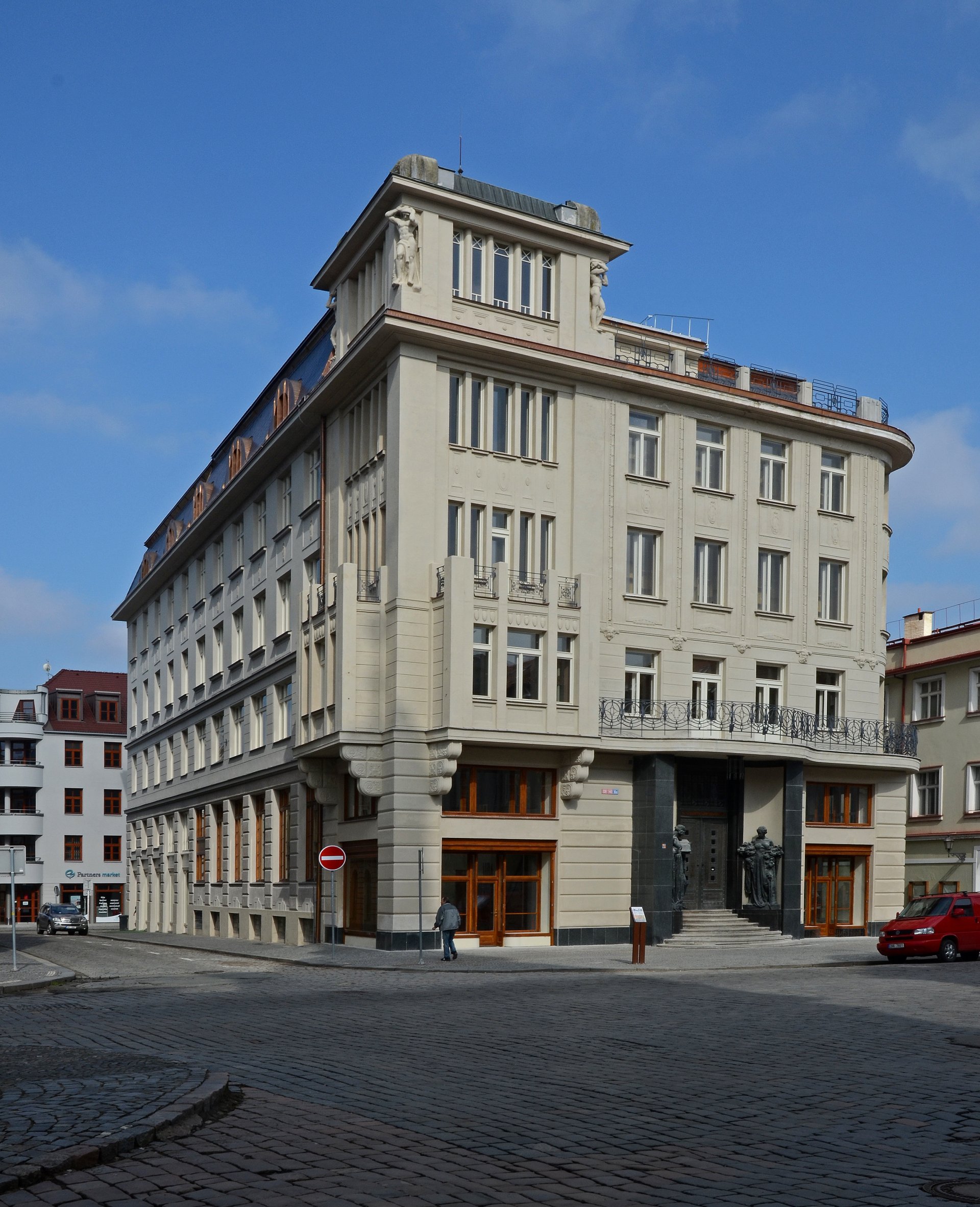 The Credit Union resided in the city since 1868 and had only three or four clerks. Shortly before the construction of a new building, their number increased four times. Thus, a local bank changed into an institute employing a large number of clerks who dealt with an ever-growing agenda. The idea to build a bank palace came from the General Pension Institute in 1910.

The first architectural design was highly appreciated both by professionals and citizens. In the competition, the architects were asked to design a bank palace with a tenement house in the rear wing and shops on the ground floor. 13 designs were submitted in June 1910, and the winning historicist competition was designed by architect Viktorin Šulc (Schulz) of Pilsen. The competition jury included, for instance, architect Kamil Hilbert. The design by architects Oldřich Liska and Vladimír Fultner was placed second. At the end of 1910, the growing Credit Union bought a plot from the Pension Institute to build the palace with a tenement house in the rear wing. The new investor, however, refused the previous competition results and announced another, short-listed competition. Architects Osvald Polívka, Oldřich Liska and Josef Novotný, and later Jan Kotěra, were asked to participate. The palace was built according to the design by Osvald Polívka in 1910–1912. Jan Kotěra noted that “Ulrich’s influence in the local private sector is not unlimited, and he has experienced failure for the first time in Hradec Králové.”

In 1910, the Credit Union asked local builder Josef Novotný to demolish Caivas’s houses on the chosen plot of land. In April 1911, the city council approved the construction of a three-storey building. The building permit for the building was issued on 10 November 1910. The construction was carried out by Václav Nekvasil stavební a.s. company (led by Otakar Nekvasil) of Prague – Karlín. The rough construction was to be finished in two months and stay without plaster through the winter. As early as on 30 September 1912, the clerks moved to the new palace. The front façade was made by local company Klumpar & Comp. The building is made of bricks and reinforced concrete beams, ceilings and columns.

Osvald Polívka designed three floors and and elevated ground floor in the front of the building. On the corner, he placed his favourite motif of a tower prismatic corner, the most distinctive part of the façade. He significantly reduced the morphology, and the decorative features include only sculptures, forged balcony railings and masks. The façade is divided by vertical stucco strips of egg and tongue, ending in masks on the first floor. On the façade, the architect accentuated the verticality and asymmetry, and by reducing the features, he reached flatness and Kotěra’s modern style with pure Art Nouveau. He replaced the Art Nouveau organic style with the classicist contrast of plaster colours and used some historical features, taking into account his conservative clients – a Dientzenhoferian staircase and baroque sculptures at the entrance.

The façade was decorated with two bronze statues by Jan Ladislav Šaloun who previously worked with Polívka in Prague. The bronze sculptures of 1908 were brought to the city in early October 1912. The male figure in Slavic clothes represents Countability (accounting); the female figure with fruit is an allegory of Fertility. Traditionally, the figures are called Trade and Harvest. The statues of atlases on the tower corner were created by František Fabiánek in 1912. Two atlases with dogs represent Vigilance; the third one with a beehive embodies Thrift.

The rooms at the front of the Credit Union belonged to the bank. On the ground floor around the lobby, there were exchange offices, cash desks, and deposit counters. “From there, you could also enter safes-depots, built by Wertheimer in the most modern way.” On the first floor, there was the director’s office, the board meeting room, the incumbent board member’s room, the correspondence and exchange departments, the Coal Headquarters of the sales office of the Joint East Bohemian Brickworks, and the department for the sale of cement, plaster and machine oils. On the second floor, there were accounting departments, offices and the office of the director of the Discount Company branch. The third floor housed the control department, discounting bills department, district information department, auditors’ offices, the telephone exchange, and the dispatch office. Under the roof, there were archives in fireproof rooms. Next to the main entrance on the right, there was a side entrance; upstairs, there were the managers’ offices. The building also included a number of waiting rooms and special exits. The three-storey object of the bank had cellars as well.

The display windows facing the front were of a functionalist character. The geometric windows with glass rounded corners had retractable awnings with advertising signs. In the shops facing the square, there was Bohdan Melichar’s bookstore and publishing house; on the second corner, there was Jaroslav Malíř’s fashion house. Since 1913, there was a permanent exhibition of machines produced in local factories on the ground floor. The first exhibitor was the local car factory, KAN.

The entrance hall ceiling, skylight and staircase windows had stained glass, probably designed by Osvald Polívka who also designed stained glass decorations for other projects. The most common motifs include birds, flowers and vases. The brightly coloured stained glass is stylized and geometric. The original lighting fixtures in the hall and exchange offices and on the first floor were produced by Franta Anýž’s company. The original wrought balcony lattice, windows lattice and railings have survived. On the large balcony railing on the first floor, there was an inscription in forged circles “Záložní úvěrní” (Credit); on the balcony cornice, there was the word “ústav” (Union). The stone decoration – the marble tiles and geometric mosaics, the marble fireplace and the plaque in the first floor waiting room – have survived. The most preserved rooms are the entrance hall, the director’s study with the office, and the first floor waiting room.

The unrealized palace projects (just as the one designed by Polívka) exceeding the square cornice caused protests of the owners of nearby houses and experts like Jan Kotěra, local scholars, medical expert Otakar Klumpar, and conservator Emanuel Pippich. The Club for Old Prague asked the city council “to take a stand to protect the nature and whole of the square”, typical for its two-storey horizontally divided buildings without avant-corps. New houses such as Špalek’s department (on the opposite corner) “did not match the historical sights”. Věstník Klubu za starou Prahu (The Journal of the Club for Old Prague) published an extensive article on Hradec Králové and unsuitable projects of new buildings in the historical part of the city.

Jan Kotěra, who did not agree with the winning project by Šulc, recommended a new project with regard to the height transition between the houses. He sent the Credit Union a sketch that was then sent back because “it would be hard to carry out according to several experts”. Šulc commented on Kotěra’s design by saying that the “inner layout of the building… was impossible”. Above the archway, Kotěra suggested the height of just one floor to make the height transition inconspicuous. The ban on high-rise buildings in the square would not delay building activity and “it would be more appropriate to admit the construction of three- or four-storey houses... but a graceful connection should be taken into account”. From the beginning, Kotěra was interested in designing the building. When he visited the city, he often monitored the construction of the Grand Hotel and the museum. In his correspondence with Mayor Ulrich, he asked for more information and documentation. In 1911, he designed the project and plaster model of the Credit Union in a neoclassical, serious and understated style. His efforts, however, were thwarted by the Prague headquarters of the Union in 1911. The reason why Kotěra, a popular architect in Hradec Králové, was not chosen and why a new competition, won by Osvald Polívka, was announced by led the district committee is a mystery. Perhaps it was because Polívka was popular in Prague where he worked on many projects, or because he designed palaces for financial institutions and had contacts among politicians and financial leaders in Prague.

The constructed building designed by Polívka aroused similar reactions like Šulc’s project because of its height. Writer Rudolf Medek complained that the square was cruelly disfigured and the rooflines of the new buildings were “violently broken and elevated” in three places. He described the Credit Union building as the “ugliest building in Hradec Králové”; to Medek, Polívka was “quite a tasteless decorator” and his façade was strikingly similar to the neighbouring Špalek’s department store (designed by Vladimír Fultner and Oldřich Liska in 1910–1911). The building also has a very close relationship to Polívka’s Trade Bank in Trieste, especially the façade and Šaloun’s sculptures.

As for craftsmanship, the locals were quite happy about the new building. In artistic circles, however, Polívka was not popular and his project in Hradec Králové was criticised. “The loss of sense of scale on the whole and in detail in the practitioner of such importance and skilfulness is surprising, especially where he meets the new needs of the times.”

In the 1980s, original marble and wood partitions in the hall were removed to open the space. The building was the seat of ZZN (Agricultural Supply and Purchase), the Association of Cotton Industry and the ČSAD bus company. After 1987, it was transformed into the Museum of the Labour Movement that resided in the building for over a year.

Since January 1990, the building has been the seat of the Gallery of Modern Art. In 2014–2016, the building underwent extensive renovation when the construction work done in the past was removed and the artworks and interior decorative features (furniture, hardware, lighting, etc.) were renovated. The valuable embossed wallpapers were restored as well. The reconstruction of the third floor (to make the exhibition of modern art more open) significantly affected the original character of the interiors. The partitions were removed and former offices with the walkway along the skylight above the lobby connected to create an open space. In the skylight above the lobby, air-conditioning was inappropriately placed. 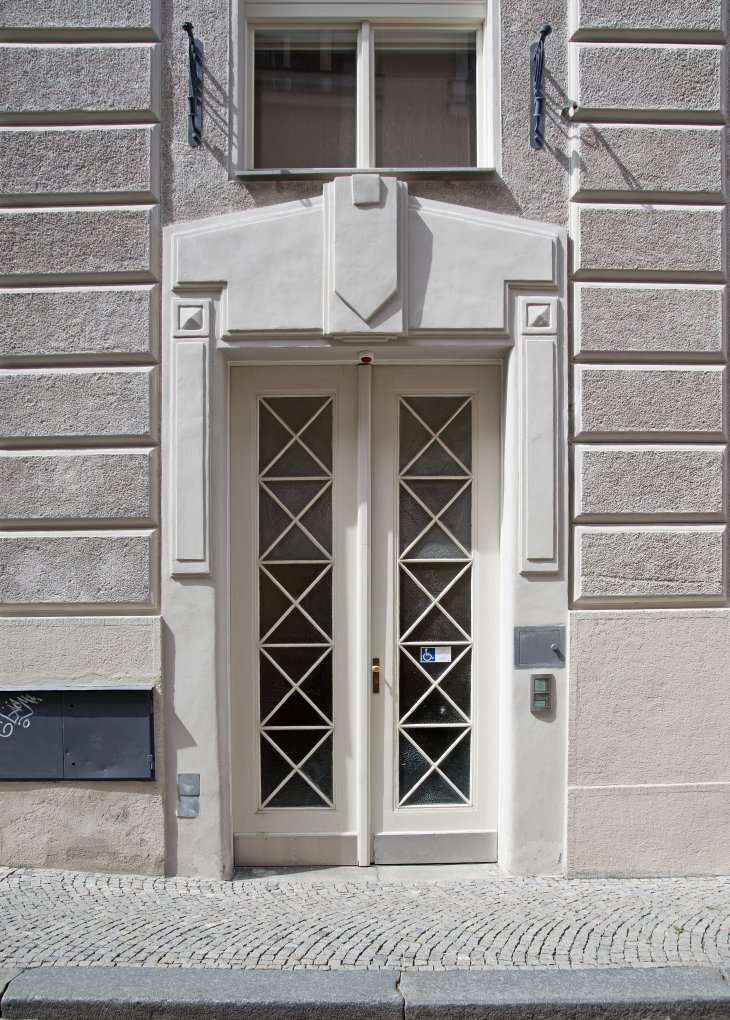 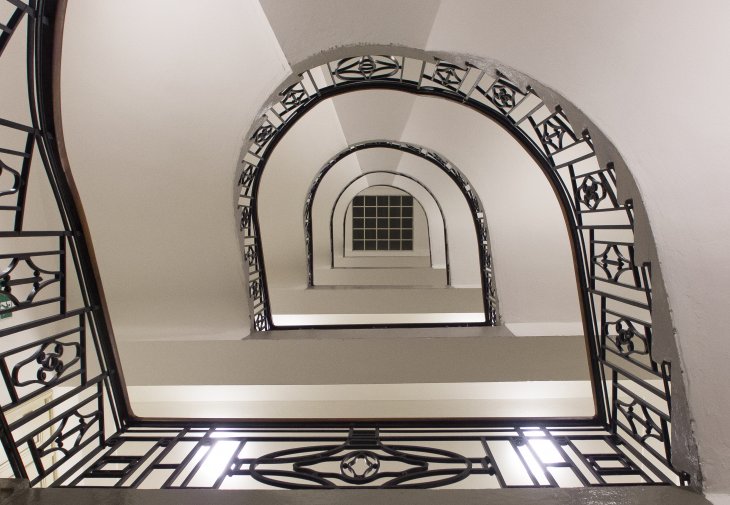 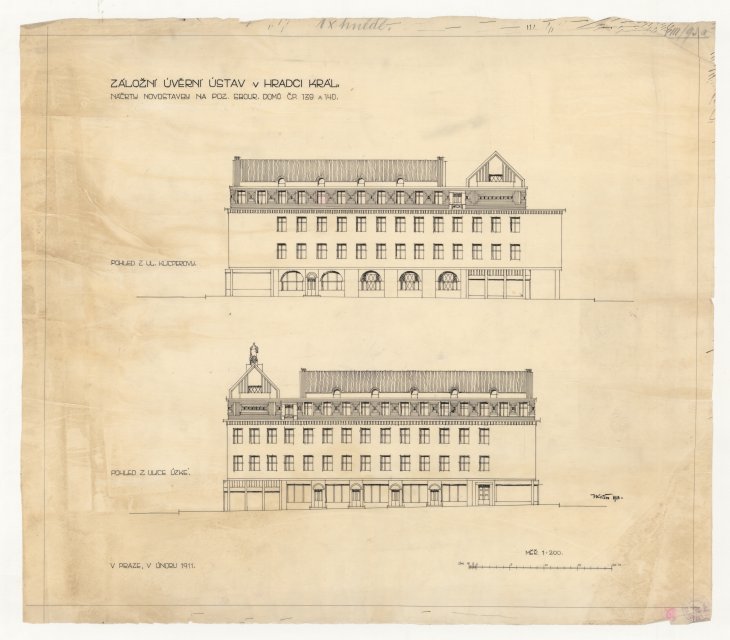 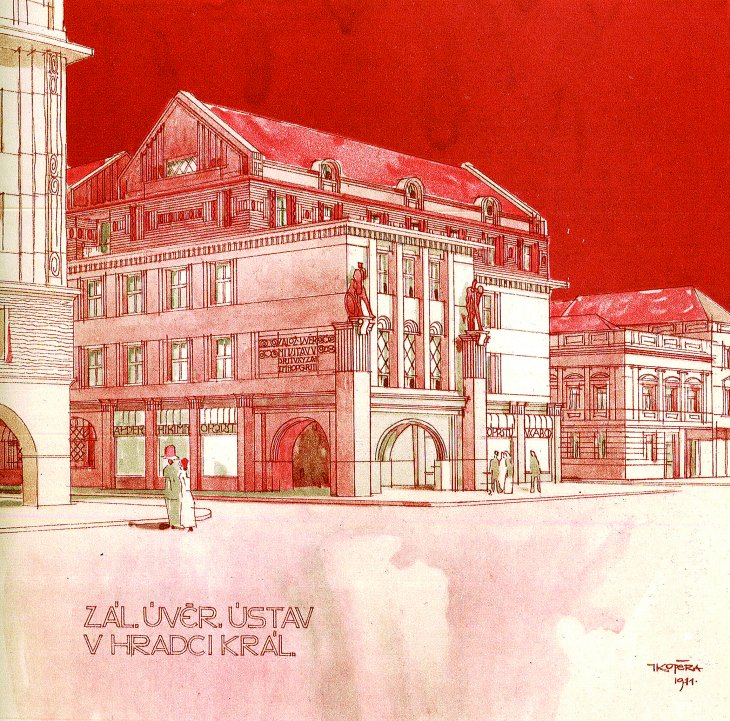 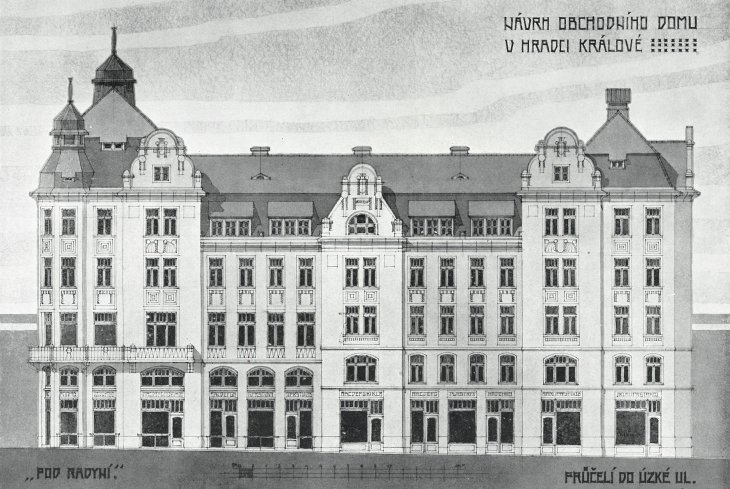 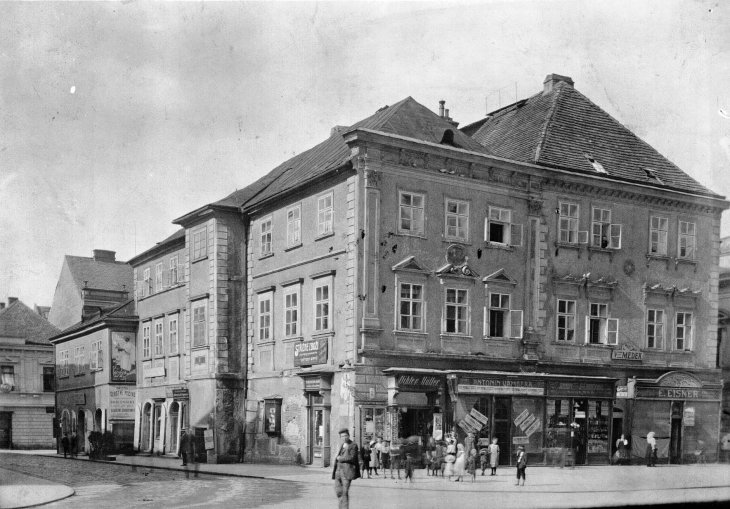 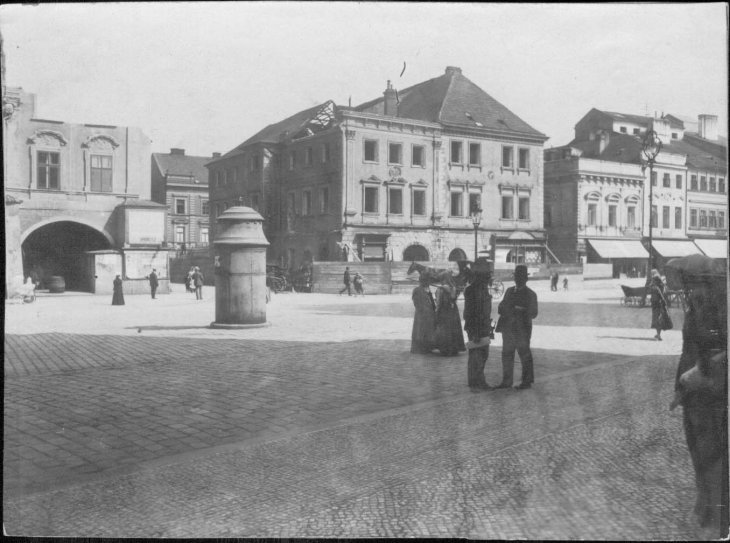 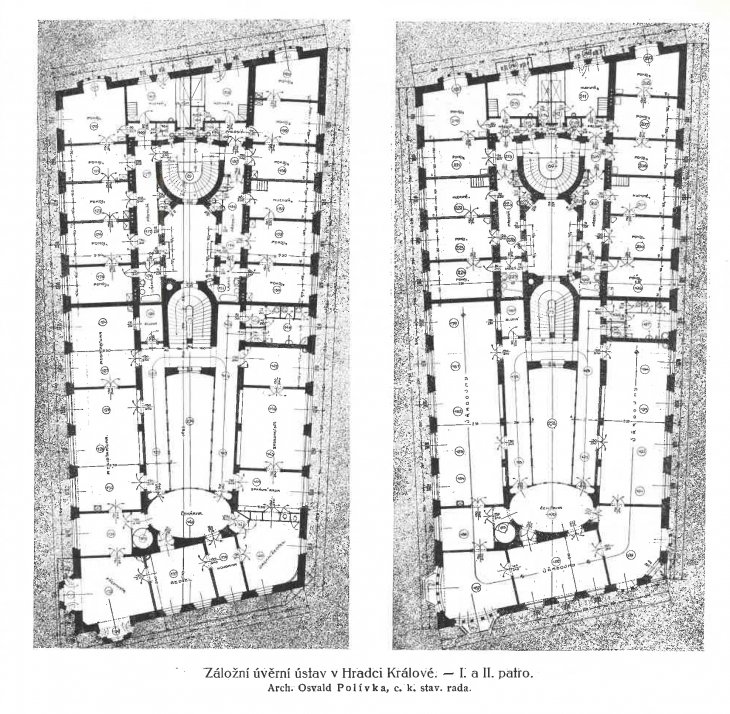 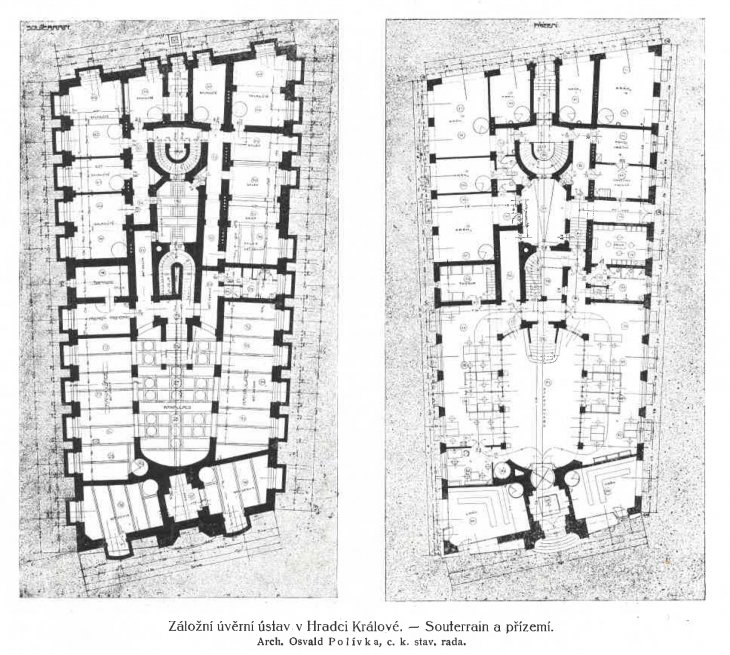 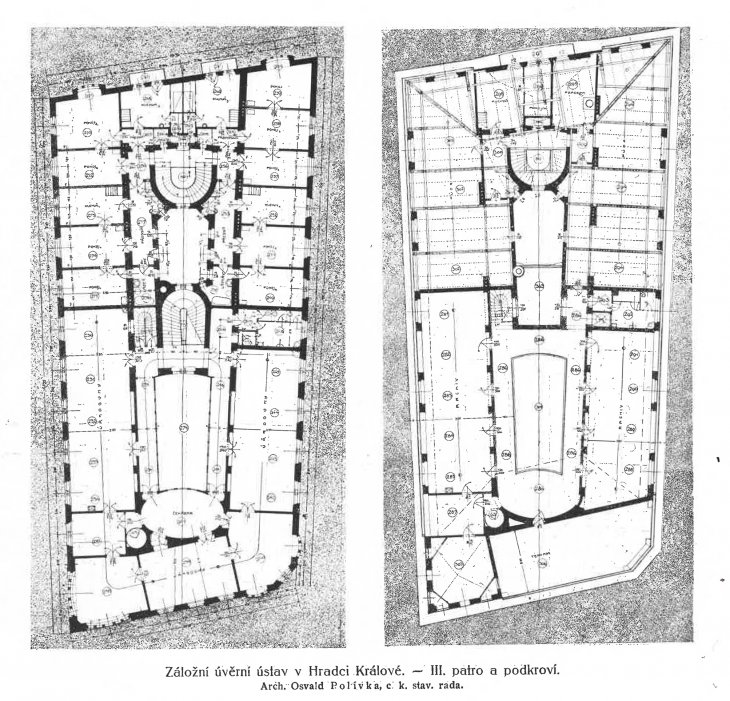 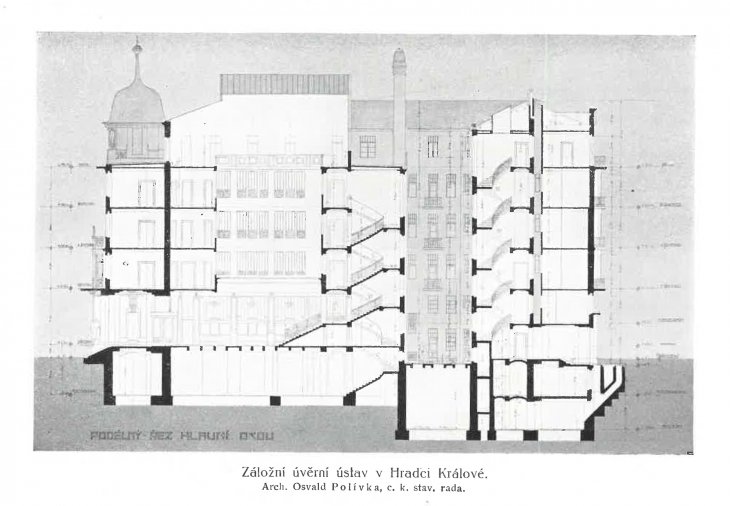 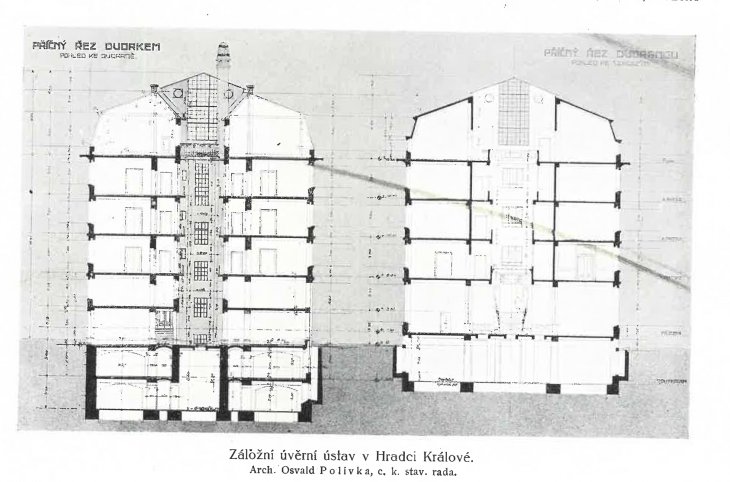 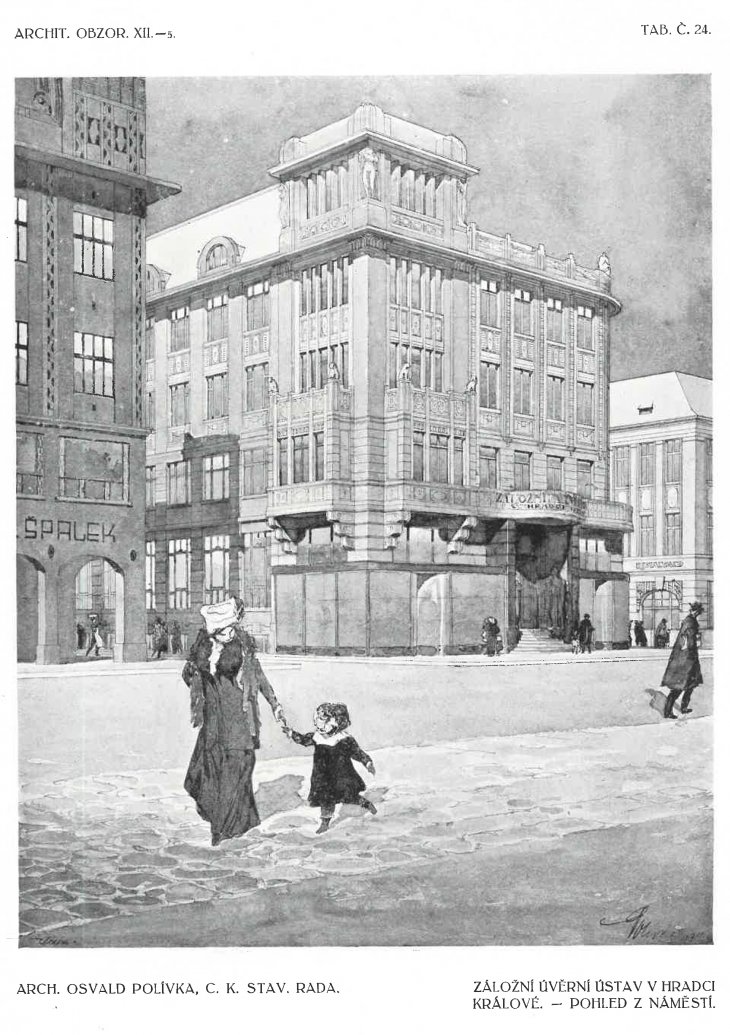 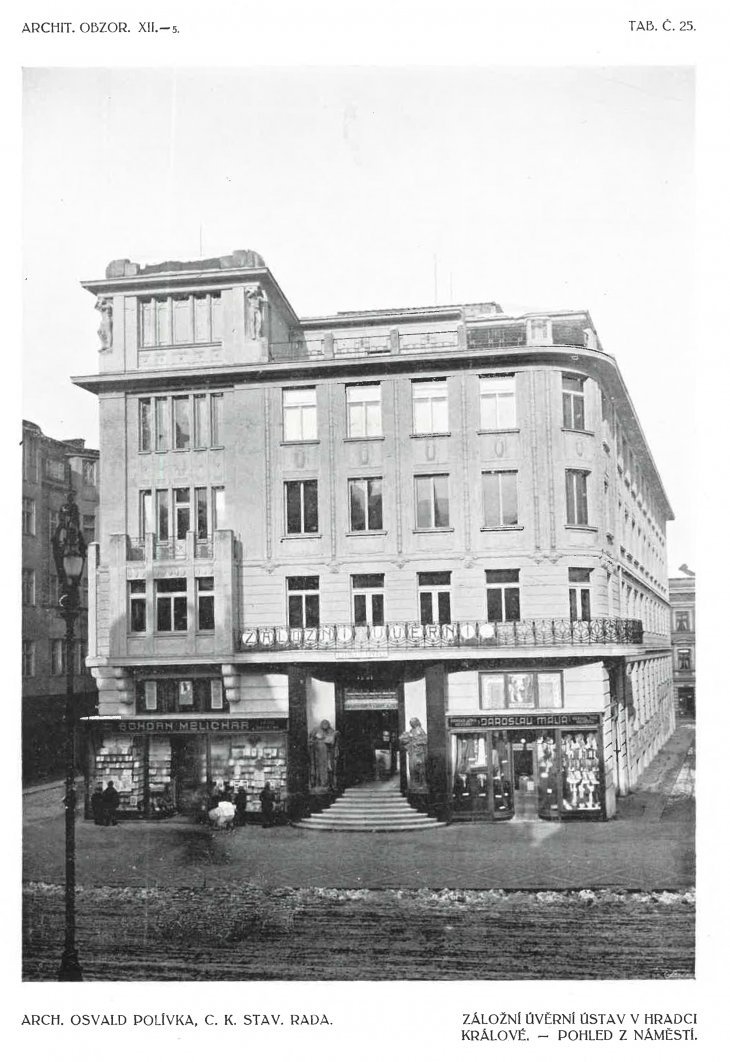 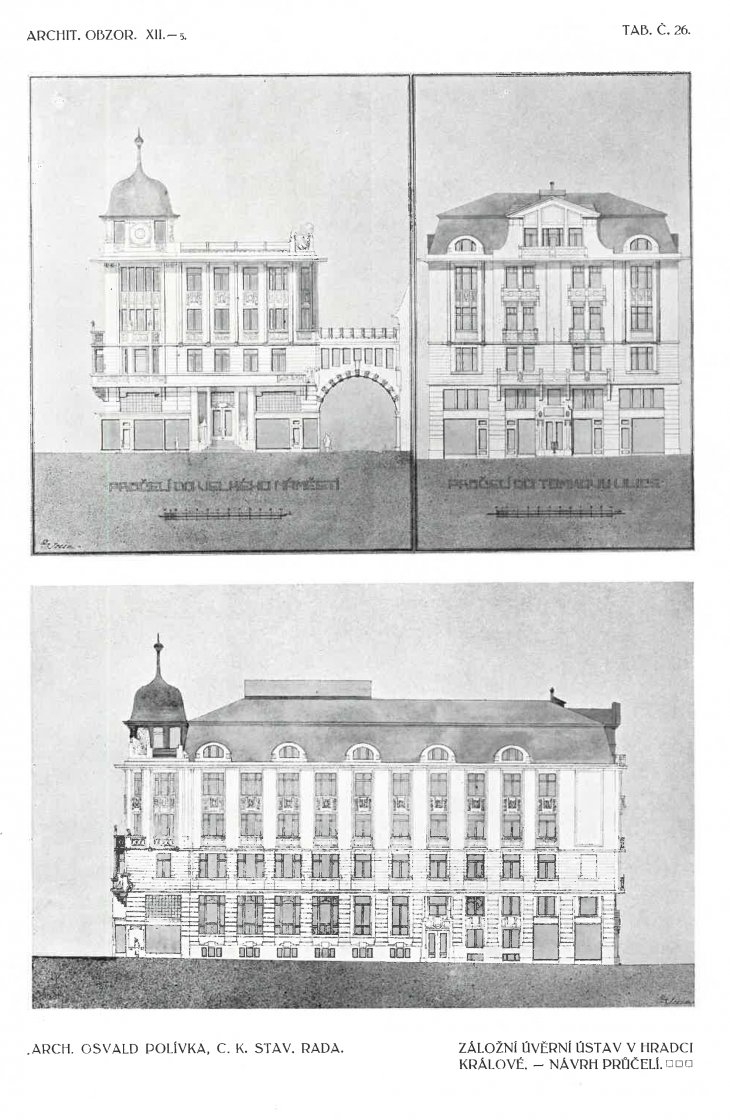 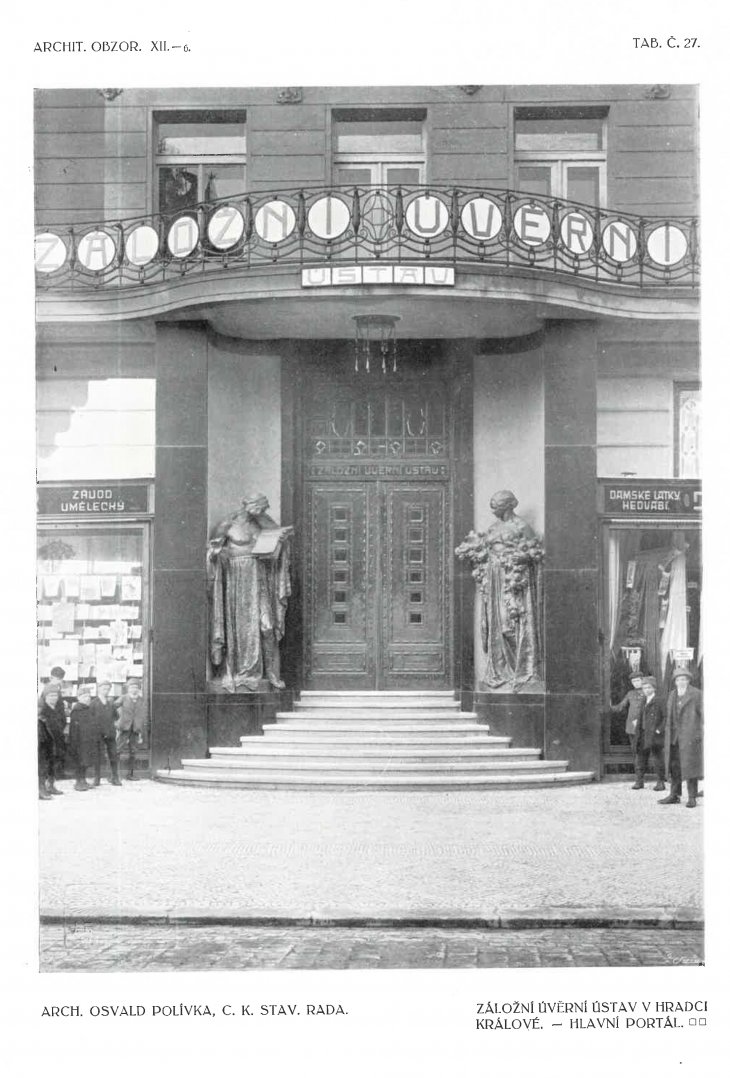