Bridge with a Lock Chamber in Předměřice 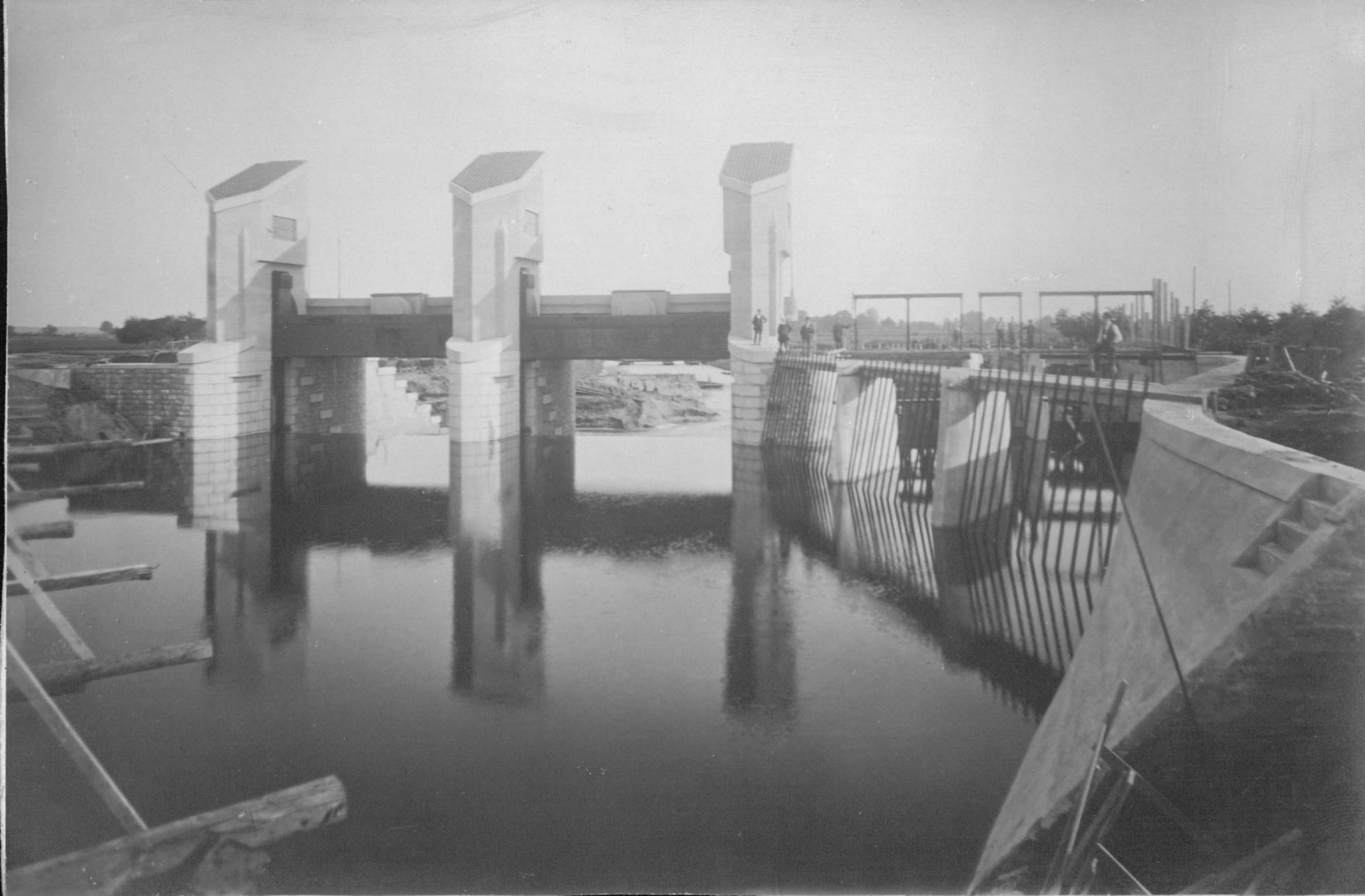 In 1911, intensive negotiations and partial work on the regulation of the Elbe River, which often poured out of its banks between Smiřice and Předměřice, started. The regulation of the river bed required adjustments of the land ownerships; some owners were bought out, others exchanged their fields for corresponding plots of land. Some of these settlements were not resolved until 1917.

About 150 meters above the Smiřice – Předměřice section, there used to be a fixed weir, which regulated the river flow. In 1917, it was torn down by ice. Until 1914, there was a wooden bridge a few meters below the new reinforced concrete bridge with a movable lock chamber. On 15 June 1914, the local council in Předměřice decided to build a reinforced concrete bridge with two movable lock chambers. The project had already been designed and it was approved by the Imperial Ministry of Commerce on 28 February 1914. It was supposed to be a “II Class bridge with regard to the load by a 180q steamroller with small (fan) pavement made of 10 x 8cm granite blocks”. The construction took place in autumn 1914 and in 1915. The large digits “1915” could be seen on the bridge front, marking the year of completion. The construction of two uplifting lock chambers with a mechanism operated from three towers was not completed until 1917.

The architectural quality of the bridge was unique. The industrial building was designed by Pavel Janák, a member of the Cubist Four, a Prague group of architects (including Josef Gočár, Josef Chochol, and Vratislav Hofman). Until then, architectural Cubism was the domain of urban buildings, mostly private villas, tenement houses, department stores, spa pavilions, etc. Pavel Janák described the programme of cubist architecture, inspired by historical architecture, especially mannerism and dynamic Baroque, in his text “Hranol a pyramida” (The Prism and the Pyramid) published in Umělecký měsíčník monthly in 1912. He wrote: “...the skewness is then a balance formed and remaining in the imbalance balanced by the breakage. Thus, if the vertical and horizontal pinacoid is a shape of calm and solitary mass balance, the obliquely formed shapes were preceded by dramatic storylines and complex unions of more powers.” In Předměřice, Janák tried to apply architectural Cubism to an industrial building. On the top of the towers, where the lifting mechanism of the Stoney floodgates was hidden, there was an inclined surface accentuated by a cornice. The tower front façades were supported by pilasters which had an inclined surface as well. This structure might have resembled the support system of Gothic church towers. As evidenced by Janák’s coloured drawing of the bridge, the design included circular windows and the façade was to be in vivid red and yellow colours. On the side, the towers had rectangular windows, and eventually, as evidenced by historical photographs, the entire building had only one colour.

The bridge with a lock chamber was damaged during the flood in 1932. Its torso was pulled down and the bridge with the power plant was replaced with a new building, located about a hundred meters below. 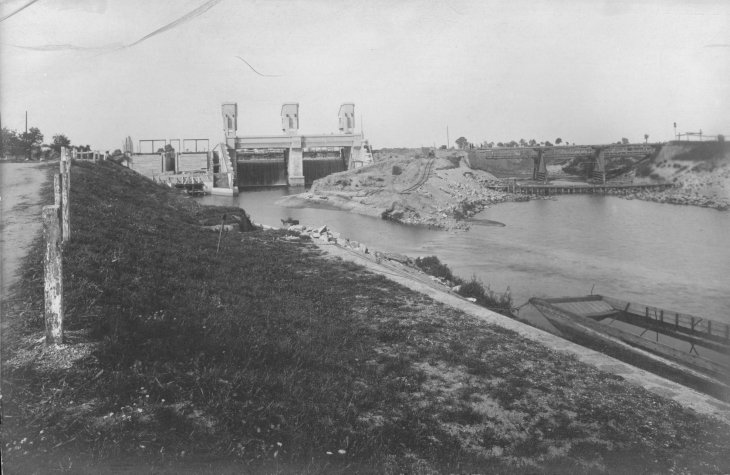 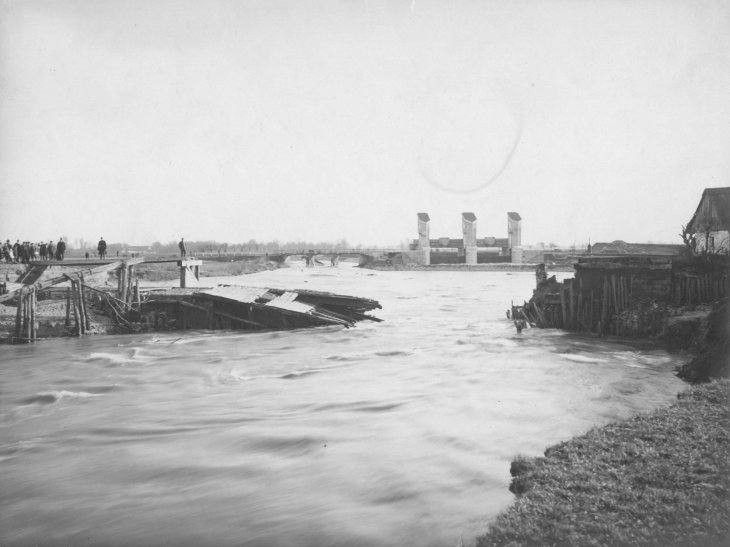 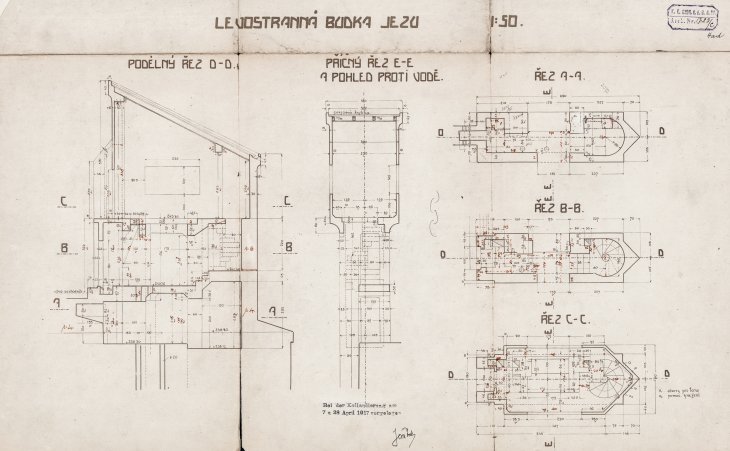 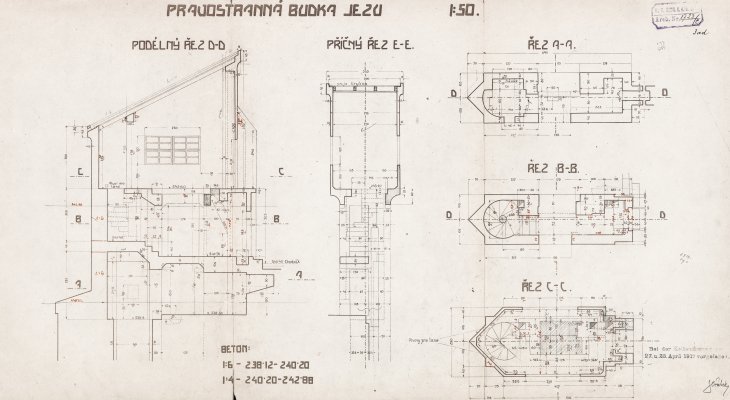