Staircase at the Church of Our Lady (Gočár’s staircases) 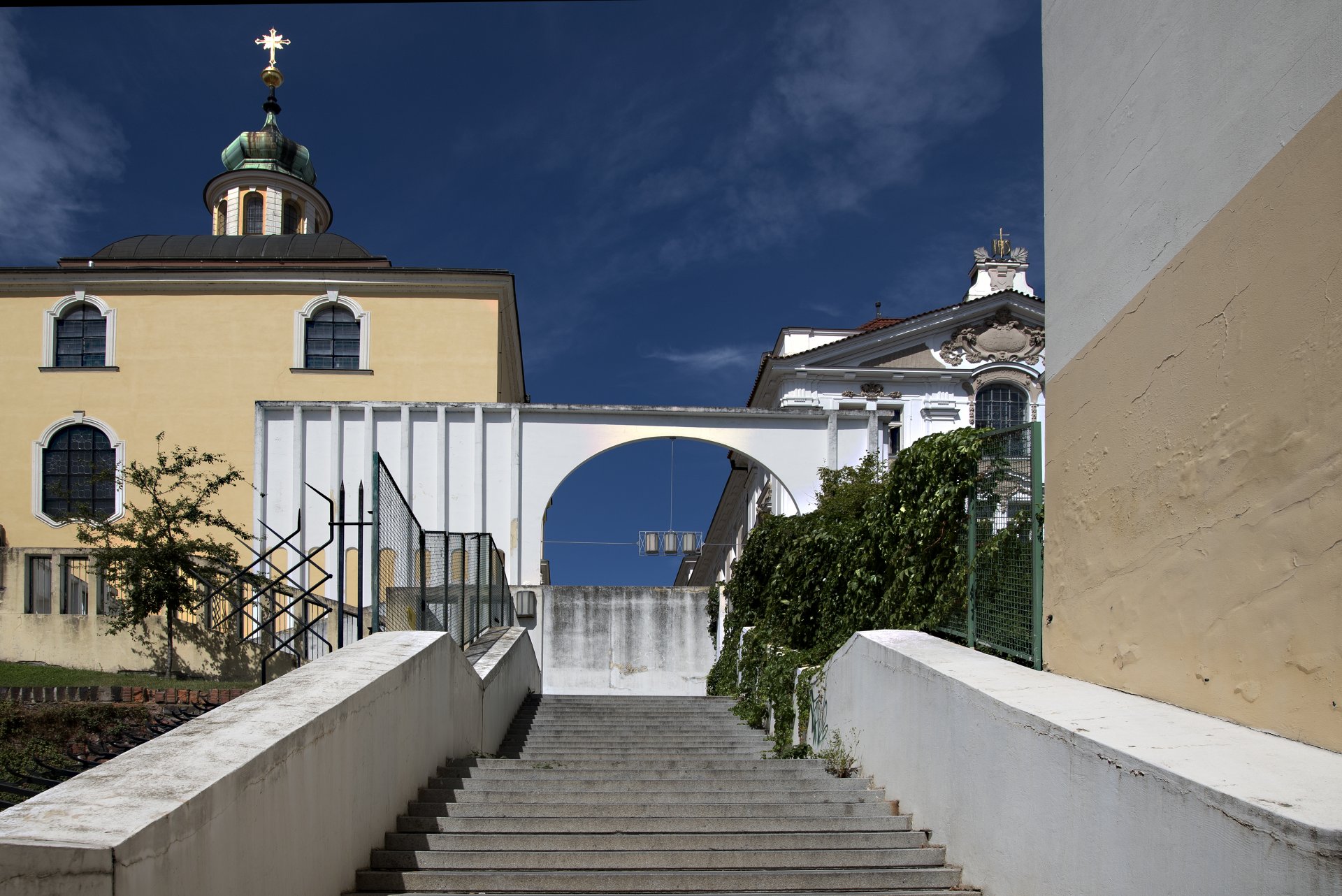 Josef Gočár was asked to design the staircase by Mayor František Ulrich at the end of 1908, shortly after Gočár left Jan Kotěra’s studio and set up on his own. Gočár designed the staircase from reinforced concrete and his second project was to be built on the site of the demolished pub U Zlatého beránka (The Golden Lamb) and the Kropáčka tower (serving as a roundhouse at that time). The demolition of the Renaissance tower ended the dragging debates about the need to build a new entry plaza to Velké náměstí Square. In the project, Gočár had to overcome a large height difference between two adjacent streets and buildings in various styles. He designed the staircase probably at the turn of 1908 and 1909 since he sent the complete documentation to the mayor already on 11 February. The city council approved Gočár’s project on 15 May 1909. The design was significantly affected by the demand to partially conceal the run-down courtyards and gardens at the terraces in the south. The architect closed the old town view of the ring road and joined different parts. The high wall with an arch facing the square closes the free space between the houses and serves as a retaining wall.

At its meeting on 20 September 1909, the city council decided to build the staircase “according to the design of architect Joža Gočár from Prague”. The staircase plaster was from artificial stone wrought with a hammer. The hammer was used to make the concrete surface look like finely texturized granite. Gočár explained the use of then quite uncommon material in a letter addressed to Mayor Ulrich: “I decided to use concrete because, for such great architectural mass, which is needed to finish the project, is more suitable and cheaper than stone, and partly due to the fact that it is perfectly weather-proof and retains its original appearance. The concrete surface shall be processed to look like finely texturized granite.” However, the final surface treatment of concrete caused a small dispute between the engineering office and Bohumír Holmann and comp. which carried out the work. Instead of cement stucco plaster, the company used artificial plaster, thus increasing the price charged. The company justified the process by saying that the artificial plaster was used to meet Gočár’s wishes. Eventually, it turned out that Josef Gočár never discussed the matter with the company, and was not even authorized to do so. Therefore, the engineering office refused to pay the required surcharge, thus ending the dispute. The staircase was opened to the public on 24 August 1910.

The staircase is about 20m long and has two landings and a square landing leading to another staircase with a landing bent at a 180-degree angle on the left. It is lined with wide smooth full railings with oblong holes around the landings. Opposite the street, there is a wall with a high arc with prismatic ribs on sides and semi-circular arches in the lower part. The original lighting fixture in the form of arc was composed of three lanterns.

In its time, it was one of the few modern projects with an original spatial solution and design. The monumental concrete building impressed the citizens of Hradec Králové with its use of bare steel concrete. Shortly after its completion, however, it was fiercely criticized. The staircase was even jokingly called “Three Mugs”, based on the unusual shape of the electric lamps. The reactions of the locals were contradictory. The local newspaper was very critical, too. “Is it beautiful? It is a modern, but not beautiful [...] The blank monotonous walls do not fit the baroque building of the Church of Our Lady and the baroque façade of The Golden Lamb. Besides, when viewed from Komenského Street, the walls cut into the beautiful façade of The Golden Lamb so hard anyone who has at least some taste looks away. Unfortunately, that the plan of the staircase surroundings was not designed... The shameful mistake cannot be undone today.” The newspapers even wrote: “The tasteless gate has already been built and cannot be demolished, so its view from Velké náměstí Square should be at least covered. The easiest way to do so would be to build a more tasteful gate between the church of Our Lady and The Golden Lamb, where once a wall used to be, and to put the transformer from Velké náměstí Square, which is not glorious either, into or behind the wall.” In the 1930s, the staircase was called an “aesthetic and hygienic failure of the first order”. The quiet corner was fouled by local regulars in the evenings and at night. The press requested to build public toilets near the staircase. The following epigram illustrates the context:

“The Salon of the Republic, the city of slaves / the most modern things truly must have, / including the new type of public toilets: / just take a look at Gočár’s staircase.”

The project was defended by František Tichý, a local propagator of modern architecture: “If we want to have a beautiful city, we have to cooperate with excellent architects... We should be glad that the sense of beauty is developing in Hradec (Králové) and keep away from those who do not have this sense by nature nor nurture because they do not have the necessary education.” In 1930, art historian Karel Herain said that the staircase “fits into the environment as an important matter of course” and it is “the first example of uncompromising purist architecture” in Hradec Králové.

Gočár was inspired by the essay “Co je monumentální umění” (What Is Monumental Art?) by Peter Berens, published in Style in 1908. Based on the essay, we can see the staircase as a “monumental architectural achievement” the importance of which does not lie in “its size but in timelessness”.

In 1995–1997, the staircase was completely reconstructed and decorated with inappropriate yellow plaster. During the reconstruction in 2009, white plaster was used.

Under a preservation order since 1964; registered on the Central List of Cultural Monuments of the Czech Republic as 39702/6-553; part of the city conservation area. 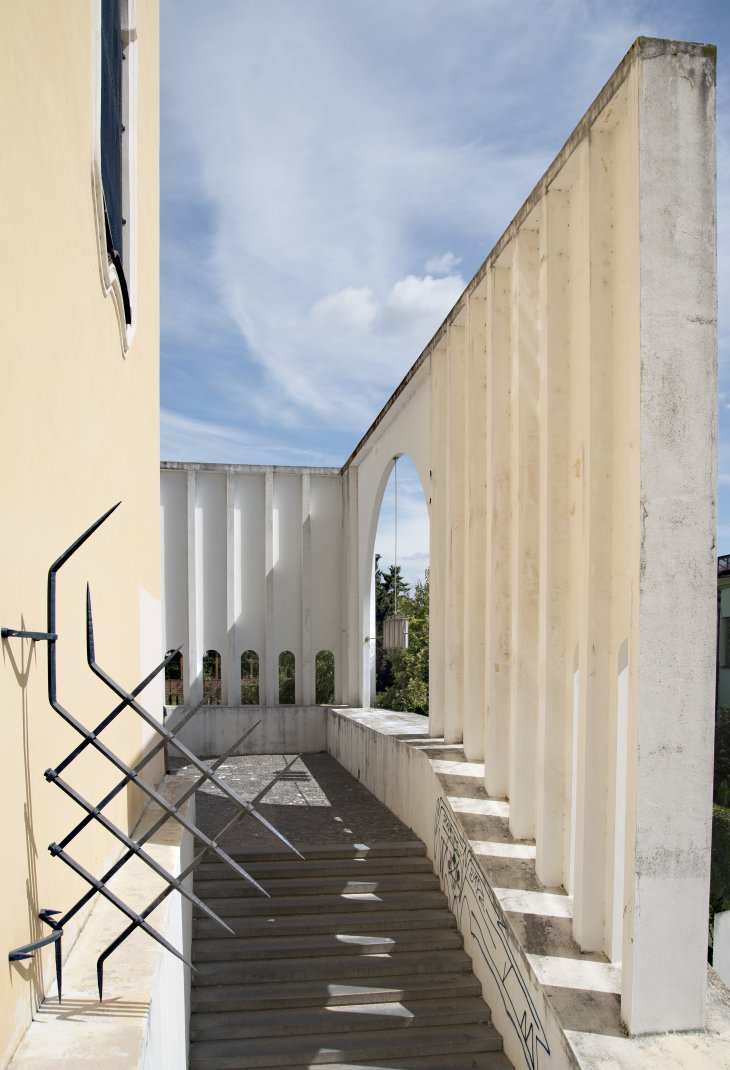 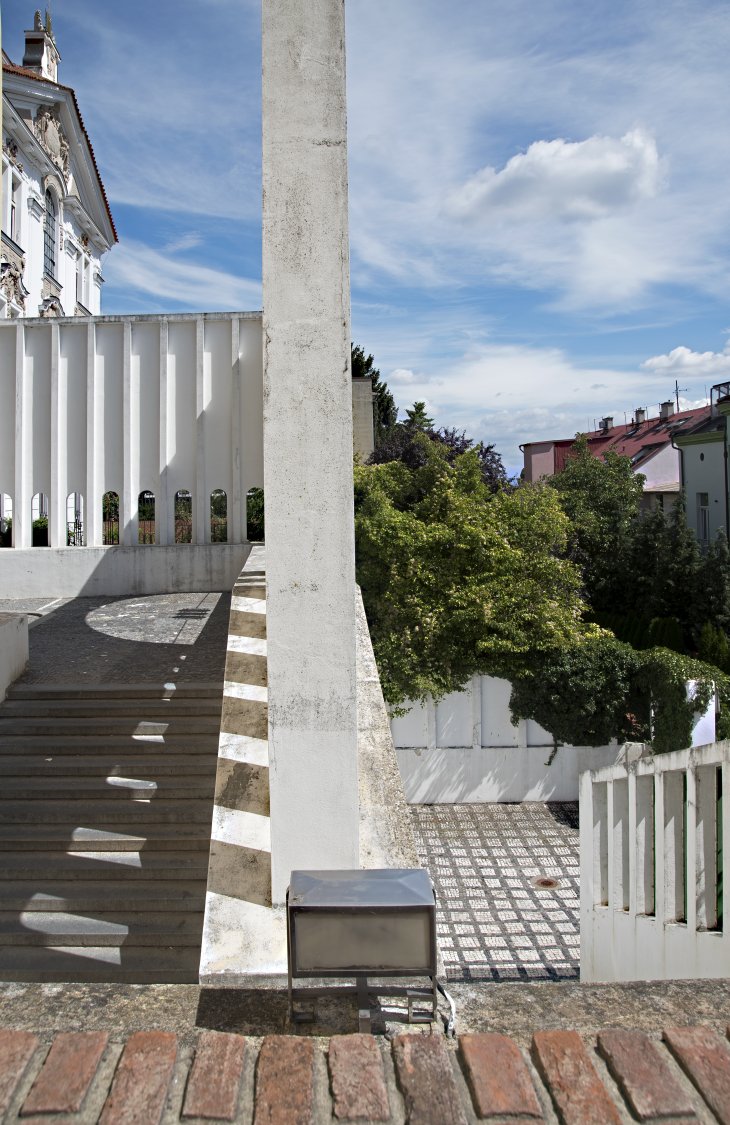 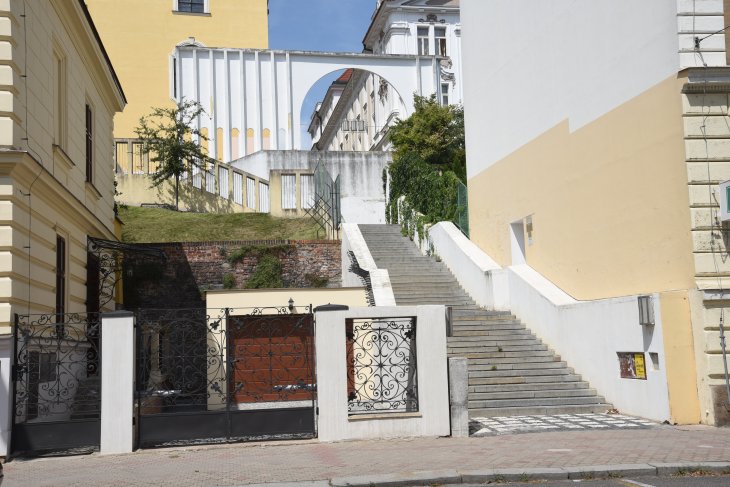 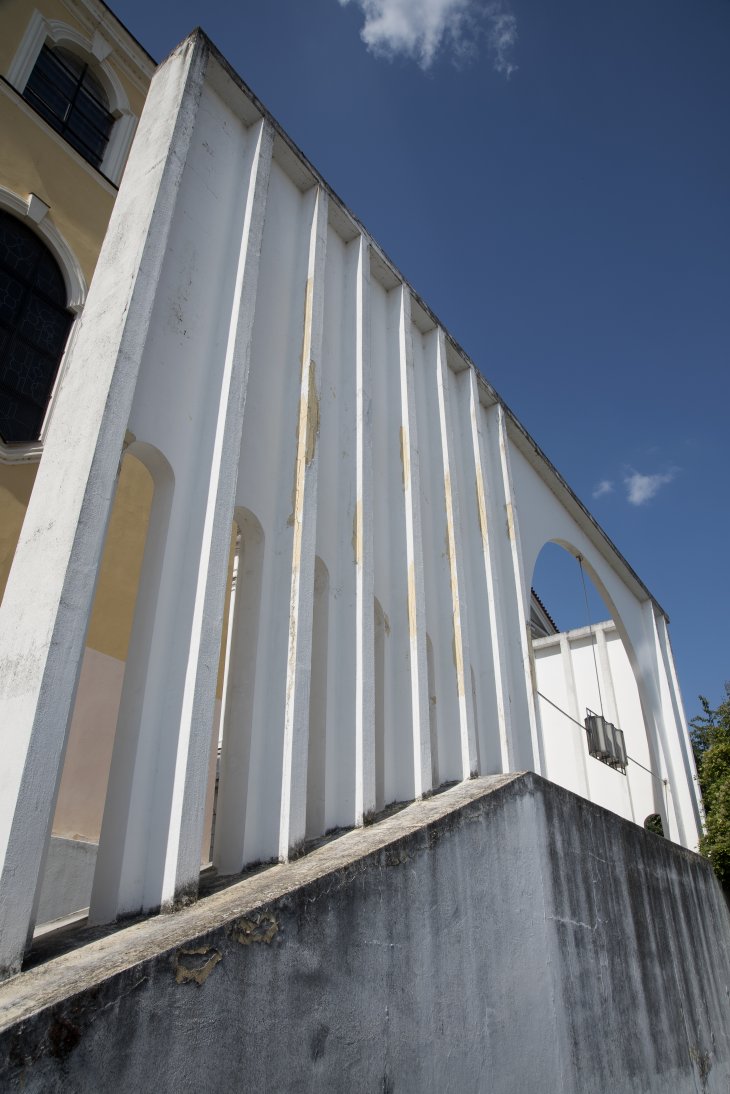 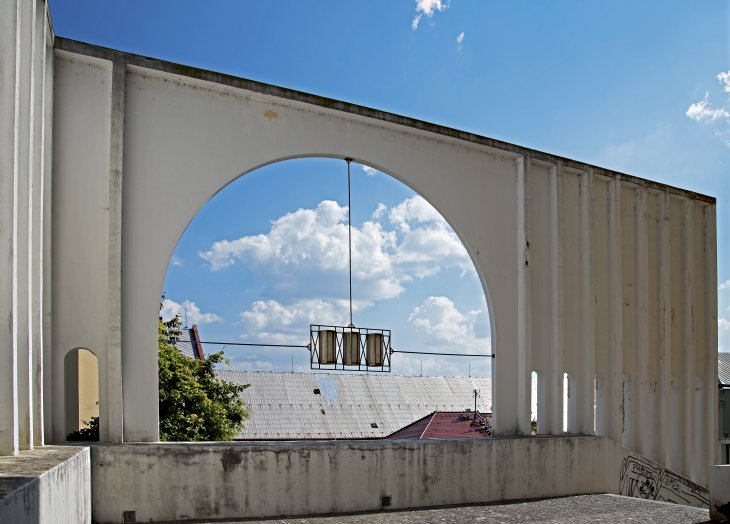 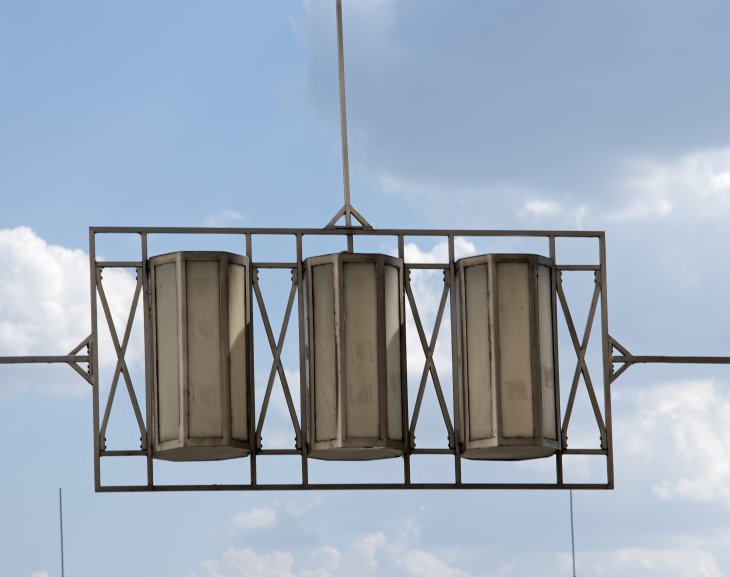 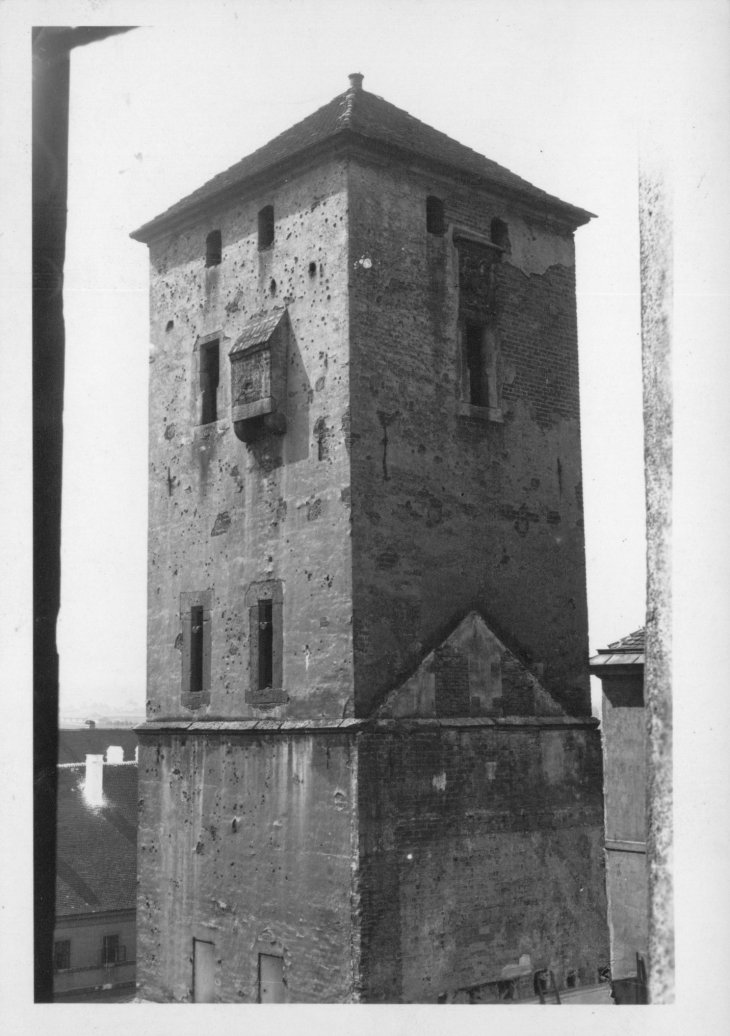 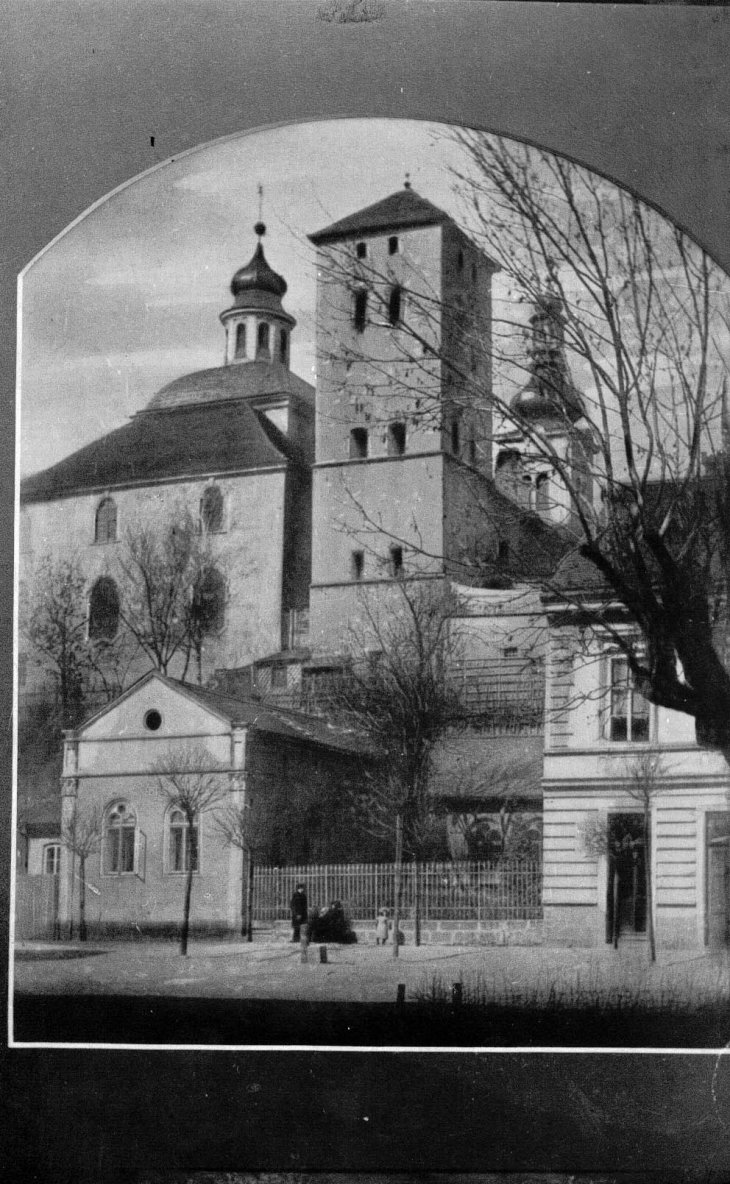 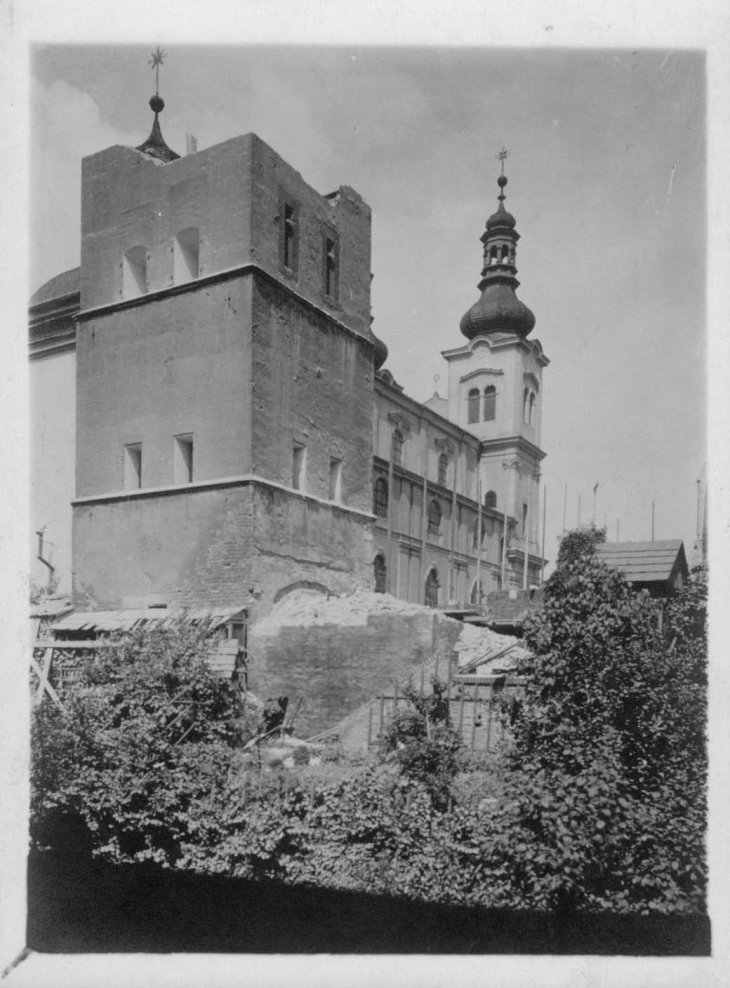