The second floor of the existing house and the new warehouse, including an administrative section, were designed by Oldřich Liska. The project owner was the Central Co-op, registered association with limited liability, in Hradec Králové.  The cooperative had several (at least 12) shops in the city. The new building was to be the headquarters of the investor. The representative building included offices, a lecture hall, flats, and technical and storage facilities. It was built by Jan Mádlík and Jan Včelák from Hradec Králové between 11 June 1937 and 12 February 1938.

The architect connected the original house with a new corner elongated building. The three-storey building (one part of which had two floors) was divided by the façade into three parts. On the ground floor, from the corner to the passage, there was a glass parterre with shop fronts, where the main business of the Central Co-op was supposed to be. The corner of the house had a simple purist façade with balconies on the first and second floors attached to the extended main façade. The middle part has a box shape like some of the other projects by Oldřich Liska, designed in the functionalist style.

On the ground floor of the main façade, the architect designed the passage to the complex with other objects such as the above-mentioned bakery. The third part of the house was built in a more conservative style and does not match the functionalist purist design. It is therefore possible to assume that this is where only the second floor was added because its simplicity closely resembles the rest of the house. Judging by the window frames, the window fillings and the entrance with a balcony on the first floor, it can be argued that the house was built as early as in the 1920s.

In the basement, there were technical facilities such as the boiler room. Since the house was designed as a multi-purpose building, there was also a textile warehouse, a register, and the store and flat cellars.  On the ground floor and in the corner of the building, there was to be a large shop with toilets and facilities. In the preserved part of the original house, the architect designed a flat and a packing room with a warehouse for spices. The first floor then connected the original house and the new building designed by Oldřich Liska and served as an administrative base of the Central Co-op. The classic corridor enabled access to the rooms. In the corner of the building, there were mainly offices (e.g. the bakery office, the director’s office, etc.). The house had several terraces facing the courtyard. In the rest of the rooms facing the street, there was a cash office and three account departments. On the second floor, there were two fully equipped flats with terraces and a balcony. Three rooms of the inspection department were designed between the residential units. The third floor was primarily designed for lectures. The large hall had a long row of windows, which illuminated the whole area and faced the surroundings. The floor also included a meeting room and a lecture room. There were also bathrooms and a terrace with a view of the courtyard.

The building is part of a large industrial complex consisting of a dozen buildings. Partial modifications and extensions in the rest of the complex were carried out in the 1940s.  The building is valuable also because it was the last functionalist project designed by this architect in Hradec Králové. At present, the house is used as an office and business building. Between 2015 and 2016, a reconstruction was carried out: the building was insulated but the original combination of colours, white with blue and grey tones, was not restored on the façades. 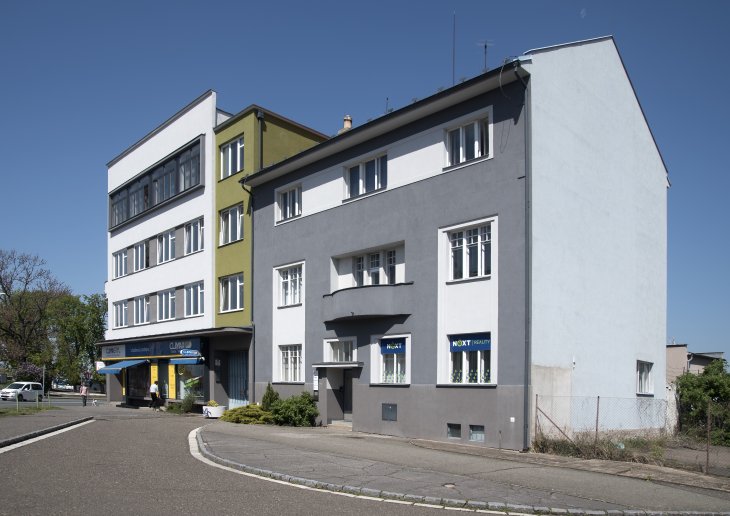