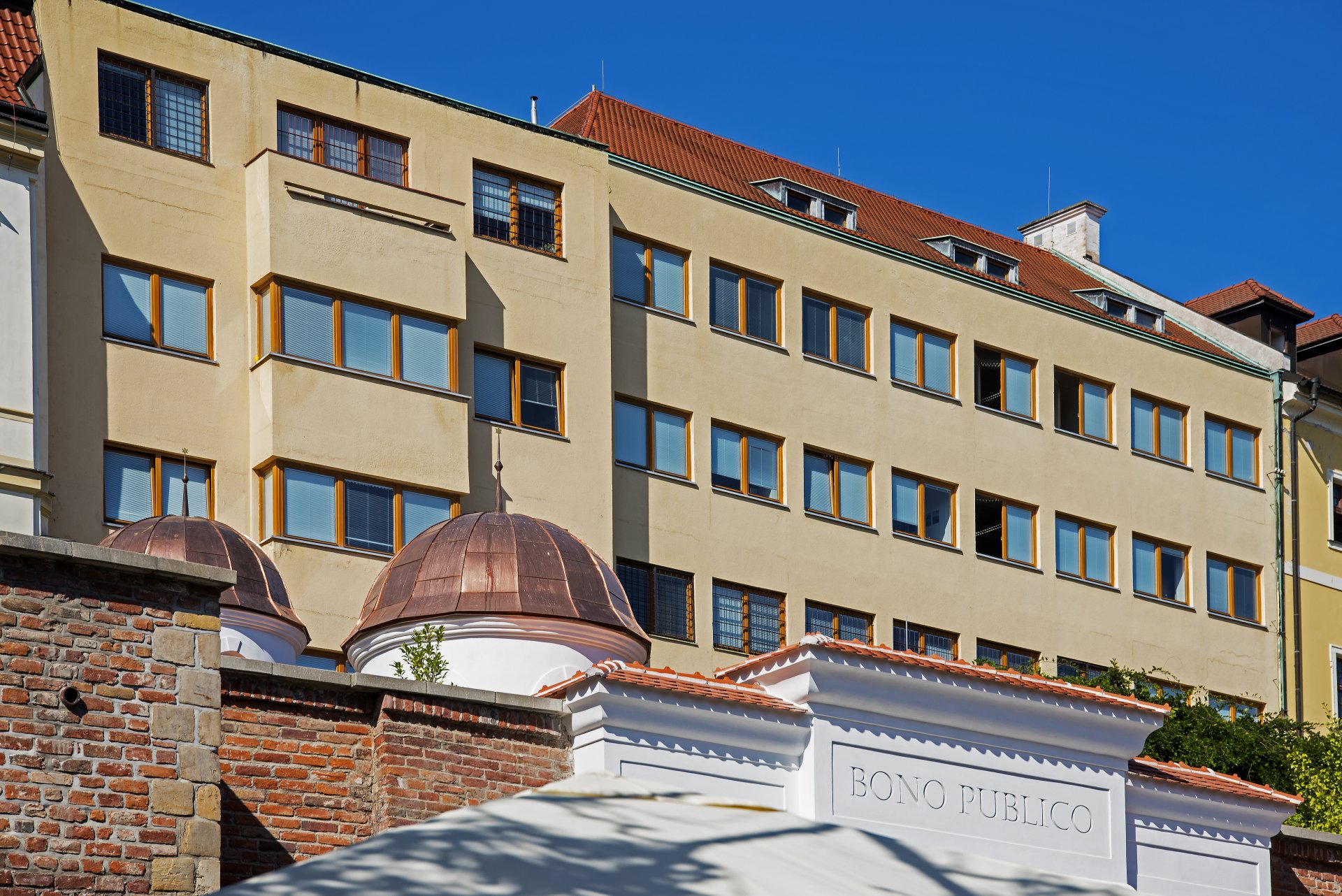 For the city, the Královéhradecká Bank became a unique tool for the construction and urban development. The profit of the city-owned bank covered the development projects, construction projects, housing construction and civil construction (the city spa) and it was also a savings bank that offered favourable loans for the construction of major public buildings (e.g. the Sokol gym). Since the early 1920s, the bank planned to extend its building no. 33 in Velké náměstí Square. In 1922, Oldřich Liska designed its renovation and neo-baroque façade. In 1927, the bank announced an architectural competition for the renovation and completion of the building. The first prize was not awarded, while the second prize was awarded to the design by architect František A. Libra and the third place occupied by two projects by Oldřich Liska and the Rejchl brothers. The awarded designs, however, were never built.

In 1931, the bank decided to complete the court atrium (the middle tract between the historical building facing the square and the rear wing facing the ring road) and a new residential building in the courtyard of the neighbouring house no. 34 (U Špuláků House), which got a new no. 800. The project was designed by architect Jan Rejchl who had already designed the Věkoš regulation project for the bank, which was part of the annexation of the neighbouring towns and villages to Hradec Králové. Rejchl’s project also included the unification of the southern façade, facing the first ring road and towering above the Bono Publico classicist staircase, and the renovation of the relaxation garden adjacent to the rear tract of the bank.

Although it was one construction project, it had two contractors. The official contractor of the residential building was the city, but the funds were provided by the bank. In the basement of the building, there were five cellars, a shared bathroom for two flats on the ground floor, and generous and modern facilities for washing – including washing tubs and space for a washing machine, an ironing room, and a drying chamber. The boiler room was accessible separately. The lowered space contained two boilers, and there was also coal storage and a yard. On the ground floor, there were two equally large flats – with a tiled hall, a toilet and a pantry, the kitchen with floorboards and a tiled area with a stove, and a bedroom with beech parquet floor. The original layout of the first floor was the same – two flats without bathrooms – but the architect changed it, joined the two housing units into one and designed a bathroom in the west. The second and third floors included a large flat, a kind of villa in a tenement house. On the second floor, there was a hall, a toilet, the maid’s room, the kitchen and a large dining room with a living room, connected by a sliding wall. The area of the dining room was the same as the ground floor flat. It also had different floors: while the ground floor flat had beech floors; in the large upper flat, there were luxurious oak parquet floors. The third floor contained a bedroom, a children’s room, a bathroom, and a large roof terrace extending over the entire width of the building. The residents of the house were chosen by the city engineering office as the owner. The two smaller ground floor flats were not rented; the large apartment on the first floor was rented to director Karel Kašpar and the largest flat on the second and third floors to lawyer Josef Kaňka.

The layout of the bank atrium can be seen in old photographs. Jan Rejchl, who used his experience of designing savings banks in his doctoral thesis, entitled “The Savings Bank Defended at the Prague Technical University”, in 1934, designed an atrium building with a raised ceiling in the centre, lit by daylight through skylight windows. The rectangular atrium hall was lined with counters. The room was dominated by a square clock. The interior featured dark oak furniture, brass and chrome; above the cash desks, there were illuminated inscription panels made of frosted glass. The two objects – both the bank atrium hall in the yard of the house no. 33 and the residential building no. 800 – are probably the most advanced designs by Jan Rejchl inspired by architectural avant-garde. It is most obvious on the second and third floors featuring all the attributes of modern residential architecture for the richest clients.

After the completion of the original building in Velké náměstí Square in 1932, however, the bank still planned to build a new building. The bank tried to realize this plan until 1940 and involved a large number of local and other architects: including Jan Rejchl and Oldřich Liska, Josef Gočár and his pupil Karl Mahrla, Josef Fňouk, Jindřich Freiwald and Jaroslav Böhm’s office, Evžen Linhart, Václav F. Hofman, Josef Havlíček, Vladimír Krch, and Vladimír Zákrejs. Due to the lack of political will, funds and consensus among the preservationists and protests organized also by the Club for Old Prague, none of the many designs of the new building of the savings bank was built, so Jan Rejchl’s completion, built in 1931–1932, has remained the only realized project.

The Savings Bank extension is part of the listed the urban conservation area in Hradec Králové.