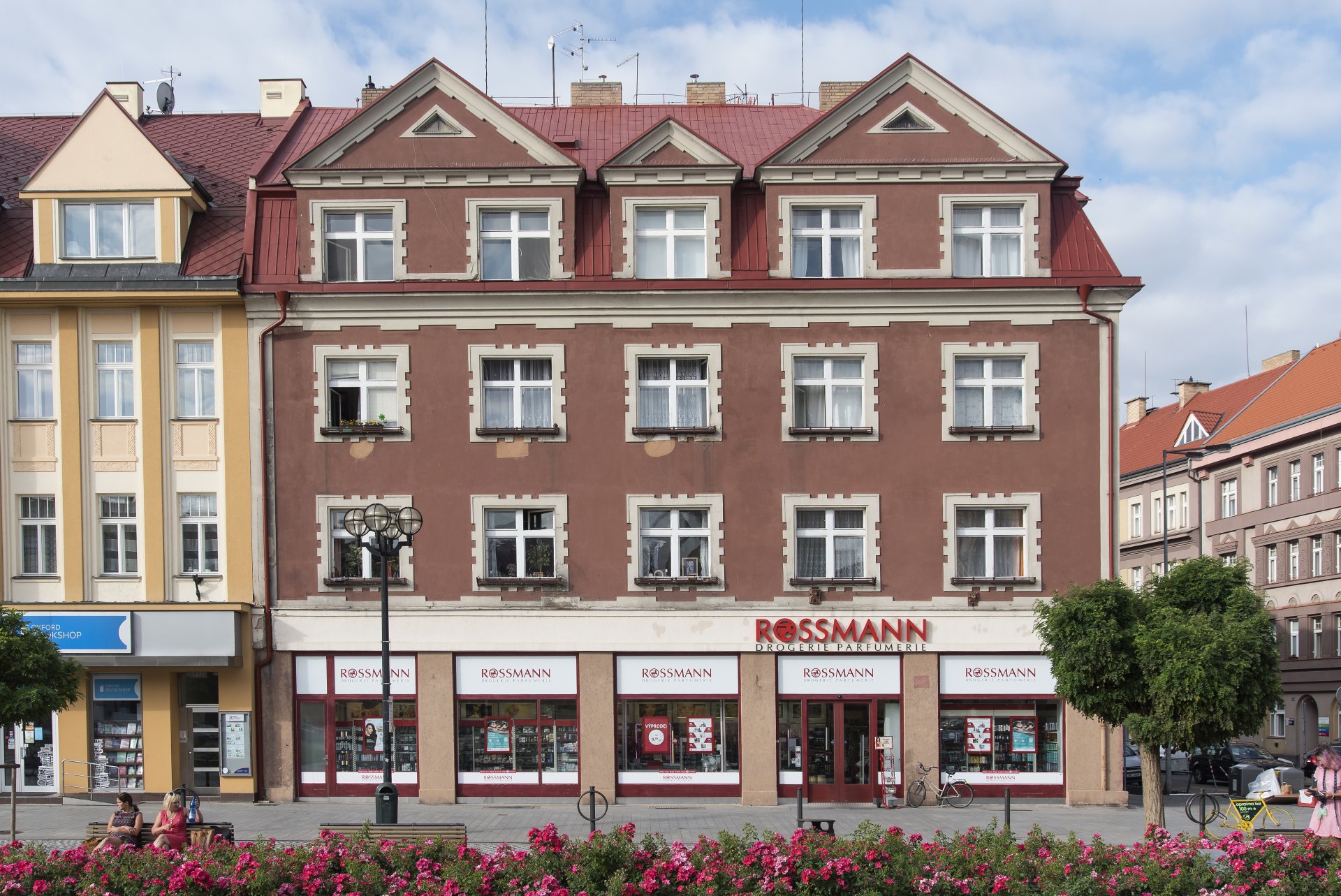 The construction of the tenement house on the corner of today’s K. H. Máchy Street and Masarykovo náměstí Square began in December 1922 and according to the project dated September 1922, it was completed on 31 December 1922. In 1922. The list of the rooms is dated 15 January 1924.

The building has two entrances, so it has two numbers. It is divided into a larger corner part and a smaller part situated in K. H. Máchy Street. On the ground floor of the smaller building, there was a two-room flat and a one-room flat, each with a kitchen facing the courtyard, an anteroom, a toilet, and a bathroom with a bathtub. In the basement, there were eight cellars in three separate rooms and a laundry room. The floor plans of the flats on the first to the third floors were the same: a two-room flat (compared to the flat on the ground floor, its rooms were wider because of the entrance corridor) and a one-room flat with a kitchen facing the courtyard. Each apartment had a bathroom with a bathtub, a toilet, and a pantry facing the skylight in the centre of the house. In the house no. 617, there were eight housing units.

The corner building is bigger. There were nine cellars and a laundry room in the basement. On the side facing Masarykovo náměstí Square, there were three warehouses of the shops in the parterre. On the ground floor facing the square, there were two smaller shops with a warehouse in the courtyard part and a large shop with another warehouse. In the part facing K. H. Máchy Street, there was a shop without a warehouse and a two-room flat with a kitchen facing the courtyard, a bathroom, a toilet, and a pantry. The layout of the first to third floors was the same. Three-room flats of an irregular layout faced Masarykovo náměstí Square, each accessible from its own staircase. The flats included three walk-through rooms, an anteroom, a bathroom, a toilet, a kitchen, and a maid’s room. A small two-room flat without a maid’s room was situated in K. H. Máchy Street. There were ten flats in the house. The ground floor flat was probably the caretaker’s flat because there were cellars and yard sheds only for nine flats.

The author of the architectural design is not known. The house has a façade with shallow decorative chambranles around the windows and lesenes with square friezes and a profiled crown cornice. In the roof with a sharp pitch, there are windows with triangular gables decorated with repetitive lesenes with square friezes. The architectural design was loosely inspired by the national style, i.e. the residential, administrative and representative architecture designed by Pavel Janák at that time. Marie Benešová even attributed the façade design to Janák, although there is no evidence of his authorship. The only contemporary mention supporting this fact can be found in the representative publication Hradec Králové published in 1925, p. 36, where the new tenement house is mentioned: “Designed by: Architect Pavel Janák, Professor of Architecture at the Academy of Arts, Architecture and Design in Prague. In addition to the shops, 18 apartments were located in the building. [The house] was built by Hypius and Sedlák, an architect and a builder in Hradec Králové, in 1923 at the expense of the city of Hradec Králové with the state subsidy. The total cost of the construction was CZK 1,400,000,-.”

Immediately after the final approval, the business parterre was occupied only by one tenant: Karel R. Müller and Comp. After 1948, the roofing materials were replaced with sheet metal. From the beginning, the house has had a contrasting façade – a dark area and bright decorative lesenes and chambranles.

Tenement house no. 617 and 618 part of the protected urban conservation area in Hradec Králové. 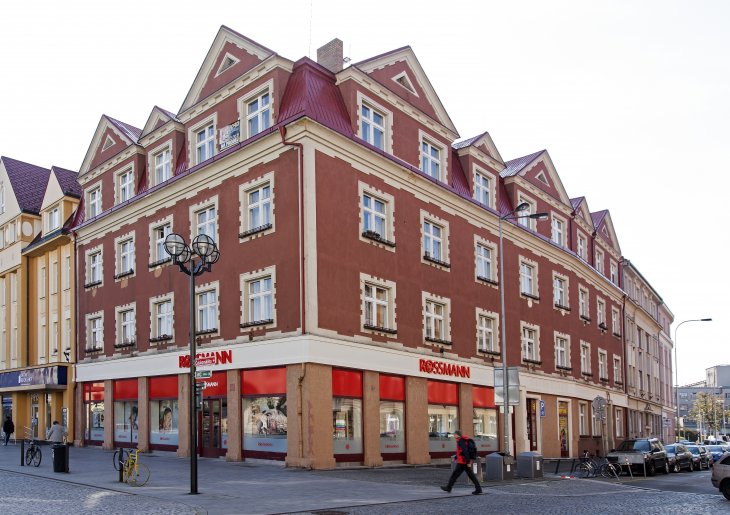 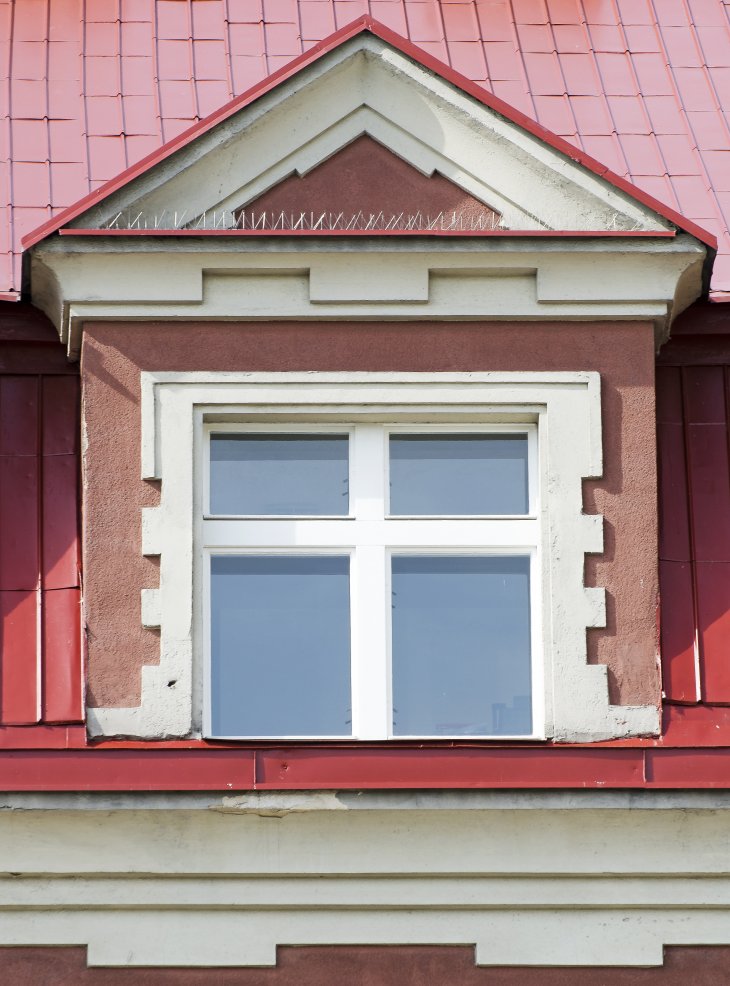 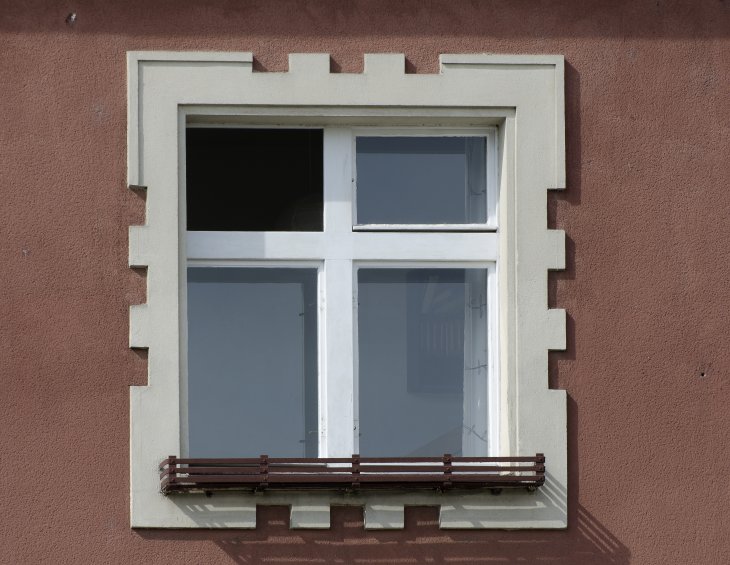 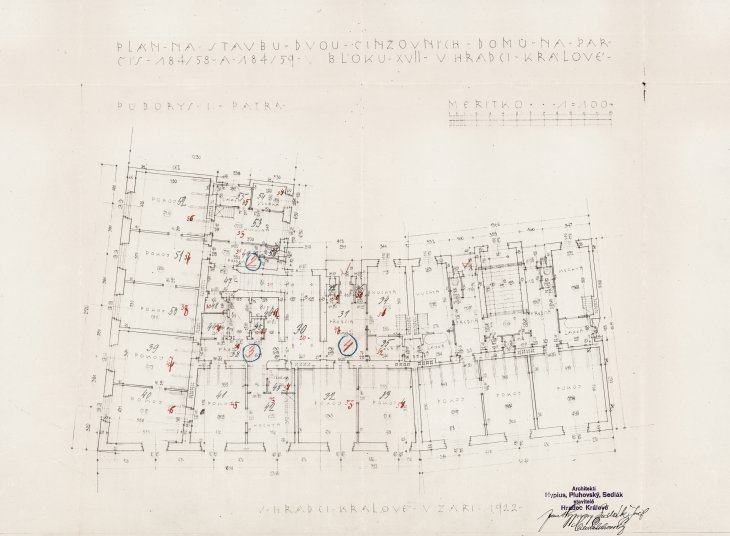 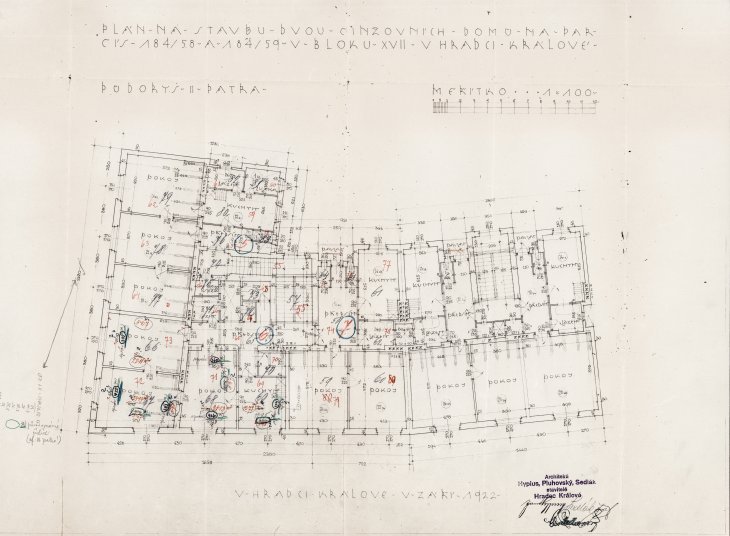