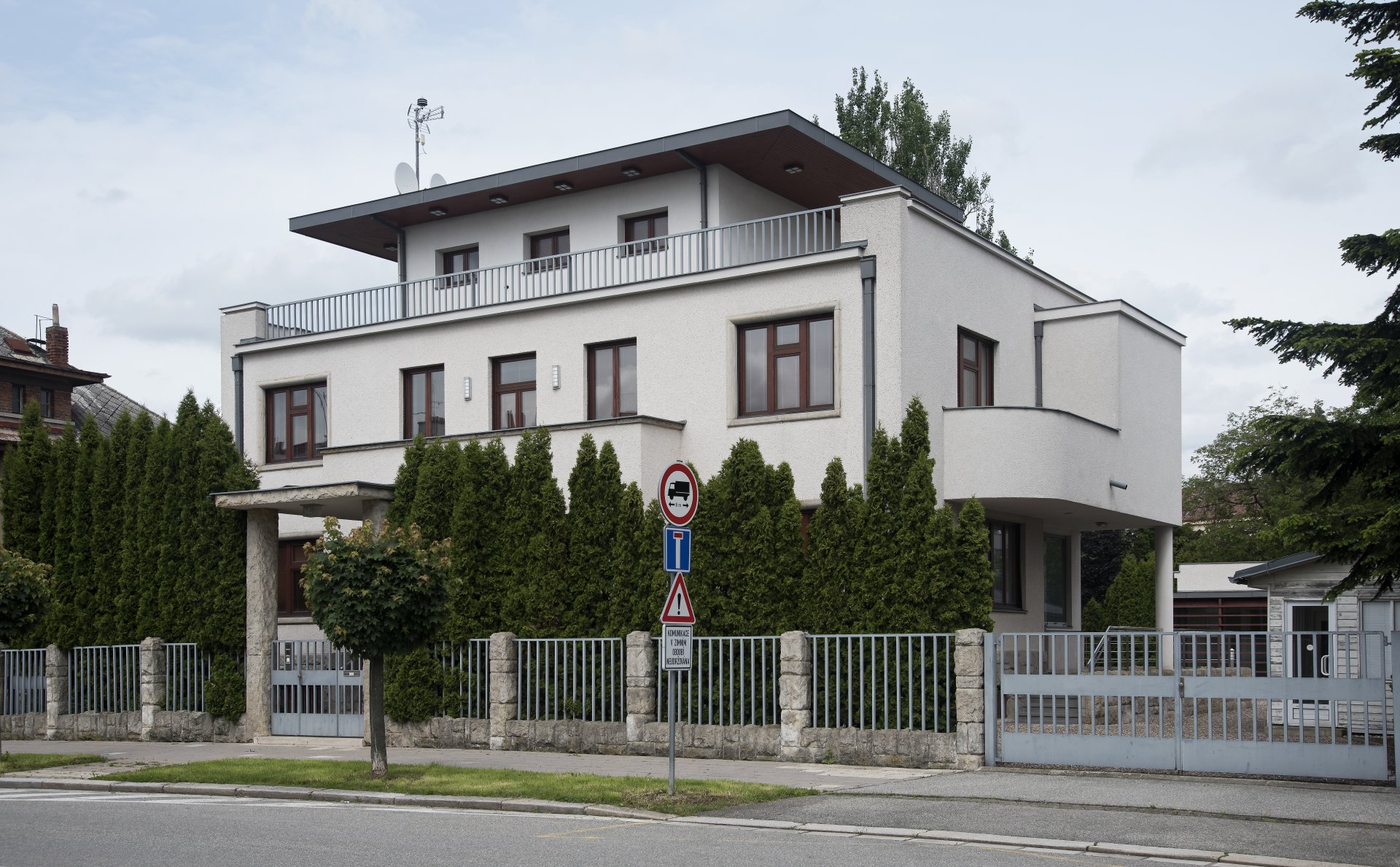 The project of a two-storey house with a cellar is dated 11 February 1935; the permission to build the villa was released on 25 February in the same year; the plans were approved on 6 March. On 31 December 1935, the basement layout, newly designed by František Komárek, was approved; it included one room, a kitchen, a toilet, a pantry, a boiler room with a coal cellar, a laundry and drying room, an equipment storage, and two cellars. Why the original design was changed is not clear; it was probably just a change of layout or foundations since the number and function of the rooms remained unchanged. The floor plan of the residential ground floor was conceived generously in terms of the number and size of the rooms, lighting, and space. Kurt Spielmann, who was familiar with Viennese modern architecture and German avant-garde, designed a richly furnished and ingeniously laid out floor comparable to the designs by the school of Adolf Loos. The house had three entrances – the main entrance on the access staircase; the northern side entrance, leading to the basement; and the southern side entrance, leading to the sunroom. Behind the main entrance, there was a hallway with stairs leading to the first floor and the entrance to the living room. Right behind the entrance in the anteroom, there was a door leading to the toilet for visitors and a door to the maid’s room. Behind the room, there was the kitchen, a preparation room with built-in furniture, and a pantry. Behind the double door in the hall, there was a large living hall, sunk down by two steps. A three-part glass door in the hall lead to the sunroom connected to the living room with a large opening. Another staircase in the hall led to the first floor.

The large hall with two staircases leading to the ground floor enabled a clear overview of the space. The northern part of the floor belonged to the lord and lady of the house – there was the bedroom of Mr and Mrs Fuchs, a walk-in closet with built-in furniture, a bathroom and another maid’s room. In the bathroom, there was a double sink, bathtub, bidet and shower, which was a novelty at that time. The guest room with a balcony was situated in the front part of the house; the southern part belonged to the children – there was a children’s daily room connected to the children’s bedroom. The children also had their own terrace; one terrace faced the garden and was accessible from both the hall and the parents’ bedroom. The residential terrace on the flat roof was accessible from the second floor, where there was a small storage area designated as a corridor and the attic.

The building recedes from the street line, established by the adjacent, existing buildings, for 4.6 meters. The street façade was quite different from the façade facing the courtyard: while the front façade was strictly symmetrical and the entrance section was to be decorated with unplastered Cyclopean masonry, like the retaining wall (although this plan was never carried out apparently for financial reasons), the back façade was asymmetrical, and thanks to large windows, it provided sufficient daylight to the residential room and bedrooms on the floor.

The two-level design of the residential floor, the effort to connect the living rooms, yet separate them with variable sliding or multi-part doors, and the contradiction between the monumental front façade and the functionalist practicality of the garden exterior make the villa an original example of luxury accommodation. The residential space was supposed to give the impression of generosity, freedom and modernity, and the nests of seating furniture, heavy floating carpets, the fireplace, the raised landings, different levels of space for various functions and private entertainment of smaller groups of people embodied some of the qualities of old aristocratic mansions and the ritualized and very organized life.

Mr and Mrs Fuchs were victims of the Holocaust; after the war, the villa became state property. Until the 1990s, the local office of Czech Radio resided in the building.

Mr and Mrs Fuchs’ villa is part of the protected urban conservation area in Hradec Králové. 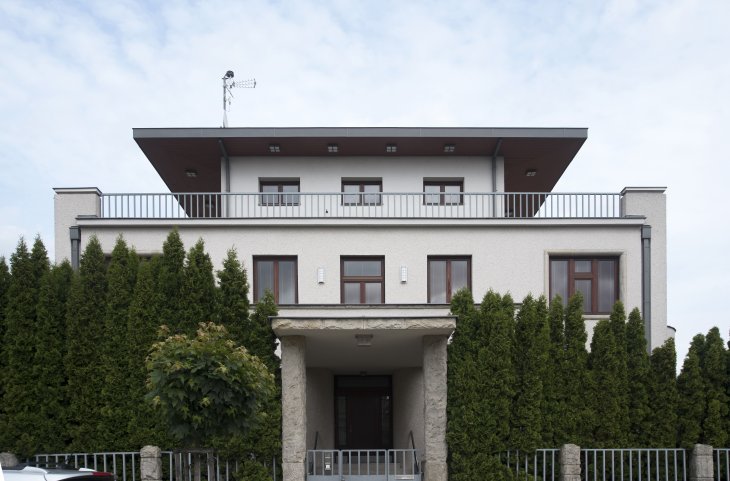 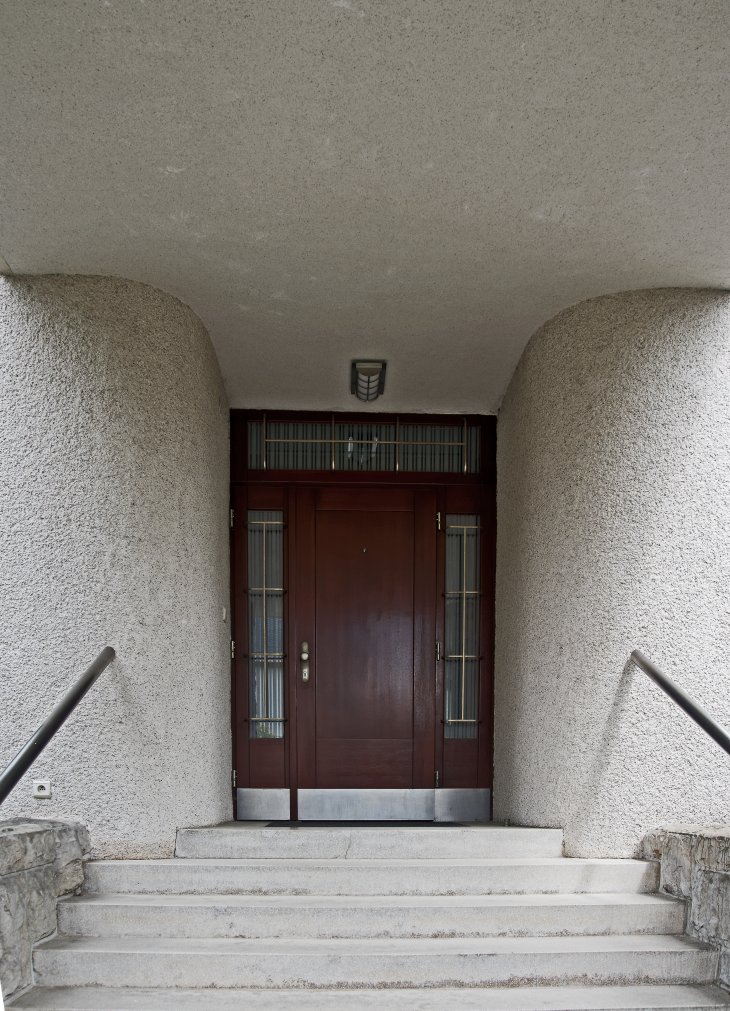 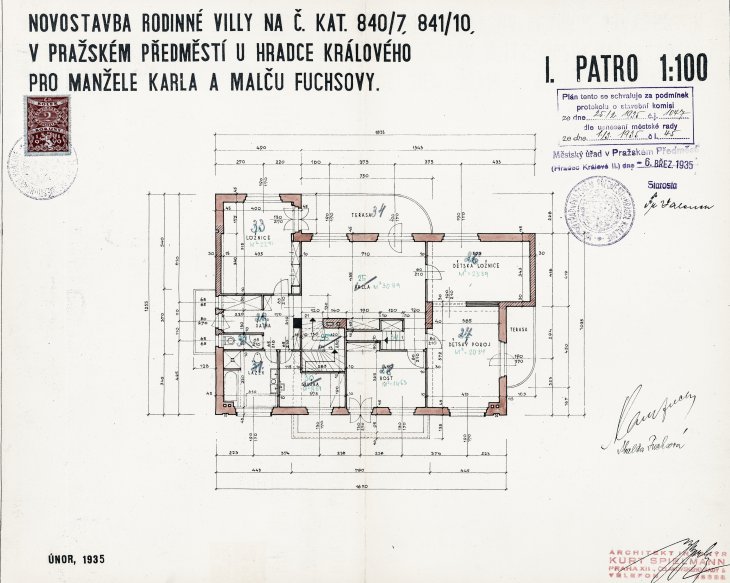 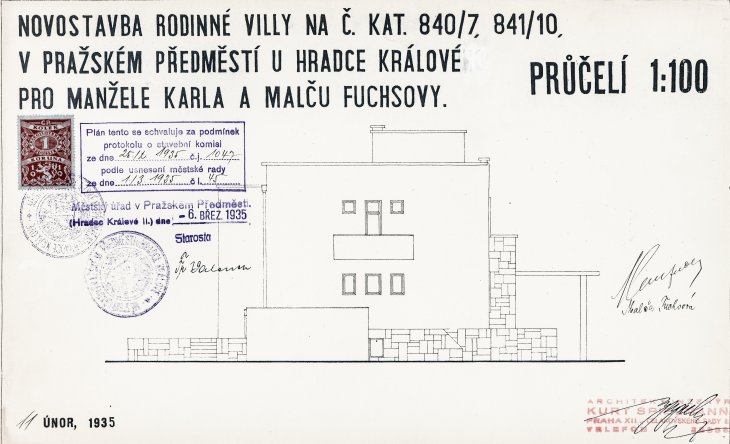 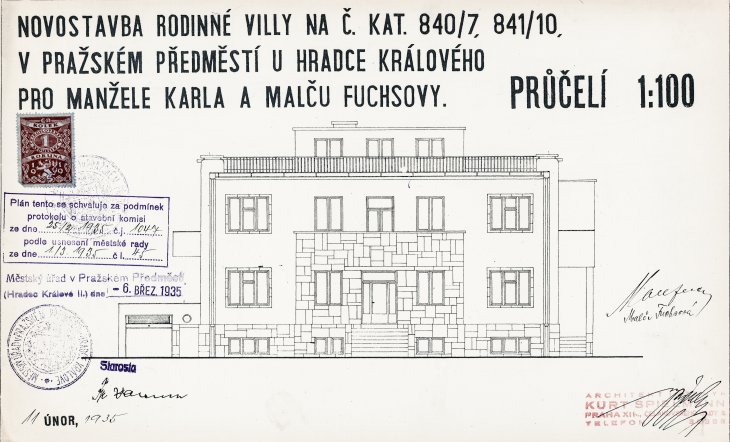 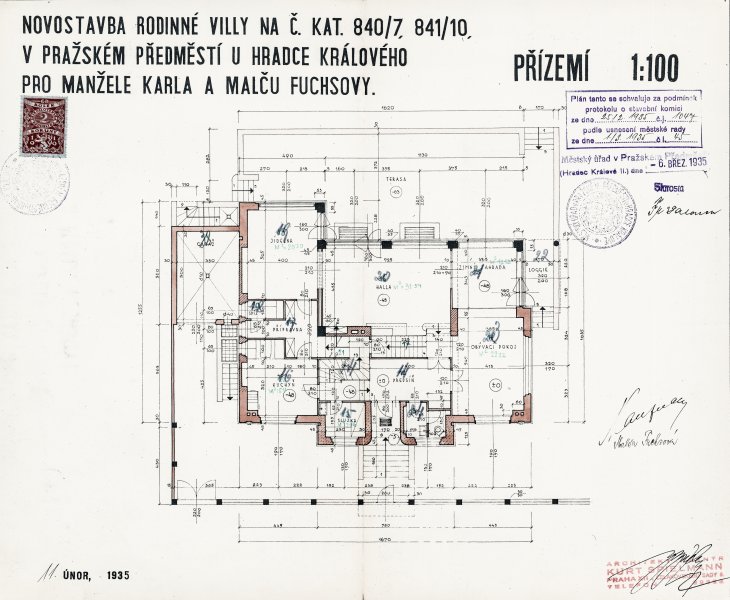 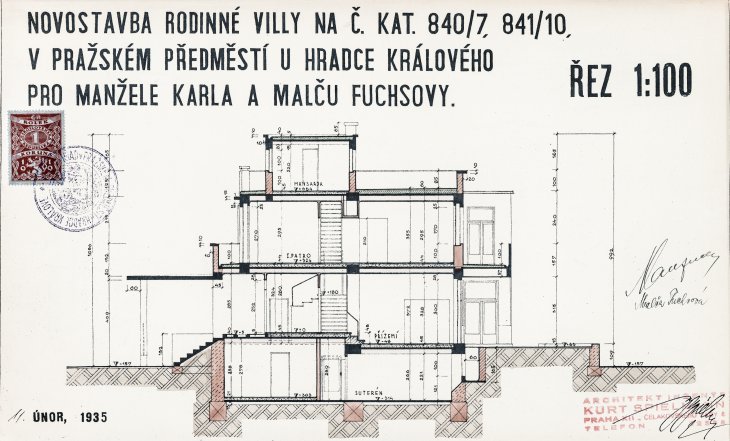 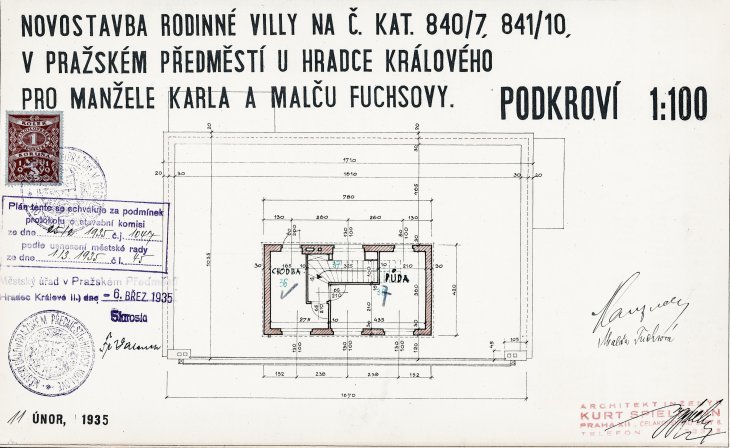 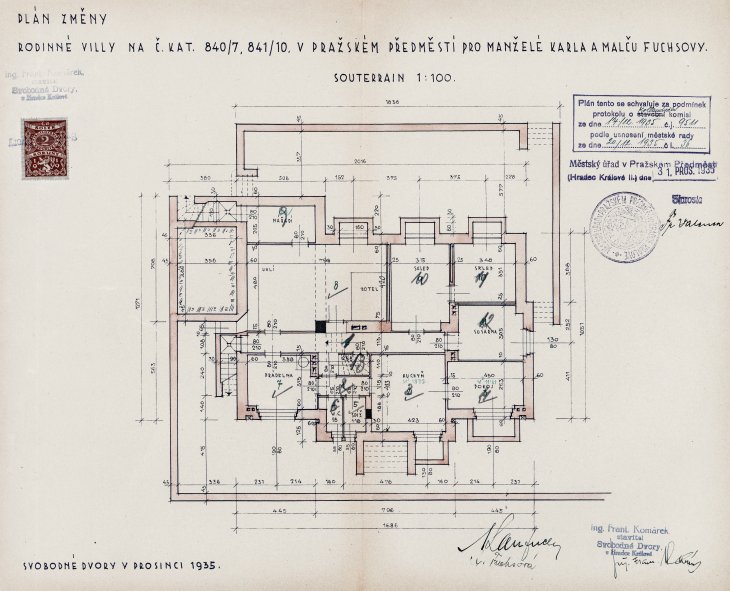 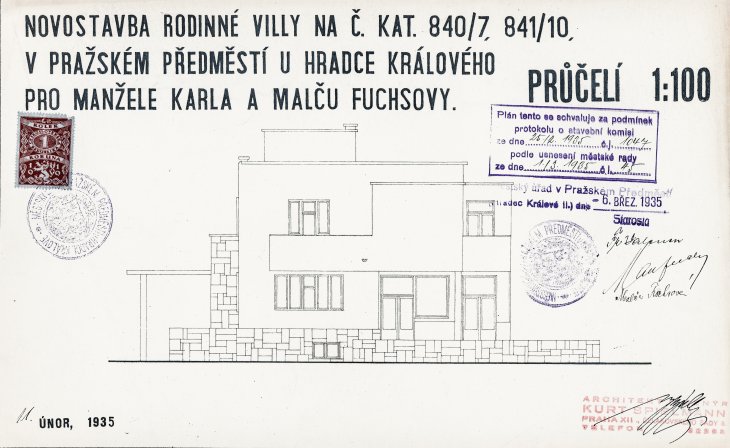