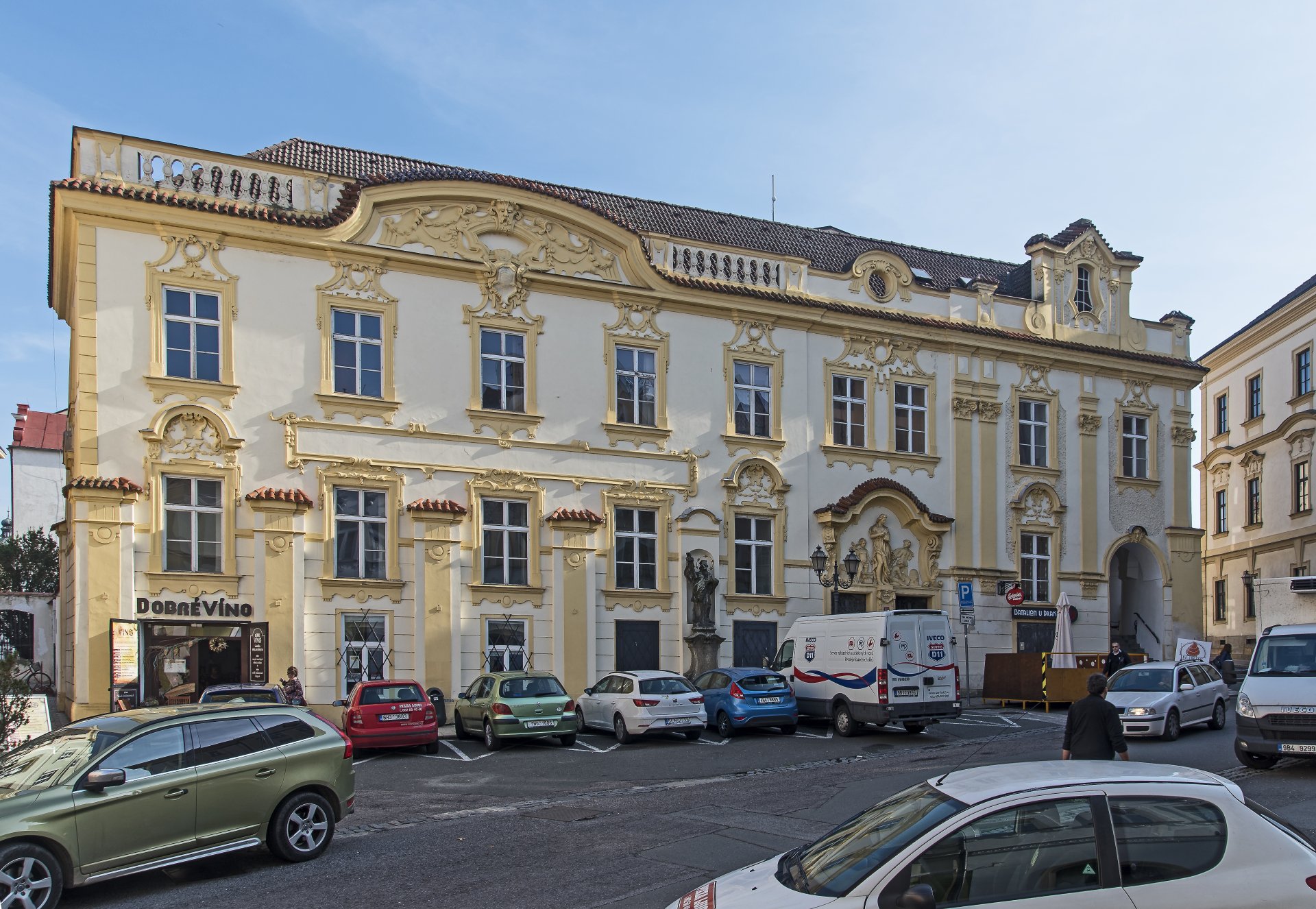 The range of architectural styles in Hradec Králové around 1910 can be very clearly illustrated by the situation in then Svatojánské náměstí Square. Many investors from the economic elite circles felt a nostalgic desire to build beautiful buildings in historical styles, even in direct confrontation with enlightened and progressive projects. Since 1909, the tone of the new era was set by one of the most successful modernist buildings in the city – Hanuš’s house designed by Vladimír Fultner. Despite its demonstrable qualities, however, Fultner’s project did not change the view of the local owners and city officials of new construction in the historic centre. This can be seen in the vicinity of Hanuš’s house where the square building development was completed by architect Rudolf Němec in 1912.

Němec designed the Civic Credit Union Palace in a Neo-Baroque style for the eastern part of the square. It was not the only project inspired by Friedrich Ohmann who taught Němec and worked with him at the beginning of his short career in Vienna and Prague. Despite possible objections to its stylistic obsolescence and collision, the building was also an example of an effort to balance the main characteristics of Fultner’s building. For this reason, Němec horizontally rhythmized and generously and plastically divided the mass. It was not indeed extraordinary that projects of so different artists stroke up a specific dialogue – let us mention the department store of V. J. Špalek located in Velké náměstí Square opposite the Jesuit house, The Lamb, also designed by Rudolf Němec.
With his project in Svatojánské náměstí Square, Němec, who was a proven expert on historical forms significantly extend the life of the genre of architectural reminiscence in Hradec Králové. His solution of the Credit Union building, however, was based on the fact that the building was not new. The corner house with a rectangular ground plan was a combination of two medieval buildings, when it got its late-Baroque appearance, and in the second half of the 19th century, it was reconstructed in the classicist style. For the needs of the Credit Union, Němec decided to modify the building in the Neo-Baroque style. The one-storey house in the square has a long main façade with nine axes. The former appearance of the building has survived in the four ground floor buttresses on the left. The short biaxial façade facing V Kopečku Street includes two arches opening a porch in Velké náměstí Square. In the middle of the main façade, which is richly decorated with stucco, there is a relief depicting a female figure symbolizing frugality and three putti above the entrance. At the foot of the building, there is a sandstone statue of St. John of Nepomuk created in 1774. Above the cornice, the façade leads to a distinctive attic with another relief, a gable window, and balustrades.
MP
Monument Preservation

The Civic Credit Union Palace is an immovable cultural heritage site, reg. on the Central List of Cultural Monuments of the Czech Republic, 25162/6-417, and part of the protected site of the Hradec Králové conservation area. 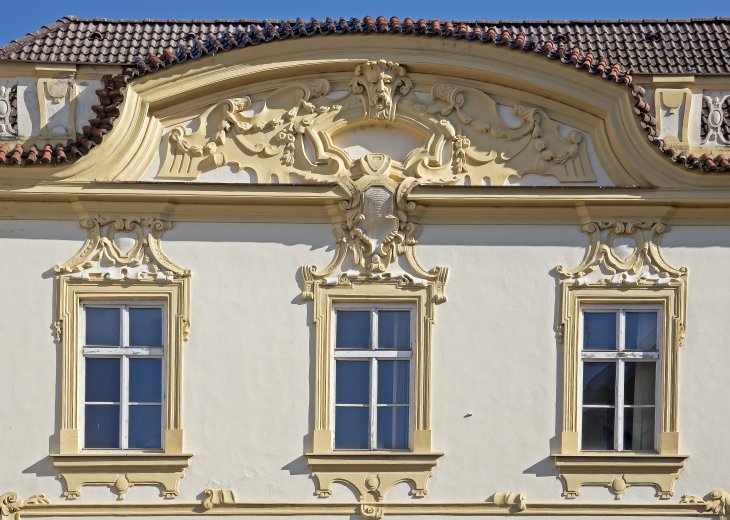 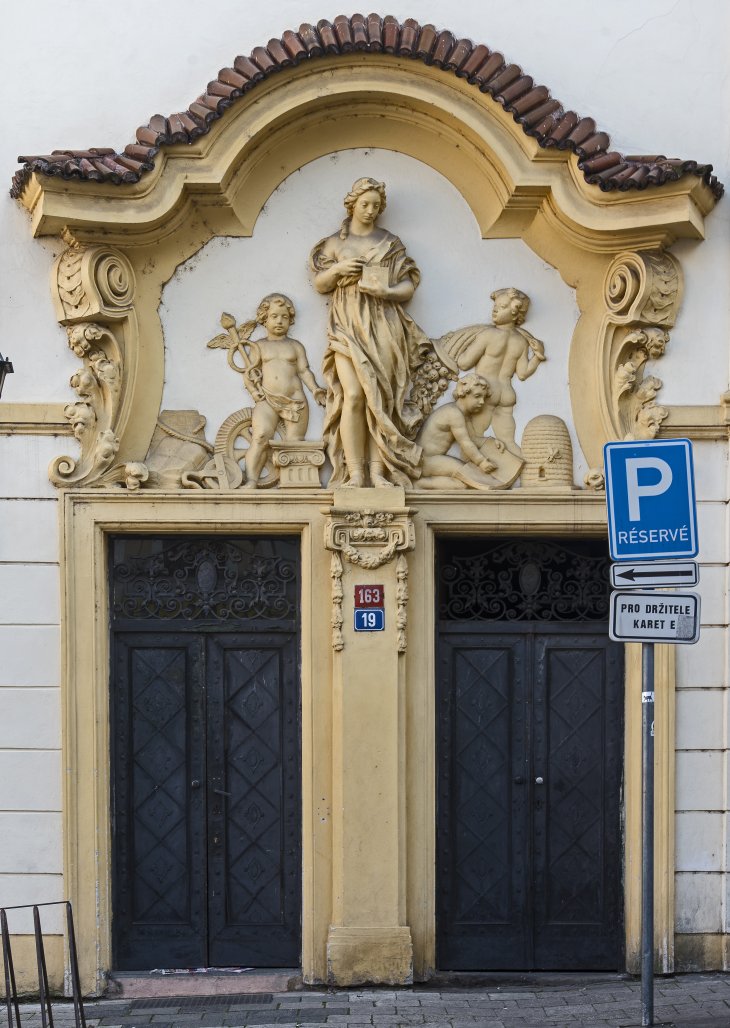 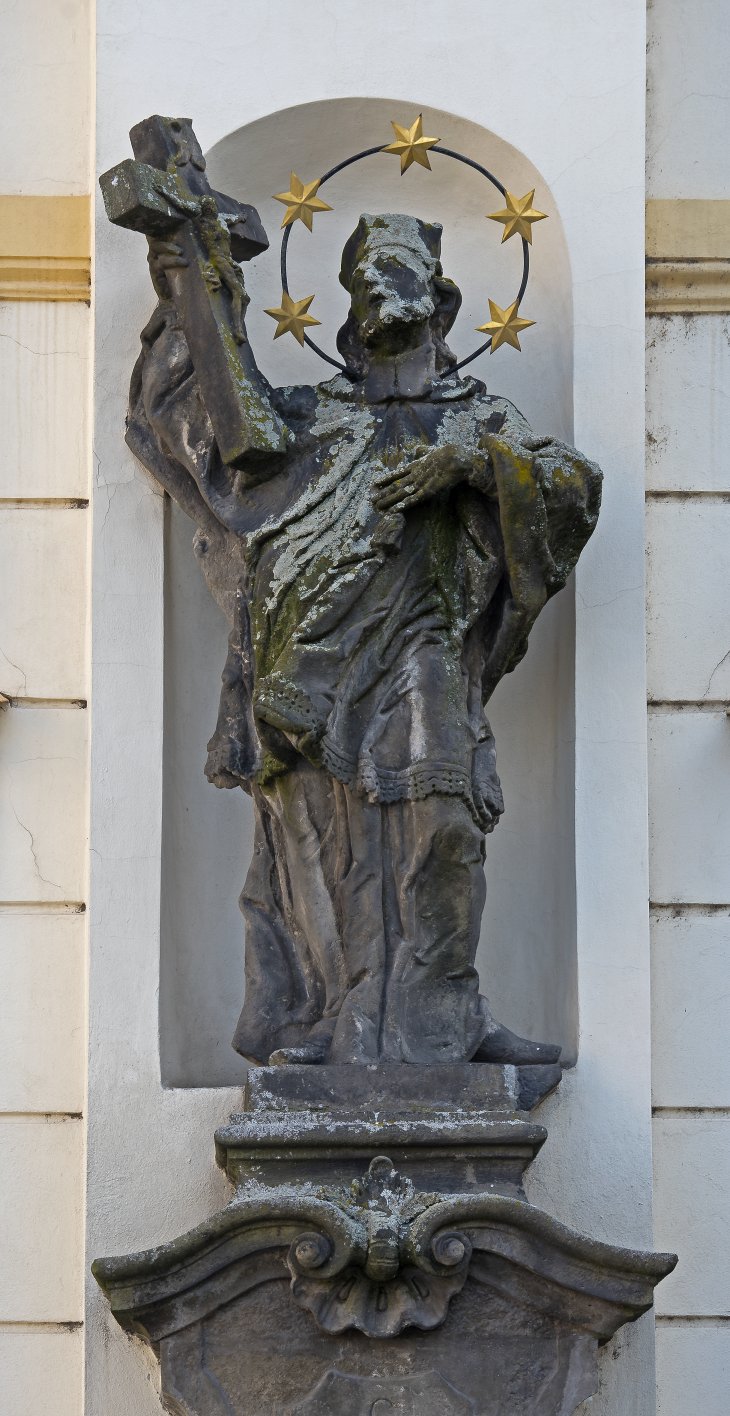