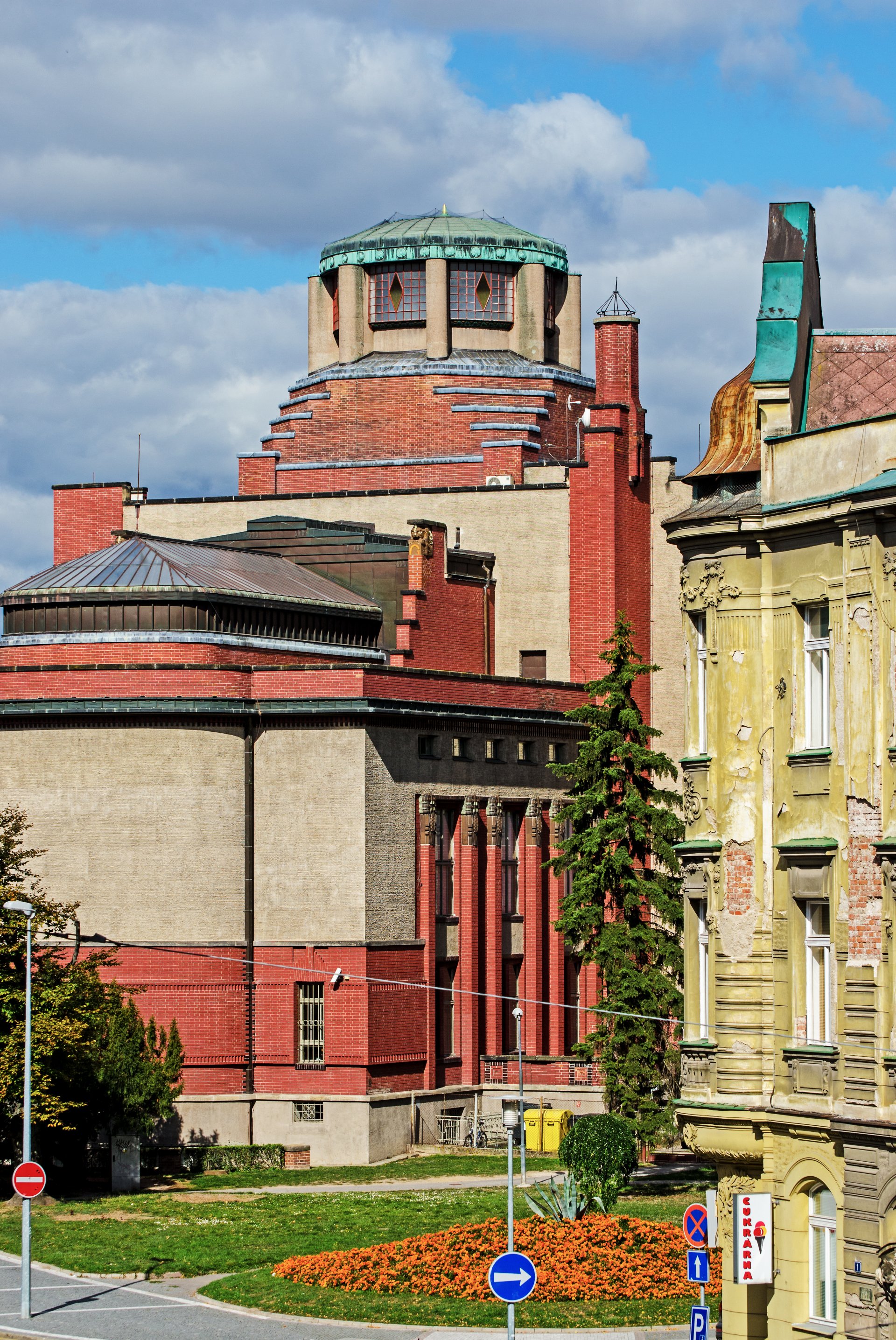 The need for a new museum building in Hradec Králové was evident already in the early 1890s. In 1895, Mayor František Ulrich, who was also a member of the board of trustees of the city museum and of the subsequent “Board of the Industrial Museum”, initiated the purchase of a plot of land on the first city ring road where a synagogue was built later on. In 1898, architect Jan Koula submitted his design of the museum. It was to be an irregular block building with a corner tower. Koula designed the prestigious public building in the style of Renaissance, which was an obvious choice for many other similarly important civic buildings at that time. Koula’s designs have survived and although they demonstrate a sophisticated and functional circulation of visitors in the museum building, their conservative architectural form did not impress Mayor Ulrich, so their cooperation did not continue. The shortcomings of Koula’s design can be summarized as follows: “A probably too general assignment, an effort to deal with every function of the museum separately, or the fact that the architect did not agree with the plot of land may have affected the tentative result” [1]. Eventually, the plot on Okružní Street was abandoned because it did not provide enough space for further expansion of the institutions.

The first mentions that the project was to be designed by Jan Kotěra can be found in the architect’s letter to his friend Richard Gombrich from 18 December 1904 [2]. Already in 1905, correspondence between the museum board of trustees and Kotěra, concerning the concept of the future museum building, took place. The board of trustees included Otakar Klumpar, his wife Marie Klumparová who was a full-fledged member of the board even after her husband’s death in 1915, Jaroslav Červený, Josef Pazourek, Karel Trapp, František Ulrich, and Ladislav Haněl, the chairman of the board and director of the local locksmith school. At that time, the design of the building was symmetrical along the longitudinal axis: the reading room with the library was to be in the north wing, but the offices of the archivist, secretary and director were not added until 1906 when the project already had its characteristic asymmetric layout. Architecture historians later associated this effect with the concept of the windmill layout, promoted by American architect Frank Lloyd Wright in his designs of prairie houses [3]. Although Kotěra knew Wright’s designs, the dynamic layout of the museum in Hradec Králové was based on the change of the functional composition of the ground floor space. However, Frank Lloyd Wright used the windmill layout only for private houses.

Two prominent Kotěra’s employees worked on the project: Josef Gočár, who also signed some, almost final designs, in the spring of 1908, and Otakar Pokorný, who had previously led Kotěra’s design office and the construction of the National House in Prostějov. Bohumil Waigant, Kotěra’s employee and brother of sculptor Antonín Waigant, might have worked on the project as well but his contribution has not been confirmed in any documents. Antonín Waigant decorated the museum interiors.

Between 1906 and 1908, the building layout and the extent and form of both the exterior and the interior decorations changed. While the axonometric designs from 1907 show that the entrance middle tract was to be concave and decorated with Art Nouveau linear ornamentation, the definitive plan from the autumn of 1908 envisaged the recessed form and the alternation of smooth and coarse plaster and glazed and unglazed brickwork. The use brickwork had a symbolic meaning. The unplastered brickwork next to the former Joseph II’s stronghold referred also to the local Cathedral of the Holy Spirit built in the style of Silesian Gothic, thus becoming a visual symbol of urban architecture. However, the ornamentation was reduced, the façade simplified and the glazed brickwork emphasized mainly for financial reasons. Drastic cuts were made in the summer of 1908. “We have to substantially simplify the façade. The compositions and shapes cannot be changed much, so the construction will be simplified by using cheaper materials. For this purpose, I will reduce the use of stone to a minimum, and now I am working on the façade so that the building base would be made of concrete. [...] The ground floor and the major tectonic division of the other parts of the building would be made of brickwork. All the remaining surfaces would be plastered only roughly,” wrote Kotěra to the board of trustees [5]. Yet, the exterior featured ceramic details, reliefs and pinnacles on pilasters designed by sculptors Karel Pavlík and Antonín Waigant and made by Rydl & Thon, Svijany-Podolí. These features were installed in the fall of 1911.

According to the construction journal, the rough construction was carried out between the beginning of 1909 and 1911 when the interior partitions were built and the ceilings stress tests made. The construction of the building, which was supposed to be roofed by the end of 1909, was slowed down by supply cuts caused by František Tomášek’s brickworks in Vysoké Mýto and complaints about defective bricks. The building had two very different contractors: František Jirásek, who specialized in concrete work and for whom the museum project was his first large contract, and Josef Jihlavec, who coordinated the masonry work and for whom the museum project was the last contract before retiring. There were heated arguments between the two, which culminated in complaints and billing wasted time in the summer of 1910, when first, Jihlavec could not work because of Jirásek’s delay and later, Jirásek could not work due to the delay of Jihlavec’s workers. In the summer of 1911, monumental statues of queens, designed by Stanislav and Vojtěch Sucharda and manufactured by RAKO Rakovník, were added to the building. The statues have no clear explanation; historians and art historians are inclined to interpret them as an allegory of a glamorous era in history – the medieval era of the dowry town of Czech queens, the Jesuit baroque town where a bishopric was established. Modern times and freedom from the “bondage” of the Joseph II’s stronghold is symbolized by the bronze statue of a young man, seen as the personification Mayor František Ulrich by some people. The contemporary press wrote: “Hradec Králové is personified here as a young man with mighty muscles and a chest, who manly and hopefully enters the fight for prosperity and development despite the bad times.” [6]. Others saw the statues as allegories of applied arts and history, but it was not clear which was which.

However, the final appearance of the museum building evoked strikingly contradictory reactions among architects. On the one hand, Rostislav Švácha saw the “nature of work” in it and Josef Chochol noticed its “machine look”. On the other hand, young avant-garde architects were irritated by its monumentality and decoration. Karel Teige disliked the “heavy oppressive pathos of mass” and the colourful sculptures designed by Sucharda and giving in to “fashion”. Pavel Janák was not entirely positive about Kotěra’s design either: “The domestic development turned from the intimate hazard to a solid construction again, but with a certain redundancy and complexity of decorative forms.” Josef Chochol claimed that “the expression includes previously valid, but now vanishing features of some kind of pathetic grandeur and somewhat make-believe prime festivity” [7].

Kotěra’s office designed all the interiors – the lighting, the furniture for speakers in the lecture hall and anterooms (manufactured by Josef Nevyhoštěný), the folding seats in the lecture hall (manufactured by Thonet), the director’s room equipment (produced by Tržnice nábytku, a local company), and the library and reading room furniture (manufactured by Josef Nevyhoštěný). The first and second floor foyer was decorated with stained glass designed by decorator František Kysela, who was Kotěra’s classmate from the Academy of Applied Arts in Prague, and made by glass-maker František Uhlíř from Třebechovice. The dome tambour in the second floor lobby is decorated with four mosaic fields, originally designed by Kotěra’s collaborator, painter Jan Preisler. However, all the mosaics were not installed until Kotěra’s and Preisler’s death – one in 1931 and the remaining three at the turn of 1940 and 1941.

In 1919, Jan Kotěra updated the design of the building extension and designed the exposition and storage furniture for the exhibition halls and depositories – dustproof cabinets with black frames. In 1942, a competition for the completion of the museum took place, and Jan Rejchl, Josef Gočár, Ladislav Machoň, Bohumil Hübschmann, and Fratišek Krásný submitted their designs. Rejchl’s design, which respected the original Kotěra’s project, but also included the necessary innovations, won the competition. However, the project was not carried out due to the prohibition of construction. The museum underwent partial reconstruction in 1960–1964, 1969 and 1975 (roofing of the underfloor yard). Between 1984 and 1988, the exterior was completely renovated according to the project by Jaroslav Andres. In 1999–2002, the museum interiors were completely restored. This general reconstruction was followed by the rehabilitation and restoration of the statues on the façade in 2003–2004. Between 2018 and 2019, another general restoration of the exteriors and sculptures took place. 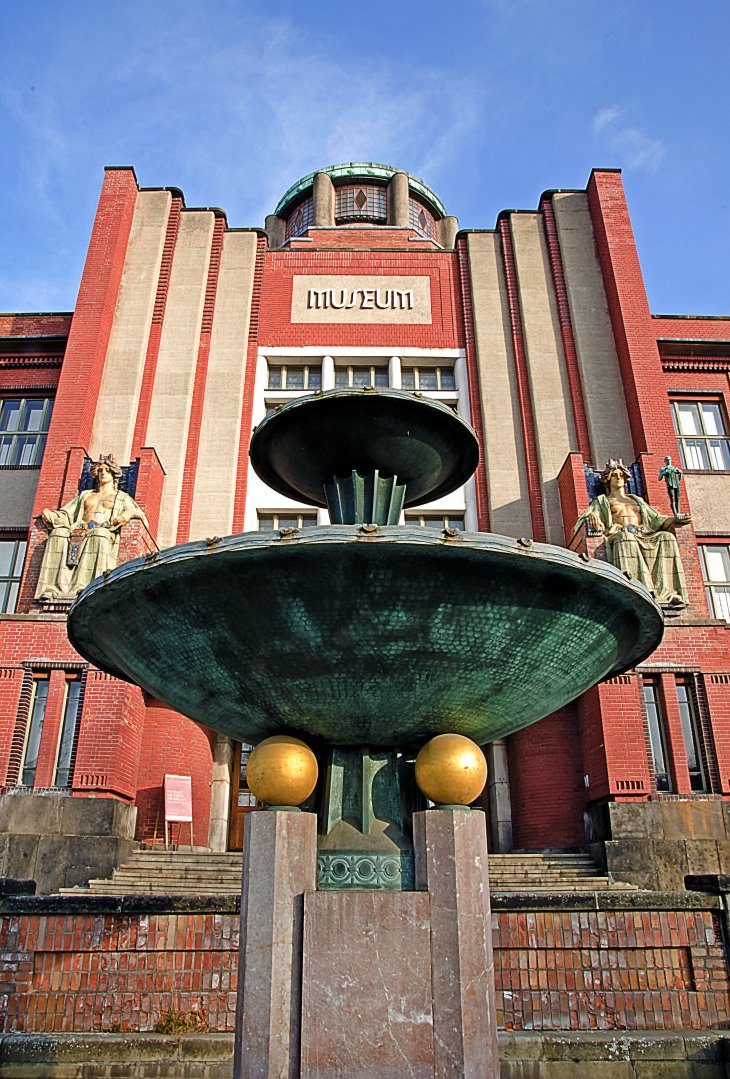 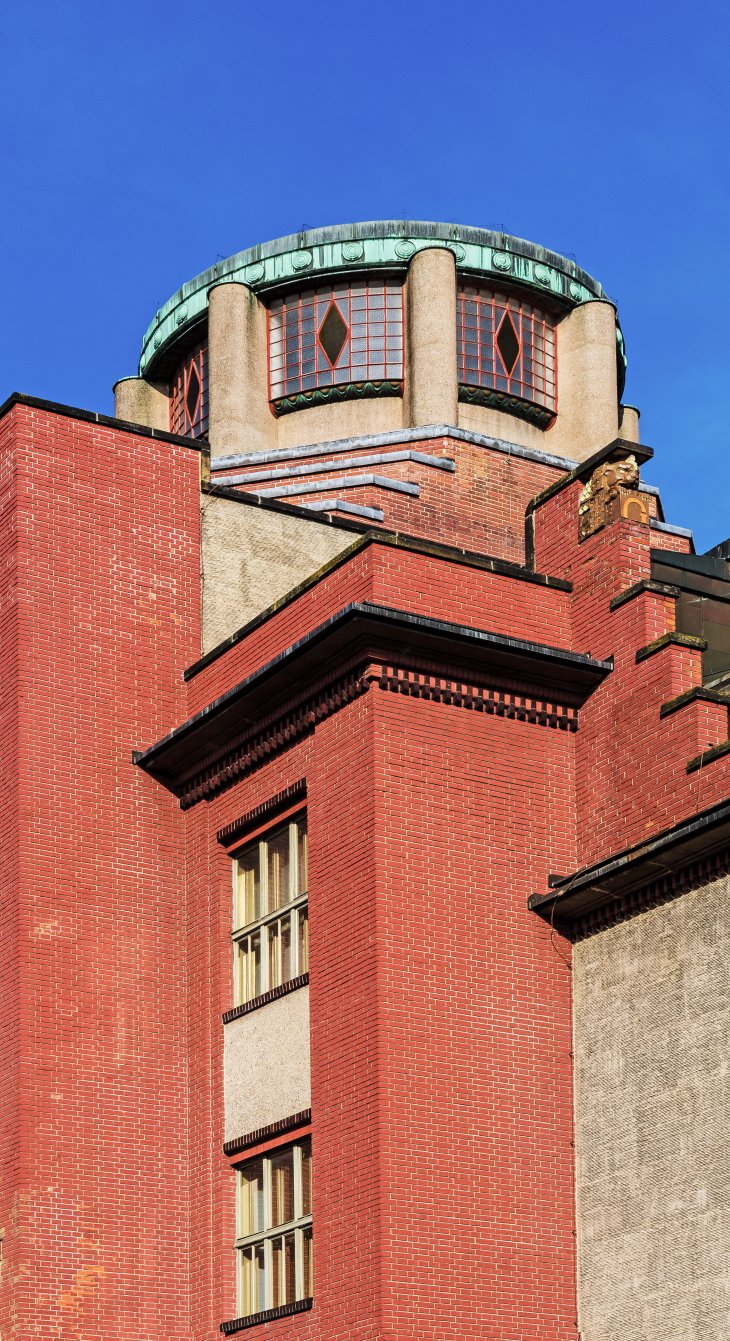 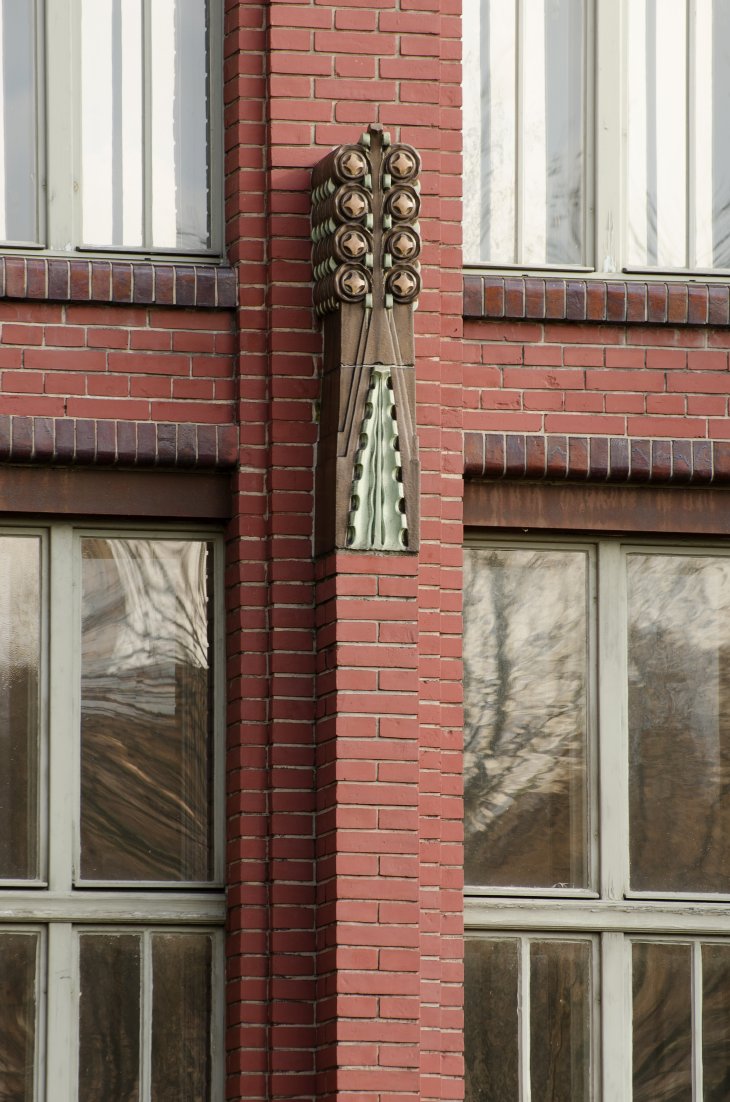 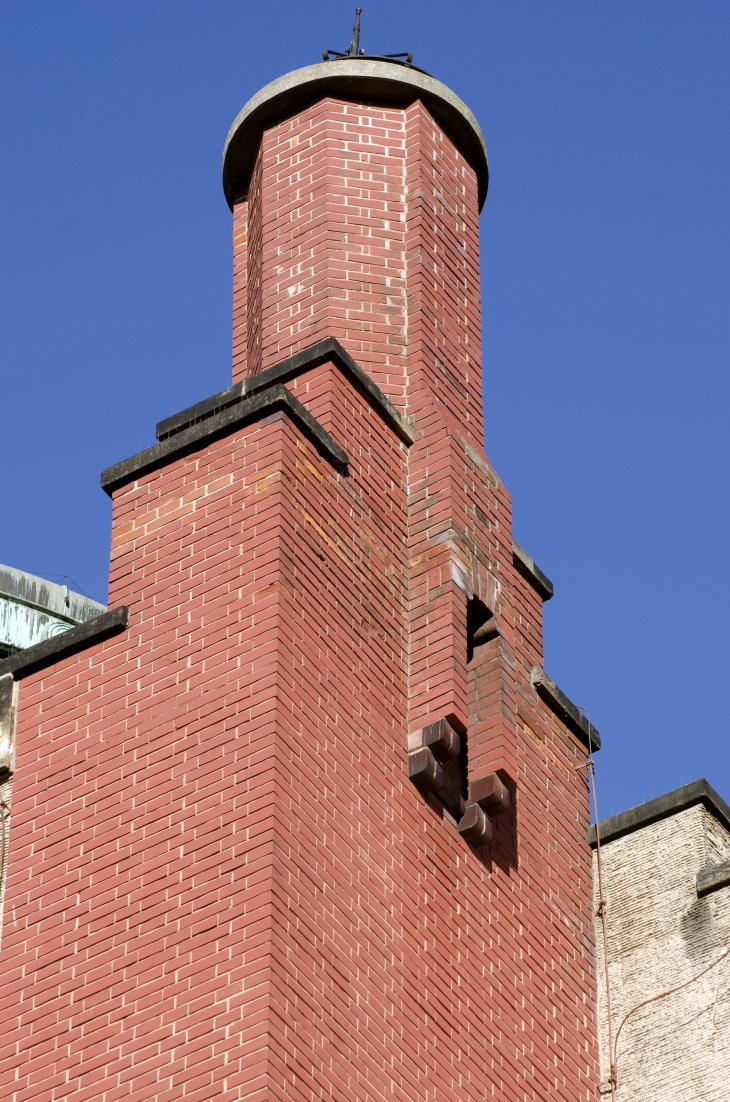 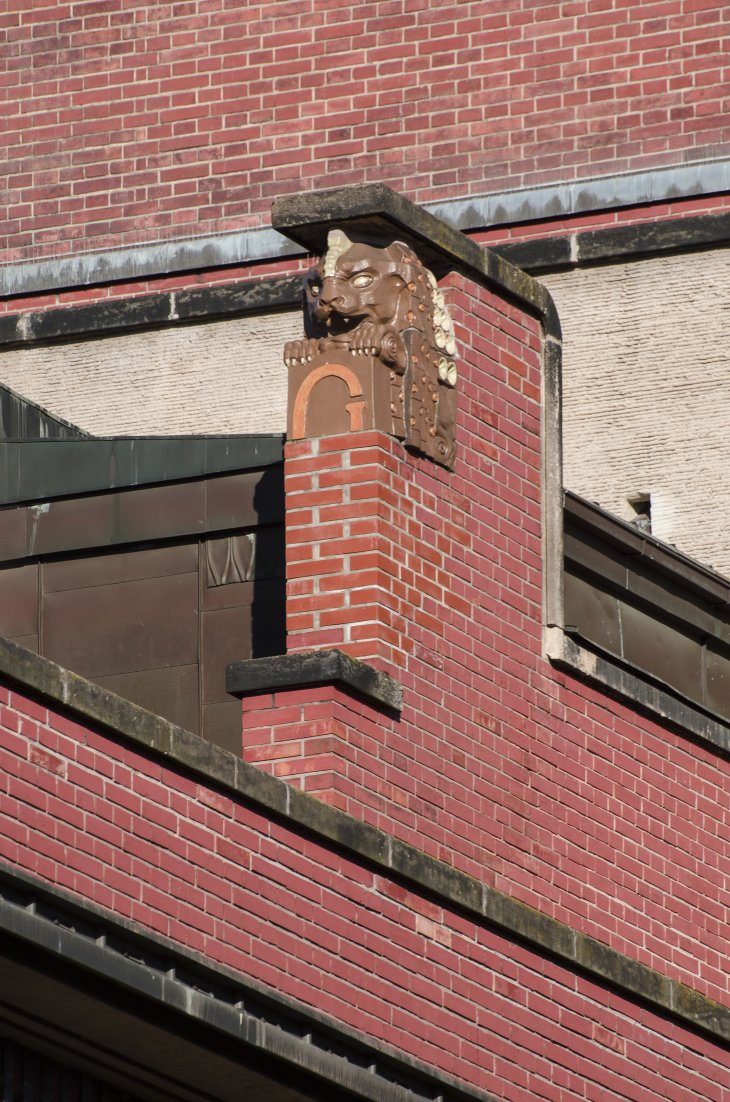 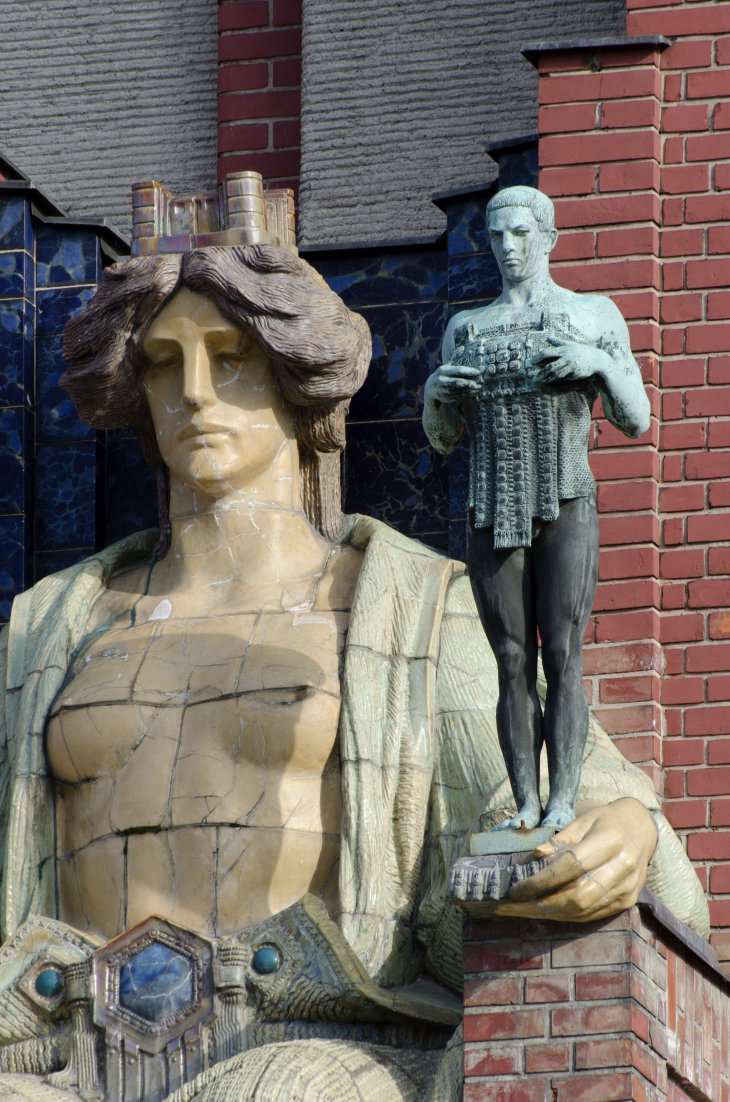 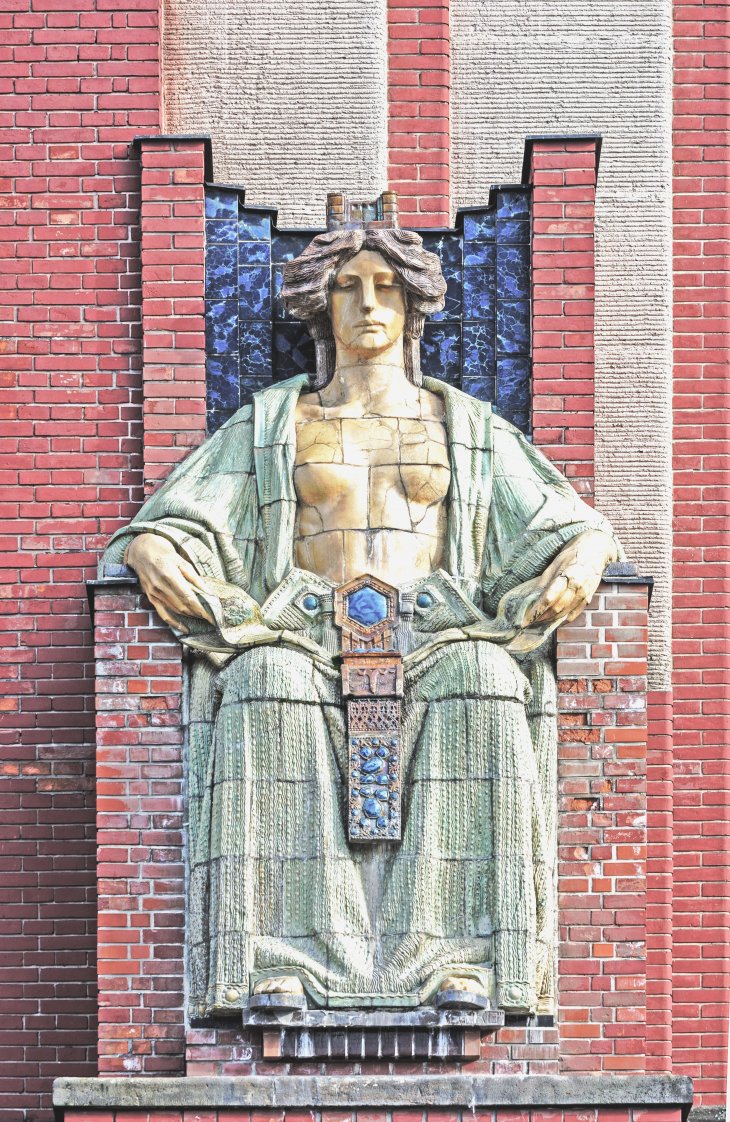 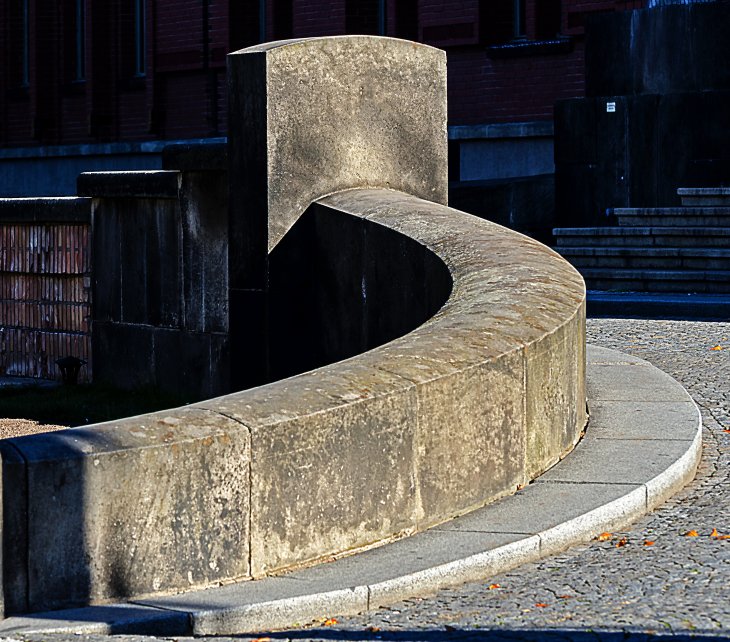 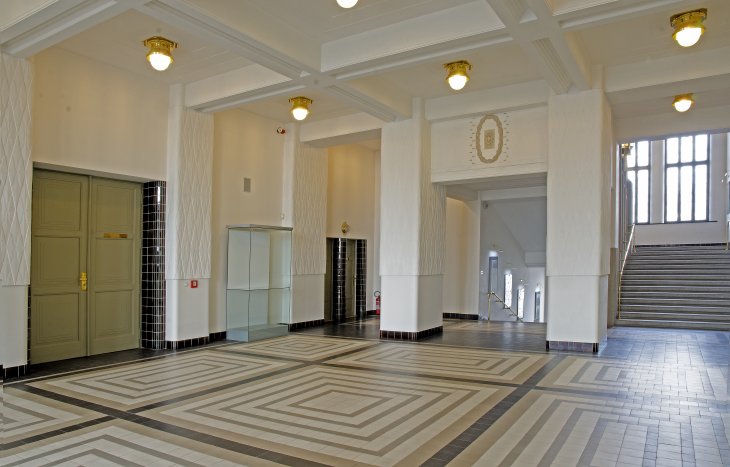 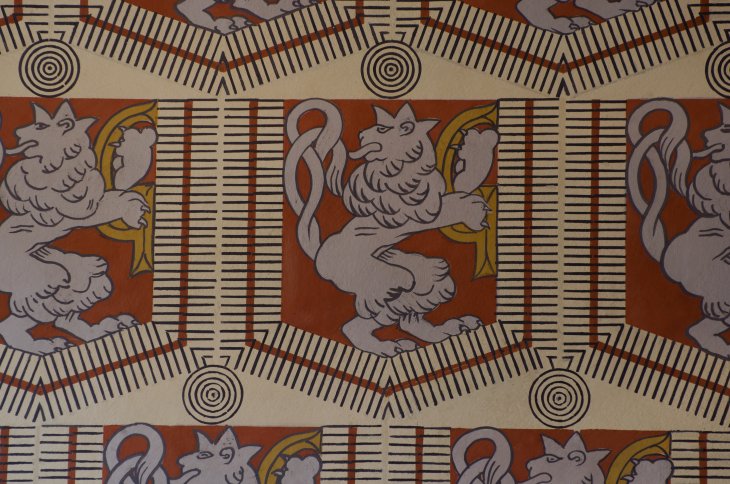 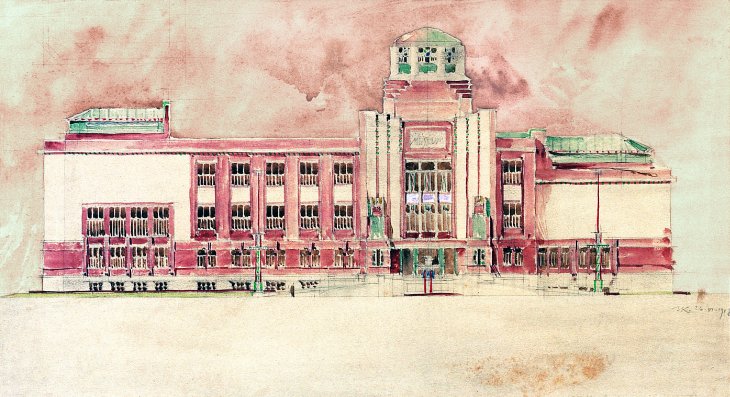 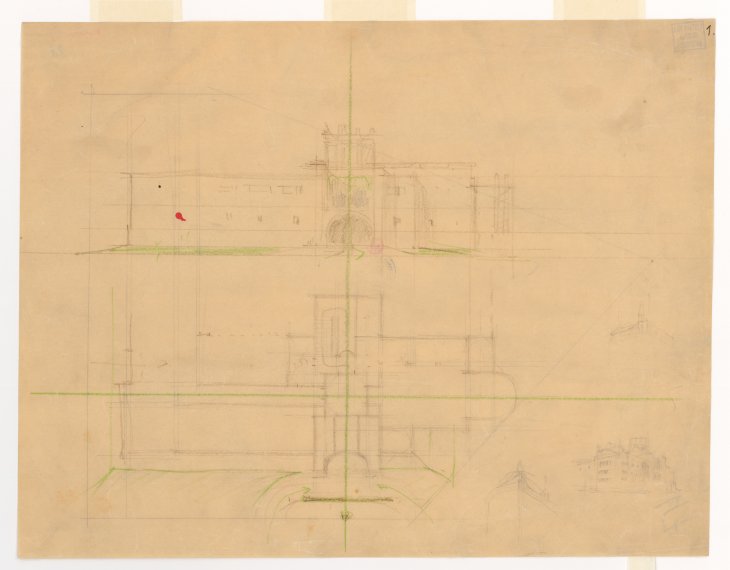 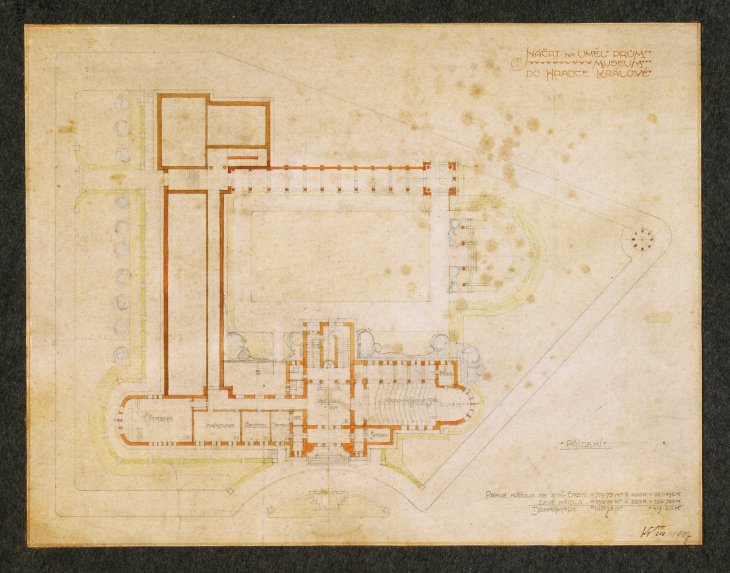 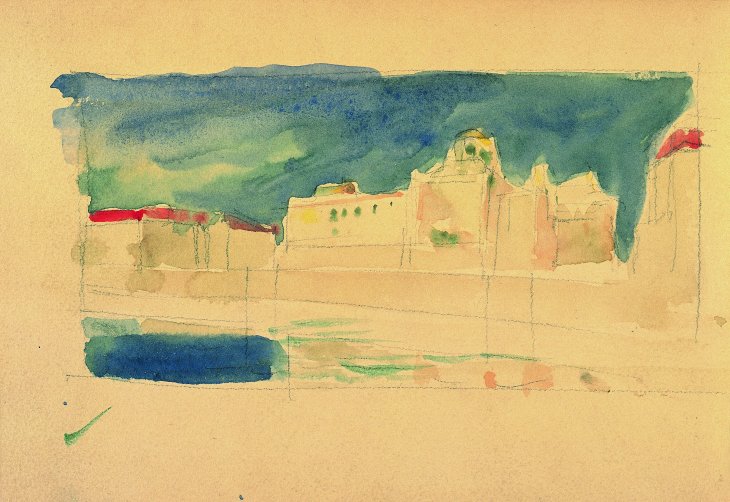 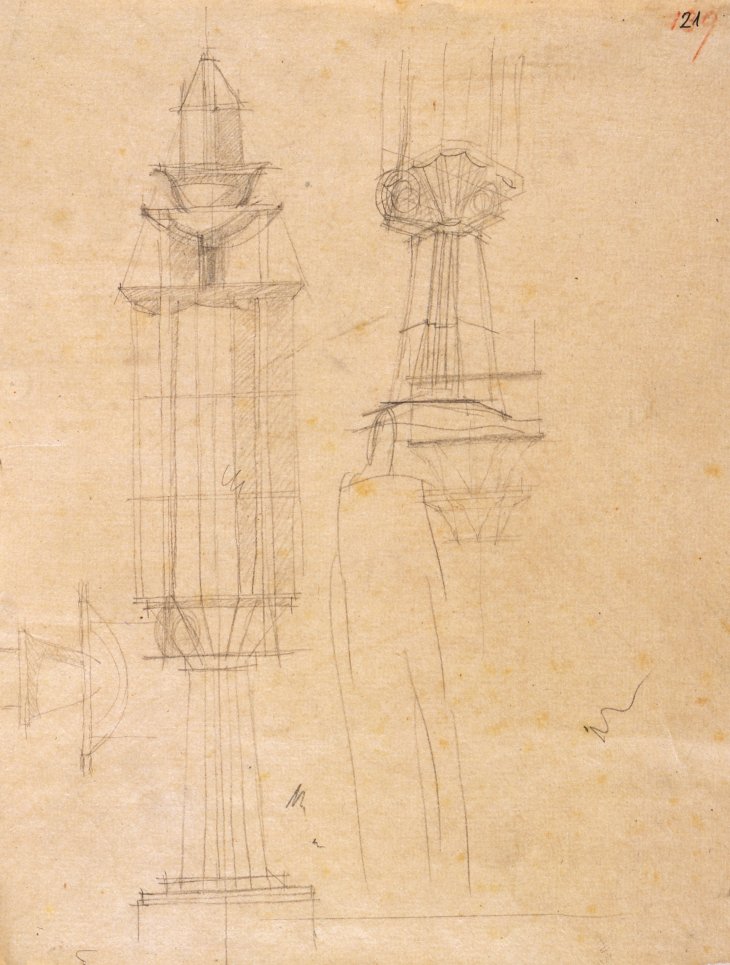 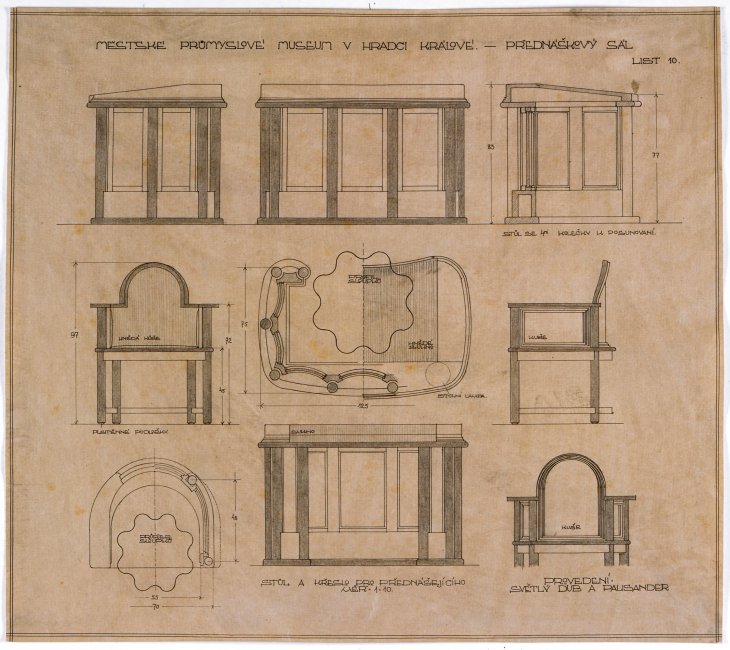 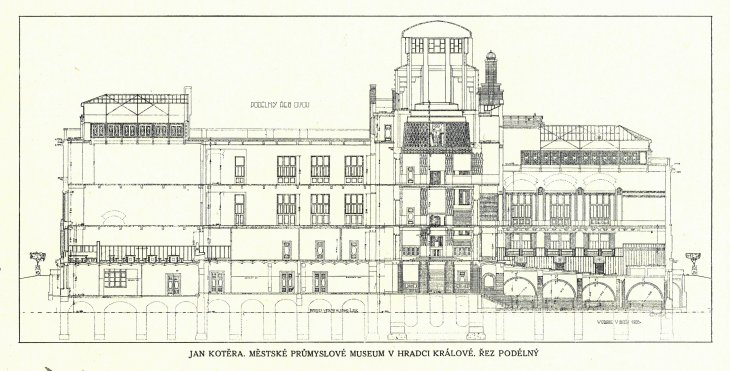 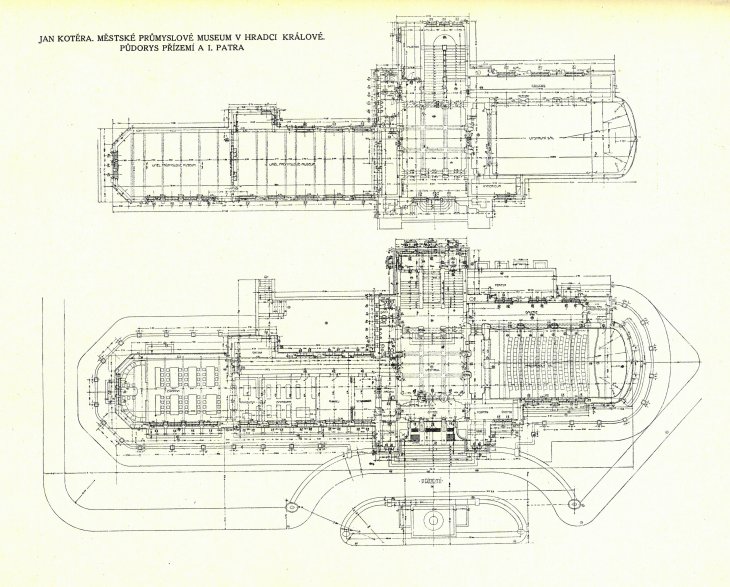 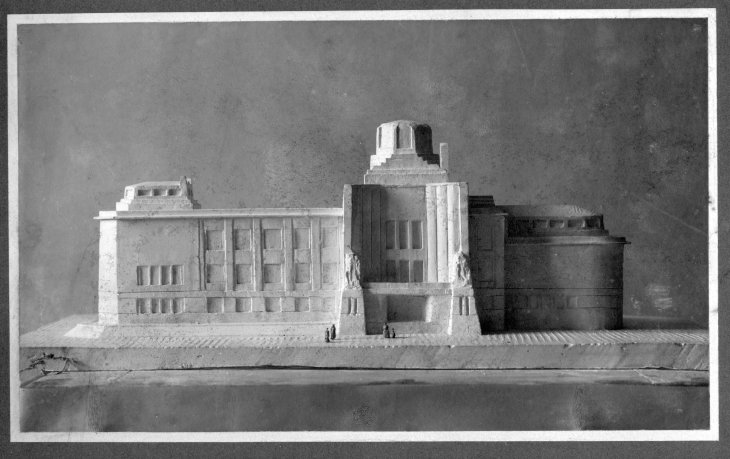 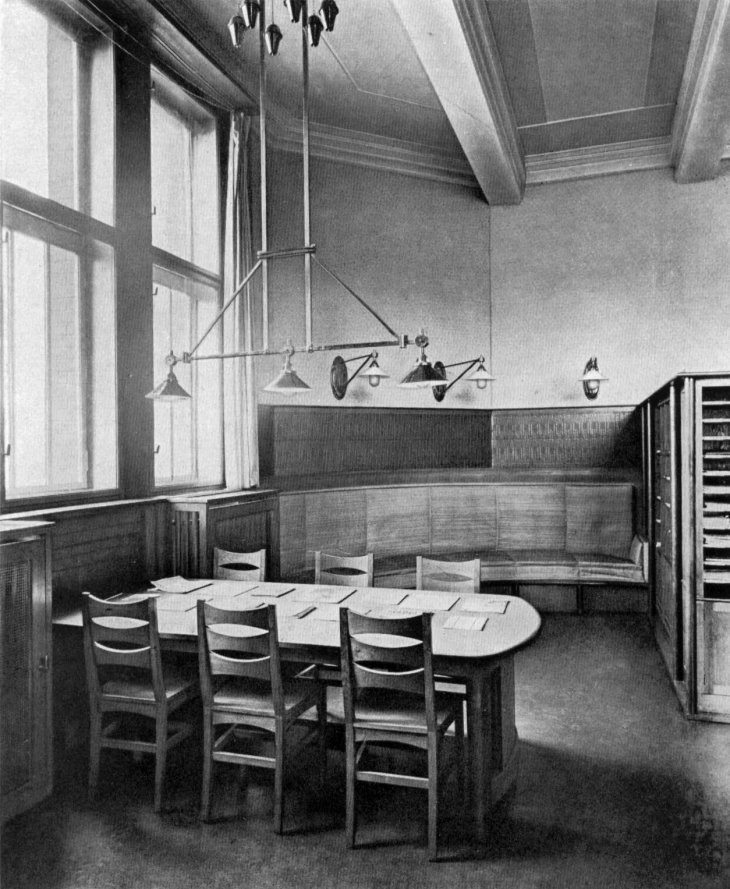 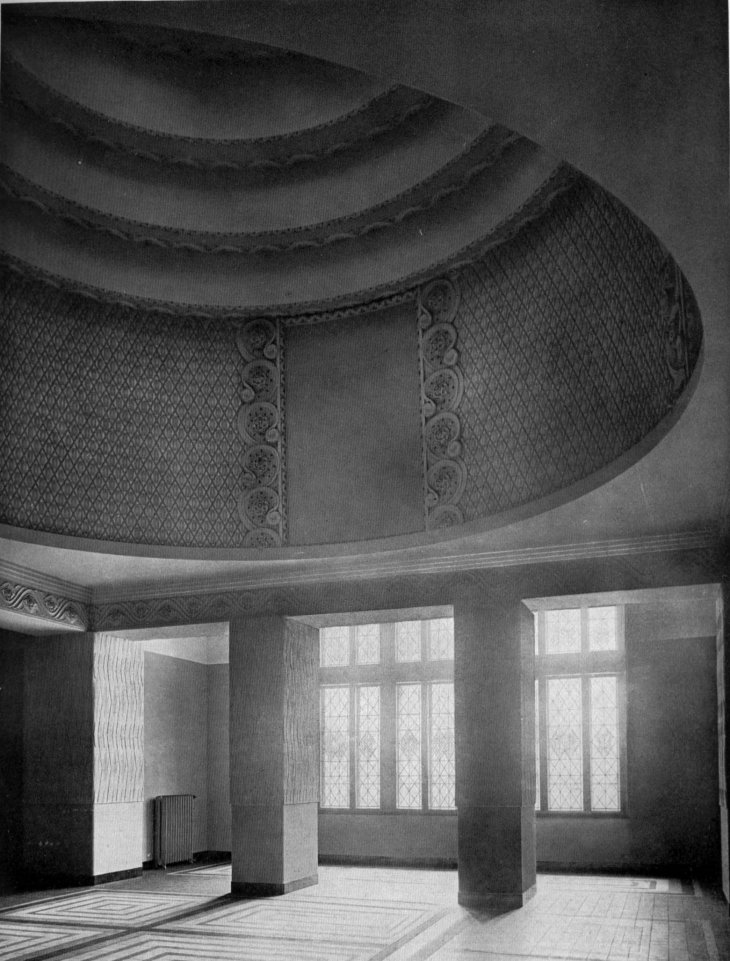 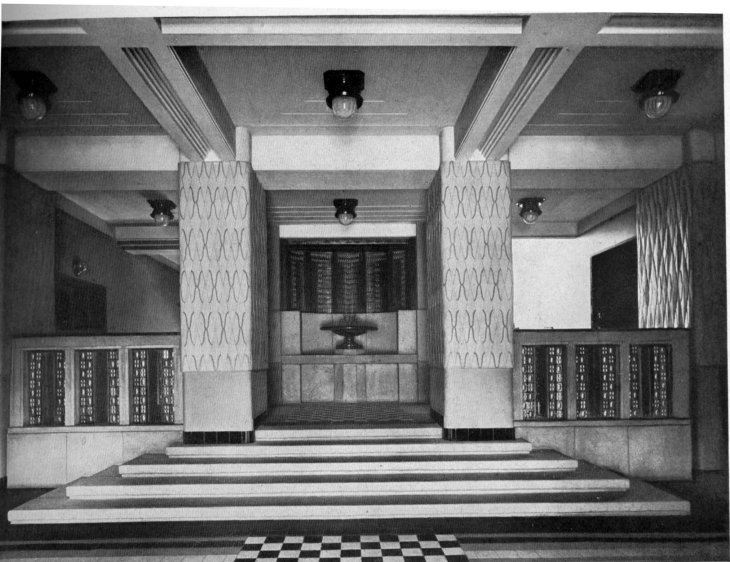 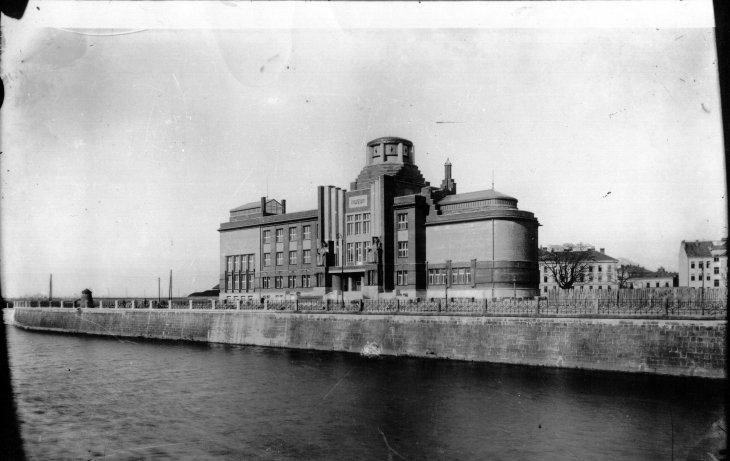 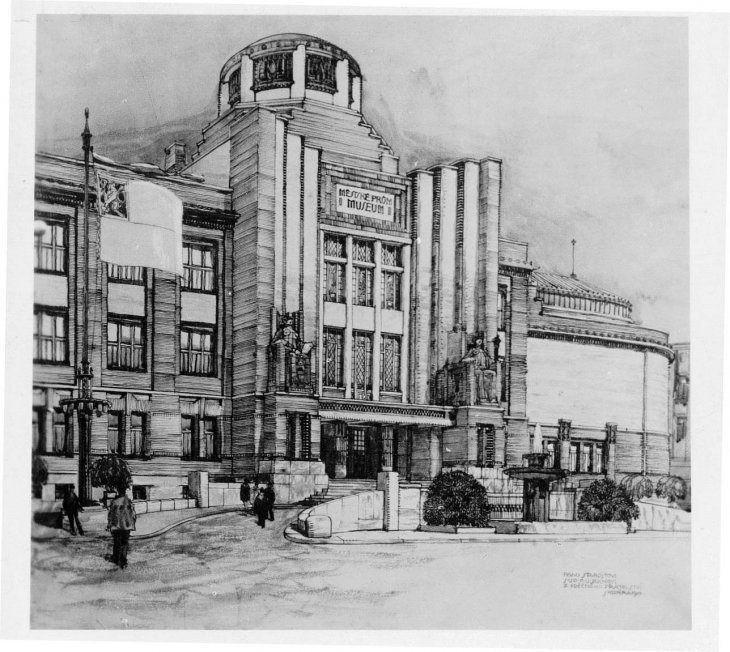 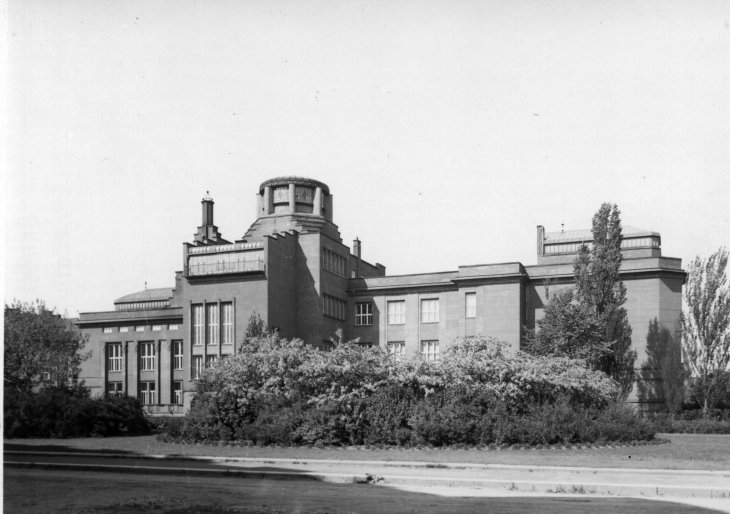