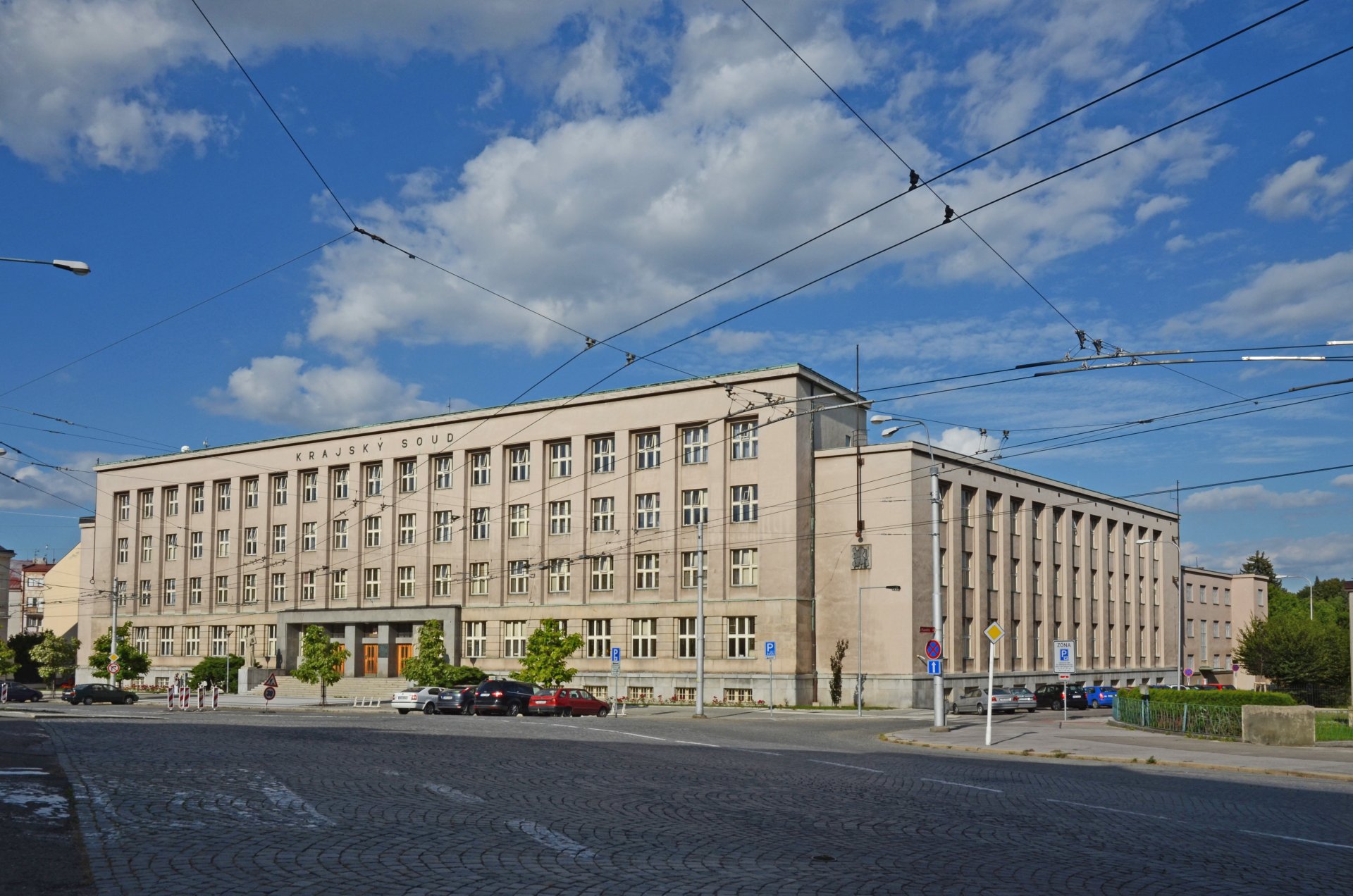 The need to build a new court building was discussed since 1919. The critical situation in the old town hall (where the Regional Court resided since 1849) in Velké náměstí Square was pointed out by the local press as well: “Some offices have been set up in dark corridors, and with the expected increase in their number, they will [probably] soon be found also in toilets, in the attic and cellars… The blind, ill clerks prematurely suffer from tuberculosis caused by the lack of sun and air...” Since 1919, the Czechoslovak judicial authorities started to seriously consider building a new court building, and the city of Hradec Králové promised to donate a plot and the amount of 1 million crowns. The project was pushed through and carried out thanks to Minister of Justice Dr. A. Meissner. Despite the insufficient state investment budget, he suggested a solution: the city would get a construction loan (and pay the interests) and the state would pay the construction costs until the construction was finished. The pentagonal plot for the construction of the court and prison was originally the site where the last surviving part of the local stronghold was demolished in 1929–1930. In March 1933, the city gave the plot to the judicial administration; in April, a contract with the government was signed, the construction entrusted to the city and the payment of the compensations agreed upon. Václav Rejchl adjusted the building layout to the shape of the stronghold to commemorate the past. However, he had suggested building a public building on this plot in his regulatory plan already in 1909. The layout of the building copied the shape of the stronghold, enabling the architect to move the street façade backwards, away from the street front. In 1931, the Ministry of Public Works asked four architects to develop a project. In June 1931, Václav Rejchl Jr. was asked to draw designs. He was asked to finish them in four months, which he did in 1932. The first president of the Regional Court was Josef Wolf.

The construction was launched by builder Robert Schmidt in August 1933, the supervision carried out by architect Josef Fňouk. The construction was originally spread over three years. Offices were moved to the new building in the first week of October 1934. The opening ceremony was held on 21 October 1934 in the presence of Minister of Justice. The court building was completed in 1935; however, it was not approved until 1936. In 1953–1954, Václav Rejchl Jr. became a prisoner in his own building – he was arrested for his construction business at that time. He was posthumously rehabilitated in the 1990s.

The three-storey façade with artificial plaster is 67m long. The ground floor façade was covered with sandstone, the entrance and the wall dado with granite slabs and blocks. The main building is adjacent to two-storey houses for guards; the block also includes a prison, separated from the courtyard by a high wall. The façade looks simple and “monumental, as the importance of the building requires”; its monumentality is further enhanced by a high granite wall dado, lesenes, and the entrance covered with stone and lined with statues.

The sculptural decorations in the “judicial” style were ordered from three famous sculptors in 1934: the architect’s friend Josef Škoda from Hradec Králové, Ladislav Beneš from Častolovice, and Professor Josef Bílek from Hořice. They were short-listed by architect Rejchl and builder Fňouk. In March 1935, the contract was won by sculptor Bílek, although the architect was not happy about his concept. Bílek designed the figure of Law as a Roman young man with a gesture of truth – with his hand on his heart. The figure of Justice was designed as a woman with weights, lifting her hand to take an oath. On both sides of the building, there are feather flagpoles, a granite state emblem and an inscription on the main façade designed by the architect. The entrance hall has a wall dado panelled with travertine imported from around Spiš in Slovakia. The stonemason work was carried out by Václav Škoda’s company.

The pentagonal layout of the building forms a closed block. The building is divided into a judicial and prison section. The four-storey entrance tract is connected to lower side wings with a large courtroom in the centre of the court. In the basement, there were archives, a depository and operating rooms; the ground floor housed the district court, the first and second floor the regional court, and the second floor the public prosecutor. Behind the entrance, there is a hall with original stained glass in the door skylight. The entrance hall leads to the rooms for land registers and documents. In the ground floor axis of the main entrance, there was a jury hall. The judicial section housed offices, conference halls, booths, and four flats. In the prison section, there were 107 cells on the first floor, an infirmary, a bath spa, hospital rooms, workshops, and a chapel with a vestry. The prisons has the layout of an isosceles triangle and three wings creating a radial pattern. The prison could house 150 prisoners: 90 men, 40 women, and 20 minors. The building was heated by a central heating boiler made by Škoda.

In the entrance hall and on the floors, there are original oak swing doors with brass fittings. In 1935, a bust of T.G. Masaryk was placed in the hall (now missing). The entrance hall leads to a two-armed staircase; staircases connect all the floors. Some of the furniture for the senior clerks of the Regional Court and bent chairs were supplied by the K. V. Skuherský’s company. Other furniture for office rooms was made by convicts from the prison in Ilava and transported to Hradec Králové in 12 carriages. In offices, there are original parquet blocks; in the corridors there are unoriginal tiles. The lighting fixtures were supplied by Jílek and Son from Hradec Králové. Some lights were lost; only a large chandelier from the large courtroom (formerly the jury room) has been preserved. Its equipment – the massive oak veneer furniture and leather chairs for judges and counsels – was designed by architect Rejchl. The room had high panelling of oak veneer in two tones arranged in a pattern (replaced for better acoustics). In the centre of the jury hall gallery, there was a clock box and a relief of the Czech lion designed by the architect.

Mayor Pilňáček said that Rejchl “designed the new building to meet the future requirements” and that “its monumental appearance corresponds to its purpose and meaning”. The authors of Přehled desetileté práce 1924–1934 (A Review of a Decade of Work 1924–1934) wrote that the building “is one of the largest and most beautiful buildings in the city”. With the complex, the architect centralized the judicial administration of the city in a single unit. The prison was designed in the spirit of the system that allowed prisoners to work. Prison buildings were built radially from the supervisory hall. Rejchl’s design of a closed block, therefore, did not substantially differ from this kind of architecture, but it humanized the prison conditions and hygiene requirements.

The Regional Court building still serves its purpose. The district court and prosecution that used to work there are now in separate buildings.

In 2001, a built passenger lift was built and the tiles and window sills in the corridors replaced. In 2003, the jury hall was reconstructed. 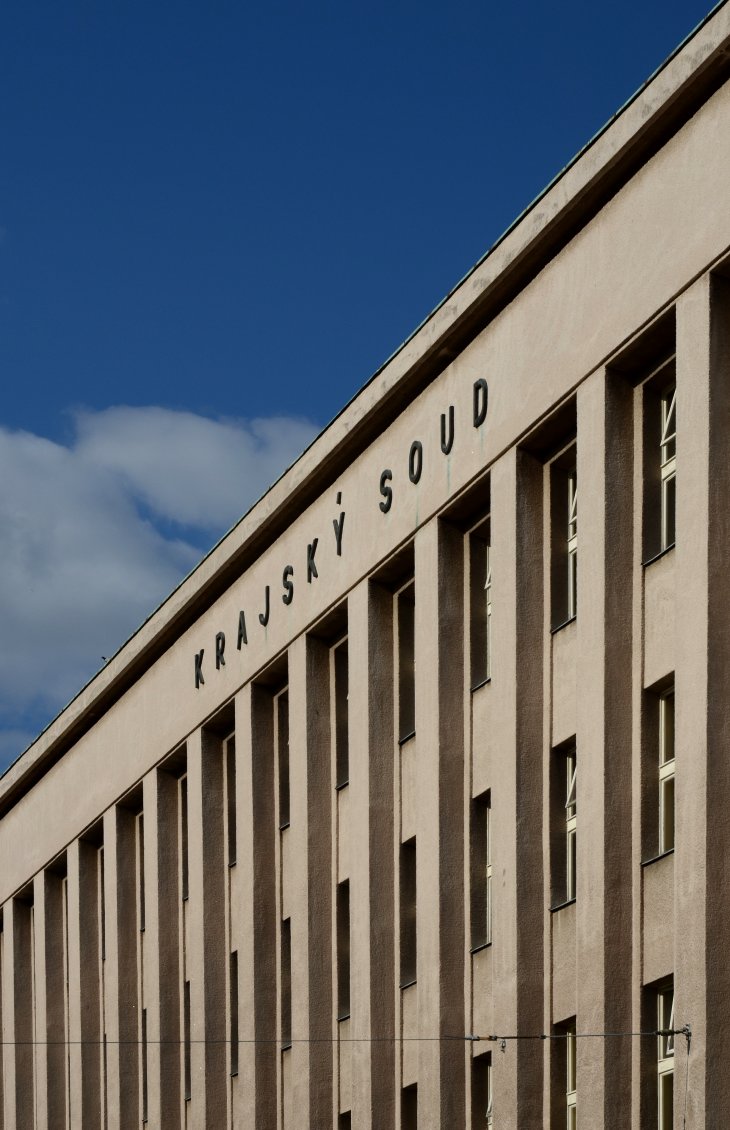 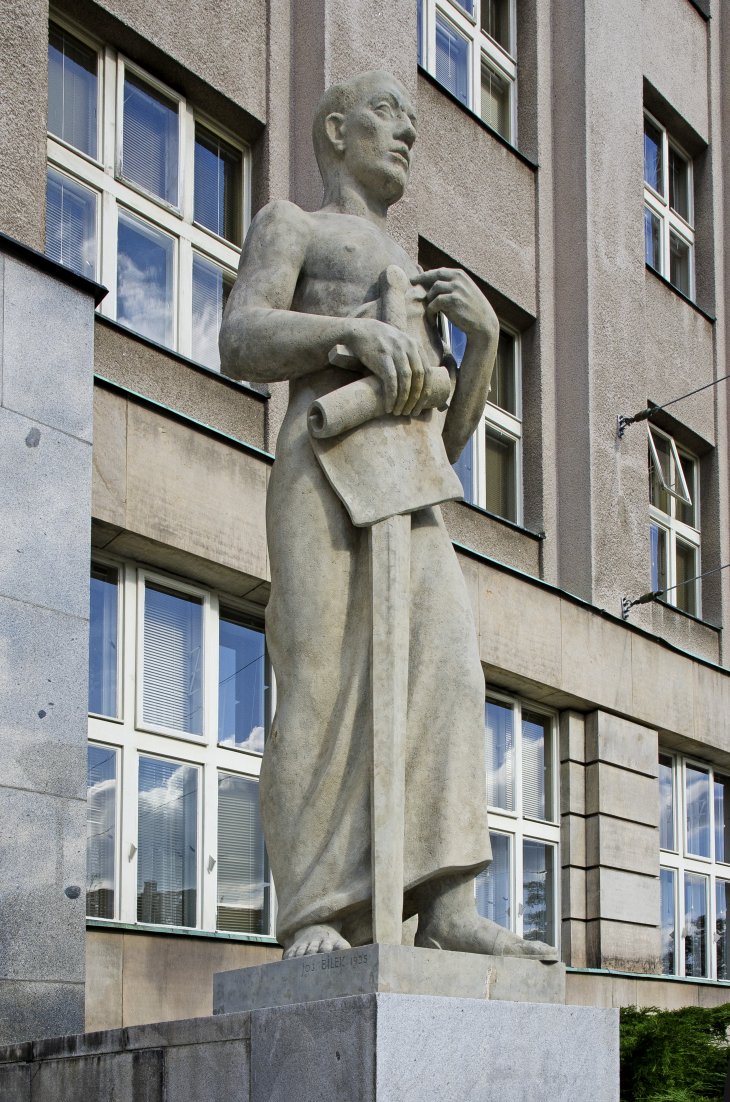 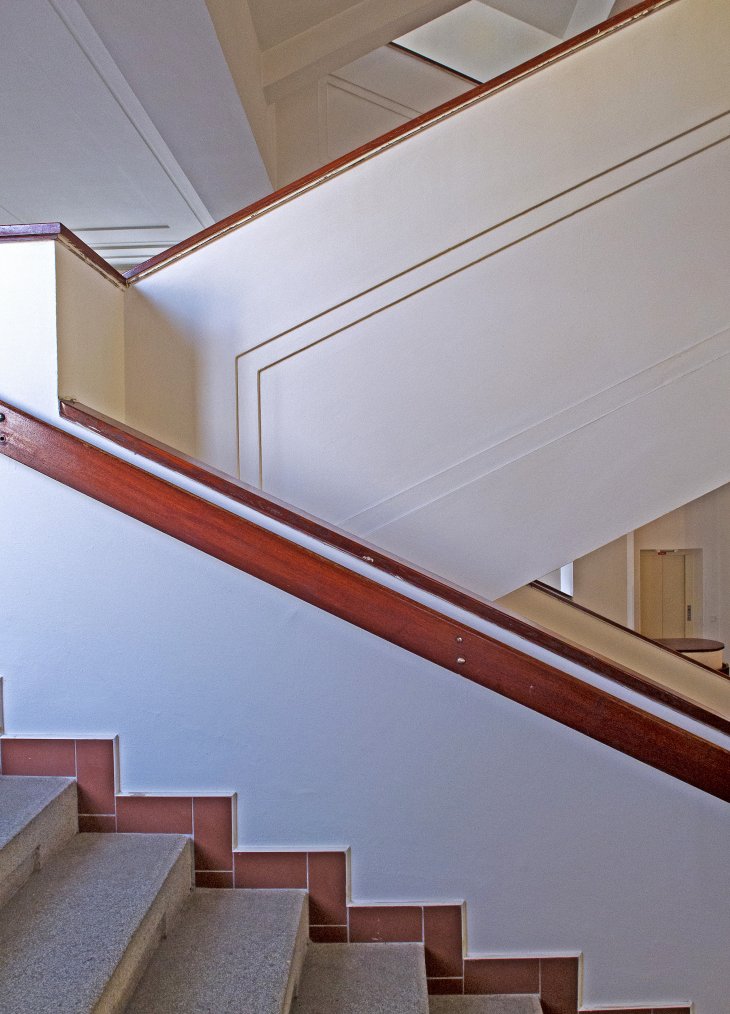 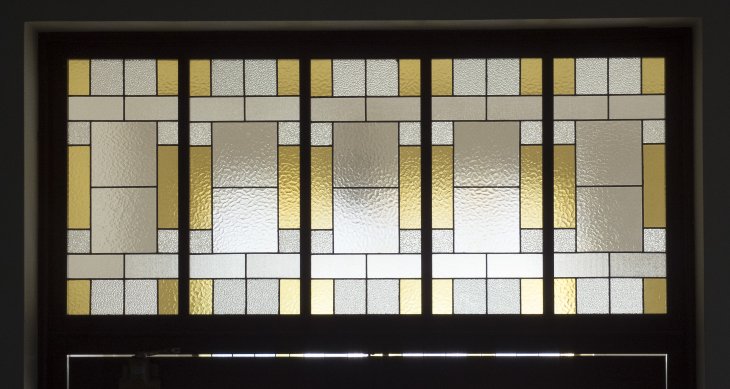 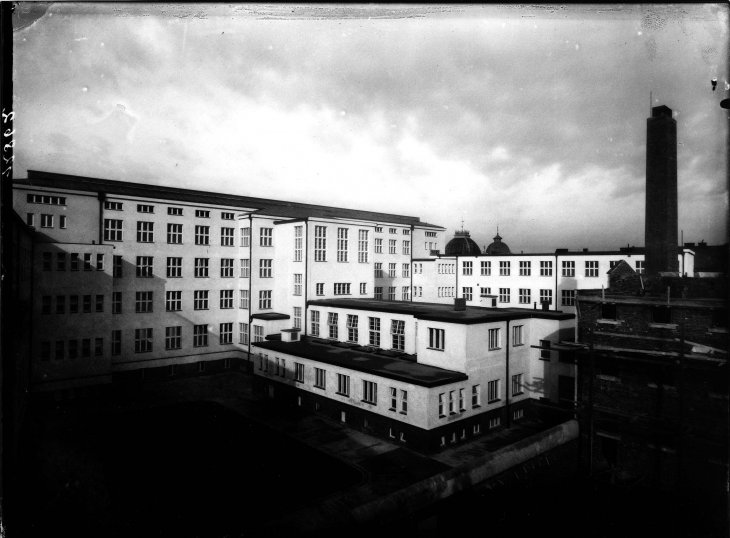 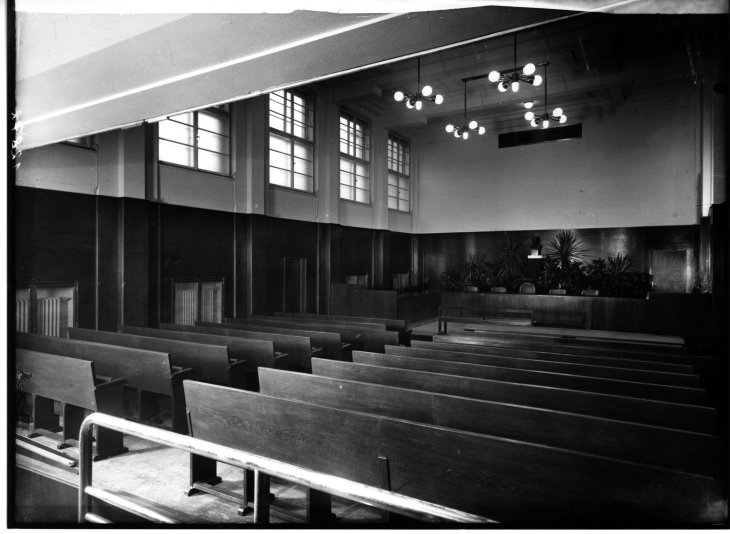 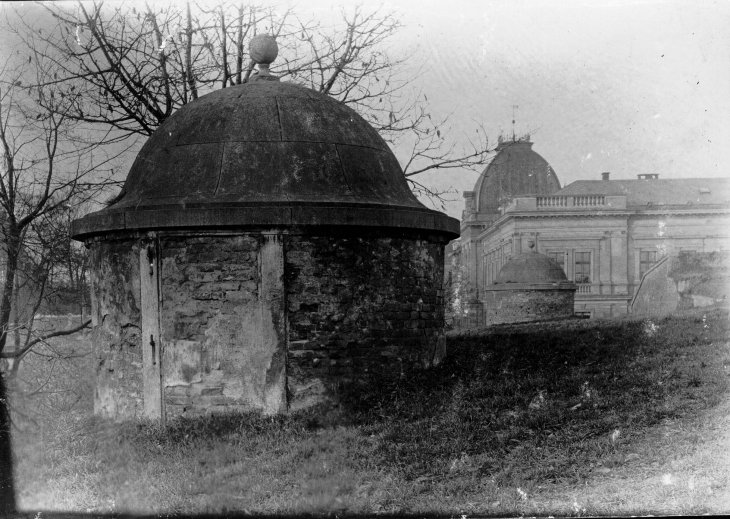