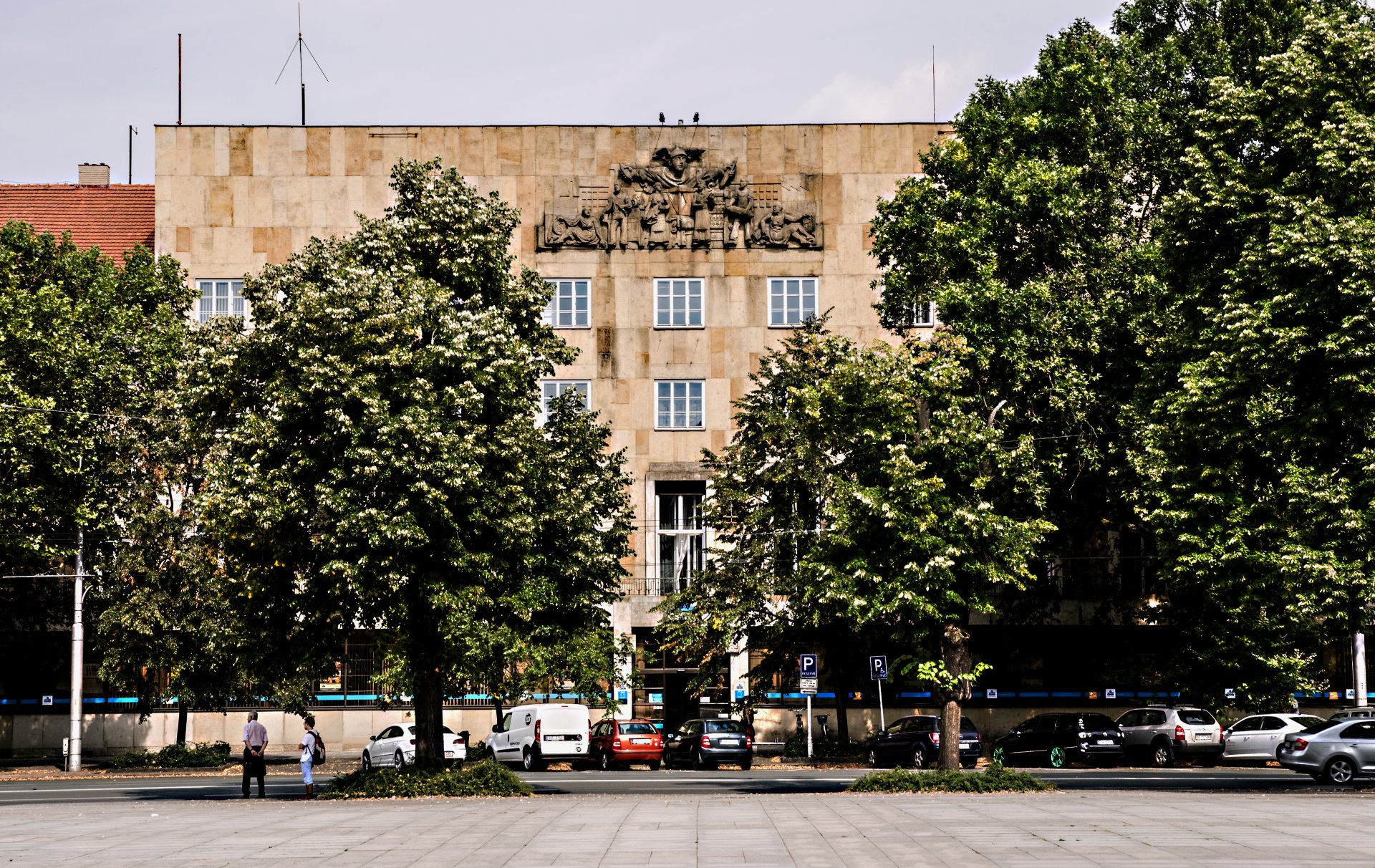 The representative palace designed by architect Otakar Novotný was built for textile industrialist Rudolf Steinský-Sehnoutka. In 1919, Rudolf Steinský (who used the surname Steinský-Sehnoutka in gratitude to his stepfather-uncle) took over the Setka mechanical weaving mill and cotton mill, founded in Černožice in 1893. He expanded the plant in 1925. He also owned weaving mills in Hradec Králové and Hořice. In 1926, Otakar Novotný designed a canteen and dormitory in Černožice for Steinský as well as the local municipal house. Probably in the same year, Novotný was asked to design Steinský’s palace in Hradec Králové. After Steinský married the daughter of Cyril Bartoň of Dobenín, a co-owner of one of the largest textile factories in Náchod, his business started to grow. In the 1930s, his company had over 20 company stores, including three in Prague. With the increasing sales, the complex of textile factories needed to set up its headquarters in a larger city. Rudolf Steinský-Sehnoutka, however, was not only the head of his textile empire. He was involved in professional, economic and financial institutions, too. He also became a member of the boards of several banks, including Živnobanka, Česká eskomptní banka (Czech Discount Bank), Pražská úvěrní banka (Prague Credit Bank) and Anglobanka. He even became a board member of the cotton exchange in Bremen. After he left the country in 1948, he founded a successful company producing draperies and blinds in Canada in 1950.

For his palace, Steinský-Sehnoutka chose a plot of land on the square designed by Josef Gočár as a business administration space. Gočár originally intended to design a civic house in the square, but he eventually modified the regulatory plan for Steinský’s palace designed by Novotný. The central part of the building has four floors with a flat roof and an attic; the side wings have three floors and a gable roof. The building is lined with slabs made of local sandstone; the massive attic is decorated with a relief. The shallow ground floor avant-corps lines almost the entire façade. On the first floor, we can see Novotný’s favourite motif of French windows with wooden blinds. The courtyard façade, built of decorative facing brickwork, is not plastered (like in Černožice). Otakar Novotný’s plans date back to June 1927. Most of the detailed drawings of the building and interiors are undated. The construction took place in 1928-1929.

Novotný’s buildings had elaborately decorated interiors. The most significant project was his design of the interior of the Czechoslovak Embassy in Budapest from 1923. Like in the Steinský’s palace, the decorations were designed by Novotný’s favourite artists, Karel Dvořák and Vratislav Hugo Brunner.

Originally, Steinský’s palace had several functions – there were the company headquarters on the lower floors, representative rooms upstairs, and 13 smaller flats and the industrialist’s opulent flat on the first floor. The high representative rooms had French windows. In the right side of the façade, there was supposed to be a guest room, a men’s room with a study (moved from the villa in Černožice), a festive residential two-storey hall, and a children’s room on the left. In the hall, there were 10 original four-spoke chandeliers on the tall ceiling. Facing the courtyard on the left, there was a children’s bathroom, the governess’s room, and the master bedroom with a dressing room and bathroom. On the right side of the courtyard, there was a dining hall and guest room. The right and left wings of the building housed offices and operational and technical rooms; the object also had cellars. The furniture in the neo-Biedermeier style was designed by Novotný.

The hall on the second floor divided the building into two parts with two different heights, shifted by half a floor. The entire storey had flooring with inlays and coffered ceilings. The partially preserved original equipment includes a fountain, marble walls and pillars, door panels, and heating covers. The drawing of the chandeliers, bars and fireplaces dates back to June 1928. In the representative rooms, there were figurative tapestries with a mythological theme. The hall led to the pillared dining hall. There was also a library and a reading room facing the courtyard. The balcony door in the dining hall has simple floral coloured glass panes. In the former ladies’ parlour, there are two figural heating covers with the figures of Adam and Eve. The original door, built-in wardrobes, marble fireplace, panelling and flooring with inlays in the salon are still preserved. The stained glass in two double windows was designed by V. H. Brunner. The four slender rectangular stained-glass windows in yellow and brown are decorated with animals in a landscape. The fireplace is covered with marble. On the upper floors, there were flats. In the attic, there were the so-called student rooms for business school students who were granted a kind of scholarship by the company.

The building façade is decorated with a relief in the spirit of social civilism designed by Karel Dvořák in 1928. The allegory of textile in the sandstone shows Mercury holding a shuttle and spindle in his hand, opening his arms above textile workers. The sculptor lined up the figures like on an ancient tympanum. The woman sitting on the left holds a plate with the date 1928 and the letter ‘S’ in her hands; the woman on the right side has a crest and a role of cloth. On the shallow background relief, we can see smoking Steinský’s factories and the palace in Hradec Králové. The sculpture and stone work was carried out by Václav Škoda.

For the visual effect of the palace, Otakar Novotný used minimum means of expression and the contrast of horizontal and vertical lines. He transferred this rhythmic element into the sandstone façade which increased the modern monumentality of the building. Its monumental character is emphasized by high pilasters, complete with a loggia, stone cladding and a façade relief. In the palace, the architect combined the historicism of the façade, expressing the owner’s confidence, and traditional processes in the unplastered brick courtyard façade. The building respects Gočár’s urban concept of the modern city. The modern neoclassical palace is a counterweight to the Directorate of the State Railways designed by Gočár and dominates the north side of the square. Although it was adapted to the square architecture, its overall pomp considerably differs from other buildings. The construction was well characterized by Jaromír Pečírka who said that “the architect and his buildings seem to have the same features: they seem civil, unobtrusive, neat, and a little cold...”

After World War II, the ground floor and first floor were used, for example, by a child health centre; the other floors were still used as flats. In 1974, the building was significantly adapted to serve as the secretariat of the district committee of the Czechoslovak Communist Party which resided there until 1989. In the early 1990s, the palace was reconstructed. A plaque was placed in the entrance hall in 1992. The palace is still owned by the Steinský family and rented for banking purposes. In 2011-2012, it was repaired and cleaned. 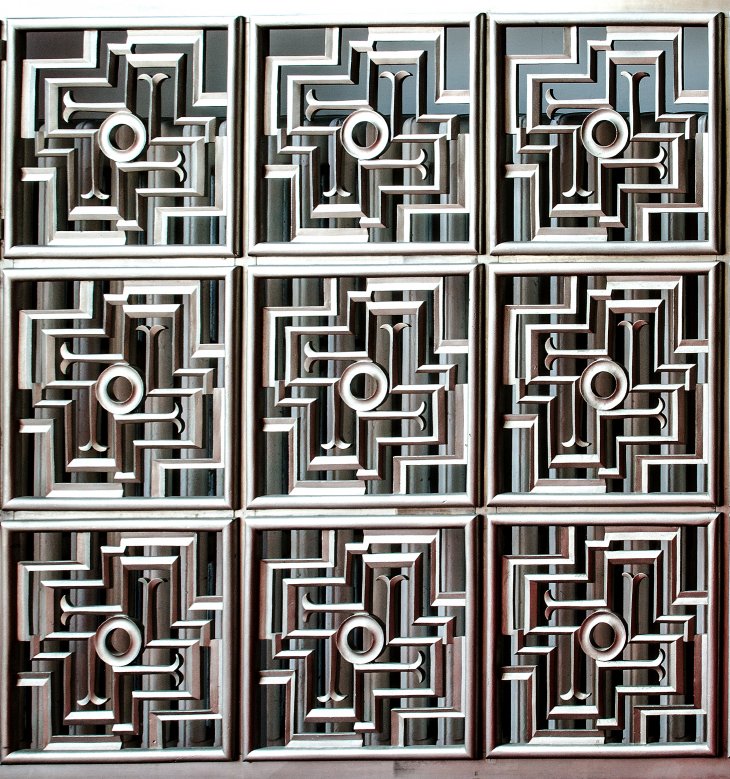 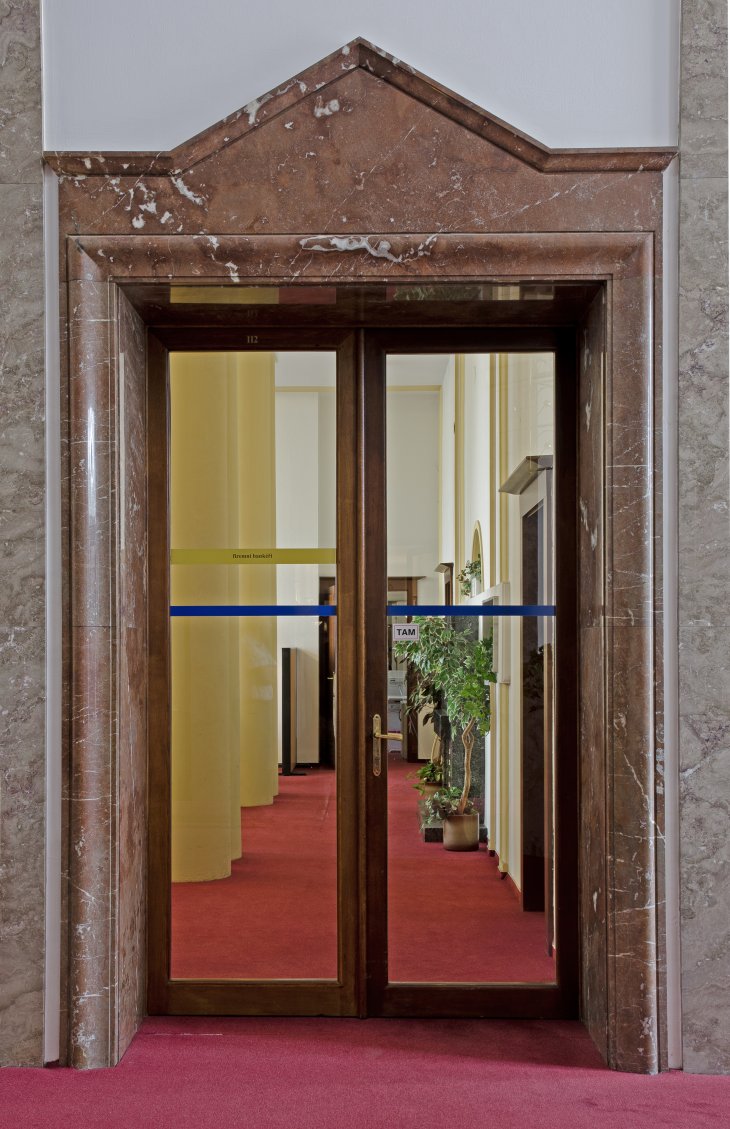 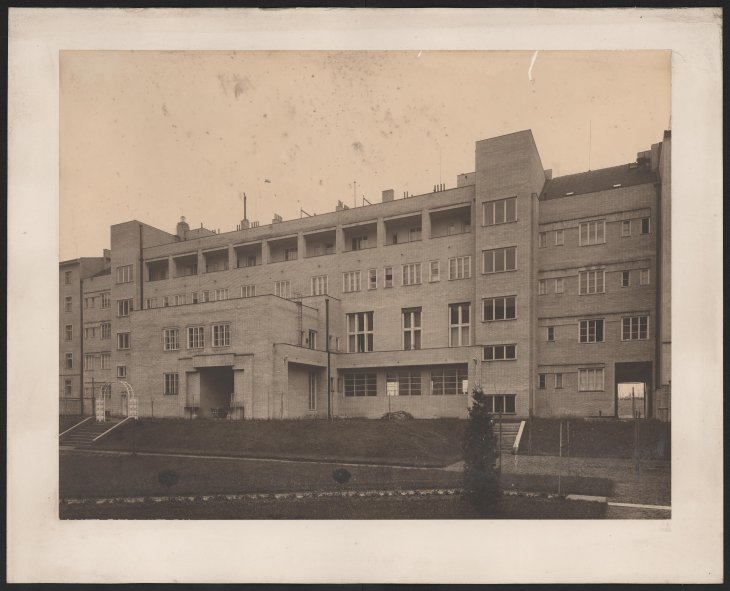 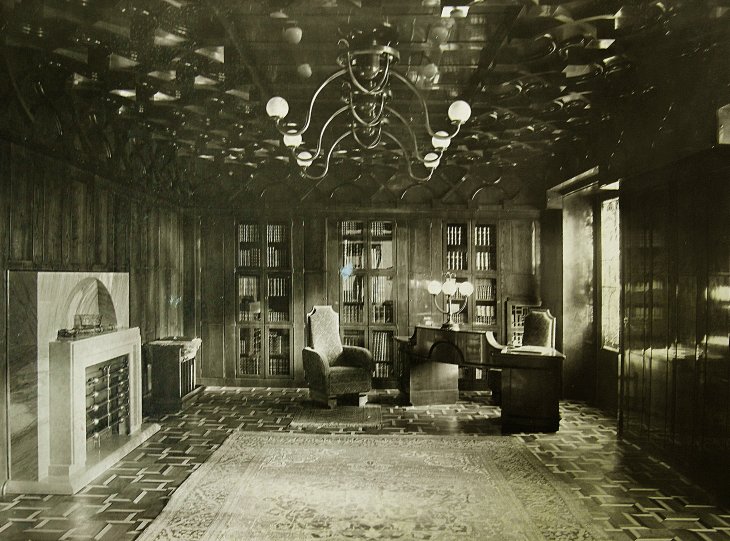 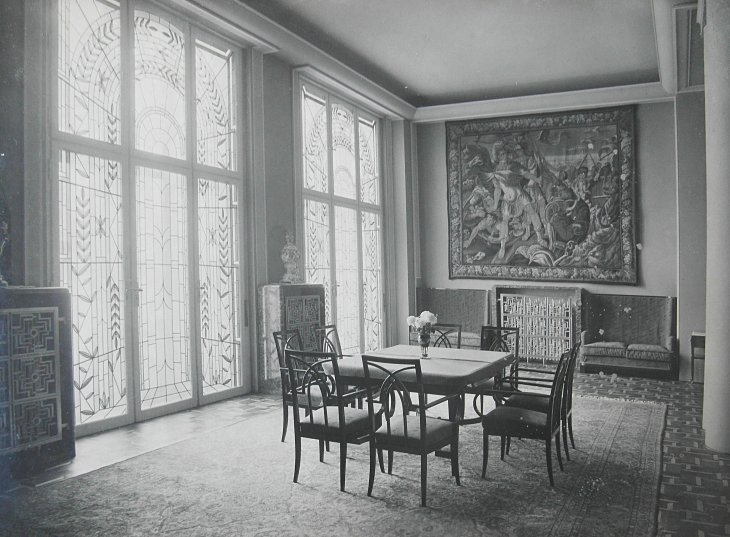 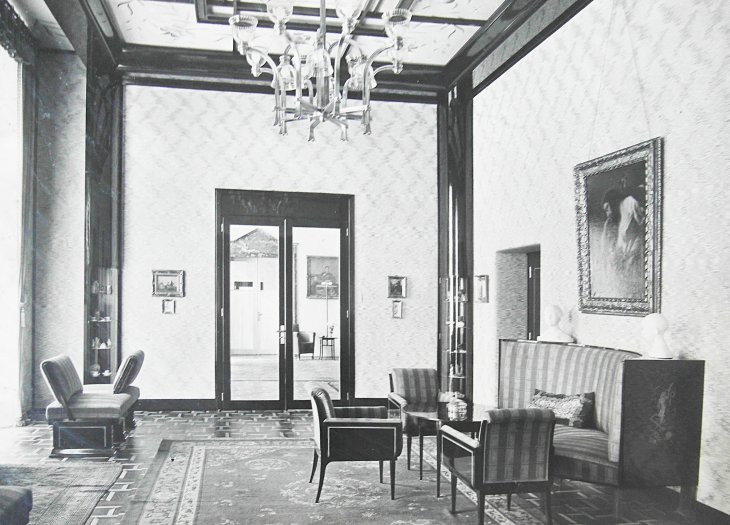 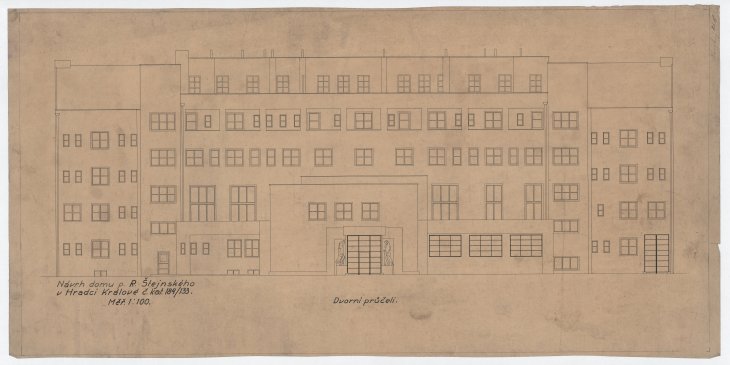 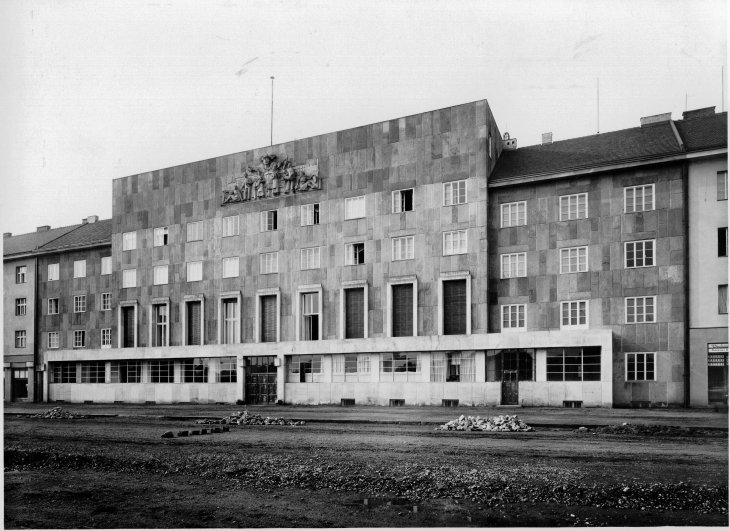 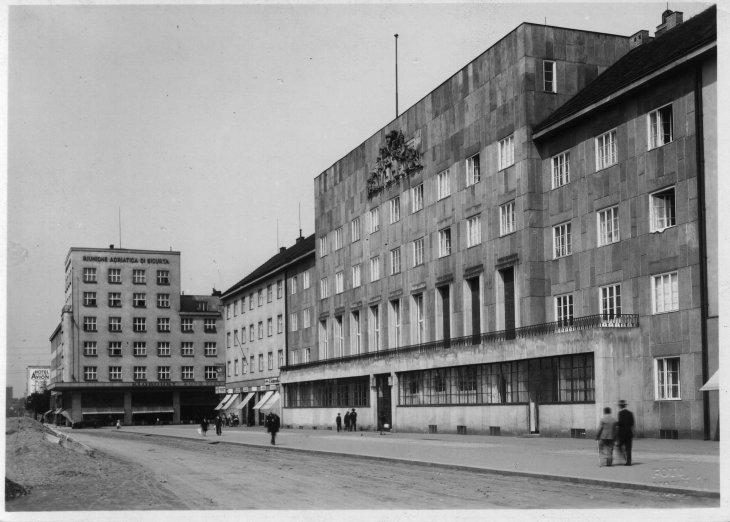