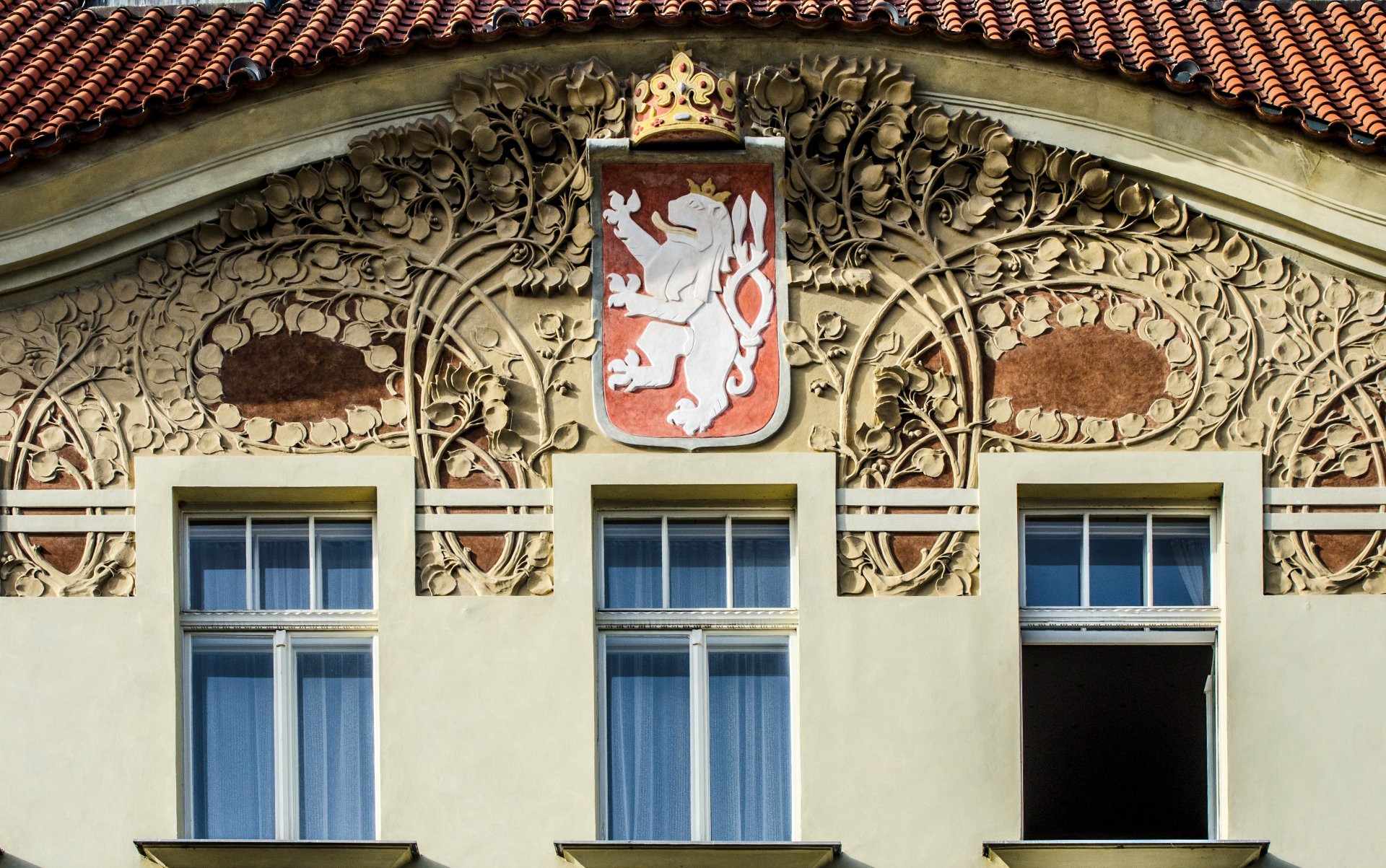 This excellent early design was Jan Kotěra’s first large project in which he tried to create a metropolitan style in the bourgeois environment of Hradec Králové. It was commissioned by his friend František Ulrich, the mayor of Hradec Králové, who was able to find good architects who were ahead of their time. Ulrich met Kotěra during his studies in Vienna in 1898, and they became friends in 1900.

Kotěra created the first designs in 1901; the house was built in 1903– 1904. The design of the hotel building (with the first large café and dining room in the city, which adjoined the neighbouring Grand Hotel) was more challenging than the design of the representative rooms for the District and Municipal Council. By this unusual combination of functions, Kotěra created a new type of a public building. The building and furnishing project was his first task of this kind. At that time, Kotěra started collaborating with prominent artists such as Stanislav Sucharda and Jan Preisler. The estate on which the representative building was going to be built was part of the former city walls, and the city purchased it after a long negotiation. The District Council had no permanent residence and its meetings took place in various places (e.g. in the neighbouring Grand Hotel). The city mayor tried hard to build an extension of the Grand Hotel, i.e. the District House, since 1900. In about 1901, he started negotiations with Jan Kotěra who designed the building in the early floral style. On 4 June 1903, the District Council approved the extension and the mayor’s suggestion to commission Jan Kotěra to design the building. Kotěra thought that architecture is inspired by nature, taking into account local needs and conditions: the core – the space, the peel – the ornament. “The purpose, structure, and place are therefore the driving force – the form is their consequence.” The asymmetrical façade demonstrates that naturalism has become part of the building structure and testifies to the architect’s interest in effectiveness and practical functionality of the building. Kotěra, however, was more interested in truthfulness, shown in the natural origin of his stylized ornaments, than in a constructive and spatial expression of purpose.

The construction began in late August 1903 and it was supposed to be finished in July 1904. The councillors moved to the building on 15 October 1904. The construction was carried out by architect Robert Schmidt and supervised by Jan Kotěra. The Municipal Council wanted the work to be performed predominantly by craftsmen from Hradec Králové. But Prague companies took part in the construction, too – František Křižík installed the power lines and Franta Anýž took care of some of the metalsmith work (fittings, grilles and covers on the heating elements).

On the undulating cornice on the façade, there is a fine stucco frieze decorated with linden leaves and the town crest and date inscription, “LP 1903” (“In the year of our Lord 1903”). On the first floor, there is a shallow convex oriel. The sculptural decoration of the façade was created by Stanislav Sucharda. The sculptor used Kotěra’s design to create the chimney shapes, stucco, and ornate architectural details. The themes of the sculptural ornaments (a crown, linden leaves, and lions) show the growing confidence of the developing city and emphasize its history.

The hotel entrance is lined with pilasters, and there is a balcony above them. The lower part of the building has a high sandstone plinth with oblique buttresses made of sandstone. The side buttresses extend above the main cornice where they end in the statues of lions. The distinctive decorative elements of the façade, inspired by Kotěra’s designs, include a wrought-iron courtyard entry lattice and a wrought-iron balcony railing on the second yard floor. The exterior décor of the District House reflected Kotěra’s partiality for folklorism.

The floor plan of the building matches the façade composition. The simple, almost square floor plan is enlivened by a protruding niche in the rear façade and a front avant-corps. The street façade is divided into two parts. The first, larger part is symmetrical and includes representational and office rooms; the second communication part is narrow and serves as an entry. Thus, the operational entrances to the Council were separated from the café entrance. Due to the tension, the house is both symmetric and asymmetric, the symmetry being based on balanced contrasts. On the ground floor, there was a café with the floor plan in the shape of the letter T with three high windows facing the street; opposite, the café space is extended with a long apse with a music stage. The restaurant had modern central heating. On the first floor, there was the District Council assembly hall, the meeting room of the committee and the district secretary, the mayor’s room, the cash office, etc. On the second floor, there were 12 guest rooms.

Kotěra also designed the furnishing for the café and restaurant interior on the first and second floor to match the building architecture. When he was absent, some details were developed by Otakar Novotný, mainly the elements outside the ground floor that Kotěra cared about. Kotěra designed the first modern social building in Czechoslovakia and a hotel that had no parallel even in Prague. The credit should be also given to František Ulrich who had a sense of compactness, modern architecture and artistic decoration and pushed the project through in the District Council. The preserved interior equipment includes restaurant and office furniture, two stained glass windows with parrots (from 1922), five windows with storks/herons (designed by Jan Kotěra in 1904), a painting by Jan Preisler (the original, exhibited in the Gallery of Modern Art in Hradec Králové, was replaced with a copy), wood panelling and doors, built-in cabinets and a rack, restaurant chandeliers, console lamps, eight ceramic vases, radiator covers and heat ventilation, and a staircase railing. The first floor interior is similar to the assembly hall in the town hall in Jindřichův Hradec, also designed by Kotěra. The decorative ceiling and wall paintings have been preserved, too. Most of the equipment remained in the building; some furnishings are stored in the collections of the Museum of Eastern Bohemia. The furniture designs are stored in the collections of the National Technical Museum. The representative and administrative rooms were decorated by František Fröhlich through the intercession of František Ulrich. In the assembly hall, there was the town crest and the national emblem, lined with strips and a horizontal wavy line. The ornamental templates from the District House were also used in the architect’s own flat in Jeseniova Street in Prague.

The architecture of the District House exceeds the contemporary standard and marked “...the beginning of the rise of the city building culture and established its traditions.” On the front façade, we can see the signs of Kotěra’s secession and his effort to create specifically Czech architecture. The façade reflected the building interior: “... on the ground floor, it was open to the bustling life of the inn room and the courtyard; on the floors, it was closed and silent.” Local newspapers paid much attention to the new building. Thanks to the new District House, Hradec Králové surpassed Prague – it was the first city to have “... a beautiful representative building two large camps in Prague had been arguing about for two years.” The insufficient spaces for district officials brought the need “... to build both a new respectable shelter for the council and a cosy and stylish centre for the local community and visitors from other towns... a shelter that has no parallel in any other district council in Austria.” The construction was successfully completed “... regardless of the costs, and for the architect, Mr. Kotěra, the building will be a new milestone of his successfully started artistic career in the Czech countryside.” After the opening of the District House, Kotěra came to Hradec Králové to show his work to his art critic and friend, K. B. Mádl. As for the District House, Mádl liked its “... moderation and simplicity, handled with a flair for architecture and artistic taste and built with an artistic expression, which add a pleasant character to the building.” As for the interior equipment, the critic wrote: “The advantages of this house include the interior unity of the décor, walls and furniture matched by the coloured windows, the balanced use of colours, the modest and nice ornamental décor, and the interplay of lines and colour that tactfully and positively express its representative and practical character.” Art critic Karel Herain said that the District House is “a Czech hotel of a genuine European orientation.”

In 1921, builder Josef Fňouk designed the extension of the passage to the yard, and had the front door to the dining room walled up and a new entrance built. In 1928, extensive internal modifications were carried out according to his project. The first floor, particularly the council hall, was newly equipped with historicizing furniture and accessories. The sculpturally decorated loggia on the second floor was glazed probably in the same year. On the hall ceiling, festoon stucco was created in a profile frame. The windows facing the yard were decorated with stained glass in the spirit of civilism (the medallions included a picture of a skier, men on a raft, the town crests of Hradec Králové and Pardubice, and an automobile); the stained glass on the staircase was added probably in 1928 – all of them were designed by an unknown author. The carved staircase railing and historicizing mirrors might be from the same year. The panes in the rooms facing the street were taken down to meet the needs of Autosalon, the car showroom residing in the building. The outside wall was partially demolished and an arch avant-corps was built above the walls of the lower floors; the central wing walls were knocked down and the car showroom connected with the lounges in the street wing. The partitions, doors and window openings into the yard were also changed. These modifications were followed by extensive changes in the basement and on the yard ground floor. More modifications to the basement were made in 1956. Since the mid-20th century, the house was the seat of Restaurace a jídelny Hradec Králové (Restaurants and Canteens of Hradec Králové), while the local Autoklub (Car Club) had its seat on the first floor.

In 2005–2006, the reconstruction of the building started after long-term deterioration. In 2004–2007, a restoration survey of the interior painting, façades, stucco decoration and joinery elements was carried out and a copy of Jan Preisler’s painting created. Since 2006, the building has served as a hotel again, and there is a refreshment shop on the ground floor.

The District Council of the City of Hradec Králové. 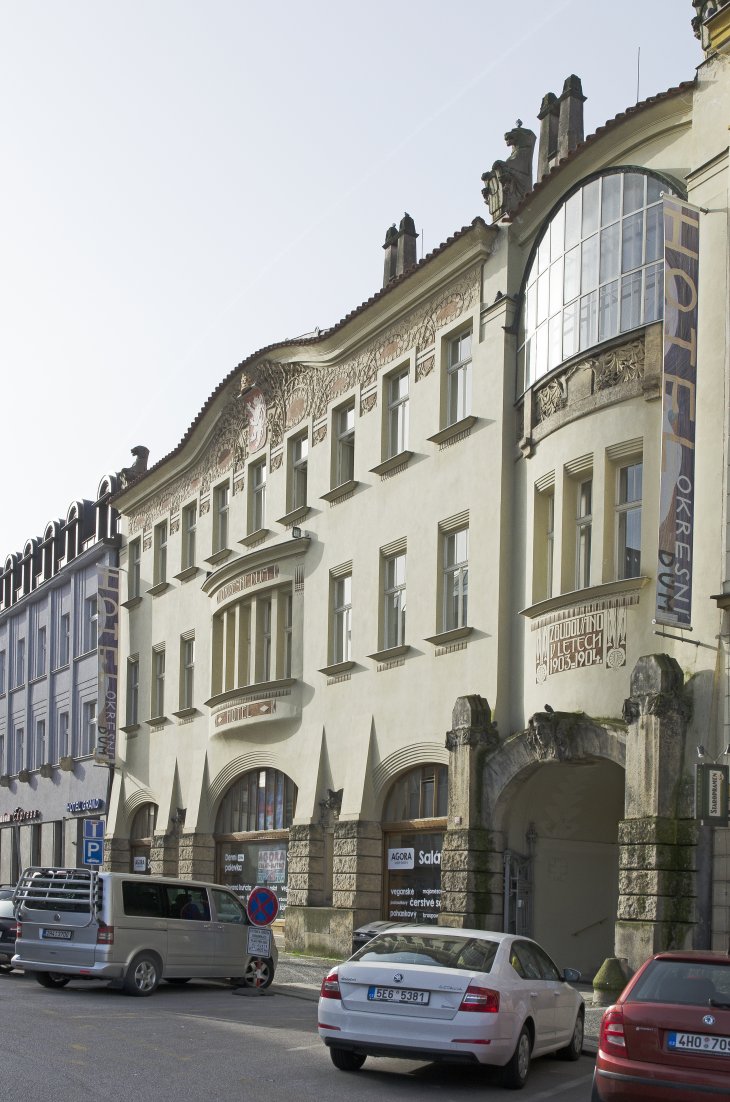 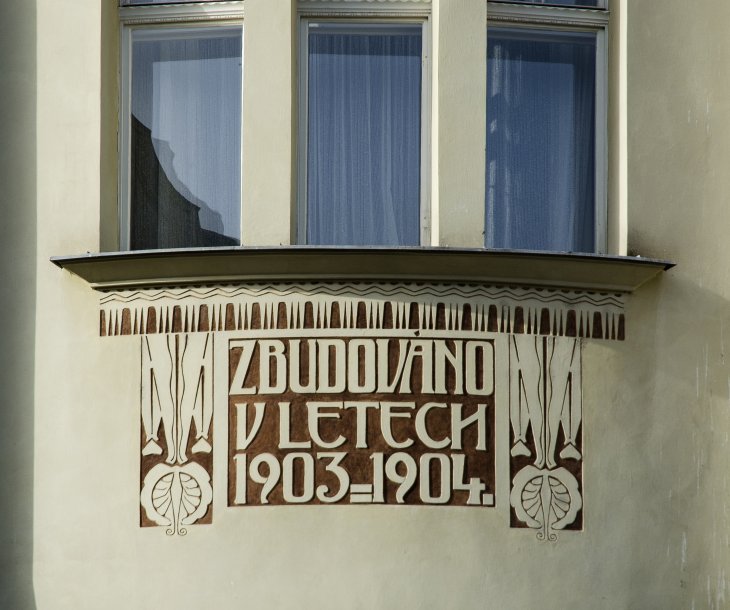 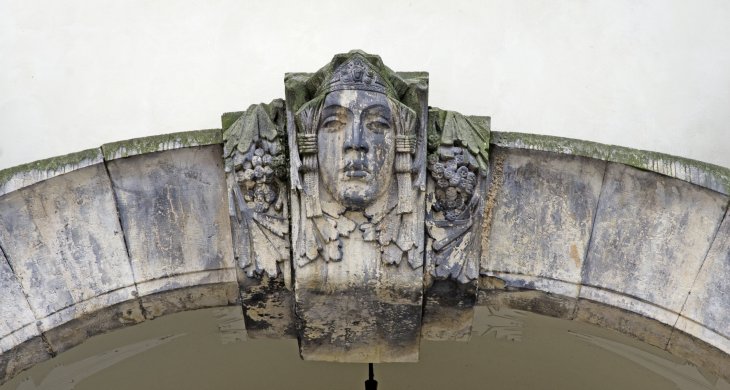 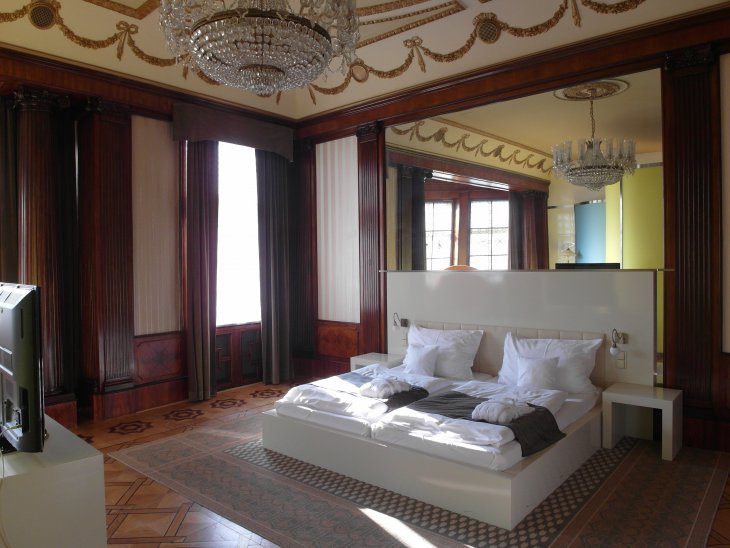 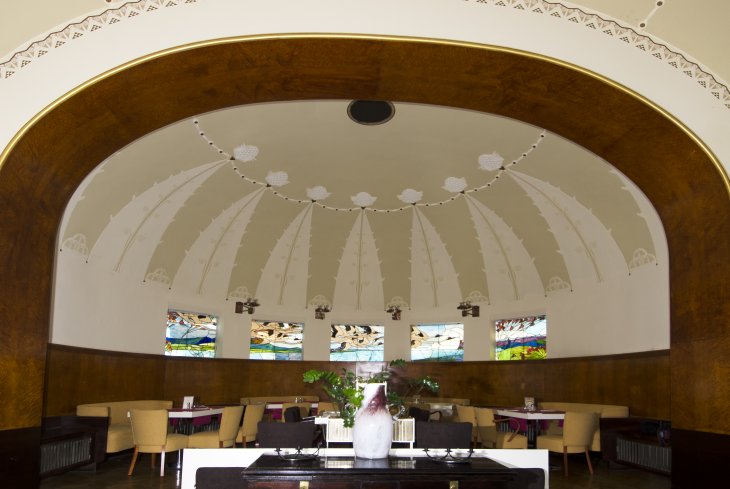 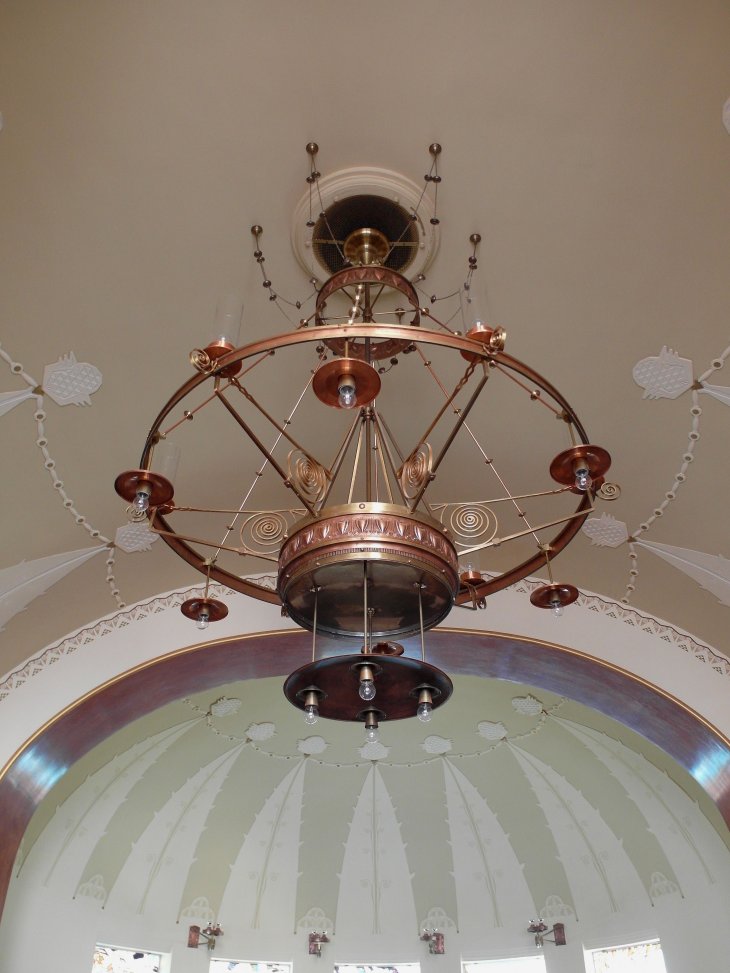 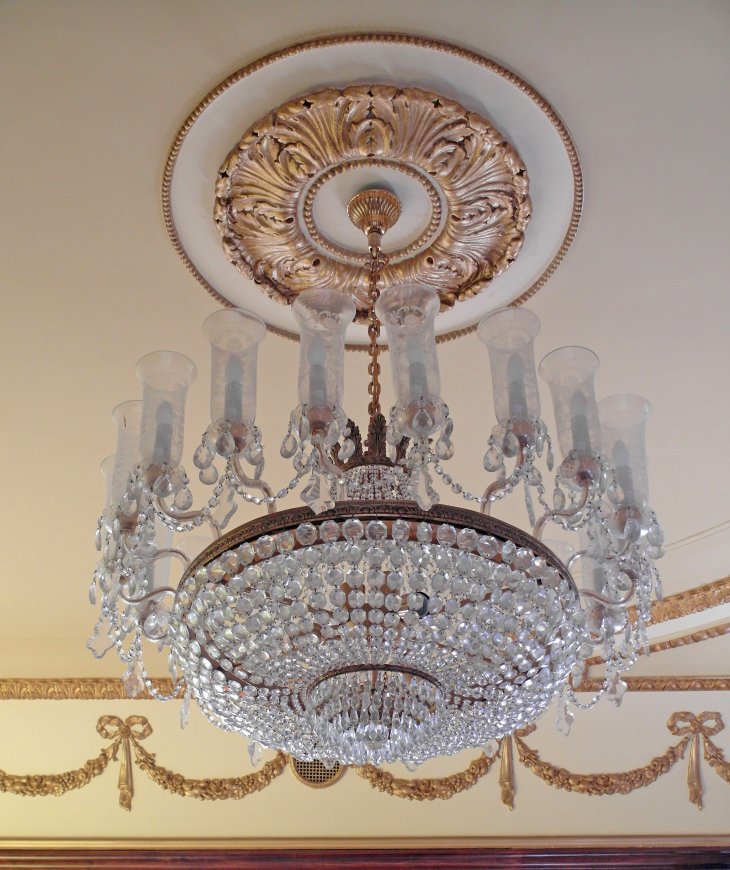 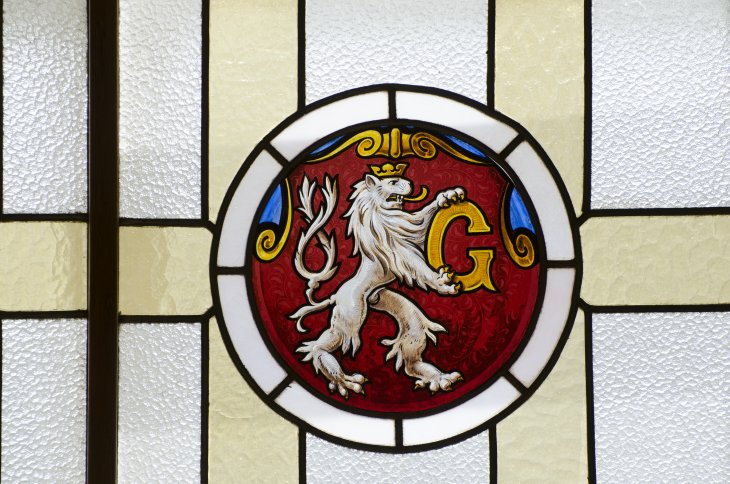 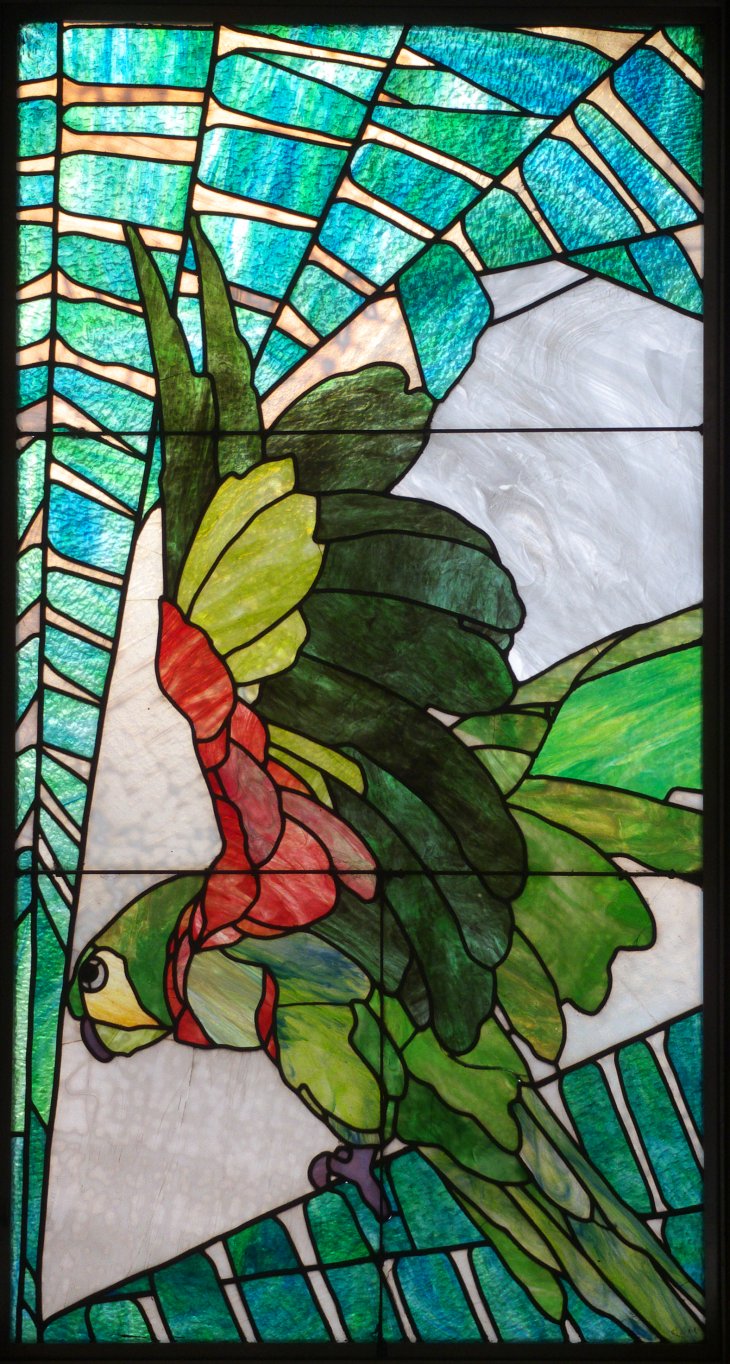 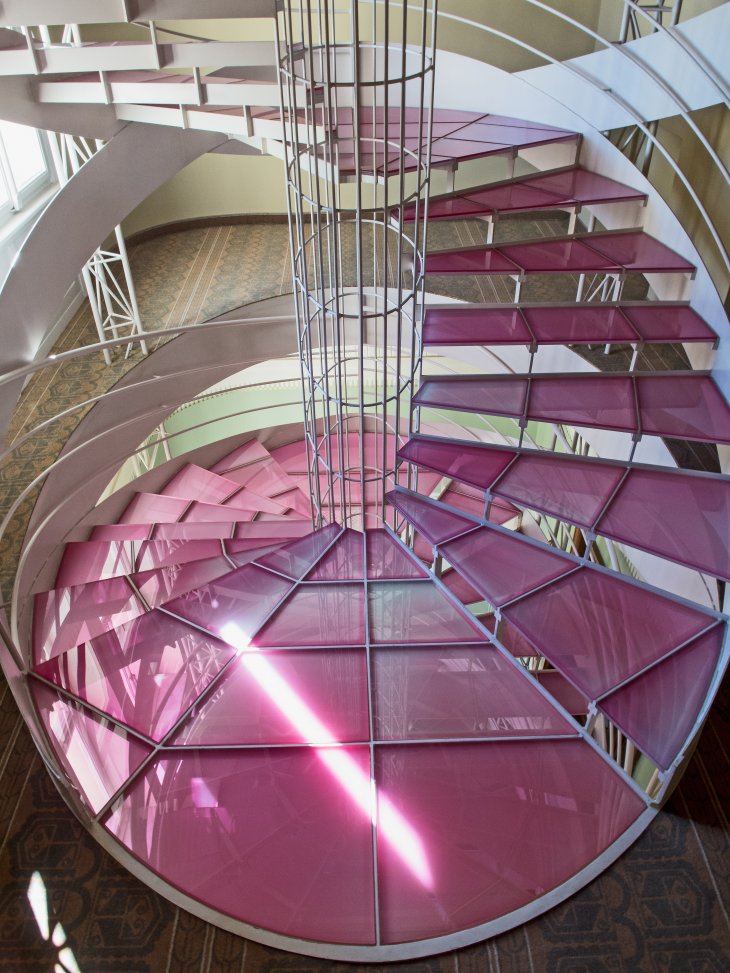 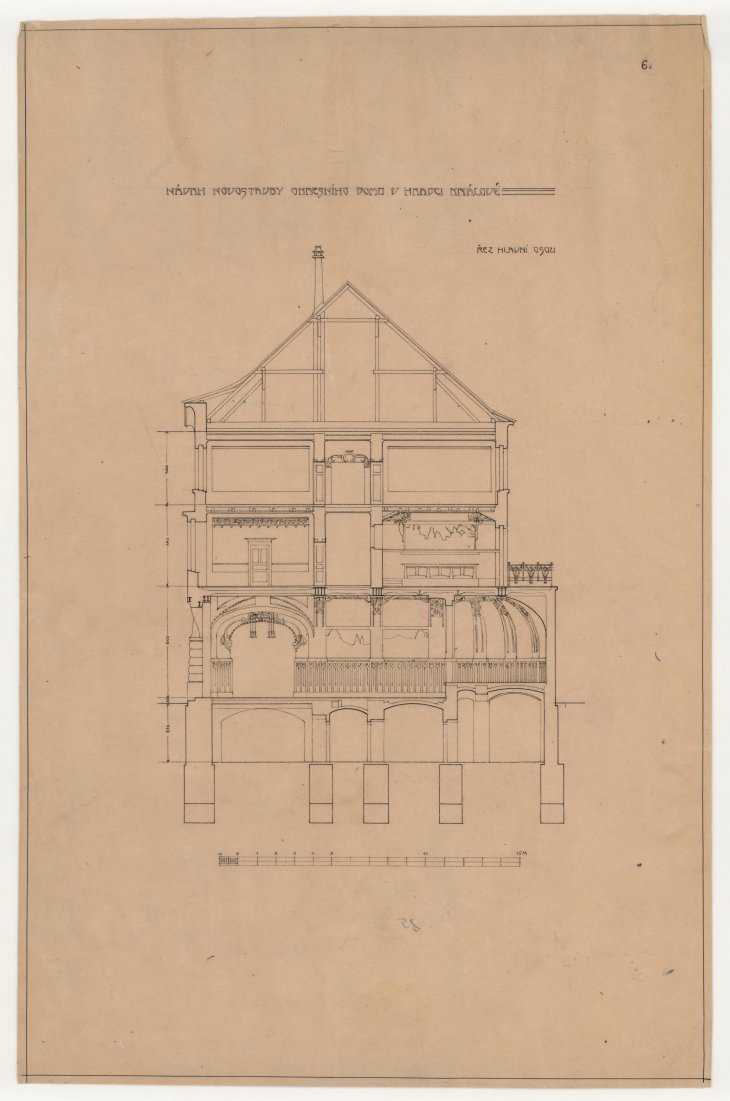 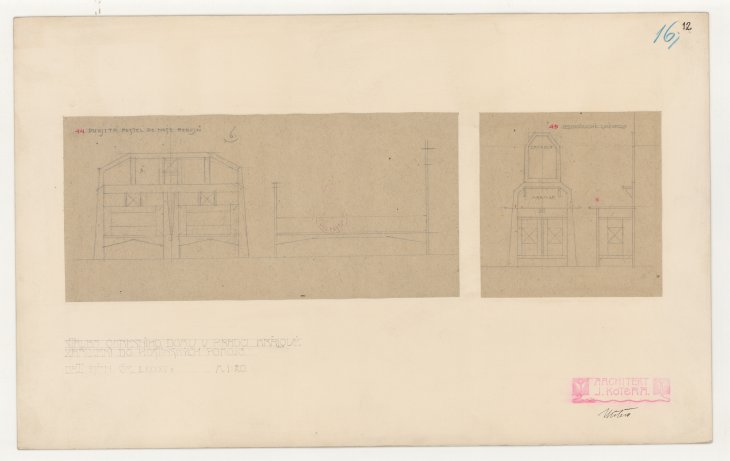 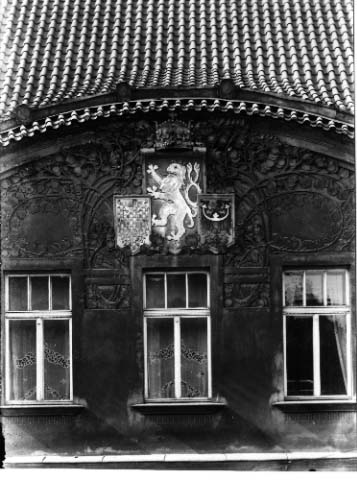 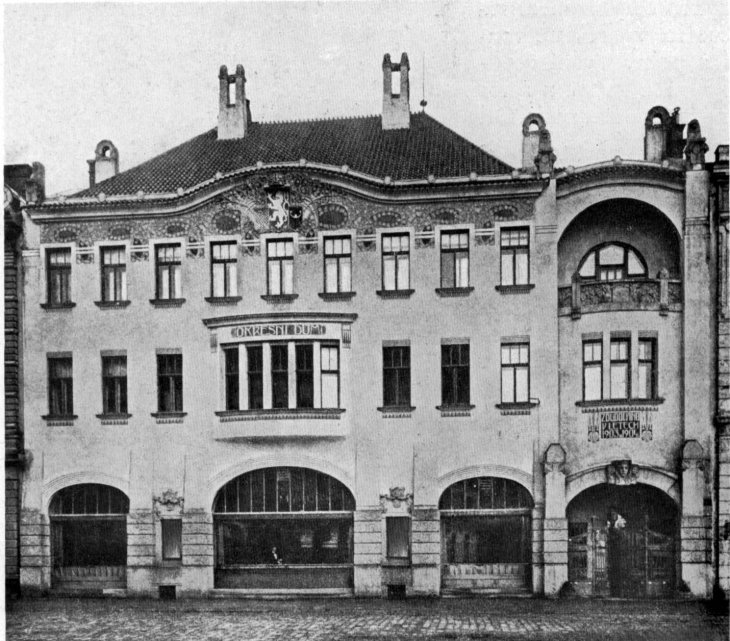 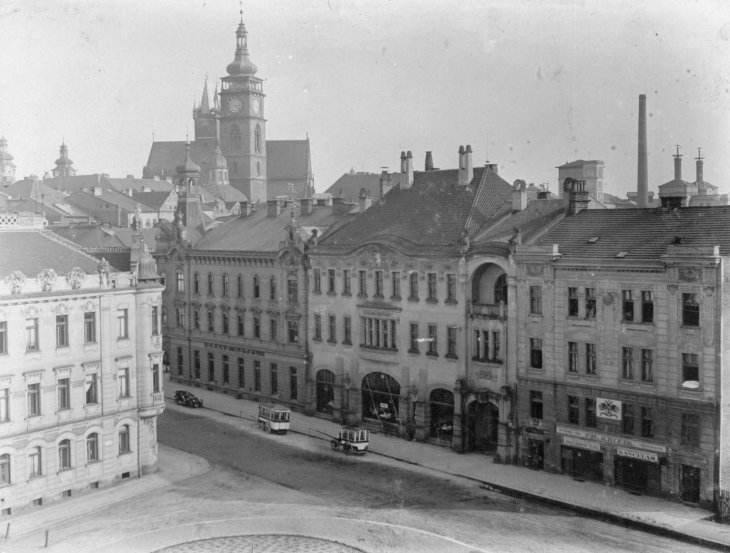 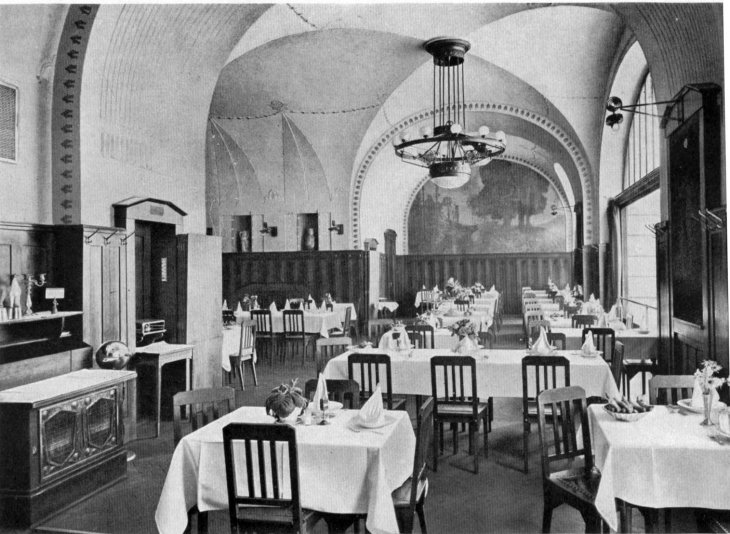