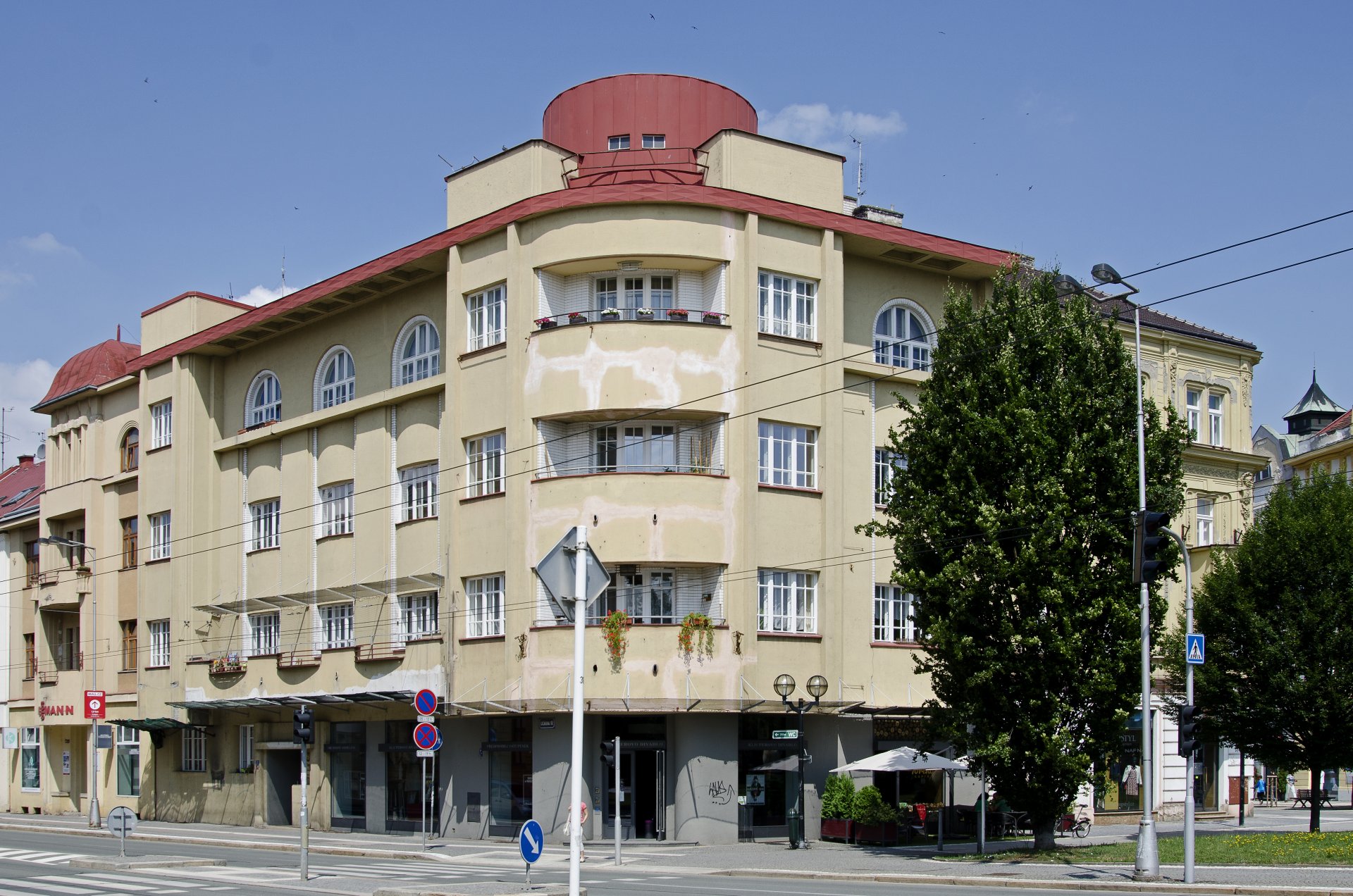 “...the concept of the house, with its emphasised cylindrical corner element, was ahead of development for more than ten years,” wrote the architecture historian Marie Benešová. In professional literature, this object is often mentioned in connection with its progressive, proto-functionalist mass layout with a sober, geometrically scaled-down form that was ahead of its time. With its smooth surfaces without ornamentation, the project was a progressive architectural masterpiece although Bohumil Waigant designed it at the very beginning of his career.

In 1910, a regulatory plan for the blocks around today’s Gočár Avenue and Čelakovského Street, where houses were already being built, was elaborated. In the summer of that year, the corner lot was purchased by Mr and Mrs Juliš to build a five-storey residential building with nine flats and commercial premises. The earlier unsigned design, drawn up for the building permit, is significantly different from the actual building. The total height of the building exceeded the agreed limit by 40cm, the number of shops on the ground floor increased, and the rich façade decoration in the spirit of geometric modernity was not created. The window sills in the original design were decorated with spiral ornaments and the windows, which were supposed to form narrow, elegant arcades going vertically through all the floors, were actually replaced with a relatively massive cornice separating the second and the third floors. On the first floor above the corner portal, there were supposed to be reliefs of two pairs of caryatids with rich floral ornamentation (the favourite theme of Antonín Waigant, the architect's brother) in the spirit of geometric Art Nouveau, which would certainly give more freedom to the Prague sculptor. The sculptural decoration of this extent, however, was not executed, although the basic mass of the building remained unchanged. The question is why such a significant change occurred and when the façade (except for a minor relief at the entrance) lost the decoration, so that the original plan was not executed. It might be that the investor or the architect changed their mind or the change might be recommended by Jan Kotěra, a more experienced architect. Kotěra not only taught his students and led them to independence, but he also supported their work. Shortly after the construction of the museum in Hradec Králové based on his design was launched, he even recommended the then 25-year-old Waigant to Josef Juliš. However, we cannot exclude the possibility that the merchant met the young artist through his brother Antonín who was working on the stucco decoration of the museum and on private projects at that time.

The dominant accent of the whole object, created in the form of smooth verticals with a purist façade and minimal expressive means, is the rounded corner with a tower tambour with ribbing in the contemporary style of geometric modernity. As for the space concept, Waigant had to adapt the design to the asymmetric trapezoid shape of the lot, which enabled him to develop both the house corner and its wings. The portal has specific massive graded jambs and extended door heads with a stone relief with a putto holding a cornucopia on the right and the signature Inv. A. Waigant at the bottom right. The first axis leads from the first floor up to the roof in the form of oriel. The second, third and fourth axes, culminating in Waigant’s favourite arched windows, are slightly recessed with continual white ceramic tiling around the window opening jambs. The massive, heavy impression of the building is compensated by the use of vertical elements that are most obvious on the corner oriel in the form of pendant posts and in the window axes lines.

In the residential part of the building, there is a hall lined with white tiles right behind the entrance door, leading to a wooden double door with ground glass panes. The well-preserved brass railing has decorative spiral panels, and on some windows, there are still brass knobs in the shape of olives.

In February 1934, the commercial premises were bought by the Slavia Insurance Bank from the Moravian-Slovak Bank, which had a seat there for ten years. The Czech company name “Slavia, pojišťovací banka” was affixed to the roof. Probably in the 1950s, the sign was replaced with a five-pointed red star, located in the centre of the tambour top, which remained there until 1990. In the early 1980s, the ground floor was reconstructed for the purposes of a store and exhibition hall of the Fotochema national company. In the last decade, the commercial premises were renovated again, and since 2015, they have been used by the business and sales department of the Klicpera Theatre.

The cracks in the balconies have recently been provisionally repaired with stucco, regardless of the overall impression; the street façade is in serious disrepair. The building has retained its original form and function, but it is still waiting for its rebirth. 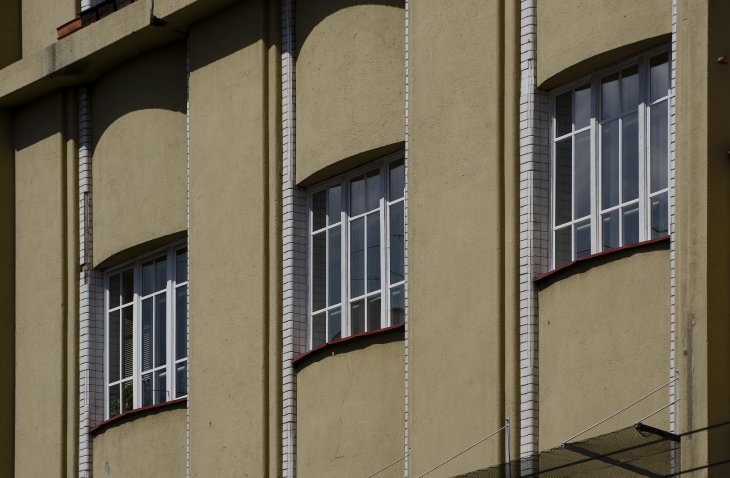 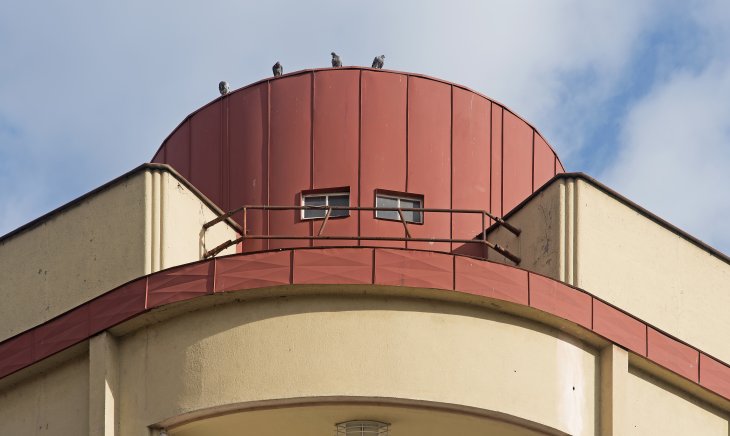 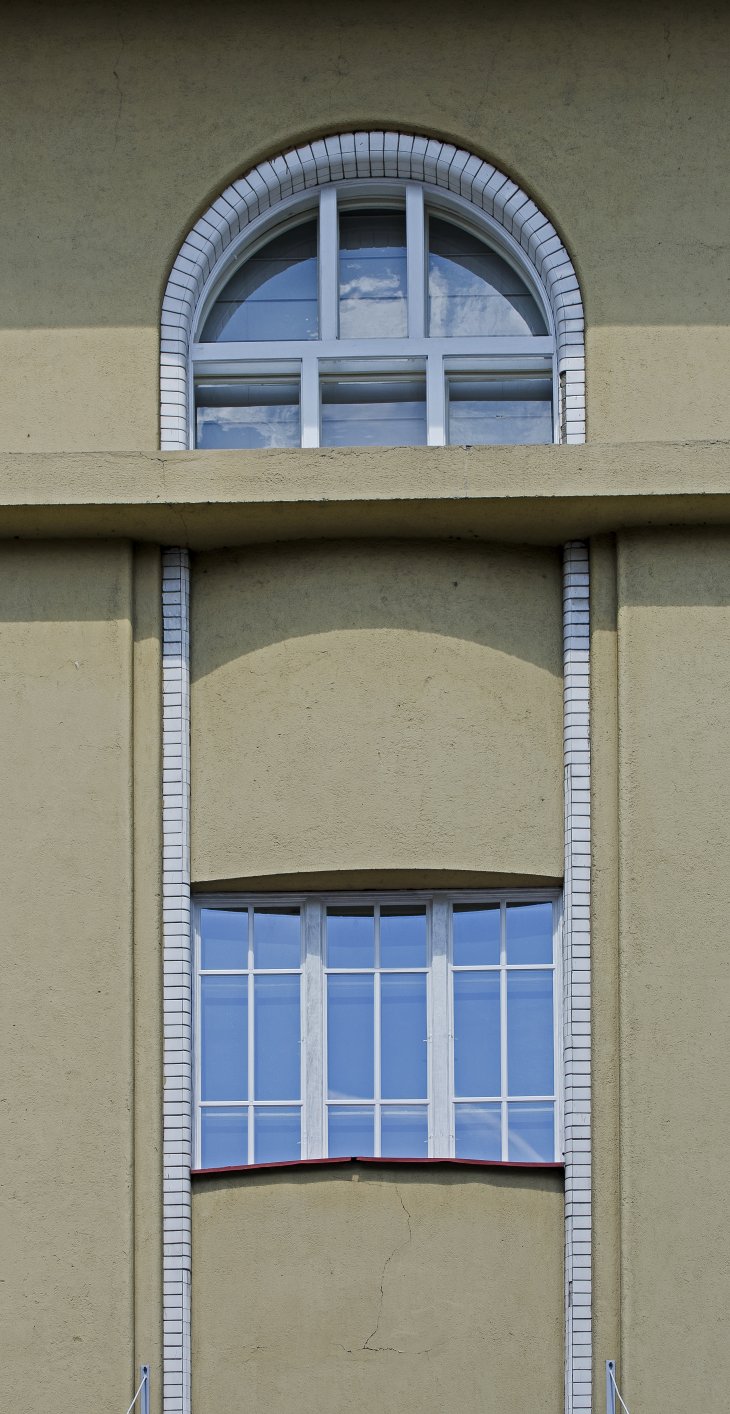 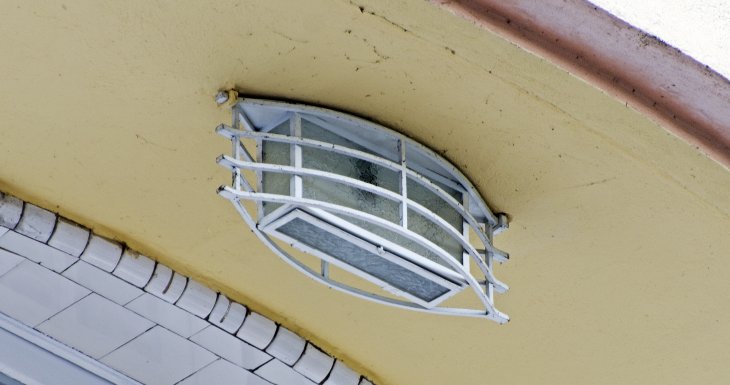 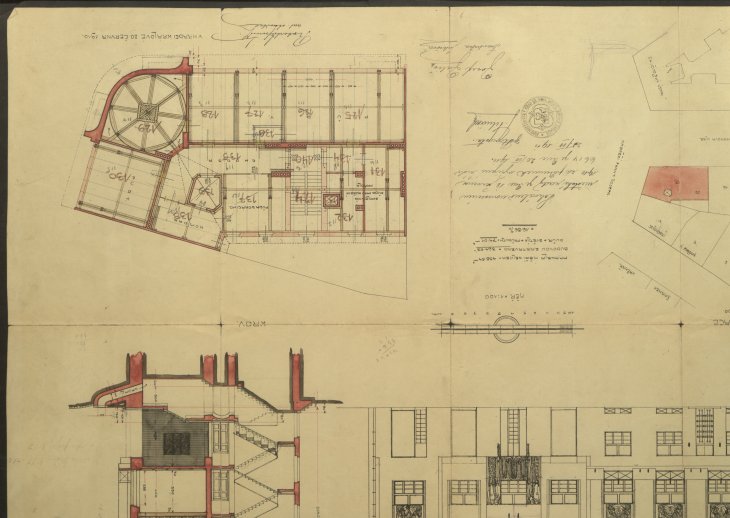 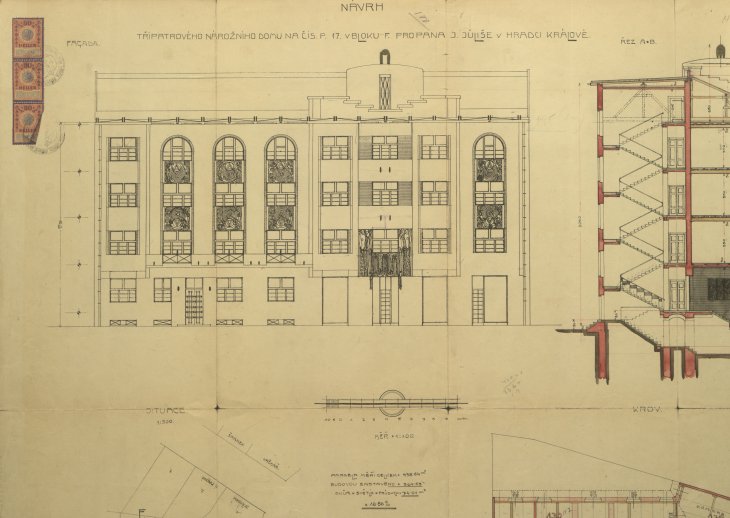 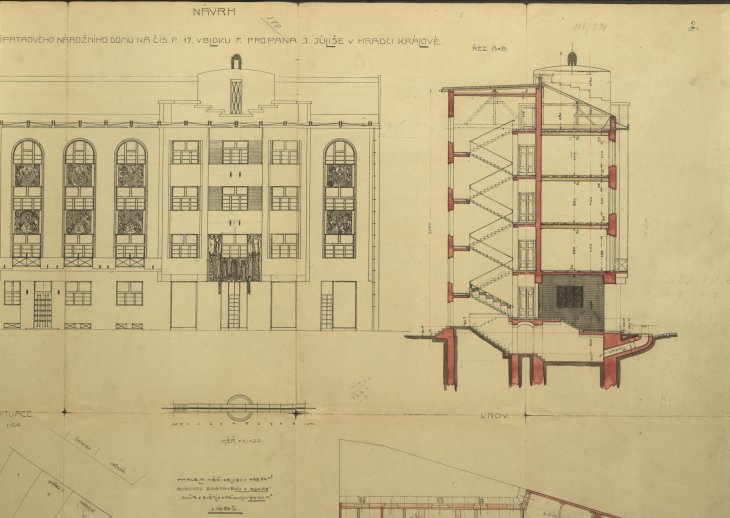