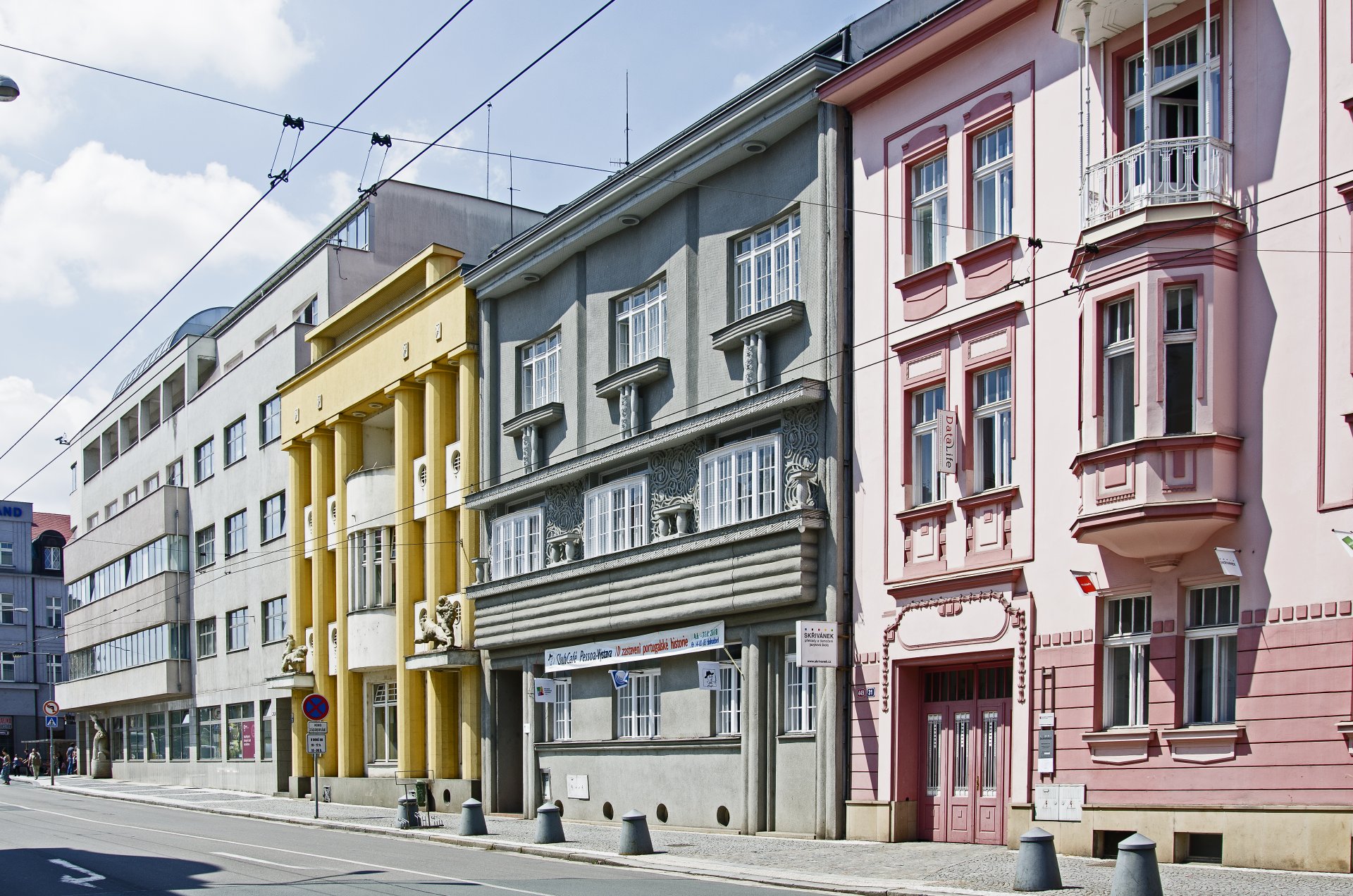 In the immediate vicinity of the public transport stops in ČSA Avenue, there is a strikingly elegant three-storey house with unusual plastic ornaments on its façade. Its probable architect, Bohumil Waigant, designed the house in a romanticizing and classicising style – with columns – that is an example of the architectural trends in the first decade of the 20th century. The house is one of the classicist projects Waigant started to work on after his change of style in 1911.

In comparison to his production in previous years, Waigant used significantly richer decorations and he based his design on the interplay of convex and concave architectural materials. The author of the façade masterfully combined the elements of geometric modernism, which is evident also in the classicist interior. The house plan, signed by the owner, builder Josef Jihlavec who certainly had a great influence on the façade appearance, reveals that the construction started in March 1913. The final form of the front façade décor is significantly different from the found drawing which includes two symmetrical interfenestral reliefs with a motif of robust figures surrounded by vegetative décor on the ground floor. Looking at the character of the sculptural decoration in the drawing, we can conclude that it might have been created by the architect’s brother, sculptor Antonín Waigant, who was also the author of the sculptural decoration on many Prague houses.

The building is conceived horizontally, using parallel plastic elements and a relief frieze between the ground floor and the first floor. The segmented arched shape of the four-piece windows is decorated with spiral ornaments in glass panels and low balusters. Above the second floor windows, there is a massive convex cornice, while the parts of the second floor axis are concave. Underneath, there is a fluted cornice with two slender Doric columns on the window sills, divided by a small half column with three expressive masks referring to the contemporary popularity of African and Asian art. The massively protruding crown cornice is decorated with a small plastic motif on the celling in the window axes.

In the late 1920s, the house was enriched with luxurious neoclassical furnishing in two ground floor rooms, designed by the same author for the National Club. The elegant character of the rooms was underlined by smooth wood panelling. The verticality of the furniture, the decorative stained glass composed of flat sheets of clear and coloured glass, the lights in the stylized shape of wax candles, and the elegant entrances to the rooms with strip glass panes made a very graceful impression. The atmosphere of worldliness was evoked by expressive, almond-shaped ceiling stucco. Although Waigant’s decorative stylization was still based on Art Deco, his design was already in the style of neo-classicism, which came to the fore as an echo of the Paris exhibition after 1925. Thus, the interior perfectly matched the elegant classicising concept of the exterior. What the furniture lacked in lightness and fragility was made up for by the pomp and quality design. However, since the building had various owners and purposes in the past, today we can only look at old photographs and imagine what it looked like. The interiors of the National Club have not survived.

In 2007, the street and courtyard façades were reconstructed and the decorative elements and masks on the façade renovated to their original form.

The tenement house at 543/29 ČSA Avenue is an estate cultural monument registered in the Central List of Cultural Monuments of the Czech Republic under the registration number 24142/6-4525. 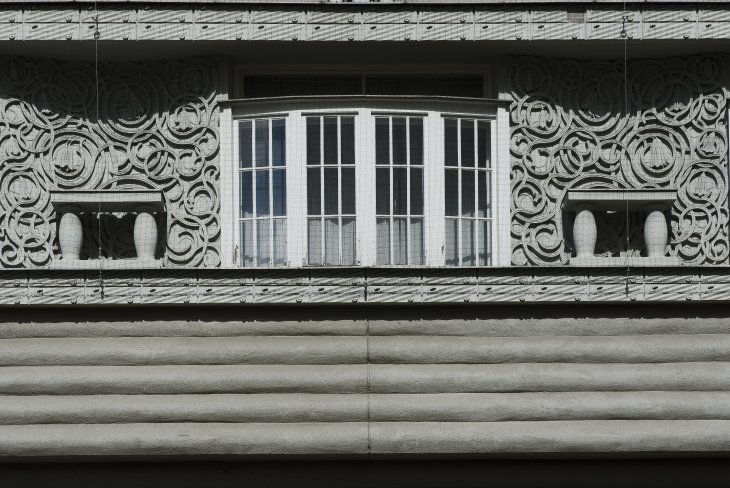 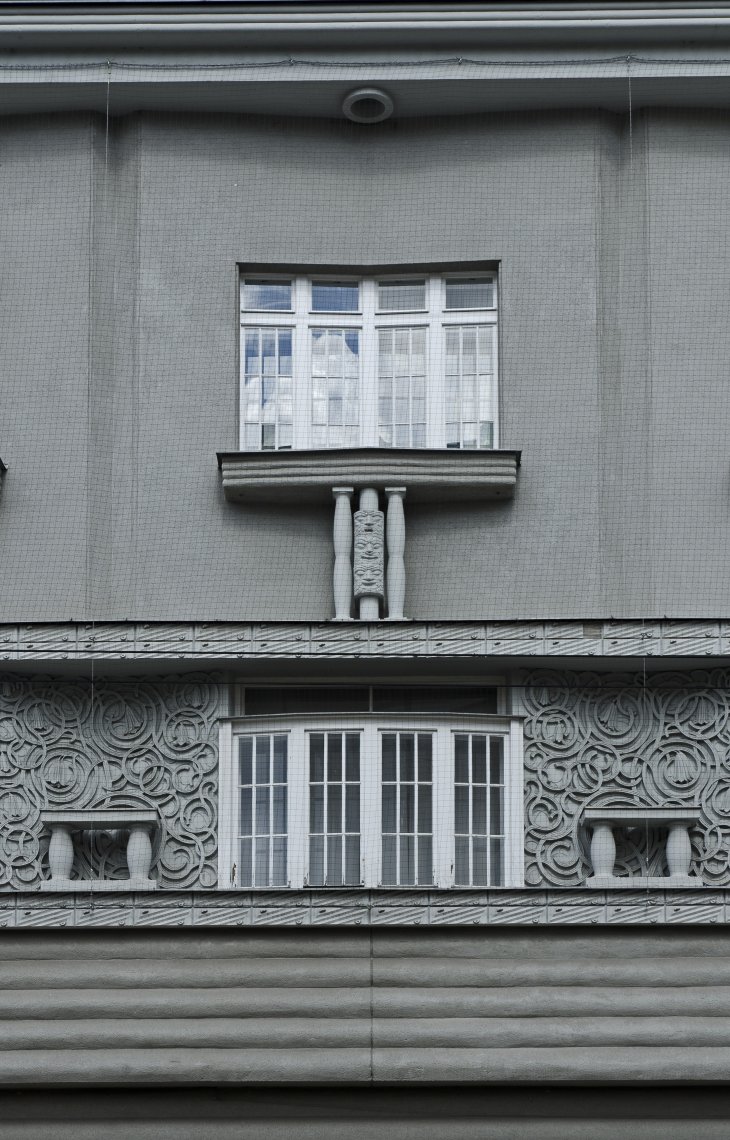 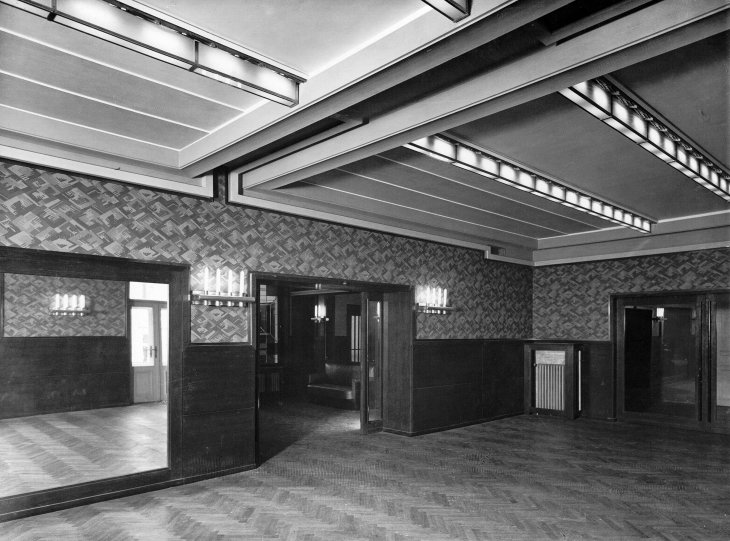