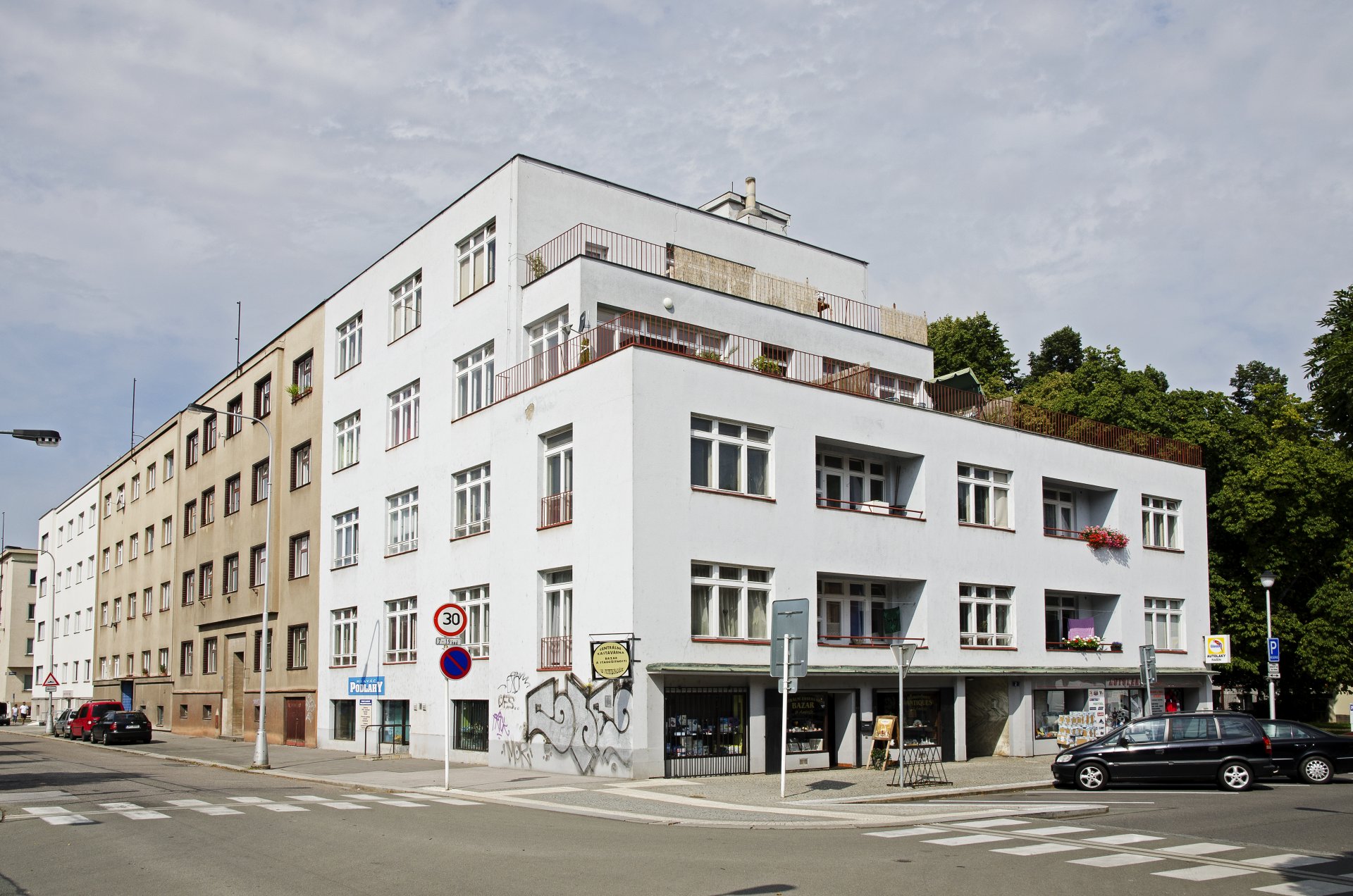 In the late 1930s, Karel Löwenbach, son of Julius Löwenbach from Hronov, a well-known industrialist of Jewish origin, built a luxurious tenement house close to the new local landmark – the complex of the Congregational House of Priest Ambrož (odkaz/kód). The project was developed by architect Heinrich (Jindřich) Kulka who had family ties in Hradec Králové and became famous as Adolf Loos’s pupil and colleague. Many of the architectural principles and procedures he learnt from Loos were also use in the project of Löwenbach’s house.

The cascaded four-storey house was designed with respect to the complex urban situation, given not only by the above-mentioned church complex, but also by the fact that the high-profile corner building opens a “cleaved” landscaped courtyard, so all its front façades had to be exposed. The façade of the lowest two-storey section is articulated by windows and loggias and includes half-embedded business premises in the parterre (originally garages). The height and width of the section were aligned with the smaller church building with facing masonry across the street. The height and width of the highest fourth floor was supposed to merge with the adjoining tenement house; the middle (third) floor was a connecting link for smoother transition. This terraced arrangement was used for large terraces lined with tubular railing, so popular with functionalist architects. The same mass gradation, which makes the scale of the interior courtyard more pleasant, was used by architect František Čížek in the project of reverse tenement house of Theodor Keyzlar, built across the street a year later.

Looking at the simple concrete skeleton and light façade of the building, one would not expect such an extraordinary interior. Upon closer observation, however, we notice the generous atypical windows, the marble lining of the relieving arch, and the main entrance, smoothly leading to the foyer and staircase hall. It is an example of one of the principles inspired by Loos’s designs, which did not emphasize the exterior, but rather the inner life of the house (“the house should be closed from the outside. It should reveal its richness inside.”).

The free inspiration of Loos’s spatial interior concept, the so-called Raumplan, can be also seen in the suspended ceilings in the apartment halls (the lower the clear height of the room, the less significant space). The concept is also visible in the multi-level layout of the three-room apartment on the first floor with an elevated private part (a room with a bathroom), accessible by taking three steps, or in the interconnectedness of the common space (the entrance hall and living room separated only by a railing with two posts). According to some scholars, this atypical, luxurious interior design makes one feel as if there was a villa inside the tenement house. Another allusion to Loos’s work can be found in the terraced volume of the house, strikingly similar to Gustav Scheu’s house in Vienna.

When the construction was being completed, Heinrich Kulka emigrated through England to New Zealand because he was afraid of racial persecution due to his Jewish origin. Karel Löwenbach was transported to Theresienstadt in 1942; and a year later, he died in the Auschwitz concentration.

Today, the tenement house is seen as a symbolic line under the exceptionally valuable urban and architectural development of Hradec Králové during era when the city was called the Salon of the Republic. Fortunately, it is now in a relatively authentic state (the preserved equipment includes the original marble panelling, the personal lift, etc.). In contrast, Löwenbach’s own apartment has been partitioned and the overall purist effect of the exterior is undermined by graffiti superfluous billboards in the parterre.

Not under a preservation order; included in the city conservation area. 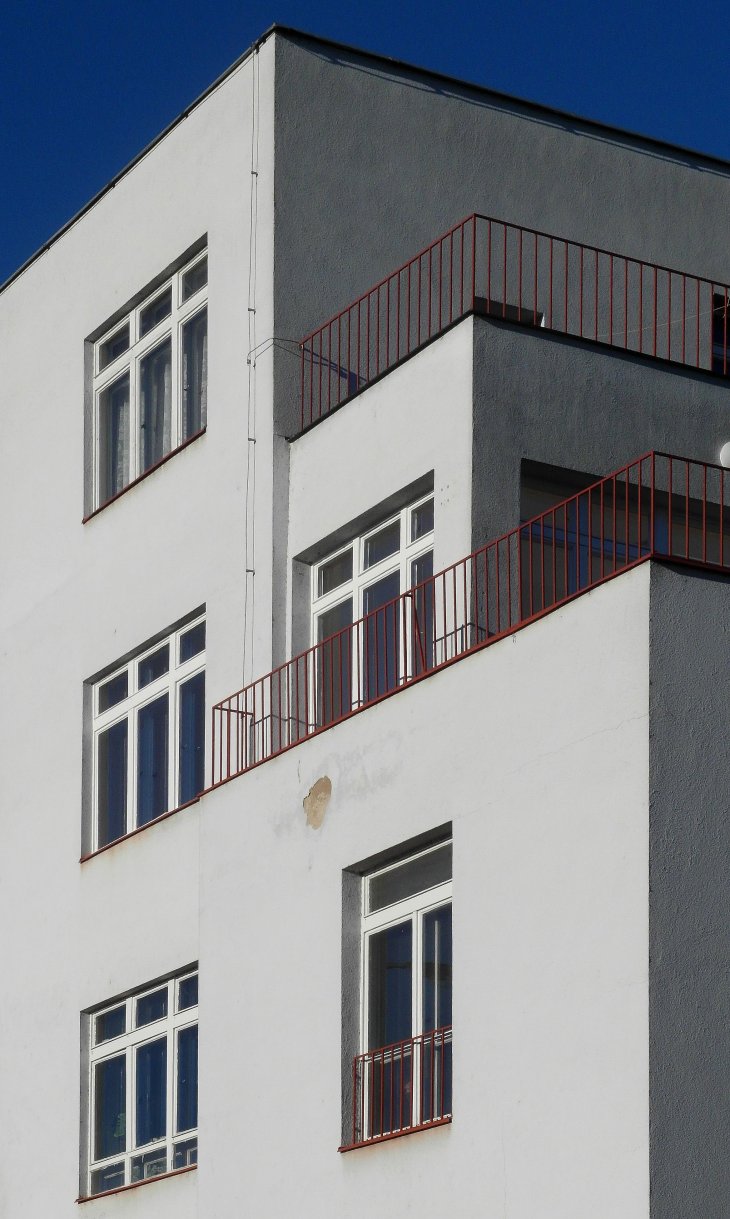 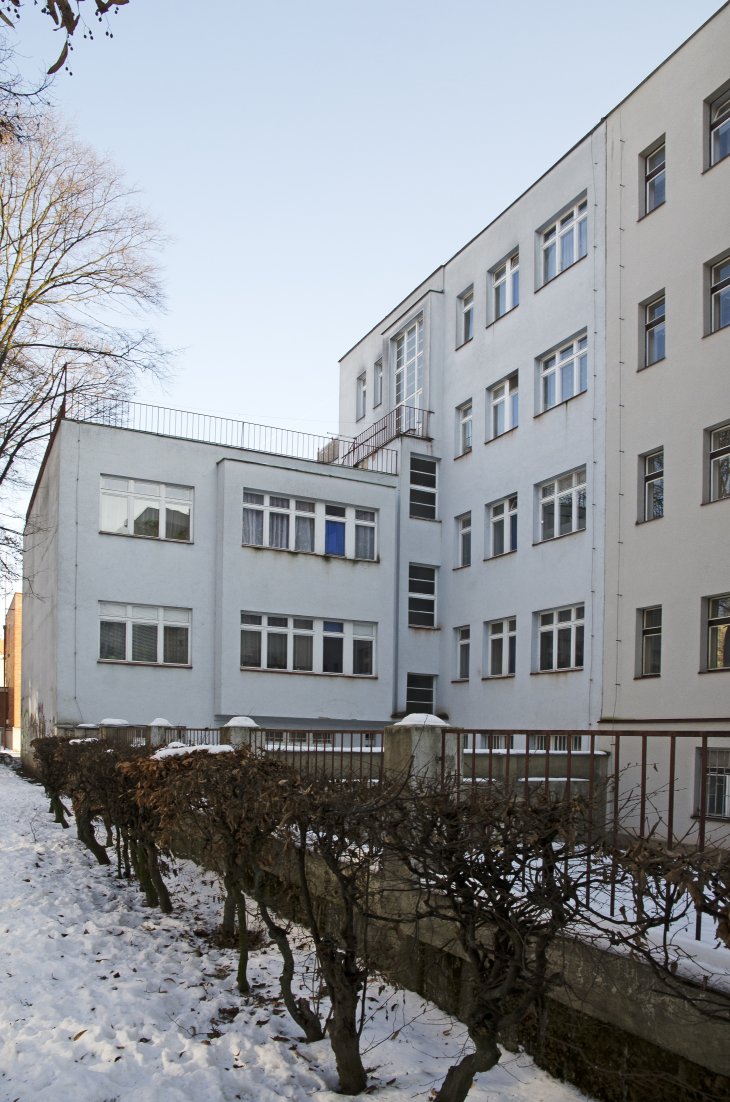 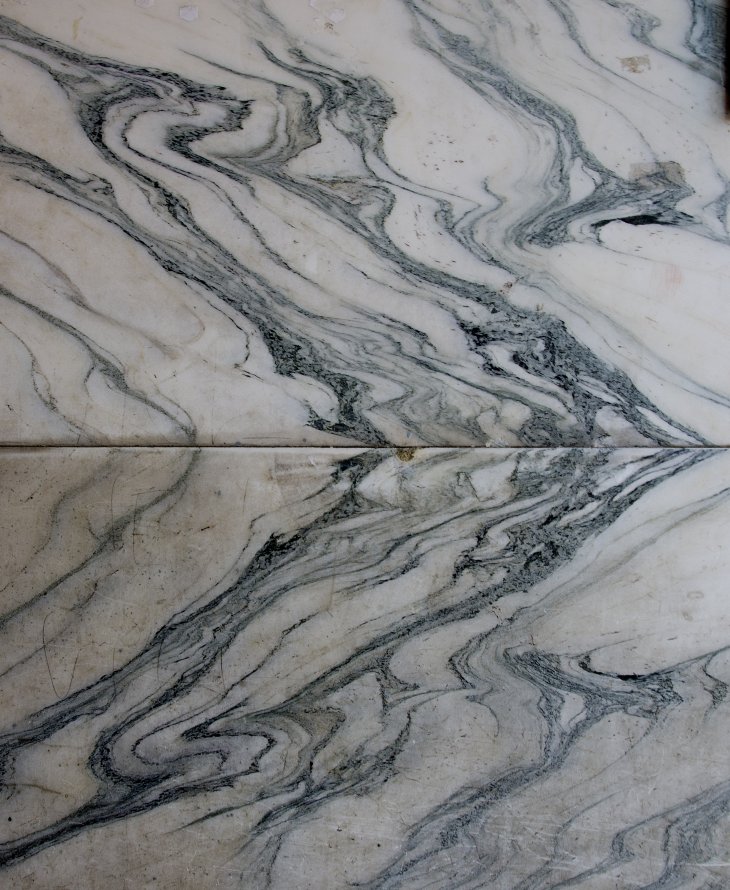