Directorate of the State Railways 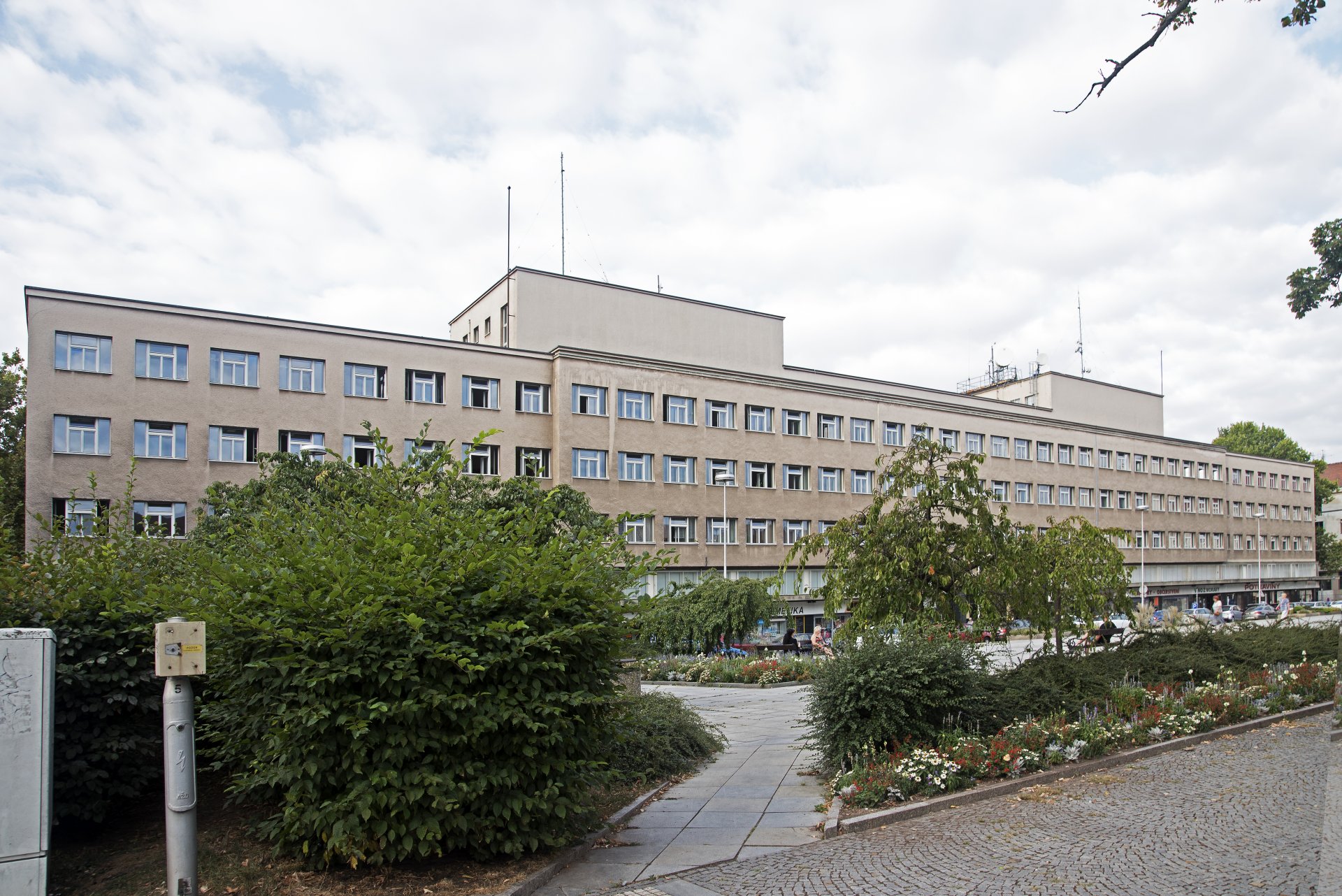 In 1925, the urban space of Ulrichovo náměstí Square was modified by Josef Gočár after he won the competition for the regulation of Pražské předměstí (Prague Suburbs). He designed a group of schools, the Czechoslovak Hussite Church with a columbarium, the Directorate palace, the Čerych Palace (1934–1935), and the landscaping. A modern quarter with open blocks and playgrounds, representing quality housing, was being built around the square. In 1926, the design of Ulrichovo náměstí Square was significantly influenced by two new building owners, textile manufacturer Steinský-Sehnoutka and the Czechoslovak State Railways. The original social and cultural centre was to become an administrative and financial one. The architect designed four-story buildings and the main street corners were raised by two floors to create the entrance motifs of the square. Near the Directorate, other architects (e.g. Oldřich Liska) designed houses for 130 clerk families. The State Railways building was designed along the width of the square, newly built as a second city centre. In 1927, a petition was drawn by businessmen residing in the old city who feared the outflow of customers after the Directorate was built. They recommended to build it in the old town and to demolish some of the historic houses.

The Directorate of Czechoslovak State Railways was moved to the city thanks to Mayor Ulrich in 1919; a year later, he suggested the Directorate could be temporarily moved to the local barracks. Some of the clerks still worked in Prague – Karlín. In 1928, Josef Gočár was asked by the Czechoslovak State Railways management to design a Directorate building that could become part of an emerging city centre. The city donated a plot for the construction and a financial contribution.

The Directorate was built according to Gočár’s plans, designed in August 1928, between 1928 and 1932. The building decorations were completed in 1934. The excavations officially started on 8 October 1928. The construction was carried out by architectural firm Josef Vyleťal and Jan Včelák. The reinforced concrete structures were ordered from H. Hacar and C. Klouček Prague company in August 1928. 10 designers and main suppliers and 50 traders from Hradec Králové and elsewhere worked on the construction. The construction costs, without the construction sites, amounted to 27.6 million crowns. The city donated the plot area of 10,038m² for free.

In 1929, the site was visited by President Masaryk. The presidential visit and the official opening of the building was filmed, but the city council could not afford to buy the documentary. The monumental building was officially opened with an industrial and trade exhibition on 30 October 1932.

With its characteristics, the building evokes the “architecture of express carriages. The horizontal façade concept with a regular rhythm of windows resembles an express train that has just stopped at the railway station.” The allusion is obvious in the gallery halls where one can enter the offices like train compartments.

The central building is 128m long towards the square; two perpendicular wings are 68m long. On the ground floor at the square, there were shops. The architect placed a reinforced glazed awning above the display windows. Pillars and beams between the display windows were lined with polished boards. In the rest of the basement, there were storerooms; the tract under the halls housed the central heating, ventilation, and a coal room. Other floors were occupied by the offices of the Directorate of State Railways. The main building entrance was in the centre of the square; the pillared lobby with a two-flight staircase led to the halls. At each hall, there was the main staircase to the floors and a paternoster.

On the ground floor facing the square, there were shops; on the third floor, there was the railway school with a dormitory. In 1934, the corner shop sold art objects by local artists. In the plan, offices with facilities prevailed. On the ground floor, there was a cash office at the entrance, the cashier’s room, a safe, the handling office, the accounting department, the chief accountant’s office, group offices, correction offices, group leaders’ offices, the writing room, the review office, the money reception office, the dispatch and shipping departments, the deputy’s office, the head’s office, and flats. In total, the building had 14 stores, 405 rooms, 918 windows and 648 doors when it was opened.

Josef Gočár used a motif of lobbies with galleries in the side wing interiors, commonly used in department stores. The gallery halls, as a new feature of administrative buildings, were functional and designed shortly after they were used in the Fair Palace in Prague before. The difference was that in Hradec Králové, all four sides of the gallery were interconnected by footbridges and accessible and light came through glass blocks. The lobbies extended over all the floors and had top lighting.

The architect designed the building as two four-storey gallery halls perpendicular to the base north three-storey tract and the connecting southern four-storey tract. The wings defined the interior courtyard with a passage in the rear of the premises.

Behind the entrance, there is a columned lobby lined with marble; its stairs lead to the paternoster (another one was built on the left in 1962–1963). In the lobby, there is a large five-part stained glass designed by painter Josef Kaplický (who was also the author of the stained glass in the Vršovice church designed by Josef Gočár). It dates back to 1934 and includes motifs of transport and railways in five windows. The stained glass is an example of Kaplicky’s monumental works for modern interiors, illustrating the pulse of modern times. In the allegorically conceived centre, there is the symbol of transport – Mercury. From this symbol, several lines fork to both sides – railways running through villages and mountains, and along rivers and seas. At the sea, a group of poor emigrants is waiting for their ship. People are carrying their luggage, waiting for their trains, greeting each other. There is no train or station, just an ordinary life of passengers. In the lobby, two original glass side kiosks and side panelling have survived.

The director’s office and meeting hall furniture with waiting rooms were created according to specific designs. The conference room furniture – a long conference table and about 30 bent chairs – has not survived. In a shallow niche, there was a long cushioned bench with backrests; above the bench, there was a wall of white frosted glass. The corridors and hall tiled floors were made of tiny fireclay mosaics.

The building had state-of-the-art equipment– steam and water heating, air heating, air suction of coal and extraction of ash, telephones, and patenosters. The lights and silver bronze articles were supplied by F. Jílek’s (formerly Otto Seitz’s) company. The windows had blinds and brown and orange paint.

In front of the building, Josef Gočár designed a monument of Mayor František Ulrich in 1925, but he was hesitant about its location (in front of the Directorate, it would clash with Stefan’s relief in the background, so it was situated in the centre in 1930). Finally, the architect decided that no statue should be placed in the square. A bust of Mayor Ulrich was placed in the lobby. In 1930, Josef Gočár completed his concept of Ulrichovo náměstí Square with the so-called quiet zone, paved with large concrete slabs.

Above the main entrance lined with syenite, a figural relief in the spirit of social civilism was created by sculptor František Stefan. It symbolizes industry, commerce and trade – or the Allegory of Labour, Trade and Transport. In the middle, there are two women leaning against the globe, holding a sundial, a locomotive, and symbols of railway – the allegory of trade. On the left, there is a group representing transport – Mercury and a hiding woman. On the right, there is the allegory of labour – a man and a woman with a branch in their hands. The sculpture and stone work was carried out by Václav Škoda.

The complex includes a villa for senior clerks, connected to the official building with a communication corridor on the first floor. The two-storey building has a rectangular layout with the retreating second floor. The building was based on Josef Gočár’s designs of August 1928 and it was built simultaneously with the administration building. The construction began on 8 October 1928, it was approved on 30 November 1932, but the villa was occupied already fifteen days earlier.

The villa included five flats for clerks (including one for a senior clerk of the railways) and a common dining area. On the first floor of the villa, there was a staircase hall with a dining room and a four-bedroom flat with a covered terrace. Above the entrance, the layout was expanded with an oriel; in the courtyard, there were symmetrical loggias; on the other side, there were balconies.

In 1930, local tradesmen established the Committee for the Cultivation of Ulrichovo náměstí Square, which ensured, for example, better lighting or planting beds. The final designs of the square date back to 1931. In 1934, the lawns were replanted with tall elms, trimmed shrubs and flowerbeds. “Hradec Králové is proud of Ulrichovo náměstí Square! ... It is not immodest to claim that there are few architectural complexes like this in the world.” The architect aptly characterized his project with the following words: “A simple form, air and light.”

During World War II, air-raid shelters were built in the back corner of the plot; in the 1950s, garages and public toilets were added. After the war, the Directorate of the State Railways in Hradec Králové was closed down and the building was transferred to the Regional Administration of the Ministry of Interior in 1962. Since then, several layout and construction changes have been made (for example, the glass corridor fronts were partitioned). On the left side of the building, another paternoster was built in 1962–1963 (there was only one on the right before).

Today, the complex serves as a seat of government offices and the Regional Police Directorate of the Hradec Králové Region. 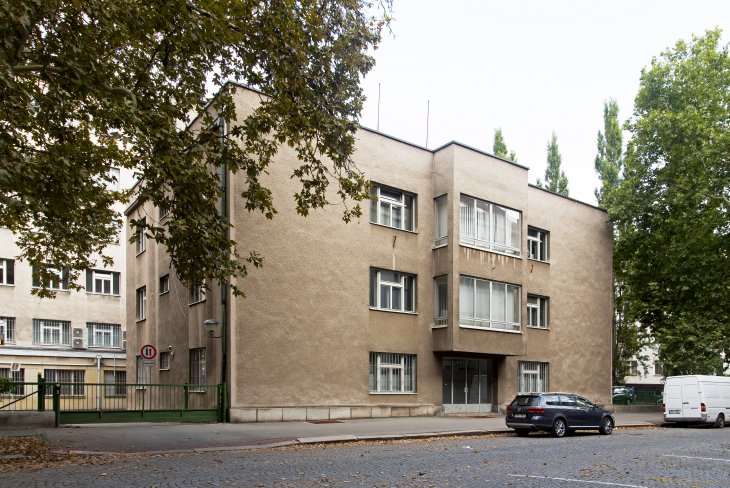 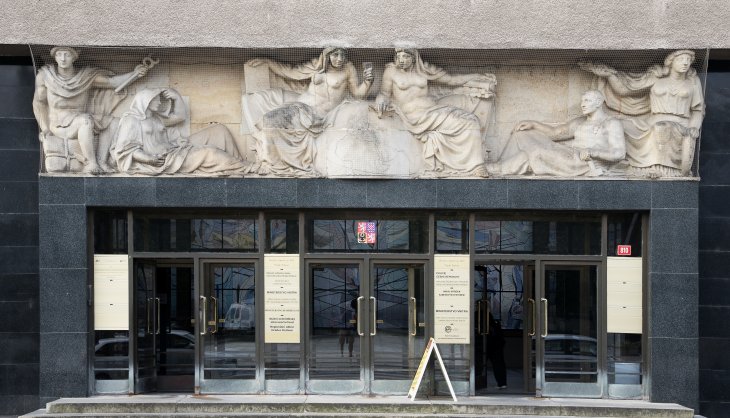 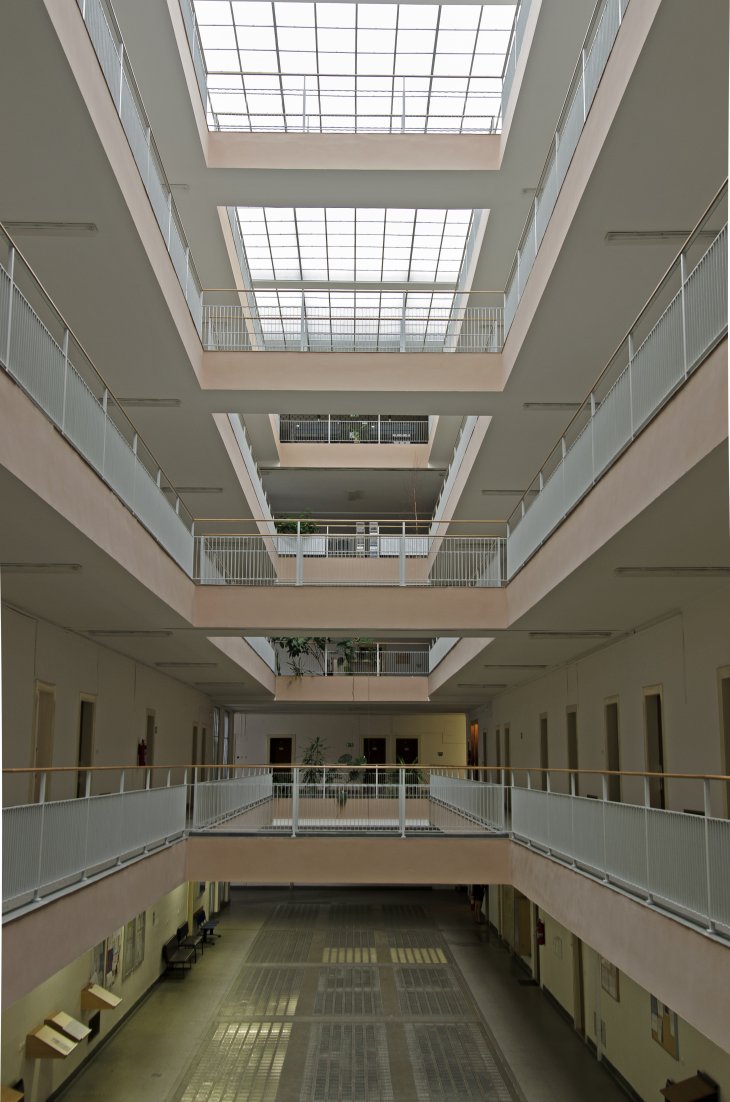 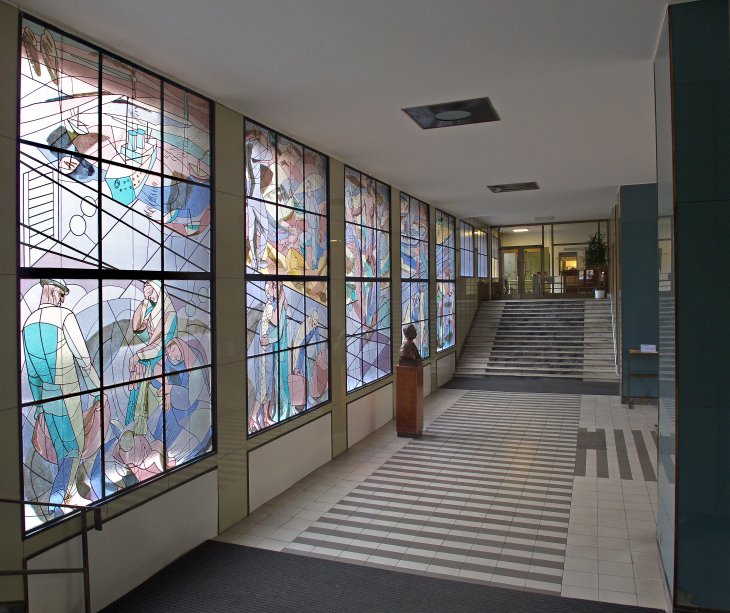 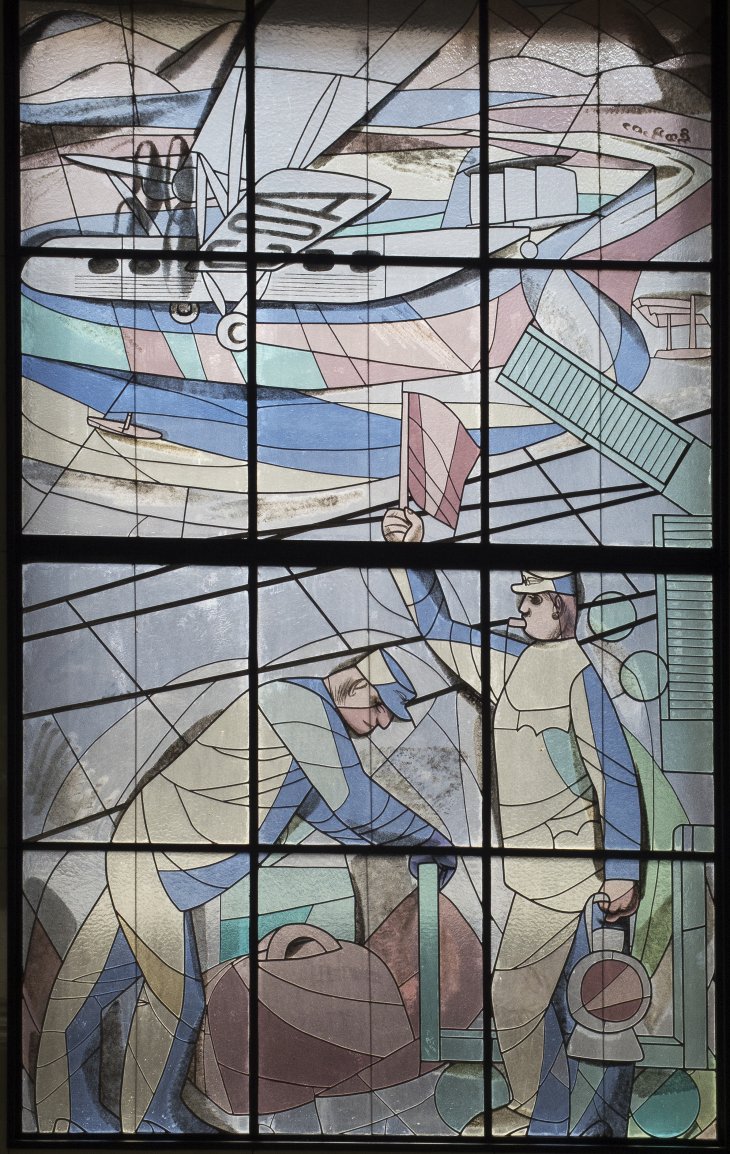 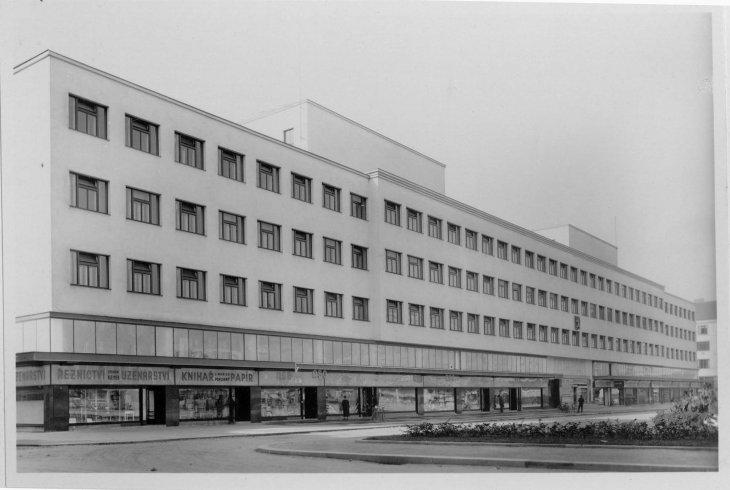 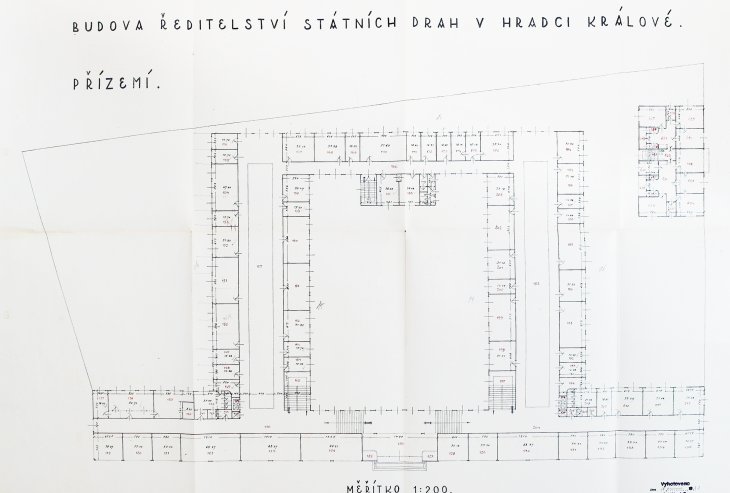 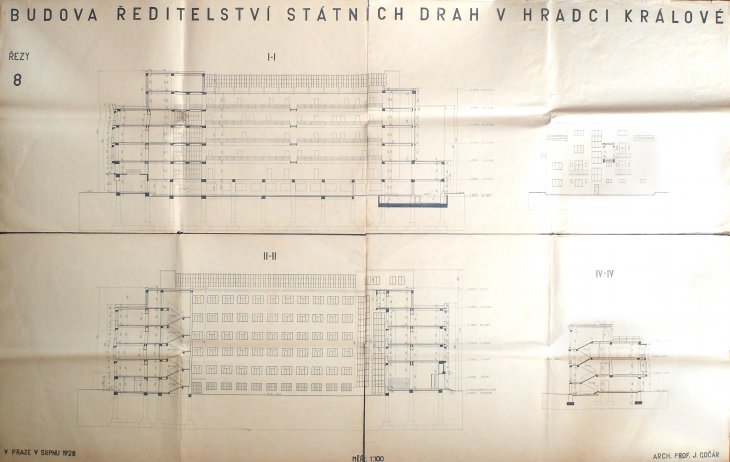