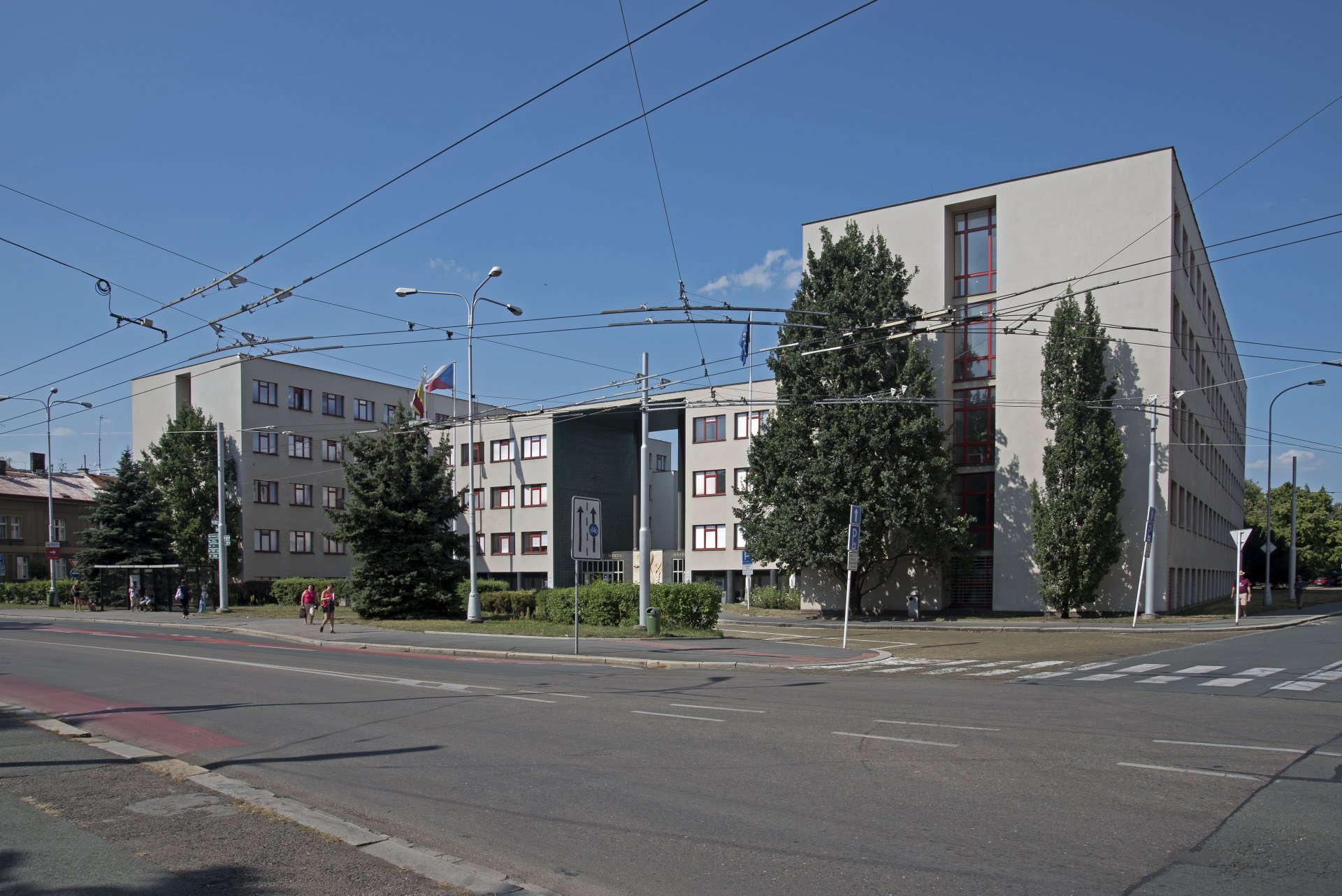 Between 1906 and 1936, the Revenue Office was located in the brewing house at 383 Československé armády Street. In late April 1929, the city council was asked to prepare a construction of a new building for the office. In January 1931, Josef Gočár, Oldřich Liska, Jan Rejchl and Bohumil Sláma took part in a competition.

Josef Gočár was asked to design the plans in four months in October 1931; the plans were submitted in January 1932. Detailed plans of the interior were submitted in November 1933. In October 1935, the architect changed the basement in the documentation: the connecting wing was to be supported by reinforced concrete columns to allow a view across the courtyard to the green orchards behind the building. The planned green belt of a Japanese garden, seamlessly joining the building with the the city park, however, could not be realized due to changes in the construction plans – the object was not accessible anymore. Moreover, in October 1935, the district office expanded the plan to have more offices under one roof. The construction started in August 1935. The three thirds of the construction cost were to be paid by the city, the state and the district respectively. It was the last monumental Gočár’s project. The building permit was granted by the city council on 23 June 1935. The construction was carried out in 14 months by builders František and Václav Capoušek, Jan Mádlík, and Jan Včelák. In terms and conditions, they agreed to employ local workers and “to use only materials and products of Czechoslovak origin”. The construction manager was builder Josef Fňouk who resigned in March 1936. The construction “swallowed” 16 wagons of lime, half a million bricks, 200 carriages of cement, and 20 carriages of iron. The rooms are lit by five hundred windows and there are 400 doors. The workers previously built the court building and after “two years of practice, they were fairly well trained”. Both the court and the offices were built by unemployed, and often inexperienced, workers sent by the local authorities. The builders protested against their further recruitment.

In front of the façade, a fountain was supposed to be built, designed in the December 1934 project. Although builder Fňouk managed to reduce the cost of the national emblem and save money by using wood windows instead of iron ones, the fountain for CZK 25,000 could not be built.

Josef Gočár designed the complex as a symmetrical ground plan in the shape of the letter H on the site of the former fort. The operation of the two institutions was separated, but a subtle roof plate visually joined them into a single architectural whole. This kind of triumphal arch served as a symbolic entrance portico to the garden in the courtyard, which was to be an integral part of the building. The architect also designed an impressive view of the future grown vegetation of a new Japanese park behind the complex. However, the harmony of architecture and nature had to be modified in detailed plans. The architect changed the layout of the entrance, added a concavely curved common entrance and visually joined the two wings with a pair of columns. The complex of office buildings, finally inspected in 1936, was the last project of architect Josef Gočár in Hradec Králové. It featured artificial stone plaster and a combination of dark green tiles in the portico and black tiles on the columns.

The view was lined with bottle-green tiles, which “gracefully revive the austere forms of the urban construction”. The tilling was carried out by Jindřich Wimmer & Comp. The company owner “said he would lay his head on the chopping block should just one tile get loose. It’s easy to say since he’s sure that this is never going to happen”. The company already had experience with tiling the local public baths, the Directorate of Railways, the railway station, Masaryk Schools, Rašín’s State Grammar School, and the regional court. The windows had brown and red paint. The oval columns were tiled with artificial polished WUKO brand stone. The entrances sides are lined with an archway on iron pillars. At the two side wings, there is a pair of high masts for national flags manufactured by Rudolf Beer’s company. The same company also supplied hollow steel door frames and frames of hollow profile steel wall walls. This construction innovation was “enthusiastically welcome” by Professor Josef Gočár.

The ceremonial opening took place 4 October 1936, while finishing works were carried out the night before. The invited guests came at 11 a.m. and dined in the Palm Garden Grand of the Grand Hotel at 1 p.m. Flags flew in the flagpoles and Mr. Fňouk designed the decorations in front of the building and in the interior. The celebration ended with the national anthem, followed by a concert of the National Guard.

The offices are 75m long, and there is a brick fence forming a closed yard in the back. By moving the building line backwards, some room for landscaping was created. Originally, a monument of Jan Žižka was to be placed in front of the entrance. In 1936, Josef Gočár designed a monument of Dr. Antonín Švehla. The monument, just like the national emblem, was to be created by Vincenc Makovský; the sketch was designed in 1936. The sculptor started working on the bust, but he never finished it. The monument did not materialize, only a communication curve along the building was created and two flagpoles on the sides built. Josef Gočár decided the monument should be created by Professor Jaroslav Obrovský.

The national emblem of the Czech lion at the entrance was designed by Vincenc Makovský. He was asked to carry out the sculpture on 24 August 1936. The small state emblem of 2.7×3.1m was made of marlite and “artistically and professionally impeccable”. The wall lining the emblem was made of Šluknov syenite. The local press, however, wrote that the lion seemed “a bit unusual, very skinny, with just an indicated mane, which looks like a craw beneath the mouth and as a cut-off bob on the back”. Until then, sculptors had to follow the model of the state emblem drawn by František Kysela – “Hradec Králové seems to be an exception even in this”.

In the centre of the three-storey connecting wing, there is the main entrance with the reception. The staircase at the reception leads to both the parts and the two-flight staircases in the wings. In the corridors, there are original ceramic mosaic tiles. The entrance divides the building into the left (district authorities) and right section (financial authorities). On the ground floor, there was the revenue office. The building also housed a police station, the pension audit office, the weights and measures office, the revenue office and the cadastral geodetic office, the district physician, a veterinarian, the marriage hall, etc. Originally, the flats were to have a terrace for clothes drying in the summer, but after an agreement with the architect, the terrace was not built. The building basement was 60cm below the surrounding ground (and included a restaurant, a buffet, a kitchen, warehouses, and garages). On the ground floor, there were offices of the same layout as on the floors; in the left wing, there were flats, and the second floor included a meeting room. At the rear of the building, there were balconies of the flats occupied by the head of the district office and police commanders.

The uniform lighting was designed by architect Josef Gočár. The curtains and blinds were supplied by Kryštof and Petříček companies. The office furniture was made by Josef Nevyhoštěný’s company which also manufactured the built-in wardrobes (probably closets) of stained oak according to the architect’s design. In the offices, the built-in wardrobes originally included built-in sinks. In the corridors, there were ceramic black and white mosaics. The walls were lined with pastel green silit boards. The local press praised especially the modern facilities – the central heating and electric lighting, the flooring materials, the light floors, the built-in furniture, and the sophisticated combination of materials.

The local press even published an epigram: “To our district and financial offices / thousands of people come for help and advices. / A new palace was built, our confidence lost; / the gate is green, the colour says a lot.”

The local press also made fun of the moving of the Revenue Office: “Taxpayers were wondering what the famed revenue screw press or tax press, the weight of which they can feel, looks like, but they have not seen it yet [...] It was probably moved at night. Nobody could see the moving of the red tape either.”

“In this construction, Gočár reached the peak of his architectural and urban art. He masterfully harmonised architecture and nature, outperforming his vision of Hradec Králové as a city seamlessly permeated with the landscape.” The landscape could be seen not only in the streets, but even in the buildings.

After 1945, there was a change of users; when regions were established, the Regional National Committee, Stavoprojekt and other offices were moved to the complex. The rooms were used for other purposes and the service flats no longer used. The layout changed, some parts were demolished and new partitions built. Later, the Regional National Committee and the Regional Financial Management resided in the building. In 1997–1999, the façades were restored and the entrance lobby reconstructed. Today, the building houses the offices of the Municipality of Hradec Králové. 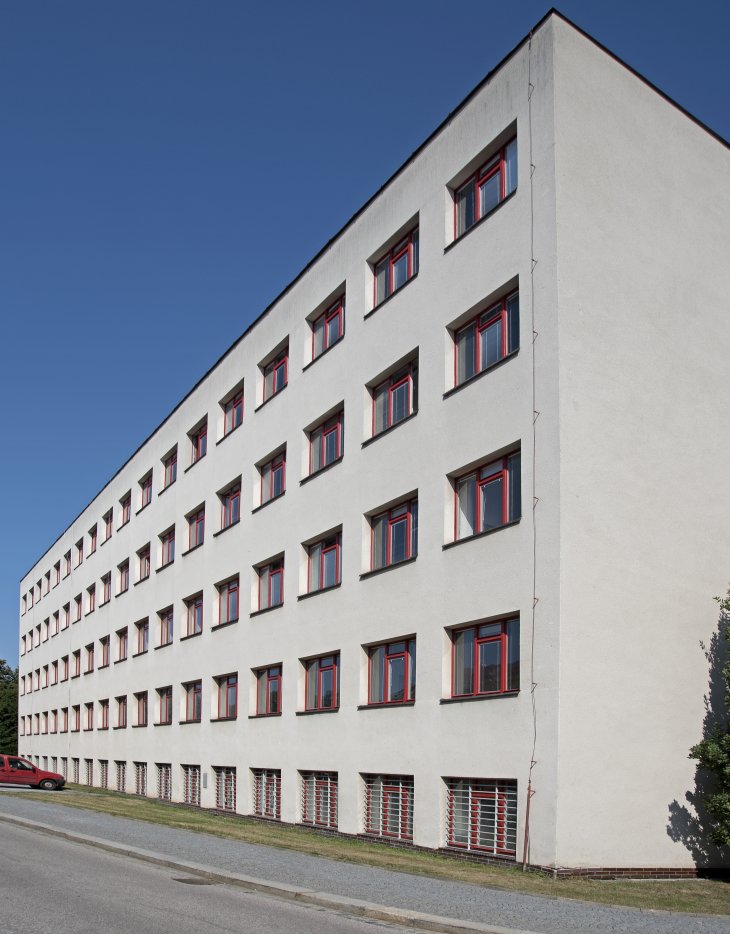 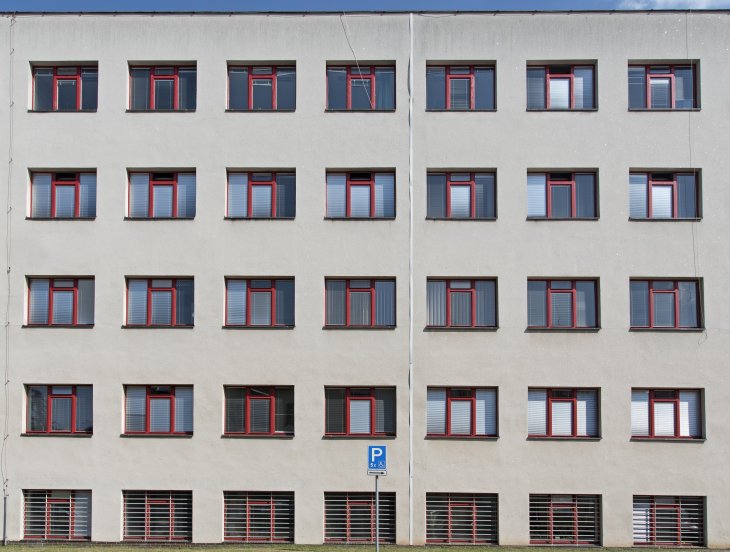 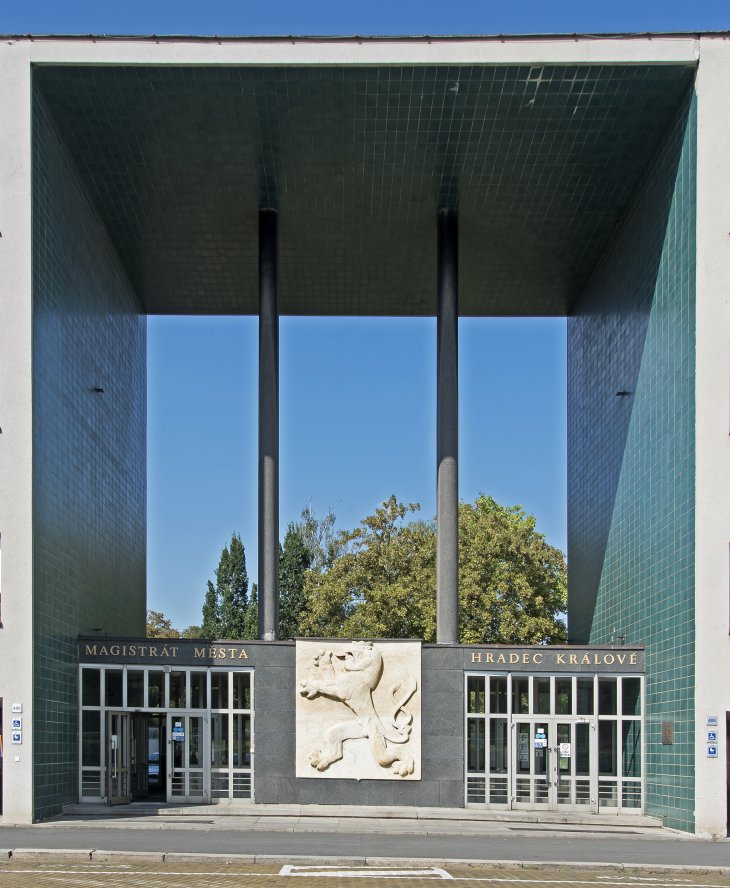 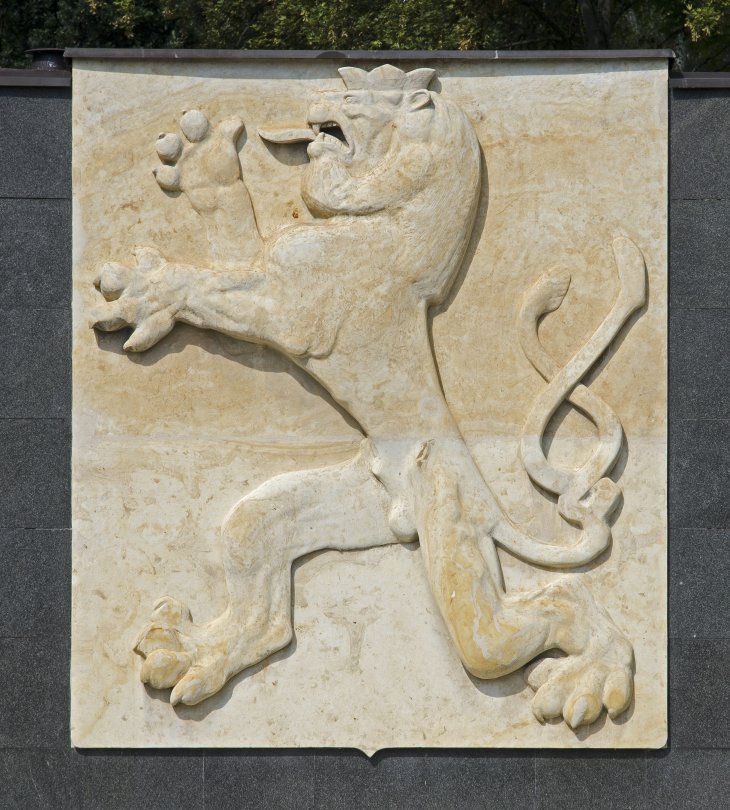 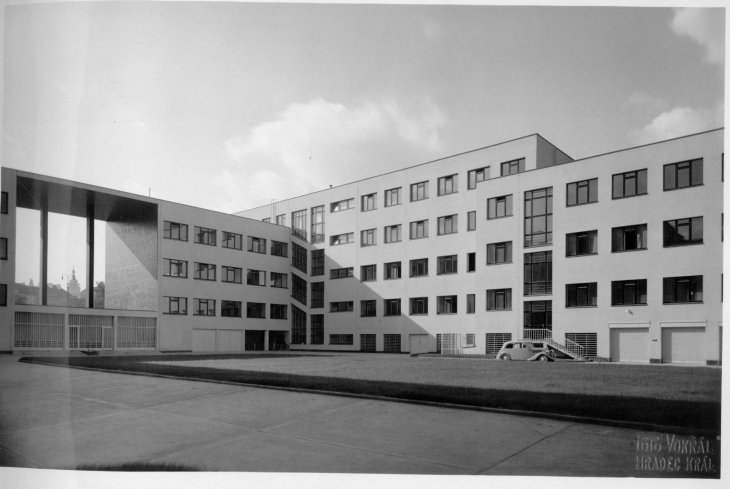 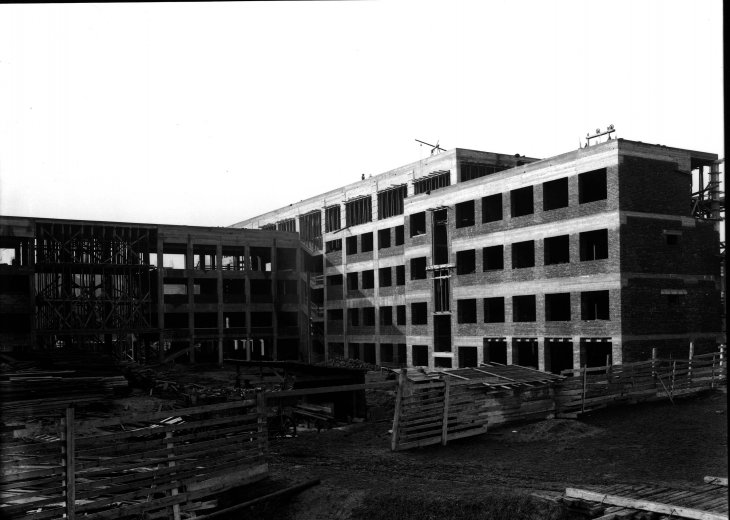 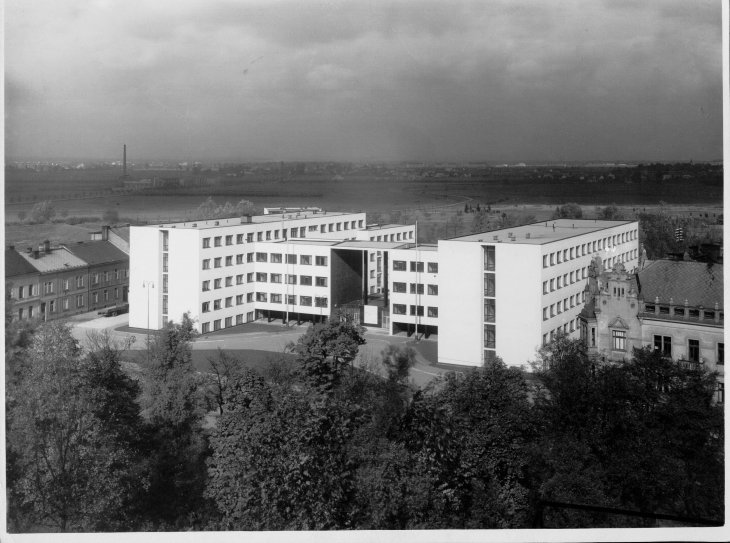 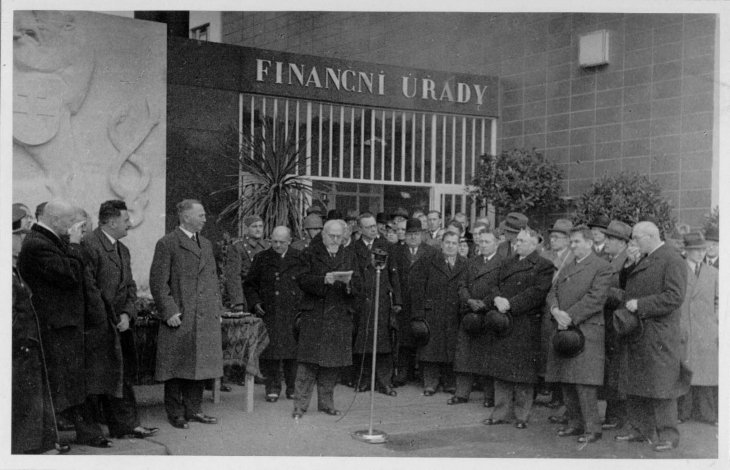