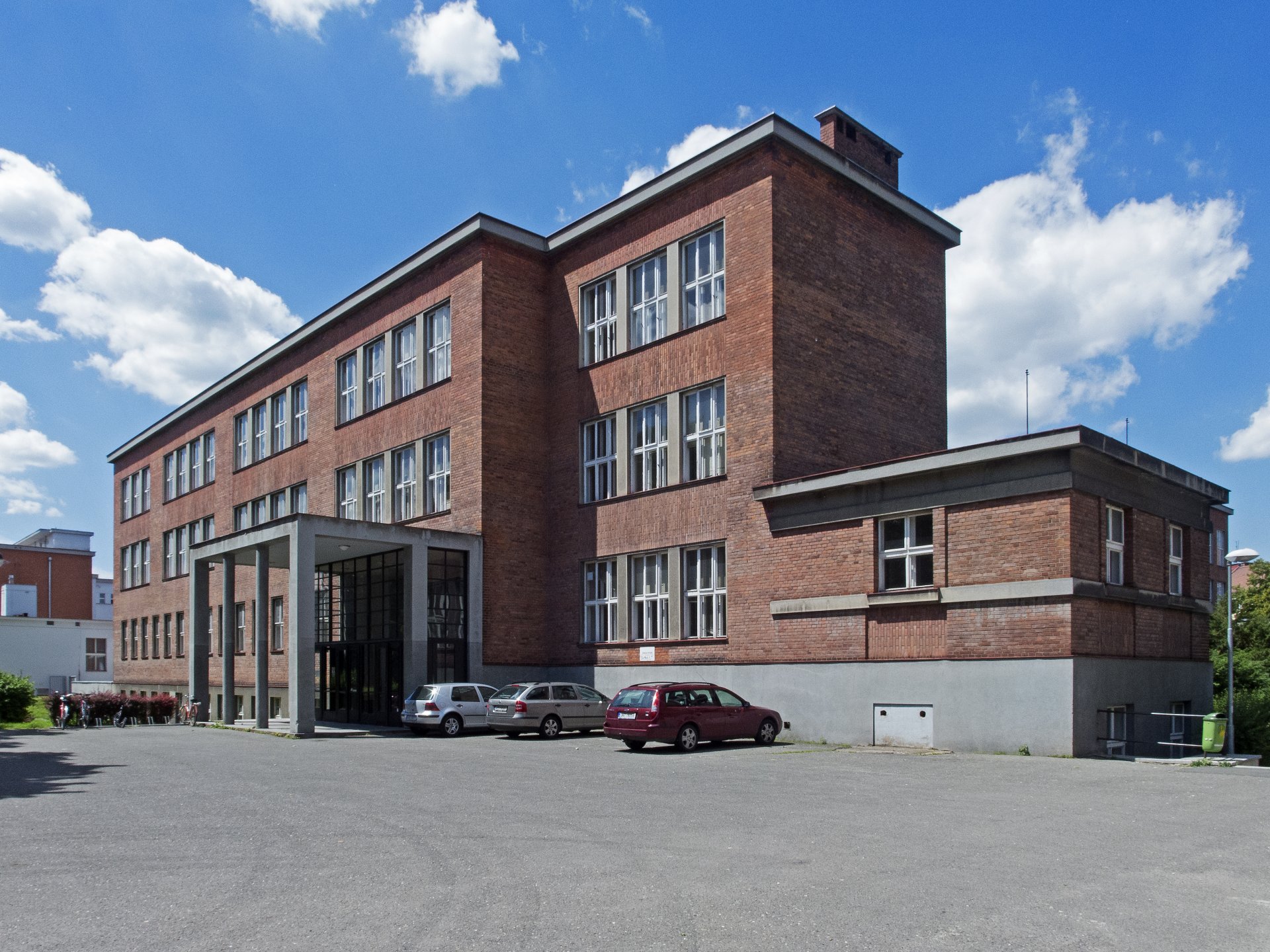 For several decades, the local school project was shaped by an ongoing discussion about the quality of the environment, lighting conditions and access to sunlight. Architects, teachers and doctors sought the best solution for the design of classrooms and spaces for leisure time activities. After the education reform, it was decided to connect the schools to the nature not only by the location of the building but also by the views of the green and the playground. The well arranged communication facilities were supposed to make pupils intuitively aim for outdoor activities. The group of buildings was designed by Josef Gočár in the spirit of the Dutch theory of building schools: the buildings should be detached and stand in a wholesome environment. They should have a gym and a playground. Direct sunlight should come to the classrooms at least for a few hours; windows should occupy a sixth of the floor area. “It is required that every child could see a piece of heaven from their seat.” All classrooms should face the south-east.

The need to build an elementary school resulted from the lack of schools. In 1924, the headmaster of the town school sent an urgent request to the city council to deal with the situation. In August 1925, a definitive programme was created: the new school buildings should accommodate 600 children in elementary schools and 300 in town schools; the nursery school should accept 80 children.

The school project came out of a short-listed competition in August 1925. Josef Gočár, who won the competition, and local architects Oldřich Liska and Jan and Václav Rejchl were among the participants. The height and masonry of the school is similar to the neighbouring grammar school. The complex of buildings includes an elementary school (no. 690) and a nursery school (no. 691). The headmaster’s villa was not built although it was designed in the plans of 1925. It was to be built on the plot facing the church of priest Ambrož, at the later realized part of the complex (in 1956–1959, the town school, no. 692 according to the modified project by Václav Rohlíček, was built). The newly created area completed the older school buildings – the Business Academy (1896–1897) and the Teachers’ Institute (1900).

Josef Gočár’s winning design introduced a new solution for school buildings in the form of a closed and symmetrically oriented complex. The concept of the schools, teaching methods and architectural form were heavily influenced by his two trips abroad. In 1924, Gočár travelled to the Netherlands; the following year, he went to Paris. When visiting the Netherlands, Gočár studied new Dutch architecture and the movement seeking to reform education, and he was so impressed he applied some of its ideas in his complex of schools in Hradec Králové. The Dutch placed school buildings in large green areas; several schools often had common courtyards and playgrounds, and an emphasis was placed on maximum hygiene, sun and air. The interiors and exteriors were interconnected as much as possible – the gym separated with a glass sliding wall was adjacent to a sports complex with a large swimming pool in its centre. The rectangular pool followed the outer contour of the nursery school and had high pyramidal obelisks along its width. A new feature in the contemporary Czech architecture of school buildings were “flat roofs of school wings [...]with partially concrete covers” that should be “used as a sun bath for the pupils” or for PE lessons. The residential roofs (the first ones in Czechoslovakia) were strongly influenced by the pioneering functionalist architecture of Le Corbusier (Gočár probably saw his pavilion L’Esprit Nouveau at the Paris International Exhibition of Decorative Arts and he also studied Corbusier’s work). Gočár met Corbusier in 1928. His design of the school complex clearly illustrates the change in the architect’s mind. While the schools feature older layers of brick architecture influenced by the Dutch style, the nursery school is a purely functionalist building.

The construction of the complex was carried out in two stages. The Masaryk Elementary School was built in 1926–1927 by local builders Novotný and Vyleťal. The construction was supervised by local builder Josef Jihlavec. The foundation stone was officially laid down in February 1926 and Gočár’s plans were approved in May. The Masaryk National Schools were officially opened on 23 October 1928.

The three-wing two-storey brickwork building features a contrast of cement plasters on the cornices, pillars between the windows, wall dados and the entrance portico. The façade facing the courtyard was plastered. The roof extensions were connected with a reinforced concrete pergola. The flat roofs were covered with cement tiles. The portal main entrances featured high columns made of artificial stone. The central part of the main façade included a two-floor gym and hall. On the north-east corner, there was a plaque with the date of construction, 1926–1927, and the heraldic lion of Hradec Králové by sculptor Josef Škoda.

The school complex was designed as a two-wing two-storey building with an elevated ground floor. The schools had a common schoolyard and cellars. The layout was based on the crossing of the wing and tract axes. Changing rooms were accessible from the entrance portico. The main two-flight staircase connected all the floors. In the northern and southern wings, there were classrooms; in the single-storey connecting wing, there was an assembly hall with a gym. In the corner avant-corps, there was a two-room flat for the school caretaker. The entrance hall led to a wing facing the school playground and the two-storey gym. The avant-corps of the main staircase extended to the courtyard. In the courtyard tract, there was the headmaster’s office, the staff room and a classroom; in the corner avant-corps, there was another classroom. The staircase hall was connected to the connecting wing corridor, allowing access to toilets and teachers’ rooms in the courtyard tract.

The waterfront entrance to the south wing was highlighted by a massive portico made of artificial stone. In the entrance hall, there was a staircase leading to the ground floor lobby and to the basement on the sides. On the left, facing the waterfront, there were classrooms; a hallway and a teacher’s room faced the courtyard. In the corner facing the courtyard, there was the main staircase. On the right, in the one-tract section, there were classrooms. The first floor layout was identical to the ground floor; in the middle, above the connecting wing, there was the assembly hall adjacent to a dressing room, bathrooms and pupils’ library. The layout of the north and south wing second floors was identical to the lower floors; at the end of the corridors, there was a two-flight staircase leading to the roof. The staircase halls led to toilets situated symmetrically at the ends of the connecting wings.

The furniture was supplied by Josef Nevyhoštěný’s company, the blinds by Kryštof company, and chandeliers by Mr. Jirouš. The classroom (partially built-in) cabinets, chairs and armchairs made of bent wood were supplied by Antonín Pecka’s joinery.

After the school complex was opened, a local newspaper wrote: “The new building of national schools could be designed in a more effective way, but it is modern, light and airy, and it looks monumental.”

Critic Karel Herain appreciates how Josef Gočár “more and more keenly incorporates not only the needs of today’s schools, but also the needs of future schools into his projects, so where the artistic form is important, he also deals not only with the school buildings themselves but also with the issue of their spaciousness, lighting, heating, cleaning, communication, leaving shoes and clothes, classroom facilities, community halls, gymnasiums, seeking practicality everywhere and the sightliness of classrooms, corridors and staircases, taking into account the garden and playground, and rescuing the buildings from the barrack architectural templates, and choosing a greater diversity and variety of open blocks instead”.

At the beginning of the 21st century, the school building, dating to 1926–1928, was used by various organizations and housed the Business Academy; today, there is a school club, a private elementary school, and a youth centre.

The former nursery school is now used as a lunchroom of Josef Gočár Elementary School (no. 692).

The nursery school was conceived as an architectural link connecting the two elementary schools. It is located in the centre of the complex and it is also the axis of its symmetry. Its appearance is known from the competition design of 1925; the final plans were designed in 1927 and the construction was finished in August 1928. The final inspection took place in 1937. The building is a proof of Gočár’s shift or transition from purist architecture to functionalism. Though small in scale, the building is a revolutionary concept and it was the first Gočár’s major work designed in his longest, most valuable and last creative period. It is quite different from the other surrounding school buildings. It was not built of bricks but reinforced concrete, and it had a white façade. The structures of reinforced concrete with supporting brick walls made the building look subtle.

The street façade is symmetrical. On the axis, the front door is covered with a reinforced concrete slab supported by two columns. The courtyard façade is lightened with covered walkways around the central arched section and adjoining sun terraces with pipe railing and outdoor staircases to the two wings. The pavilion is elevated on fifteen columns above the courtyard.

Between two horizontal terraces, there is a circle arc; behind the arc, there used to be a playroom. On sunny days, the playroom could be fully open to make the children feel like in the nature. The nursery school fascinated photographer Josef Sudek who photographed it as soon as it was built. He might have liked it because of the proximity of a hydroelectric power plant that made the impression that a steamer full of children has just landed there. This impression was ruined, however, by the demolition of the central heating chimney (the steamer chimney with a lighthouse lantern), heaving fifteen meters above the roof. The appearance of the nursery school was also predetermined by the designed pool, extending beneath the terrace. In the 1920s, water was associated with the sea and the desire to go on a cruise on a transatlantic steamer, considered one of the sources of inspiration for the progressive architecture of the times. The glazed and rounded terrace evokes the captain’s bridge of an imaginary ocean liner with massive chimneys.

According to Marie Benešová, the nursery school represents the culmination of Gočár’s “transition to functionalist architecture” and became the first work in his longest creative period.

In 1985, the nursery school was transformed into a school lunchroom (designed by V. Rohlíček); this led to substantial interventions in the interior and exterior construction, including the demolition of the chimney. In the central section, there is now an issue counter; on both sides, the original playroom was transformed into a lunchroom. The covered walkway around the courtyard arched section and the side basement wings are glassed. 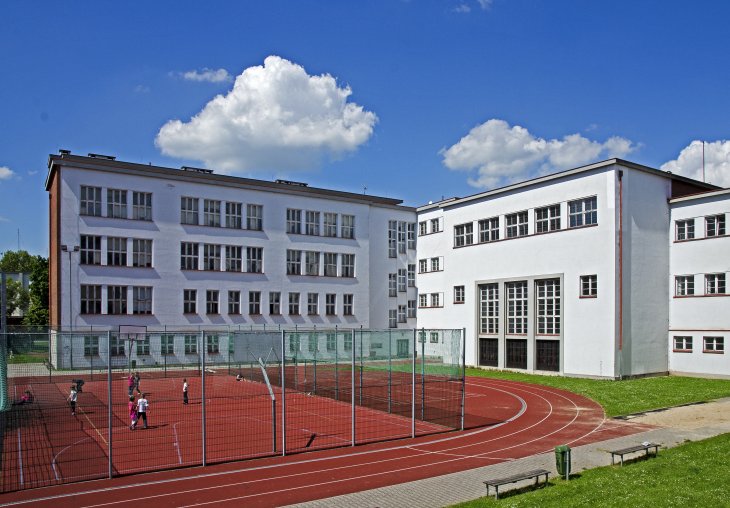 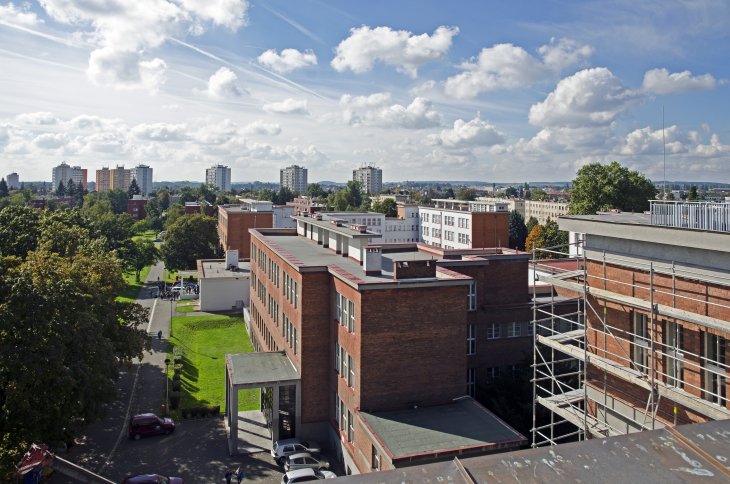 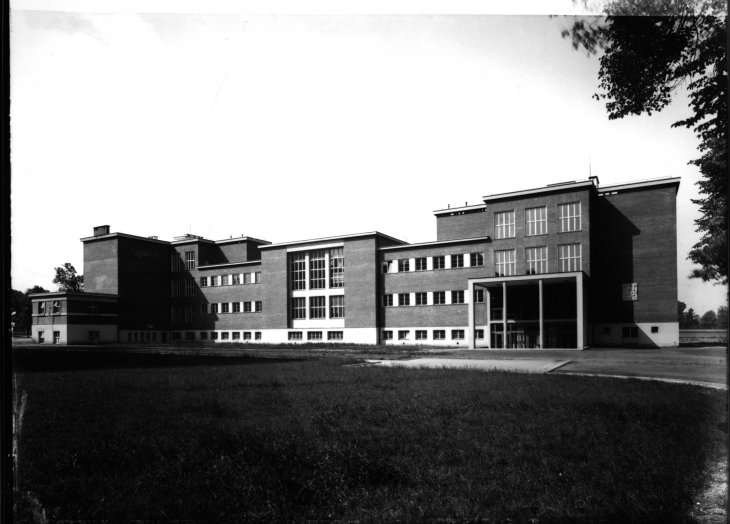 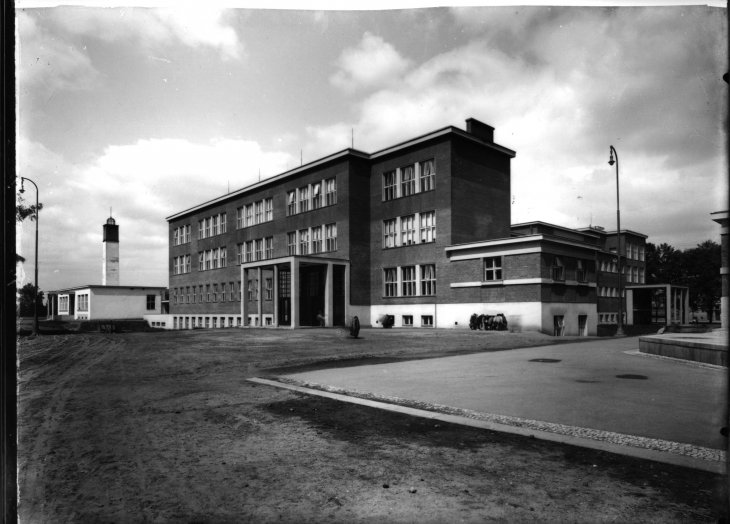 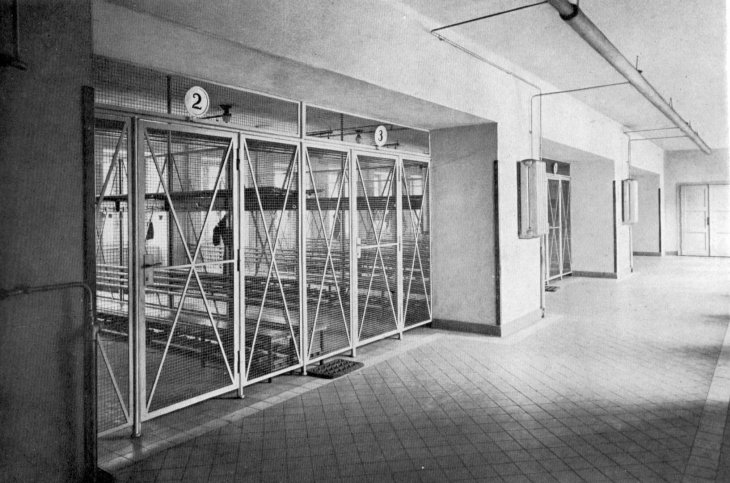 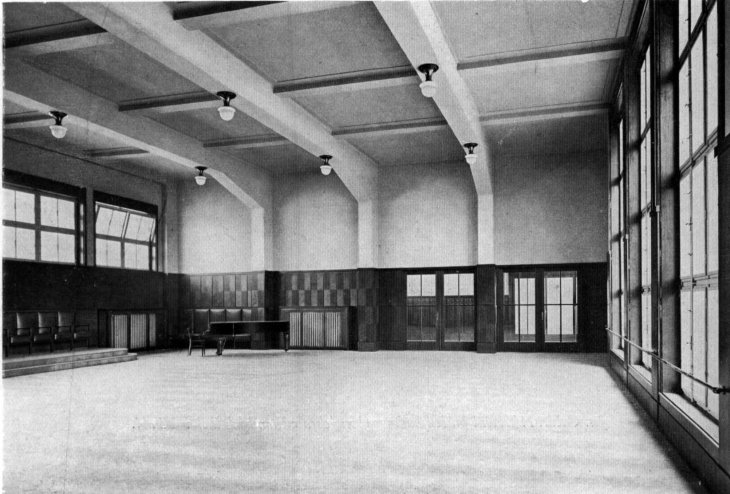 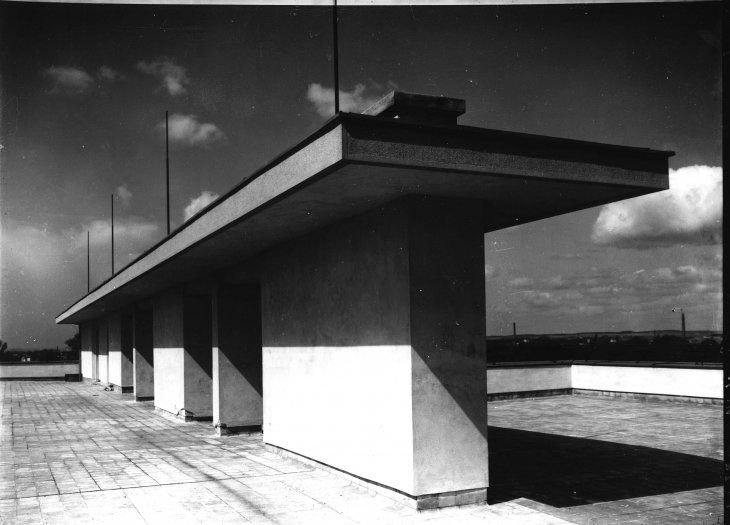 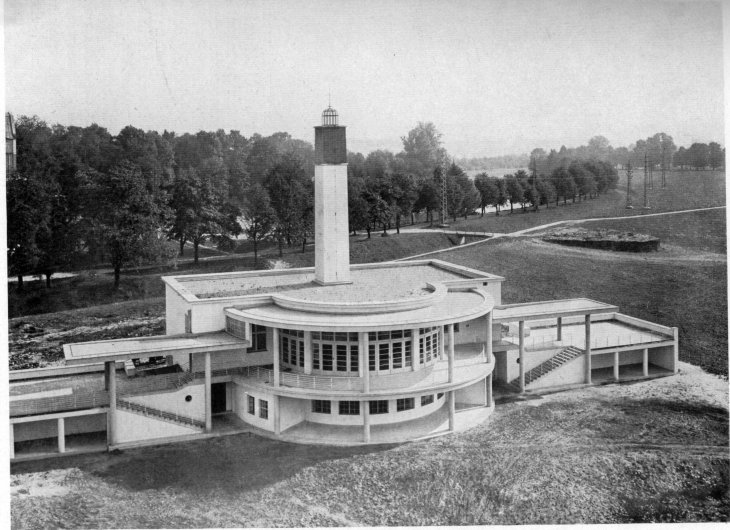 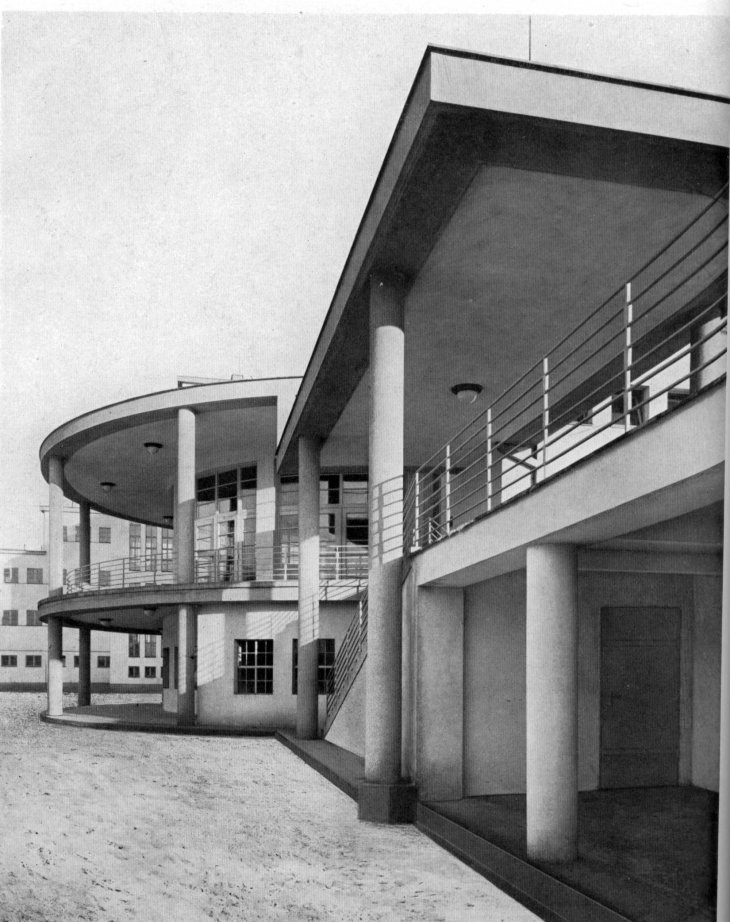 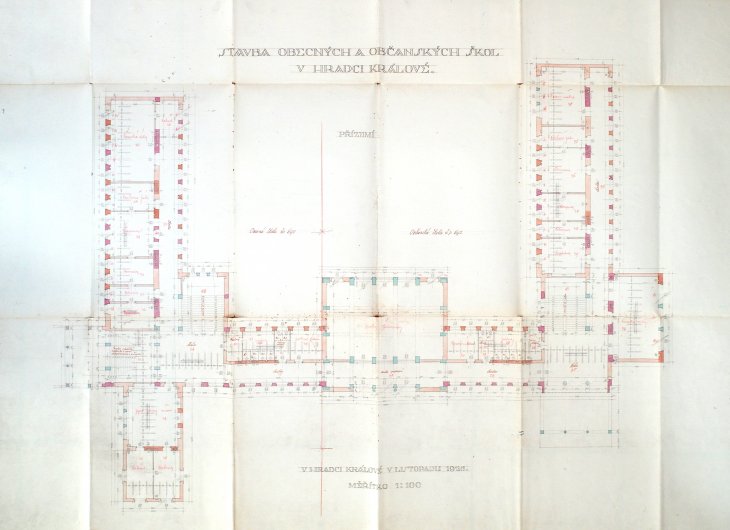