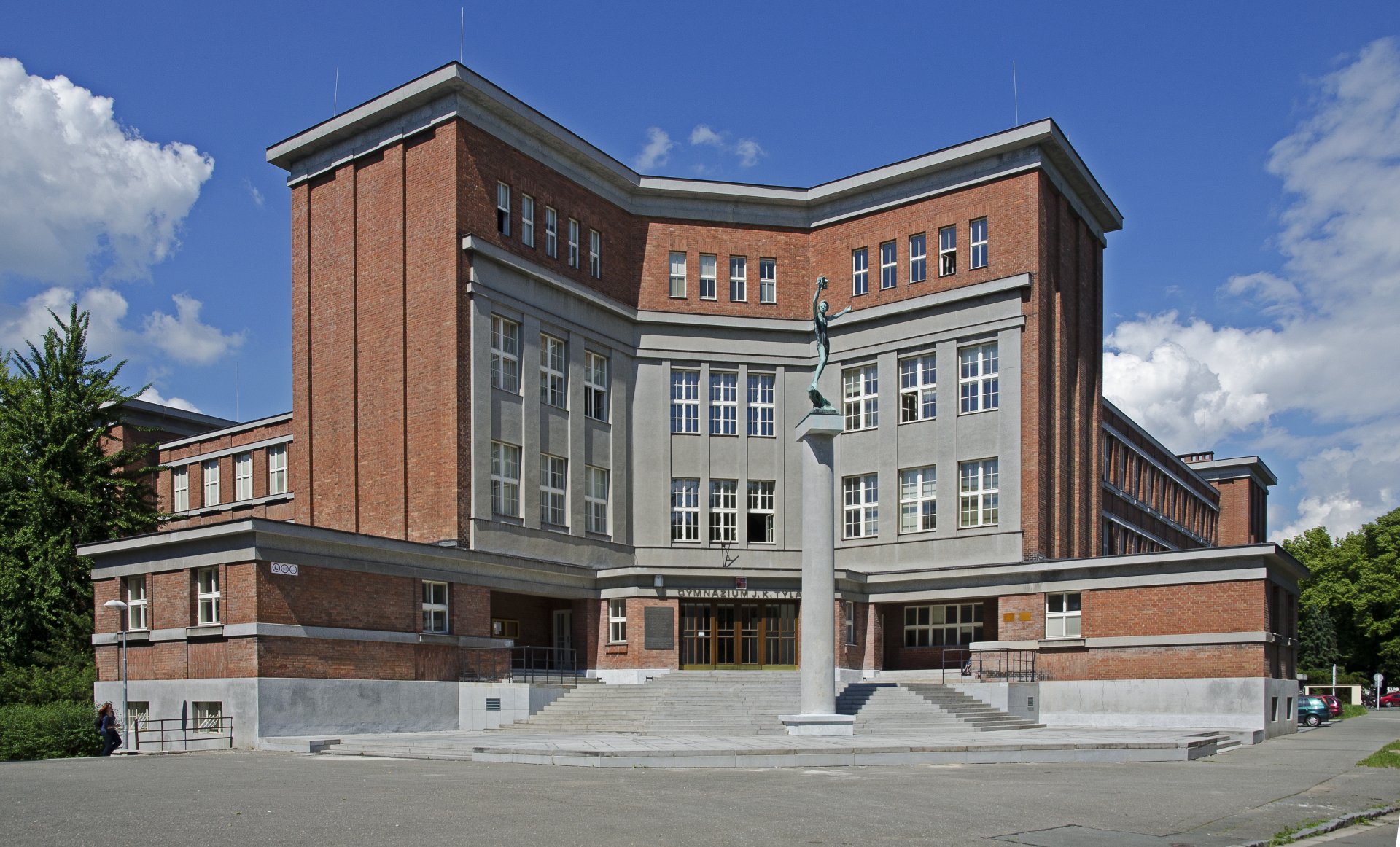 Local press often stressed the need to build a new efficient building for the grammar school in Hradec Králové. In the unsuitable old building in Velké náměstí Square, there was not enough space for teaching crafts, for example, “unless the students knitted stockings”. Poet J. S. Machar even called the building “Hradec Králové jail”. The working committee for the new grammar school building was established on 22 July 1922. In October 1922, a plot behind the Business Academy was chosen out of four plots offered by the city. In late 1922, the city and the relevant ministries signed an agreement: the construction of the building was to be funded by the state and the city should donate the necessary land and some money. The following year, the building site and the winner of the competition were chosen. The school is one of the buildings in the uniformly conceived school district designed by Josef Gočár in the district of Zálabí in 1925–1927.

The Hradec grammar school had several prominent graduates, for example, writer Alois Jirásek, poet Karel Jaromír Erben, and writer Karel Čapek. In 1927–1929, it bore the name of another graduate, the first Czechoslovak Minister of Finance, Alois Rašín. František Ulrich, who was the mayor of the city between 1895 and 1929, attended the grammar school in the Jesuit College building in Velké náměstí Square as well. In 1914–1927, the grammar school was situated in Borromeum (now the Episcopal Grammar School of B. Balbín). Since 1952, the grammar school has been named after dramatist and writer J. K. Tyl, who studied there for two years.

The project of the grammar school came out of a competition in 1923, and the plans were designed by the competition winner, Josef Gočár, in June 1924. The construction was carried out by Václav Nekvasil and Robert Schmied’s company for 6.3 million crowns. The entire complex was built relatively quickly. In mid-January 1925, the layout was delimited, preparatory construction work started, and the rough construction was completed in the same year. In February 1925, the actual construction started, and the building started serving its purpose in May 1927. The complex includes the school buildings, the headmaster’s villa (no. 883), and a gym with a glass wall facing the courtyard. The designs of the interior date back to 1925–1926. The school was moved to the new building between 25 and 30 April with an eager help of the pupils and the majority of teachers. First lessons were taught on 1 May 1927. The official opening took place at the weekend of 3 and 4 September 1927. It was attended by Mayor Ulrich and the Minister of Education, later Prime Minister, Milan Hodža. Official greetings were also sent by the most famous living school alumnus, writer Alois Jirásek, who could not come for health reasons. The ceremony was very patriotic.

In 1926, the offence court dealt with the ceilings that collapsed during the construction. In August 1926, the concrete ceiling on the first floor collapsed with workers, broke through the ceiling of the ground floor, and “the workers consequently fell down to the cellar”. The legal expert revealed the cause of the accident was an early removal of the posts supporting the first floor ceiling. The accident was not caused by the architect, poor design or work, but by the construction manager who ordered to remove the posts. The reinforced concrete work was first carried out by a local company, Ing. R. Pilňáček. After the collapse of the concrete ceilings in August 1925, the work was taken over by a Prague firm, Ing. Skorkovský.

The construction was delayed by the lack of bricks. The builders struggled with this problem throughout 1925, yet they managed to complete the construction by the end of the year. “During the building of the façade, an old problem with the East Bohemian bricks appeared, i.e. a considerable amount of sodium sulphate that is a blemish on the walls. Since the East Bohemian bricks were not fit for the façade brickwork, it was negotiated that Tomášek’s brickworks in Vysoké Mýto would supply bricks produced according to the instructions of Professor Burian of the Technical College in Prague and Upper Silesian coal would be used to burn them. New bricks were really much better.” The bricks produced by Josef Tomášek’s brickworks were also used to build the museum designed by Kotěra.

In 1926, the internal plaster and façade of the school building and villa were made, and during the winter in 1926–1927, all the interior work was completed. The building was to be handed over to the school management on 1 March 1927. This did not happen since the grammar school also needed furniture. The commission for occupancy permission met on 21 April 1927, the building was finally inspected on 1 May 1927 and officially opened on 3 and 4 September 1927.

The entrance façade emphasizes the rectangular opening into the area. The elevated corner of the three-storey building with a huge attic cornice leads to two two-storey side wings, previously housing two flats. The northern wing is connected to the gym with a ground floor corridor. When designing the street façade composition, the architect used the colour contrast of the brickwork and the cement plaster on cornices, wall dados and parts of the main façade.

In front of the entrance, there was a column statue, Winner by Jan Štursa. In his draft of 1923, Josef Gočár originally did not think the statue should be placed there. He probably changed his mind after the success of his pavilion at the Paris Exhibition in 1925. Winner and the staircase form a monumental entrance. The artwork was donated to the school by the Ministry of National Education. The statue was brought to the city in late January 1926, together with the national emblem by Otto Gutfreund with the dating of 1925–1927, originally placed in the Paris exhibition pavilion. Originally, “a bust of the late emperor” Franz Josef was placed on the column. Since the establishment of the Czechoslovak Republic, the column was empty, and in 1922, painter Stoklasa donated his bust of Comenius to the school to make the pupils realize the importance of education. On 12 January 1926, “...a carriage with Štursa’s Winner and Guttfreund’s emblem of the Czech lion came from the Paris exhibition of decorative arts”.

The youth holds a linden branch in his right hand. Theorist Petr Wittlich described the Winner as a “subtle, almost soaring juvenile male nude, [whose] festive [...] poetic gestures [...] expressed a kind of Preislerian sadness and impression”.

Behind the exterior triangular staircase, there is the lobby entrance, which is the main communication element. In the north and east wings, there were classrooms and teachers’ rooms; in the corner wings, there were originally two-room and one-room flats. On the first floor of the north wing, there were the school management offices; in the east wing, there were classrooms, lecture halls and teachers’ room. The second floor had the same layout and included laboratories. Next to the lobby, there was a side staircase to the third floor with teachers’ rooms and equipment storerooms. In the interior, original doors, tiles and lights in the corridors have survived. In the ground floor lobby, there is a marble sink designed by Josef Gočár. The lighting fixtures were supplied by Otto Seitz’s company, the furniture by the company owned by Josef Nevyhoštěný (who also designed it).

The building has a basement. In the north wing basement, there was a classroom, a teacher’s room, the teachers’ library, a dining room and a kitchen; the east wing included a boiler room, a teachers’ room and laboratories.

The northern wing was connected to the gym with a corridor whose longitudinal axis was parallel to V Lipkách Street. It has a layout of a rectangle with a pentagonal apse. The gym construction consists of reinforced concrete frames dividing the interior and façades. The ground floor corridor included shower rooms, changing rooms, a tool room, and a teacher’s room. The gym had a semi-cylindrical roof and a glass wall facing the block. The ceiling was made of reinforced concrete with visible frames.

The headmaster’s villa (no. 683) is a brick detached house with a tented roof. There was a cellar and workshops on the ground floor, a three-flight staircase, classrooms and teachers’ rooms. The plans were designed in June 1924; the construction was completed in July 1926. In July 1925, Rudolf Schenk became the headmaster of the new grammar school. He moved to the villa on 1 August 1926. Josef Gočár designed the villa as a private house for the headmaster, his family and a maid. However, the villa served the original purpose only until 1939.

In the grammar school project, the architect used the layout and architectural design of the older tanning school, but he simplified the overall look of the building. He divided the wall surfaces of the red brick building using a fine vertical rhythm. On the entrance façade, based on the rectangular floor plan and symbolizing an open book, we can see Gočár’s effort to create his own distinctive architectural language, characterized by the synthesis of classicist and purist architecture, with “simple monumentality”. Significant classicist features include the strict symmetry of the building, the protruded cornice, and the temple staircase with the Winner by Štursa. The grammar school building and the villa marked the beginning of the construction of a school district designed by Josef Gočár. Today, the grammar school still stands aside the metropolitan bustle, yet it is very close to the centre.

In February 1942, most of the school rooms were occupied by the Wehrmacht and the district court. After 1946, there was a series of structural changes, in particular to expand the number of classrooms. In 1969, a gymnastics hall and auditorium, used as a multi-purpose space, were added. Internal modifications included mainly knocking down the old partitions and building new ones and replacing floors, windows and plumbing. The street façade remained intact.

In 1950, the villa was taken away from the school and rebuilt into a day nursery in the next two years (it served this purpose until 1986). Extensive construction work in 1957–1977 led to an increase in capacity. In 1987, the villa was returned to the grammar school and renovated to the original state. The newly restored villa was officially opened on 23 November 1988. In the spring of 1964, the school yard was reconstructed into a playground. Since 2006, the villa has been used for art and music lessons.

In 2012–2014, the grammar school building underwent renovation, which unfortunately, did not include the villa. During the reconstruction, the main entrance door was removed and a viewing terrace on the roof built. 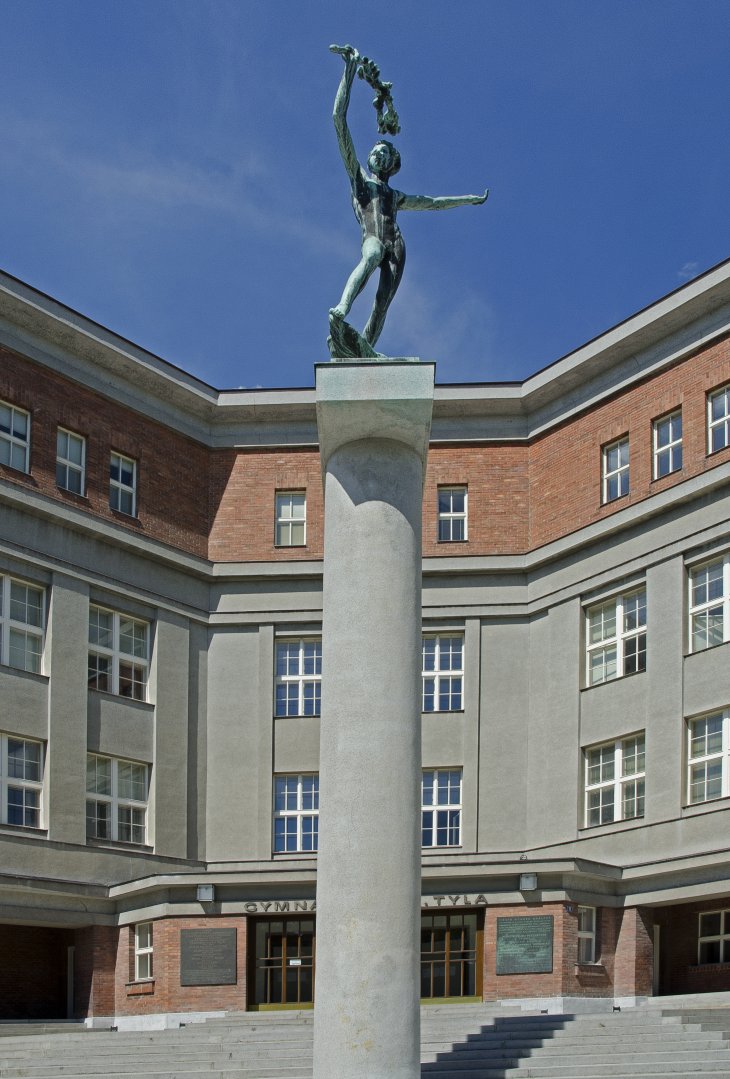 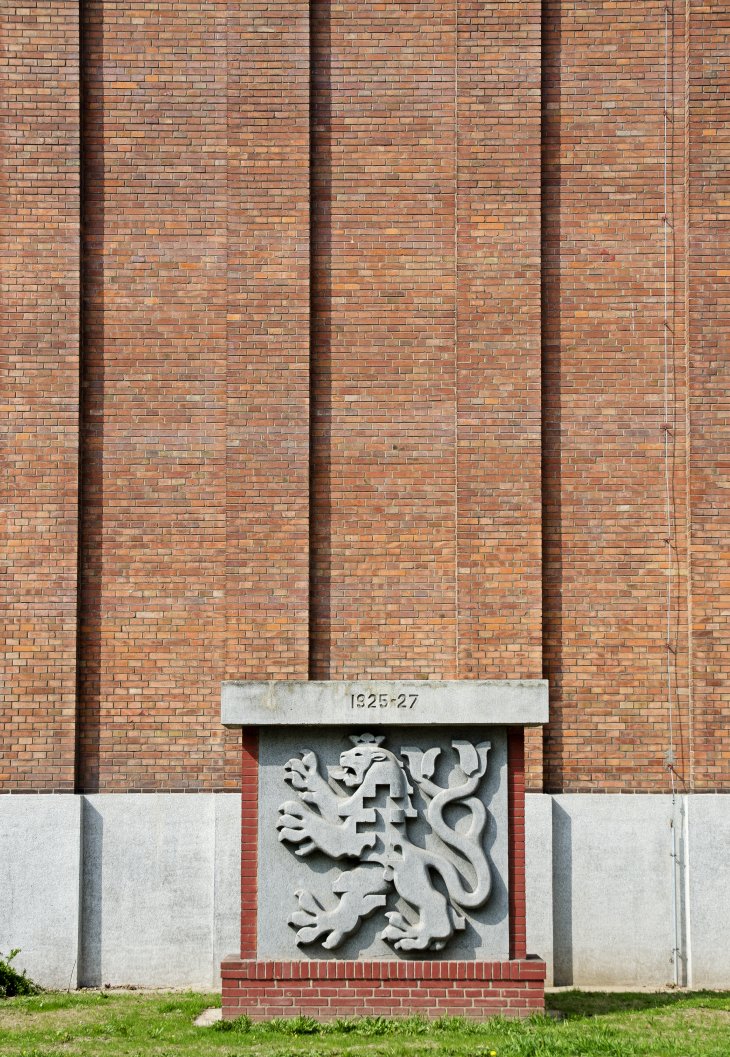 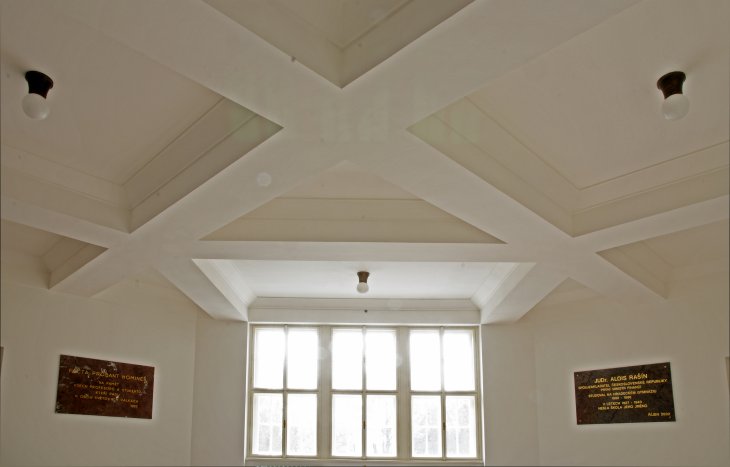 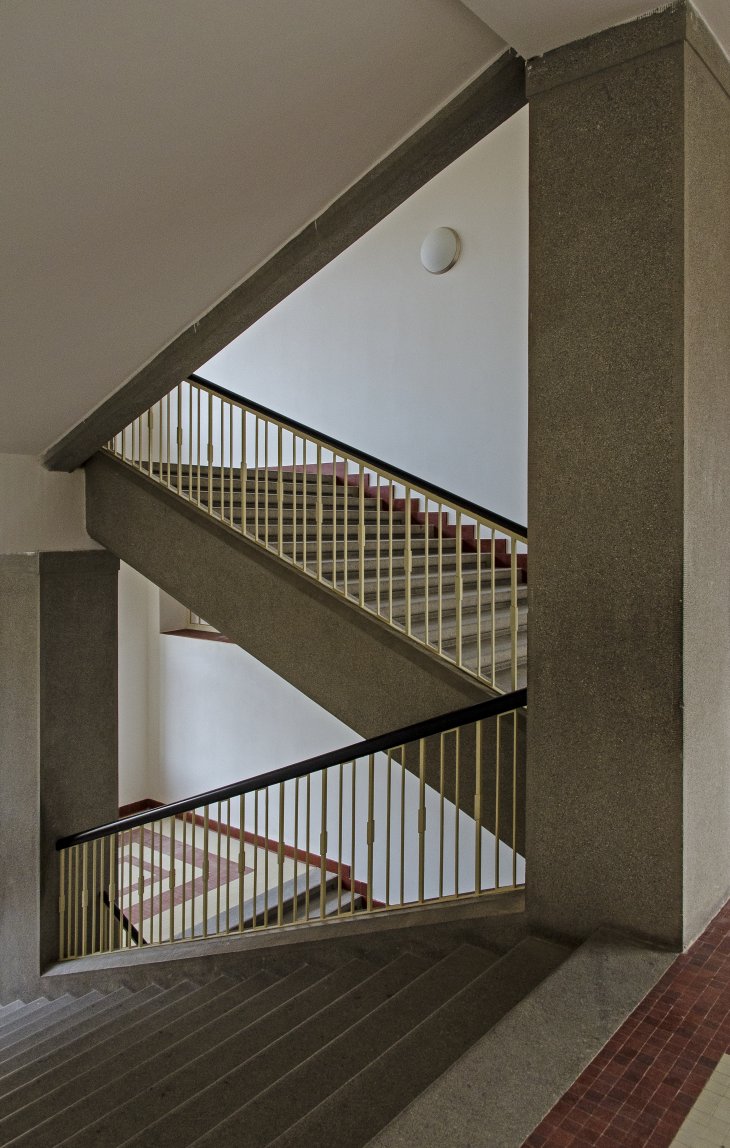 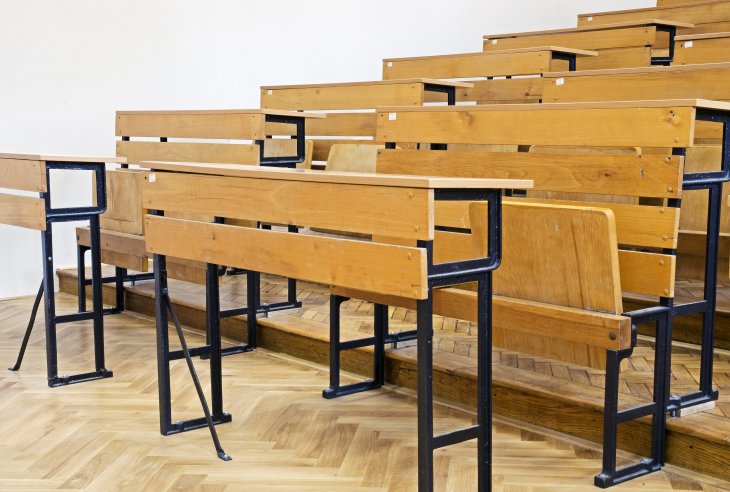 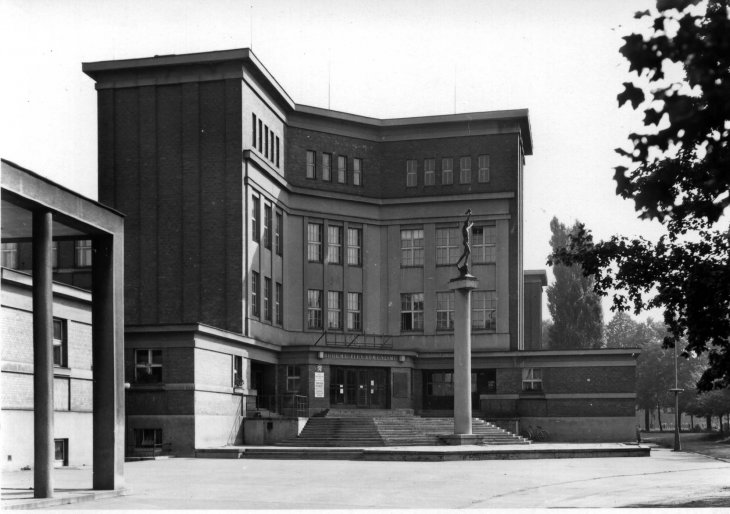 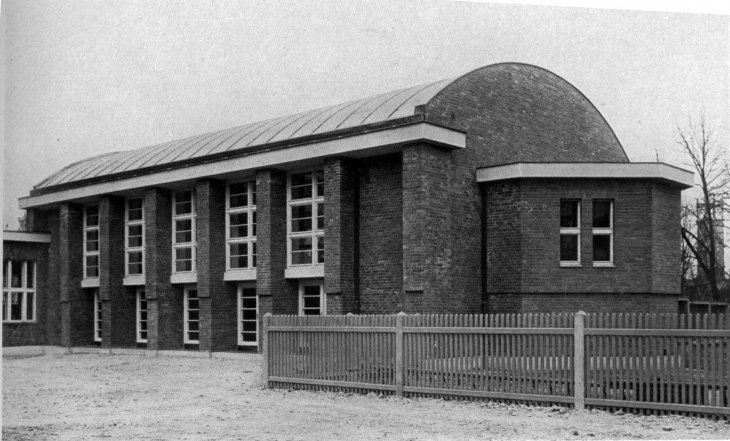 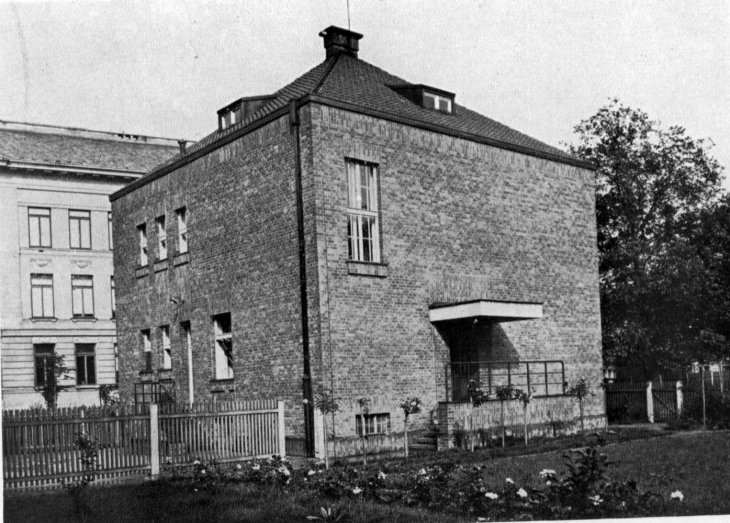 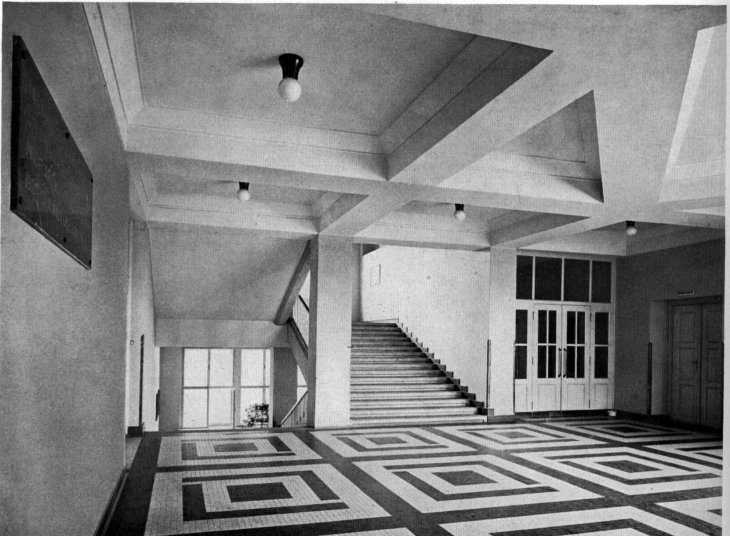 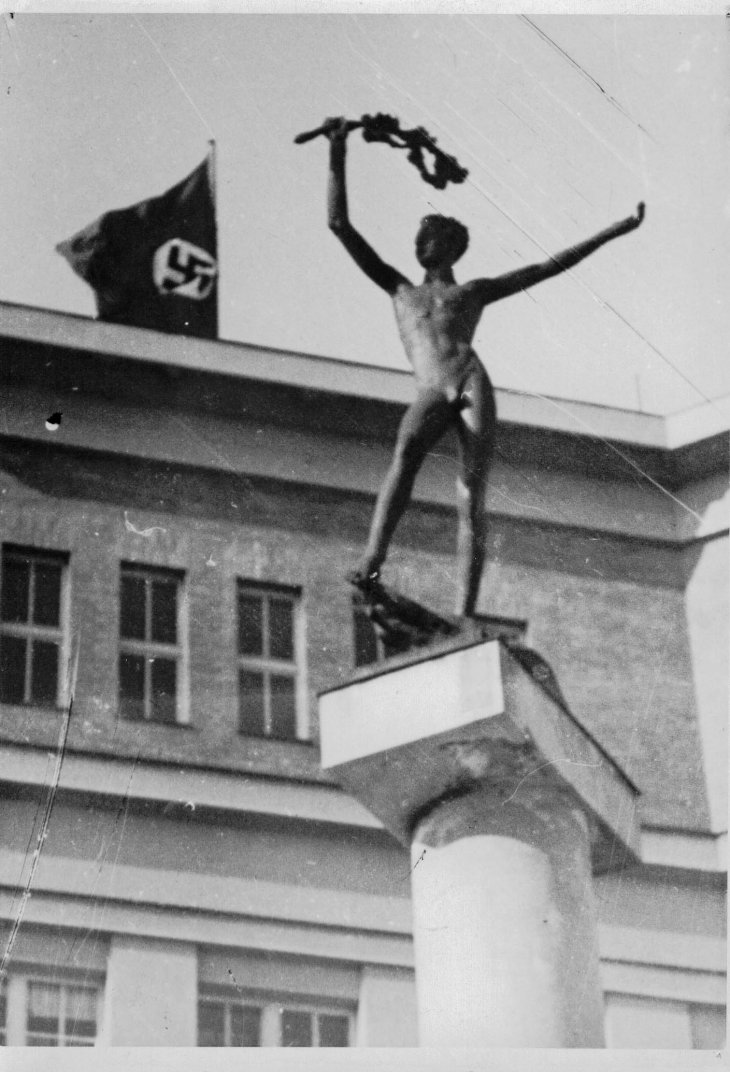 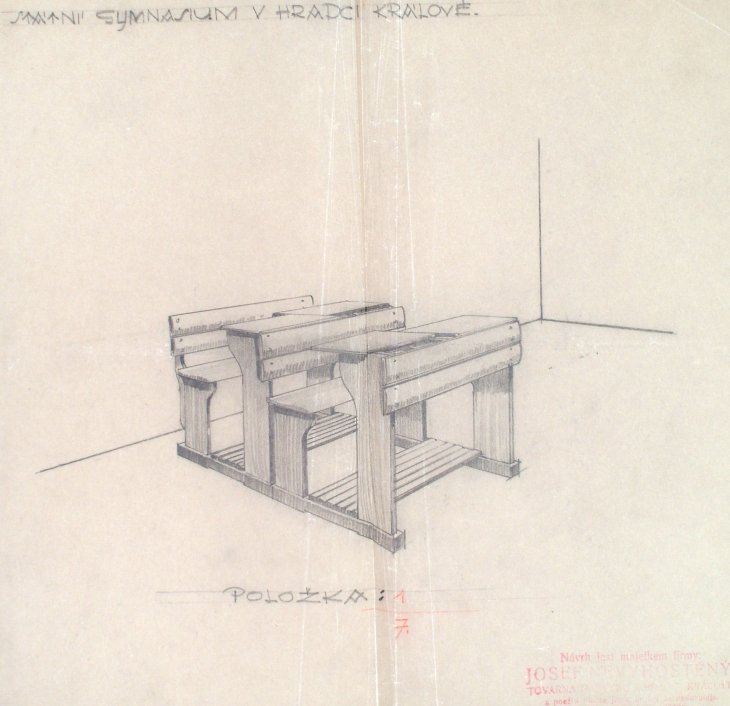 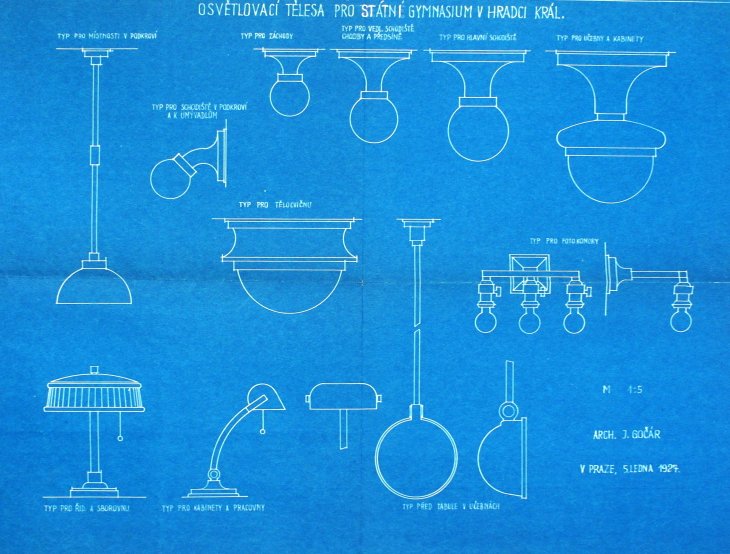 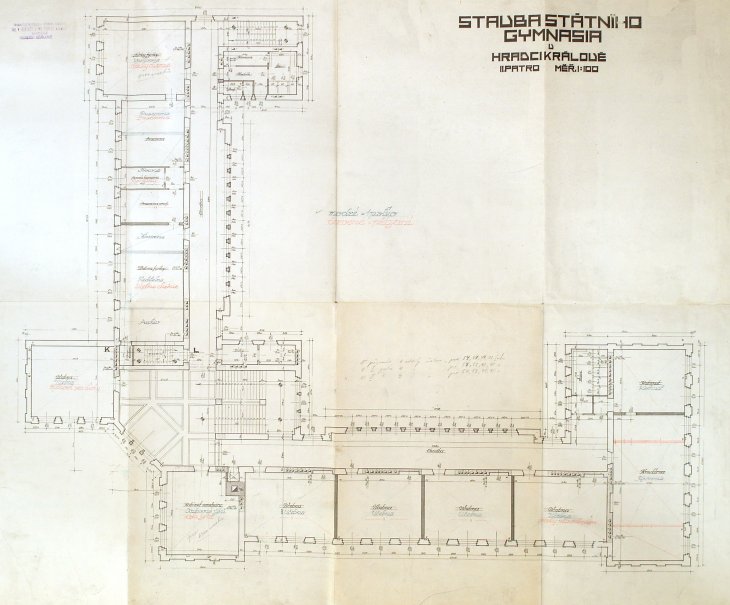