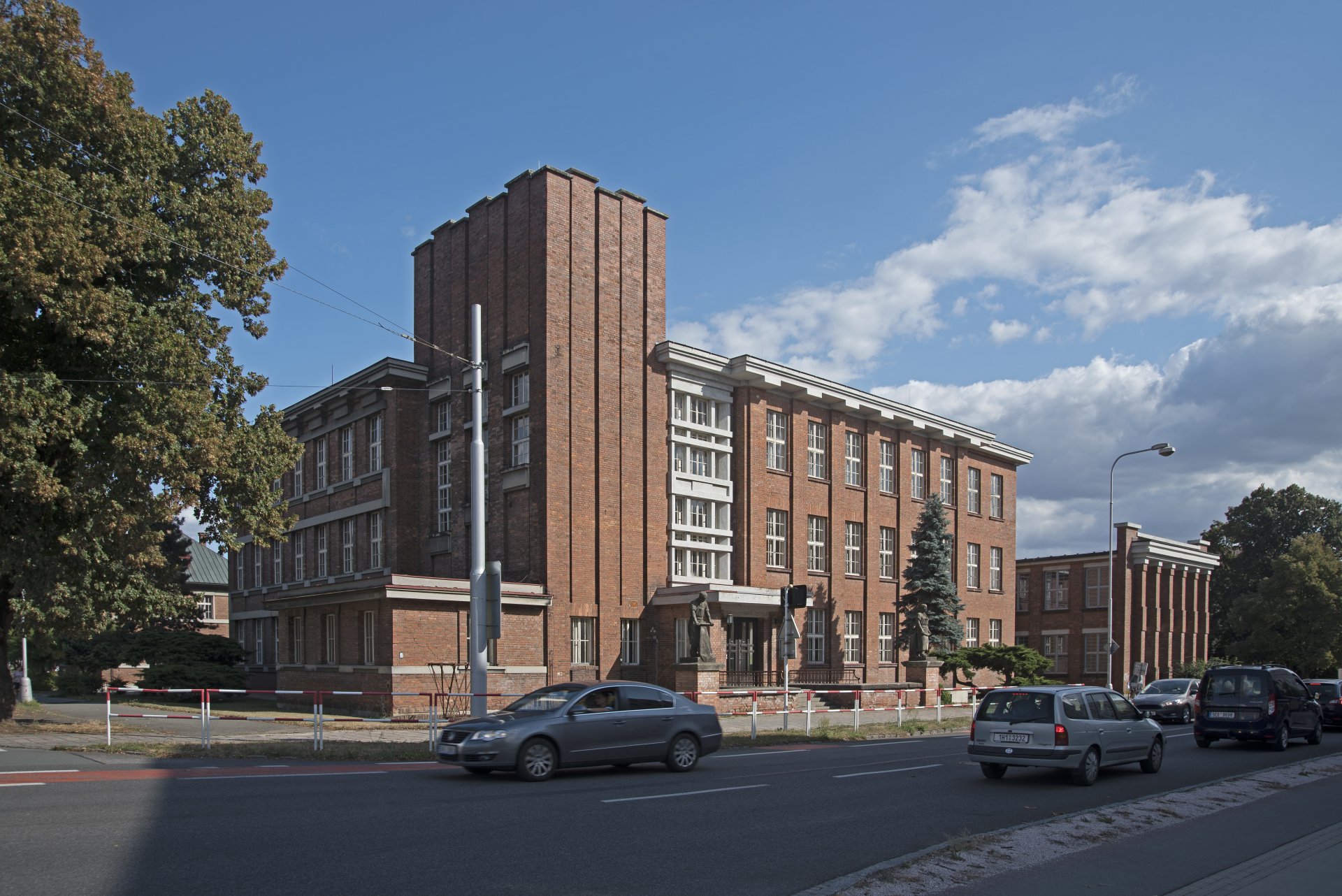 Representatives of tanning organizations sought to establish a private vocational school since 1897. When they did not succeed at Viennese authorities, the idea was promoted by Mayor Ulrich and supported by Rudolf Vitoušek (an industrialist, the mayor of the village of Třebechovice, and president of the tanners’ section). Ulrich became chairman of the Committee for the Establishment of a Tanning School and supported the proposal of the city council to donate a building site. The establishment of the school was probably pushed through by Josef Binko, Josef Gočár’s brother-in-law and founder of the local branch of the Boskin tanning company. He was vice-chairman of the committee since 1924 and helped establish all the professional organizations and associations in tanning industry.

During the construction of the Anglobanka bank building (kam.hradcekralove.cz/en/object/detail) , the architect was invited to take part in the competition for the State Vocational Tanning School. The architect submitted four studies – alternatives of the same concept. Subsequently, he was asked to prepare tender documents although at first, the committee was “not in a great favour of Gočár’s too modern project”. “To ensure perfect functionality of the future object, [Gočár] made the President appoint the director of the yet non-existent tanning school already in 1923. Bohdan Köhler, a senior lecturer and leading expert in tanning industry, did not hesitate to leave the Technical University in Brno to work on every detail of the buildings and facilities project since the beginning.”

The school building shows that the architect noticeably departed from his previous rondocubist orientation to complete effectiveness. The design of the building was also influenced by the contemporary Dutch architecture, especially the so-called Amsterdam School. Josef Gočár visited the Netherlands with his students of architecture from the Academy of Fine Arts in 1924.

In 1922, the committee unanimously decided to build the school on the construction site on the left bank of the Orlice River. The city of Hradec Králové donated the land and partly financed the construction. The winner of the competition held in February and March 1923 was Josef Gočár. The jury, however, did not choose Gočár’s design until it was urged by Mayor Ulrich. Local architect Oldřich Liska and builder Josef Jihlavec took part in the competition as well. The construction of the school building began on 21 May 1923. It was carried out by local builders V. Nekvasil and R. Schmidt. Concrete work was carried out by Bohumír Hollmann from Prague. The school was officially opened on 31 August 1924. To lay the foundations, located eight metres below the ground by the Orlice River, was very difficult. At this depth, the builders had to demolish old town walls and historic channels. According to Gočár’s designs, the complex of the vocational school included the main school building, the pavilion of workshops and the headmaster’s villa no. 784 with three flats.

The main two-storey building with flat roofs is situated on the corner. The corner is highlighted with a vertical staircase mass and tower superstructure. The school was built of bricks and it had two wings. The architectural composition used the contrasts of the materials and colours of the facing masonry and cement plaster of the cornices and lintels. The main building had a partial basement with warehouses, a workshop and some of the central dressing rooms. The staircase matter and the wing with classrooms were divided vertically with lesenes; the southern wing façade ended with a massive attic cornice. The corner avant-corps was divided with horizontal cornices. The hall wall above the entrance was segmented with complex windows. The façade in Brněnská Street is divided into three masses: the corner stair towers, the adjacent two-storey wing of classrooms, and the protruding avant-corps ground floor. The workshop halls are of a purely technical nature, including the supporting pillars and exposed beams and girders of reinforced concrete ceilings. In the halls, there were workshops, teachers’ rooms and the model department.

The figures of a tanner and a tawer in front of the main entrance were created in the spirit of civilism by Josef Škoda in the 1930. On the workshops façade, there is a sandstone relief with two lions working at tanning machines, designed by Josef Škoda as well.

The headmaster’s villa is a detached house with an effective and simple layout, and its architectural expression was a major milestone in Gočár work. It reflects his return to Kotěra’s strict structures, their tectonics blended with the latest architectural designs by Hendrik Petrus Berlage and especially Willem Marinus Dudok. The villa was designed on a rectangular plan with a protruding square entrance avant-corps and covered with a gable roof with roof dormer windows. The layout was economical and simple. There were three flats: two one-bedroom flats for the master tanner and mechanic master and one flat for the school headmaster on the first floor. The smaller ground floor flats included a hallway, kitchen, bedroom, bathroom, pantry, and toilet. The first floor headmaster’s flat included a hallway, study, kitchen, room with a porch on the south side, bedroom, bathroom, pantry, and toilet. The floor area of the flat was about 170m².

The main building is situated on the corner and has two floors. The corner with the tower superstructure included a staircase. Behind the entrance hall, there is a three-flight staircase with brick pillars and wrought iron railings. Originally, the building surrounded a landscaped atrium. In addition to classrooms, workshops, a plant and the headmaster’s villa, the complex also included a specialized library and the museum of tanning industry. In the basement, there were two boiler rooms (one for heating and one for steam production for the workshops).

On the ground floor, there were workshops, teachers’ rooms, the foreman’s office, and the model department; on the first floor, there were classrooms and a drawing office. The southern wing corridor connects the pavilion of workshops on the ground floor and first floor. The first and second floors have the same layout as the ground floor and they were used only for classrooms and teachers’ rooms. The tower superstructure above the staircase is accessible by a spiral staircase from the second floor. Originally, there was a 10mᶟ water tank. The one-storey pavilion of workshops is perpendicular to the adjacent southern wing of the main building. Towards the atrium, it ends with a short ground floor wing. In the basement, there were workshop dressing rooms and washrooms.

The interior included a bust of industrialist Rudolf Vitoušek by sculptor Otakar Švec (now missing), officially unveiled on 16 January 1929. In his ceremonial speech, trade minister Ladislav Novák said: “When I first told Dr. Rašín about the tanning school, he said: ‘Oh God, what else will they think of in Hradec Králové?’ But then he decided such a school was necessary.”

The schools educated tanners and furriers in 1924–1949. It was the only school of its kind in Czechoslovakia. In 1949, the tanning school was closed down and moved to Zlín, the centre of leather manufacturing industry. The objects were transferred to the Technical College of Engineering. Since the late 1970s, the original complex was gradually extended – the glazed entrance building and gymnasium, locker rooms, laboratories, the pavilion for leisure activities, new workshops, washrooms, and the janitor’s flat were added. The tall boiler room chimney in front of the southern wing was demolished in 1950. In 1988, the construction of new facilities at the southern edge of the complex, carried out by Stavoprojekt, started. The new buildings and modifications were designed by architect Karel Schmied. The building is used by the Secondary School of Engineering. The headmaster’s villa serves as the headquarters of the school. It is linked to the other school buildings with corridors. 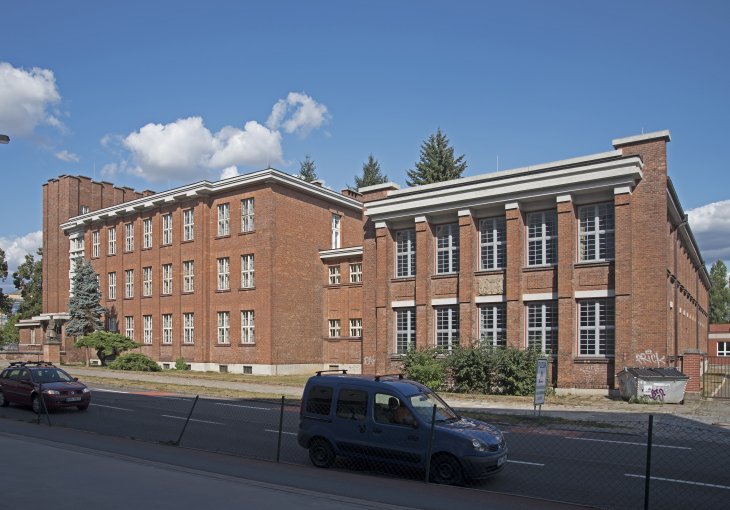 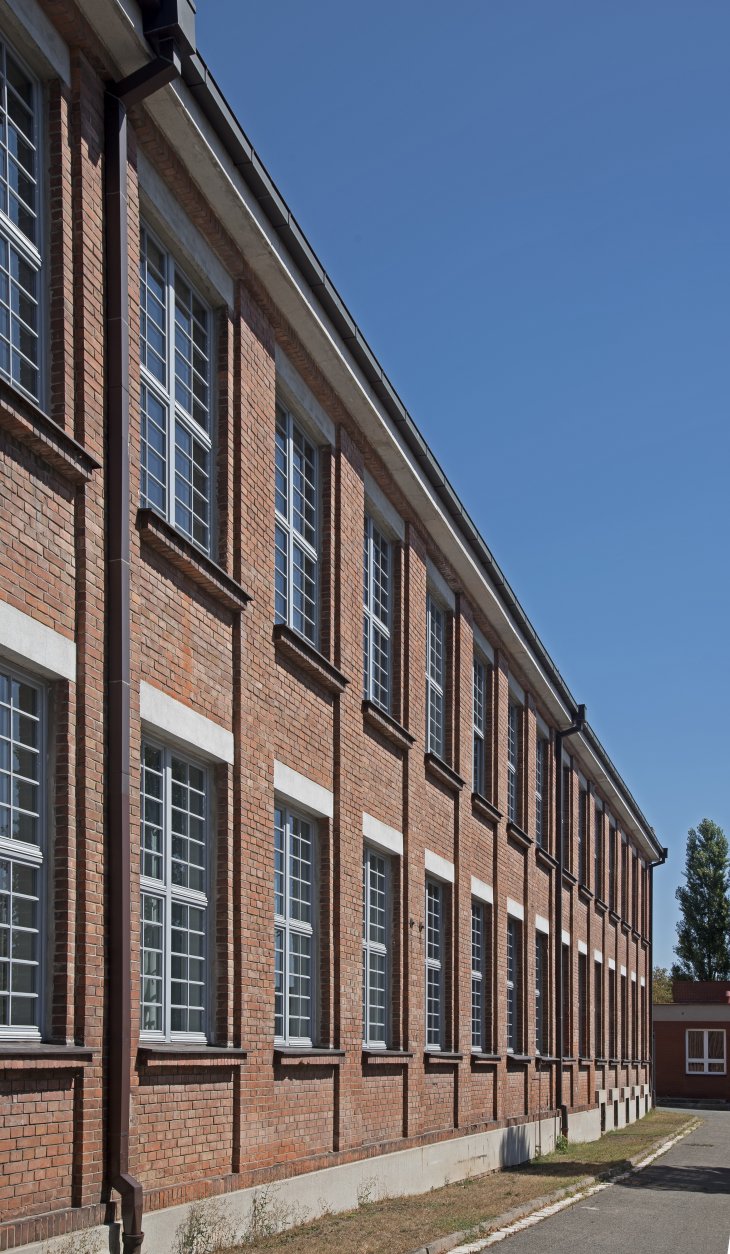 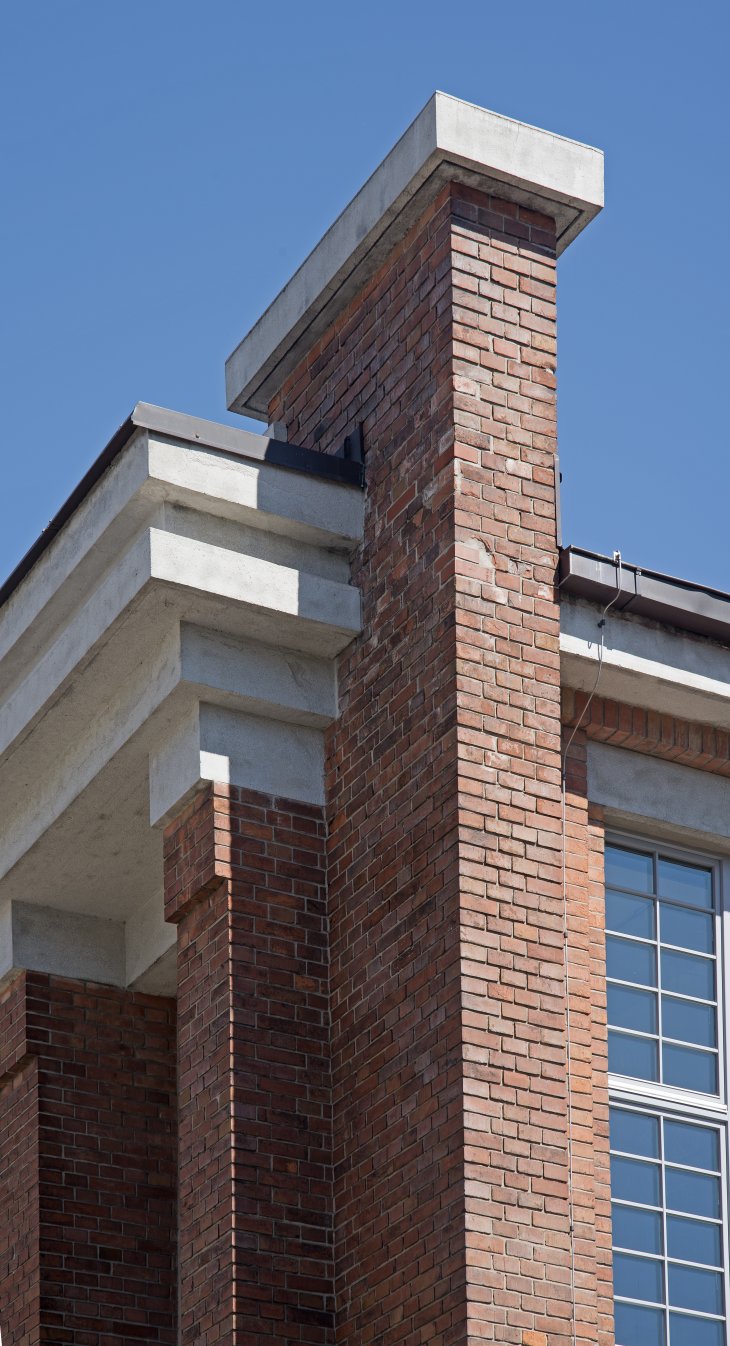 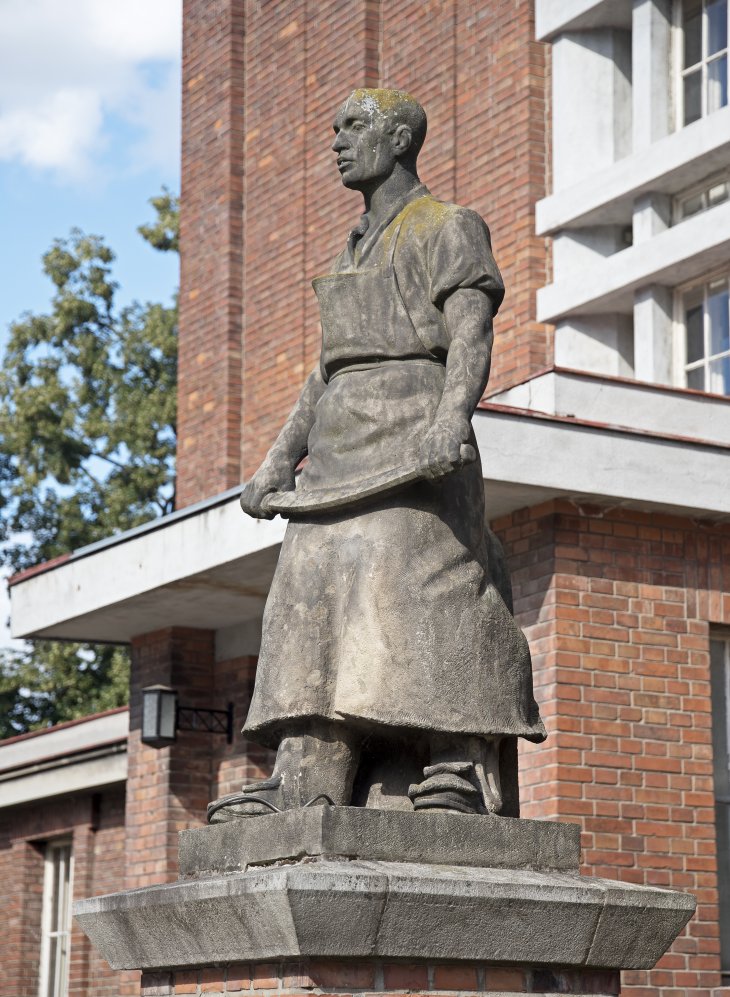 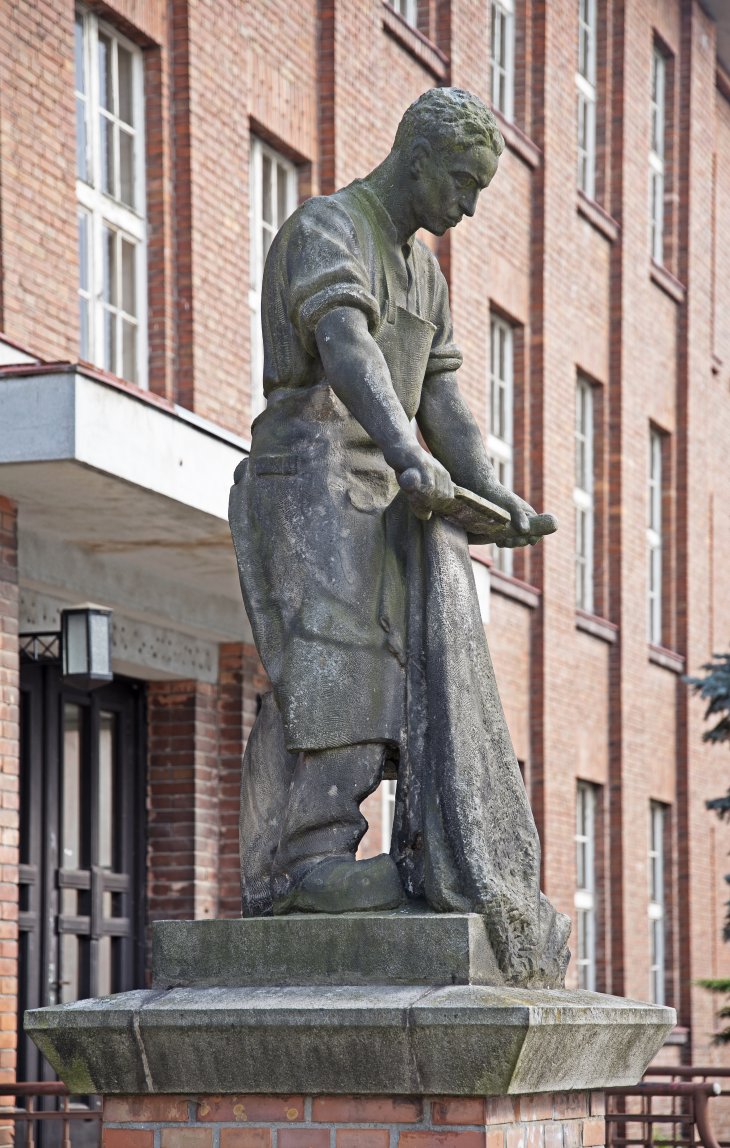 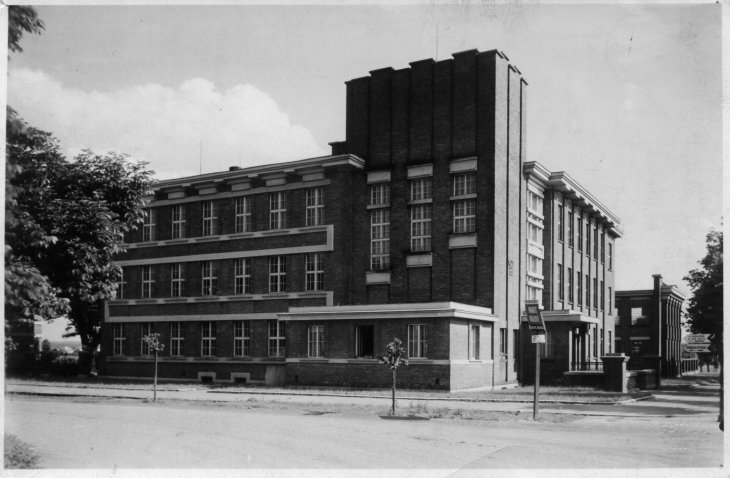 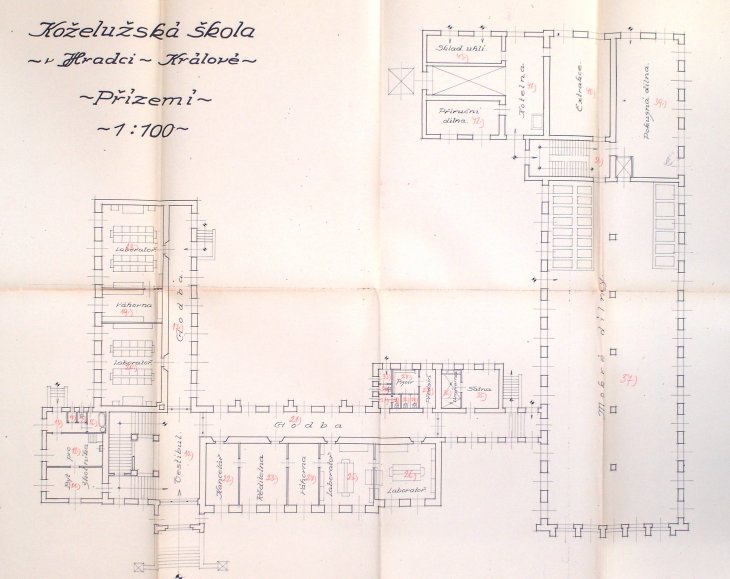