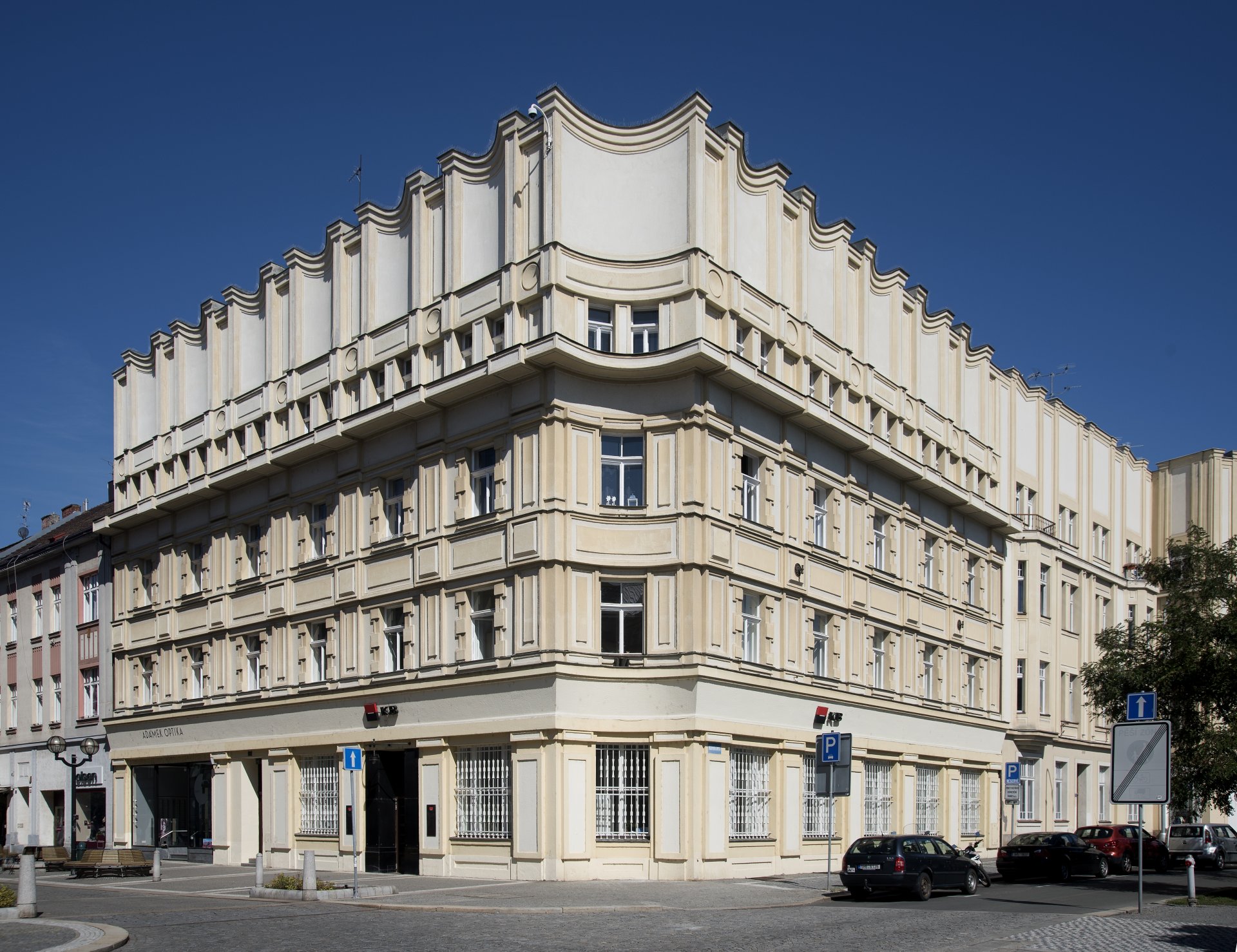 The idea of Masarykovo Square (Husovo Square until 1931) first appeared in the general urban plan by architects Oldřich Liska and Václav Rejchl in 1911. Mayor František Ulrich decided the adaptation of the square should be designed by Josef Gočár, who returned to the city in 1922 to design the local branch of the Anglo-Czechoslovak bank.

The construction of the building was launched on the square corner by Alois Lípa in October 1922, but in July 1923, the plot with the unfinished four-storey house was purchased by the Anglobanka bank. The plans were then reworked by Josef Gočár for the bank branch. After the construction was completed, Gočár united the façades of the adjacent houses. To keep the same height, he added a massive cornice above the second floor and visually divided the third floor with smaller windows (designed in 1923-1924, built by Josef Fňouk). Thus, he created the square façade arch, forming a decent background for the monument to T.G. Masaryk. The loft space is covered by a massive attic.

The Anglobanka building should be seen as part of the square adaptation. The atmosphere and optimism of the growing city was supported by festivities and celebrations where modern architecture played an important role. The square with the statue of the first Czechoslovak President was designed for ceremonial purposes and celebrations associated with the national statehood. This is evidenced by the houses behind the statue, the layout and openness of the square, and the monumental pedestal of the statue. The monument was built and the structural changes of its surroundings made in 1926-1927.

Gočár designed the architectural form of the monument, and supervised its production in sculptor Otto Gutfreund’s studio and its construction. At first, Jan Štursa and Pavel Janák were commissioned to work on the order. Štursa, however, had a difficult life and creative crisis and put off work on the commission even after he received a high prepayment. After his suicide, the commission was taken over by Gočár in July 1925. The monument was ceremonially unveiled on the anniversary of the establishment of the Czechoslovak Republic, on 28. October 1926. The guests included the President and the creators of the square and the monument – sculptor Otto Gutfreund and architect Josef Gočár. In front of his own monument, Mr. President said: „So, is this the monument you built to me? To have your own monument when you are alive is strange. I don’t know what it means: they usually build monuments after you die. It’s an exclamation: ‘Watch out! Watch out!’”

The original documentation from July 1922 for the previous house owner, Mr. Lípa, was redesigned by Gočár in March 1923. The building plans and construction were carried out by Josef Fňouk from Hradec Králové. The construction was started by A. Lípa’s company in October 1922 and finished by the Anglo-Czechoslovak Bank (which bought the land with the unfinished object in July 1923) in November 1923. During the construction of the bank building, in 1923, the architect was invited to take part in the shortlist competition for the State Vocational Tanning School.

The corner building is an example of the Czech Rondocubism in architecture. The three-story building has a high attic and a concave corner. The last floor has an arc attic cornice. Gočár designed it “in the period style of the Czech arch Rondocubism”. The almost Renaissance attic was a new element in Gočár’s work. It ends with the symbolical letter M and can be found on three more buildings nearby.

The entrance is panelled with polished Swedish granite. The front façade facing Čelakovského Street has six window axes; the corner has 12 window axes. The façades are plastically segmented. The oblique smooth frieze above the ground floor and the massive main cornice above the second floor divide the building horizontally into three parts. On the ground floor, there was the bank and a store; the window bars have been preserved. Upstairs, there were flats (11 flats in 1924). Behind the hall, there are office rooms. The store faces the street and partly extends to the rear yard wing (with a terrace on its roof); cellars were built under the entire object.

Gočár designed all the interiors – the great hall with wooden panelling, the bank counters, furniture, lighting, door hardware, railings, and window bars – in 1922–1923. In the bank hall, there is still the original wood panelling, coffered ceiling, and eight brass lights. The bank counters combining wood and brass and the original furniture, produced by Josef Nevyhoštěný’s furniture company from Hradec Králové, have not survived. In the foyer, there is still the black and white granite panelling on the walls. The wooden entrance door with a fanlight and the brass lights on the façade are original.

The dynamics of the building fascinated functionalist critic Oldřich Starý who described Gočár’s Rondocubist period as “plastic decorativism of an almost baroque nature”. Marie Benešová saw the new “element of a deeply altered, rhythmic, as if infinite moving mass” in the bank sign. The absence of arcs and circular segments make the building a “remarkably peaceful Rondocubist construction”.

In 1934, display windows were built at the two ground floor windows facing Čelakovského Street. In 1950, 1961, and 1965, the large flats were divided and rebuilt into smaller ones.

In 1985, the store, including its display windows, was renovated. 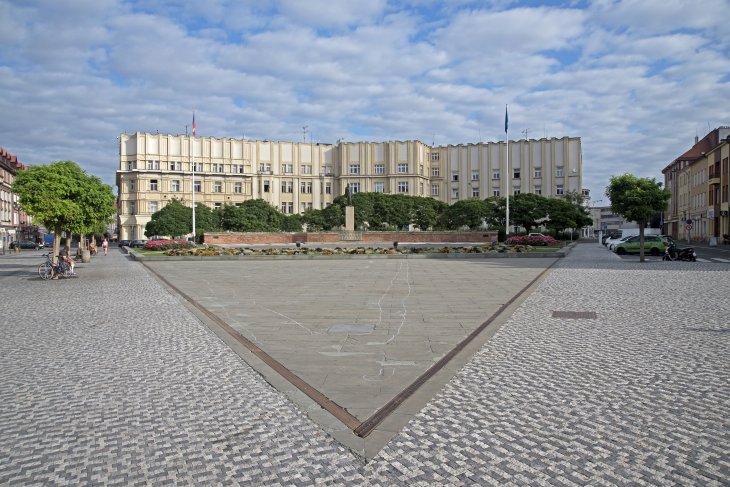 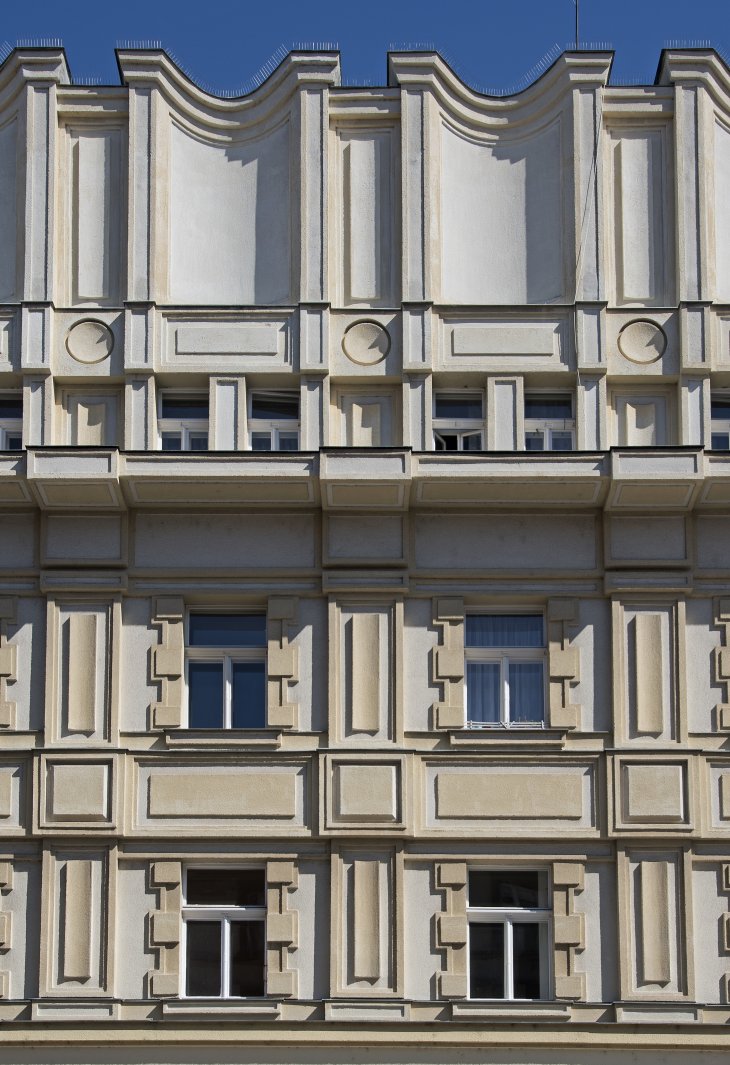 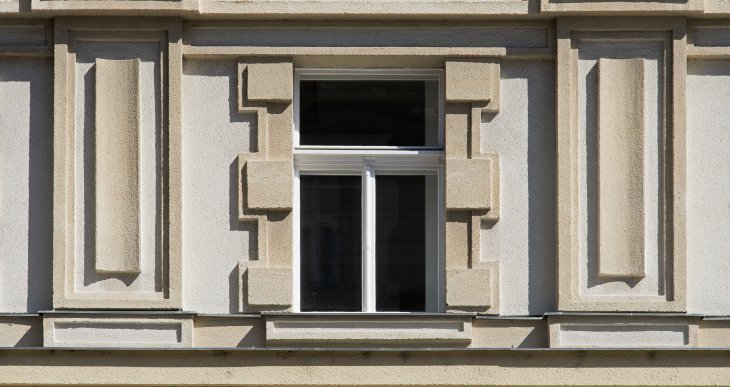 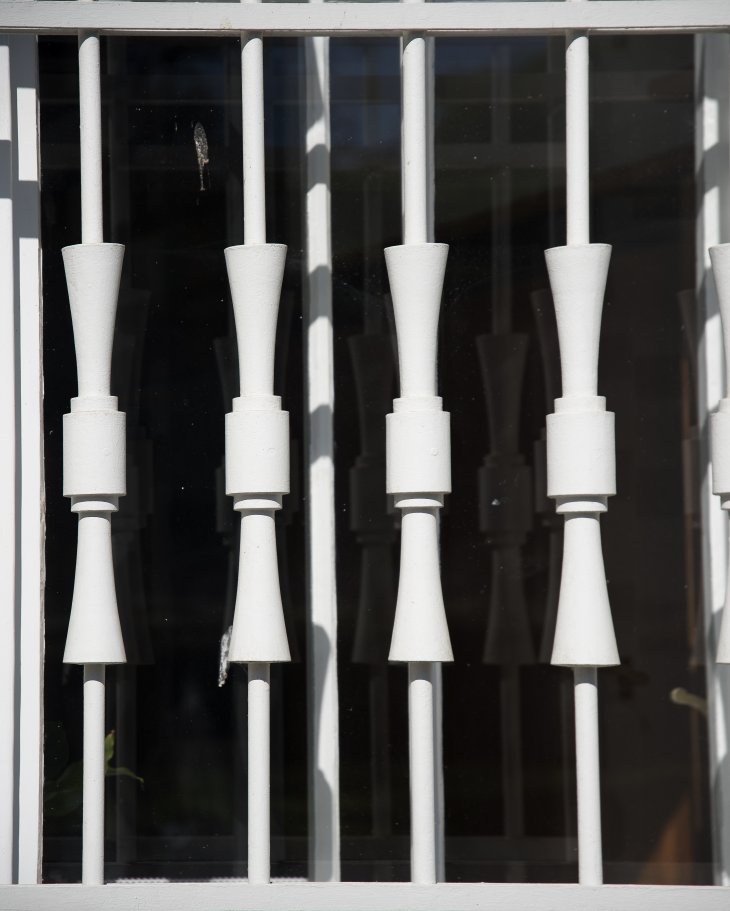 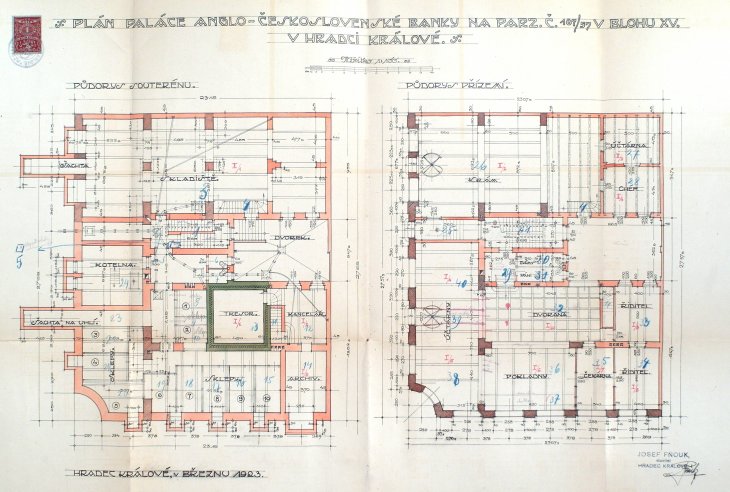 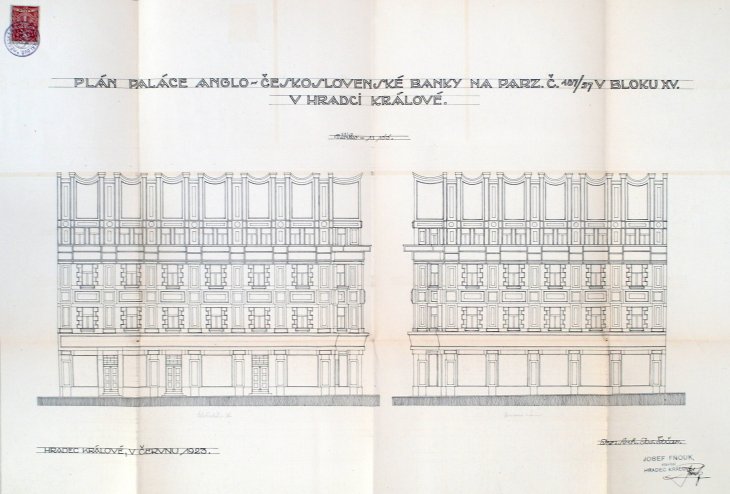