After he finished his studies at realschule in Prague–Karlín, Václav Weinzettl studied building construction at the Czech Technical University in Prague in 1882–1887. In the next three years, he worked for architect Achille Wolf, who, like Osvald Polívka, participated in the Mortgage Bank project in Senovážné náměstí Square in Prague. In 1890, Weinzettl started teaching at the Vocational Secondary School of Sculpture and Stonework in Hořice. He worked there until 1895, when he passed a test for builders in Prague and found a job as a building adjunct in Vienna. After two years, he returned to Hořice as a teacher of architecture and construction; from June 1904, he led the school provisionally; in September 1905, he became its headmaster. He was the head of this institution with a large number of prominent students for 25 years. Weinzettl created several projects for the school, such as the pavilion of sculpture and stonemasonry at the Economic, Industrial and Art Exhibition in Hořice in 1903. He also wrote several academic publications such as “O lidových stavbách” (On Folk Architecture), “Kameník a sochař” (The Stonemason and the Sculptor), and “Udržování pomníků” (Maintaining Memorials). In his book, “Víra v nové době” (Faith in the New Era), he promoted understanding between different religions and even designed an ecumenical temple, combining elements of different churches and houses of worship and religion, the so-called “temples of culture”. Weinzettl described the design in the following way: “The main area [of the temple] is large, high, and uniform, without any colonnades and with the layout of a central dome rather than a basilica. [...] In the background of the main space, designed as a lecture hall, there will be a city memorial, a fireproof closed construction where the most memorable city deeds will be stored. [...] On top of the memorial, there will be the main work of art, preferably a gigantic statue representing God-Life in a serious and noble way.”[1].

In his home town, Hořice, Weinzettl designed the obelisk at the top of St. Gothard Hill to commemorate local politician F. L. Rieger. The twelve-meter high sandstone monolith had been in the town since the days of the above-mentioned exhibition, but it was not used until 1907. Weinzettl was also involved in the Committee for the Maintenance of the Monuments of the War of 1866, which led him to design military funeral monuments and sculptures in the local battlefields of the Austro-Prussian War. The first one was designed in 1893: the historicist memorial at Chlum, the so-called Battery of the Dead, was a massive column with a statue of Austria holding a shield with the Austrian eagle, symbols of heroic death, and a jellyfish. Other monuments designed by Weinzettl were built in Horní Přím, Čistěves, and Probluz. The highlight of Weinzettl’s work in this area was undoubtedly the ossuary with a cemetery for soldiers killed at Kbelnice near the town of Jičín. It was built in 1906 and its façade features Art Nouveau symbolism, as developed by Otto Wagner in Vienna and Josef Fanta in the Czech lands. The most significant war monuments designed by Weinzettl include the memorial to honour the important battle at Křečhoř near Kolín that took place during the so-called Seven Years War in 1757.

Between 1903 and 1904, Weinzettl designed a new synagogue in Hradec Králové the construction of which was completed in the 1905. It was built on a plot with a dull corner which affected its asymmetrical layout with an entrance on its shorter side. The building features the then fashionable Oriental vocabulary of the Egyptian-Assyrian style, but the style of the main façade echoes the form used later on the ossuary near Kbelnice. Both the projects prove that Weinzettl was well aware of the development of contemporary architecture and able to learn at least some of its principles. He used this knowledgeable approach even after the war when his work was characterized by a “simple and distinctive structure of forms when decorative features become primarily symbols”.[2] In 1929, Weinzettl retired and moved to Prague, where he died the following year.

1898
Memorial to the Battle of Kolín Křečhoř

1902
Memorial to the 51st regiment, Čistěves

1923
Memorial to the fallen in WWI, Kolín 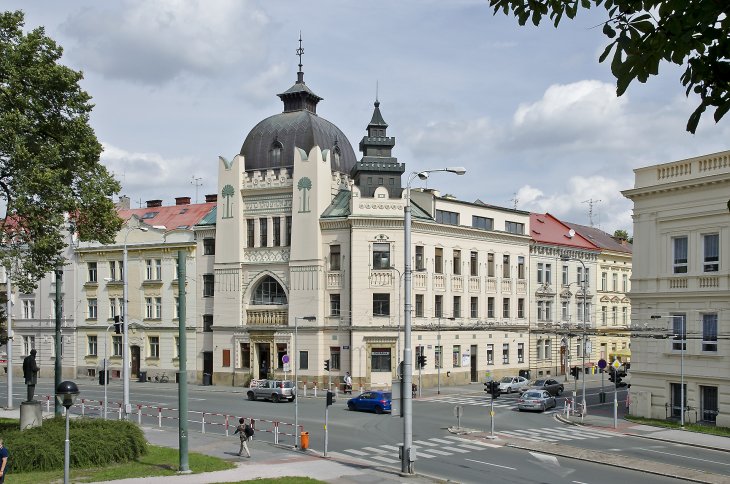