Oldřich Liska was born in the small village of Kamhájek near Kolín in Central Bohemia on 17 April 1881. His parents, Jozef and Anna, came from humble peasant families that lived in the surrounding villages for generations.[1] Oldřich Liska was baptised in the Lutheran Church in Velim and remained a supporter of the reformation concession for all his life. In Kolín, he went to an elementary and town school; in 1899, he trained at the Guild of Fine and Construction Crafts to become a bricklayer. Then he enrolled at the Imperial State Technical School in Prague, and after graduation in 1901, he went on to study at the School of Applied Arts in Dresden. He studied under Professor Heinrich Watzlawik and collaborated with him until 1907, when Liska worked as a trainee at Watzlawik’s design studio.

After his return to Bohemia, Liska acquired experience primarily as a construction manager and master builder. While still a student, he worked for Matěj Blecha’s construction company in Prague. Between 1901 and 1902, he got a job from builder Robert Niklíček from the town of Polička. After military service, Liska left for Germany in 1907, and during his travels in Munich, he met the Viennese designer Ladislav Skřivánek, a pupil of architect Ladislav Ohmann. In 1908, he shortly worked in his Skřivánek’s design studio, learning the basics of building design in the style of late Viennese and German Art Nouveau with elements of architectural decorativism. In the same year, builder Josef Jihlavec from Hradec Králové offered him a job of a construction manager. He agreed and moved to Hradec Králové, the East Bohemian city that became the central point of his professional and personal life for the next 39 years. In Hradec Králové, Liska got his first building design contracts. Between 1908 and 1909, the conservative villa of Marie Šanderová at 217 Střelecká Street was built according to his design. However, the Protestant churches in Hradec Králové and Pečky were more important for Liska’s career. The house at 529 Nezvalova Street in Hradec Králové was designed in the traditional style of modern neoclassicism, late German Art Nouveau, and decorativism. In contrast, the Protestant church at 480 Husovo Square captures attention with its unique interior in the style of the Czech architectural Cubism.

The main Liska’s projects were designed in the 1920s and early 1930s. Due to the requirements of the newly established Czechoslovak state, Liska had a long series of opportunities to design objects to address the inter-war housing crisis. The projects included half-open blocks of houses for the staff of the directorate of the Czechoslovak Railways and projects in Střelecká, Mánesova and Klumparova Streets (1919–1924), both in Hradec Králové, and the emergency residential houses on Čechovo nábřeží Embankment in Pardubice and nábřeží Svobody Embankment in Polička. All of the above-mentioned projects were designed in the same period, and the façades were inspired by both the historicizing elements of neoclassical architecture and Neo-Baroque and the fashionable trends of Cubism and the national style. In this period, Liska also took part in many public and shortlist architectural competitions in Hradec Králové. In the fight for public contracts, he competed primarily with one of the most important interwar architects, Josef Gočár. For example, he participated in the competition for the building of the vocational school for tanners, elementary schools and town schools, the structural changes of Ulrichovo Square, and the buildings of district and tax offices. Although Liska’s independent design studio, established in 1921, had a strong reputation for private commissions in East Bohemia, he often failed to win public architectural competitions not only in Hradec Králové, but also in the neighbouring town of Pardubice. [2]

Liska’s most important projects included school buildings. In the late 1920s and throughout the 1930s, the architect made most of his creative efforts in this area. His designs were used to build a series of schools with the traditional corridor disposition, such as the State Grammar School in Jaroměř built at 423 Lužická Street between 1925 and 1928. Liska was also successful in other two East Bohemian towns, Žamberk and Kyšperk (today’s Letohrad) where he designed trade schools after 1930. At that time, he decided to follow the modern Western European trends and introduced the so-called hall disposition into Czechoslovak architecture. This new principle, applied particularly in provincial educational institutions, creates a system of a central hall that becomes a major communication, sports and cultural centre of the school. The first project of this nature was carried out in Černilov in East Bohemia in 1930, in the form of sober purist architecture referring to the principles of functionalism. Similar school buildings, based on Liska’s designs, were built in Bystřice in Central Bohemia in 1934, in Byškovice in 1937, and in Borohrádek in 1939.

Between 1931 and 1933, the building of the municipal baths in Hradec Králové, designed by Liska, was built. The architect considered this project as the flagship of his life’s work. With its equipment (e.g. artificial waves) and size, this “white fairy-tale on the banks of the Elbe River” at 842 Eliščino nábřeží Embankment, designed in the nautical forms of functionalism, became one of the main manifests of modern Czechoslovak architecture in Hradec Králové. The list of major Liska’s designs includes his own villa at 842 Střelecká Street in Hradec Králové, built in 1932. This project, combining traditional forms (the neo-classical peristyle in the garden, tiled panelling in the stair tower) and avant-garde modernism (strip windows, an irregular disposition, a purist façade), illustrates the architect’s ability to switch from his conservative training to new trendy architectural trends.

Liska’s co-workers included, for example, the promising project architect Vladimír Fultner from Hradec Králové, who collaborated on the design of the building of the General Credit Company and Špalek’s department store in Hradec Králové. In let 1910–1914, Liska cooperated with the builder Josef Fňouk. This collaboration culminated in the establishment of their construction and design office in this period. While Fňouk amended some of Liska’s projects, such as the Protestant church in Hradec Králové, Liska introduced Fňouk to current design trends the builder used in his own architectural plans in the following years.

The last projects by Oldřich Liska were not created in Hradec Králové. In 1947, he moved to the war-torn Opava to work with the local Stavoprojekt Company on the regulatory and structural transformation of the Silesian town. Despite his activity and a large number of designs, however, only one of his projects, the Skasik department store, was built after 1948. The last project was realized in Jihlava: the district health centre at 2497 Vrchlického Street was built between 1947 and 1955.

After 1947, in the new social climate of the Third Czechoslovak Republic, Oldřich Liska broke his links with the district of Hradec Králové and decided not to work in his own design studio. Despite the challenges the Opava project of the Stavoprojekt Company presented to architects, who wanted to design buildings after World War II again, Liska was not given too many opportunities. Although his designs were not often executed, he designed other projects and urbanisation solutions.

While other architects were often strongly political, Oldřich Liska was never an agile representative of any political party. He was not active in the public space, and he was not engaged in pedagogical activities or artistic and cultural institutions. His only public activity took place in 1919, when he represented the Czechoslovak National Democracy in the art care department and board of trustees of the Industrial Museum. In his work, Liska did not even follow his own theoretical studies, where he developed approaches and principles for his architecture and regulatory studies.

At the turn of the 1940s and 1950s, he manifested a certain degree of conformism when he accepted some of the artistic requirements of socialist realism in his projects to increase his chance of executing his designs. After moving to Brno, he tried to intervene in the urban area of his long-time home town of Hradec Králové and took part in the public architectural competition for a housing estate at the confluence which took place between 1958 and 1959. However, he did not succeed. Oldřich Liska died suddenly in Brno on December 11, 1959, at the age of 78. He was buried at the central cemetery in Poděbrady, just as his wife Anne, née Fialová, who came from Poděbrady, wanted.

[1] His father was from Kamhájek and his mother came from the nearby village of Křečhoř. At present, Kamhájek is a cadastral part of Křečhoř.

[2] In addition to participation in many public and shortlist architectural competitions in Hradec Králové, Liska also tried his luck in Prague, Brno, and Náchod. In Pardubice, he took part only in one architectural competition for the building of the Directorate of Post Offices and Telegraphs, together with Ladislav Machoň whose design was chosen by the jury. 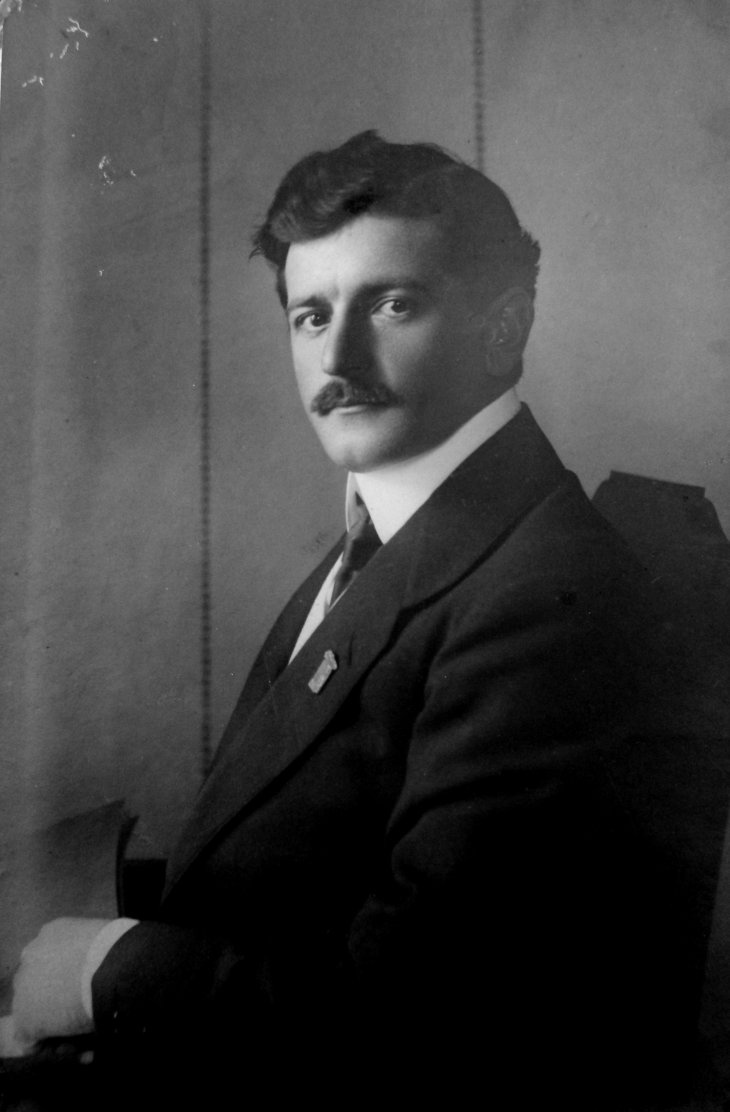 Tenement houses for the Cooperative for Building Houses for Private Office Workers of the Bohemian Kingdom, 549 Gočárova Avenue, 550 and 551 Šafaříkova Street, Hradec Králové 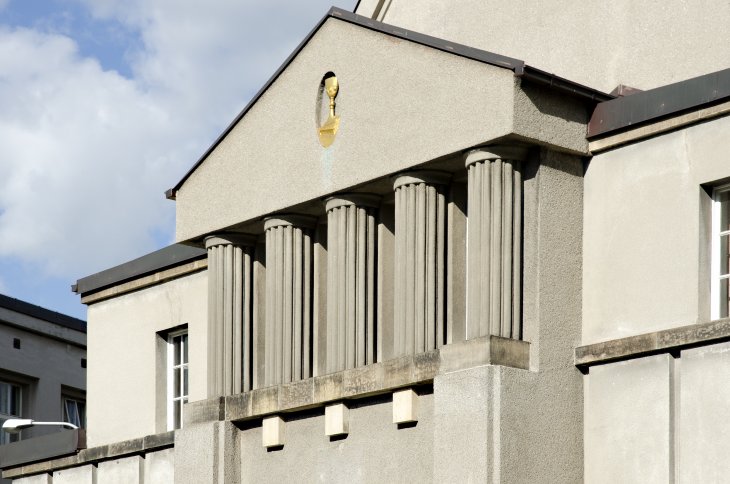 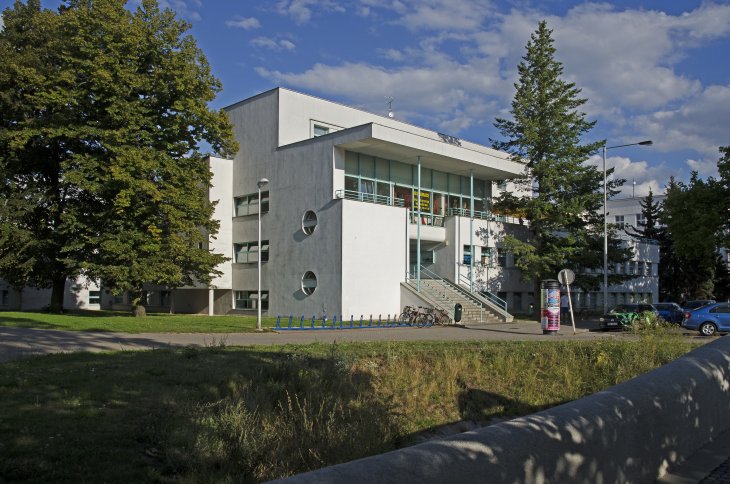 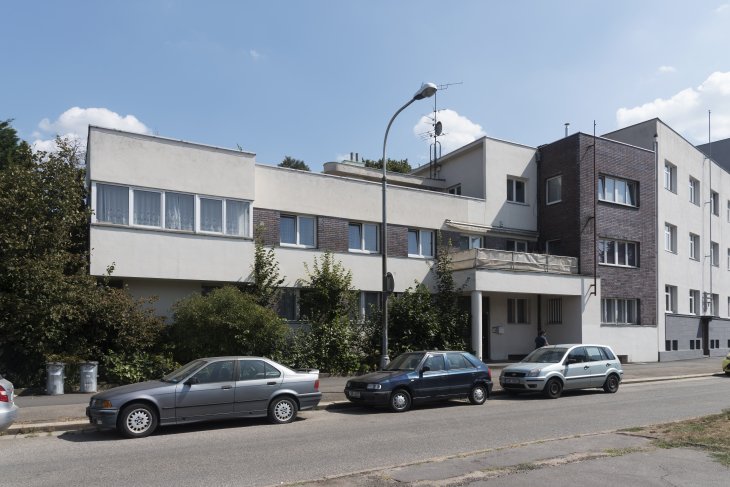 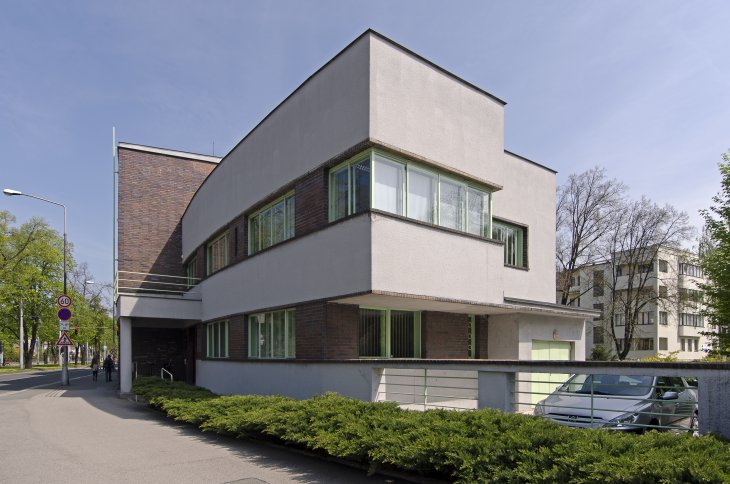 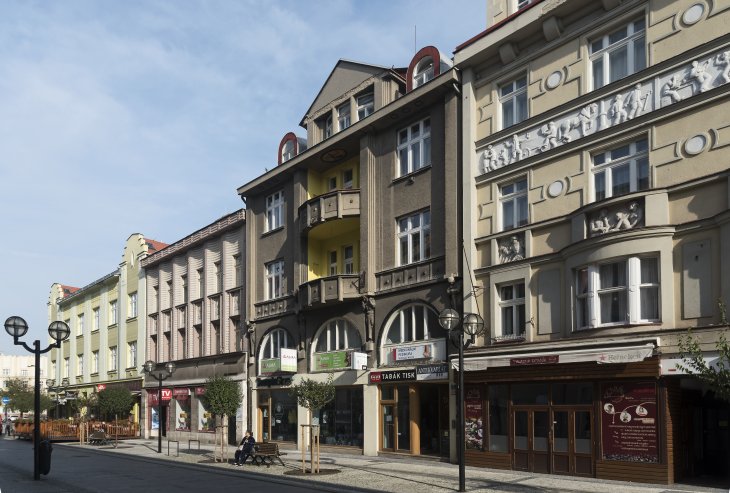 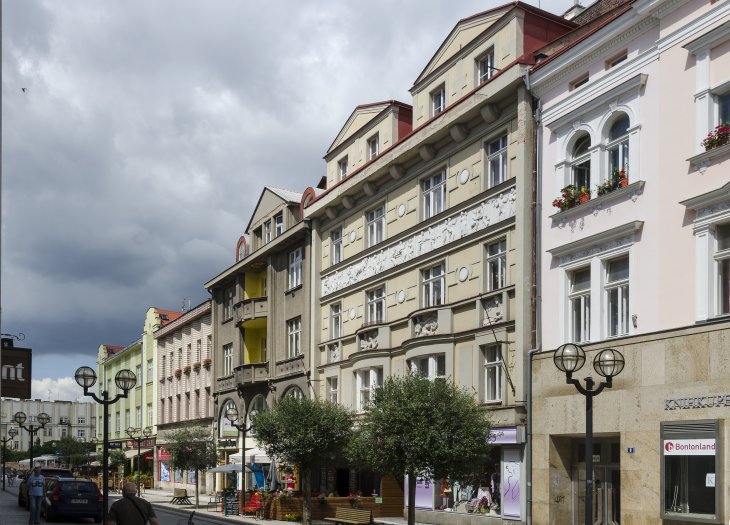 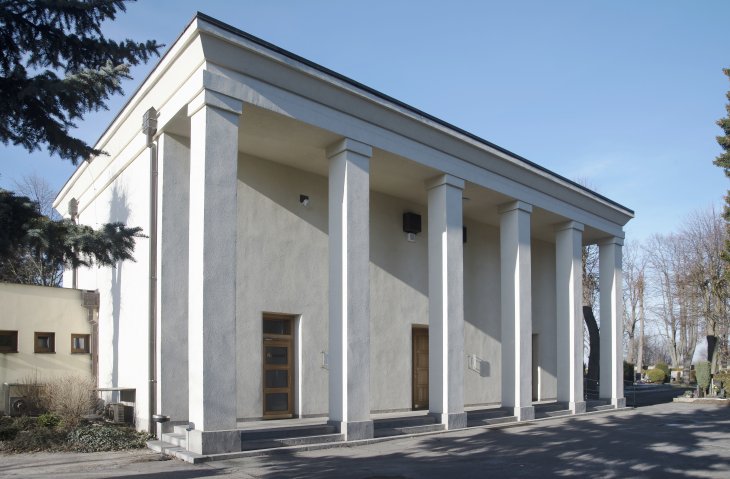 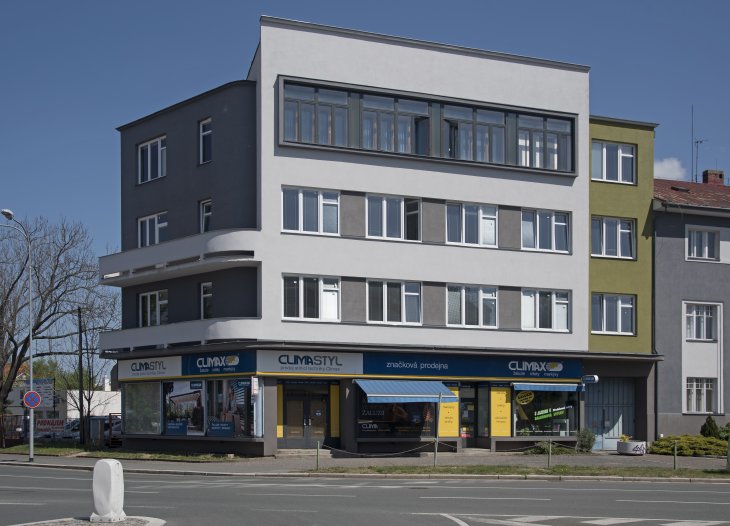 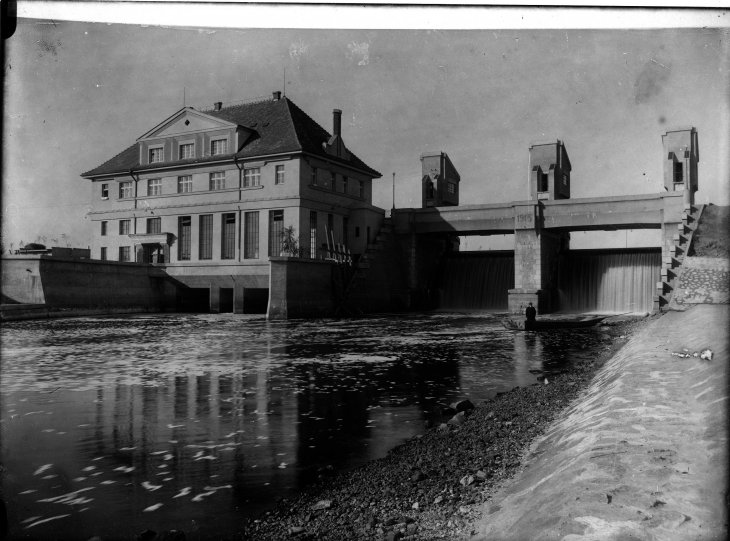 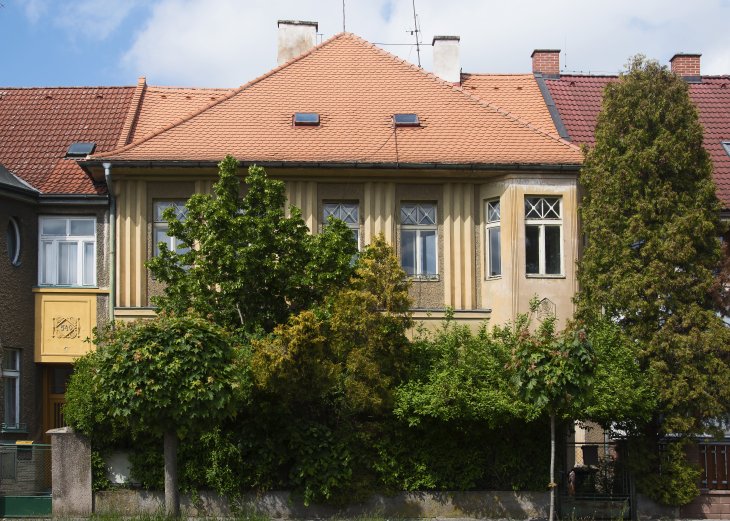 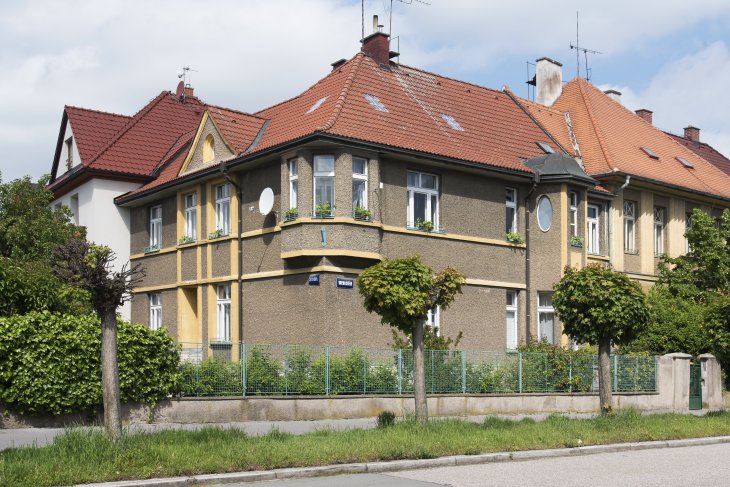 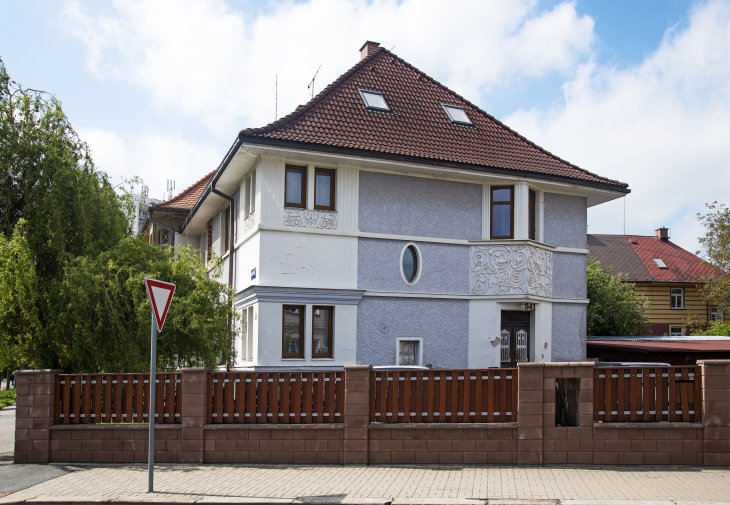 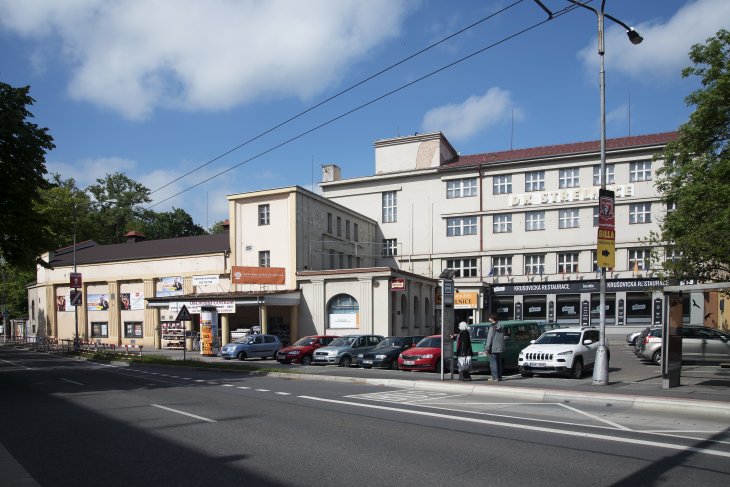 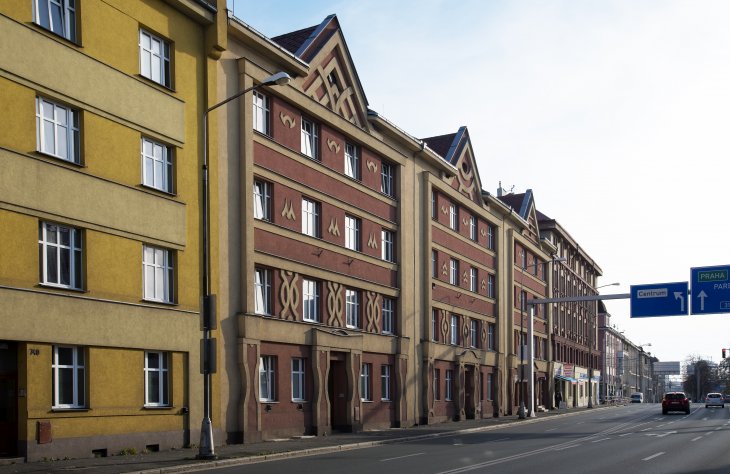 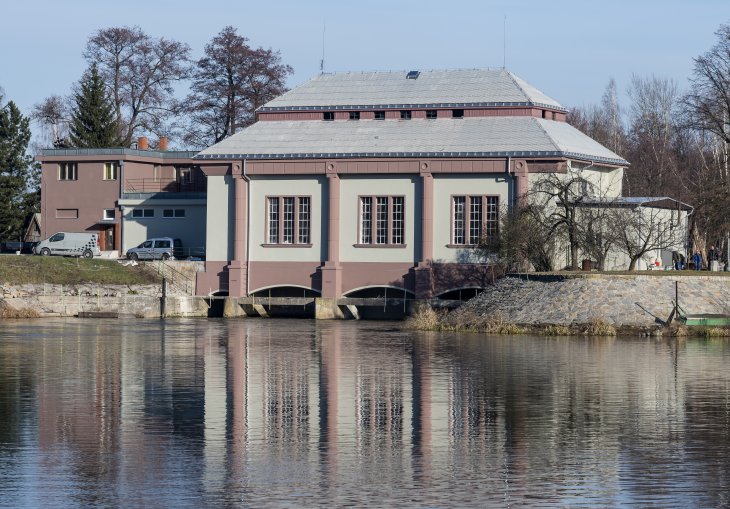 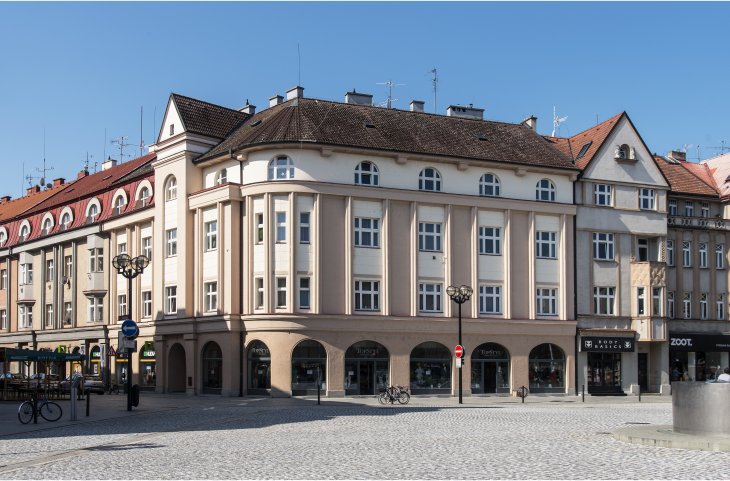 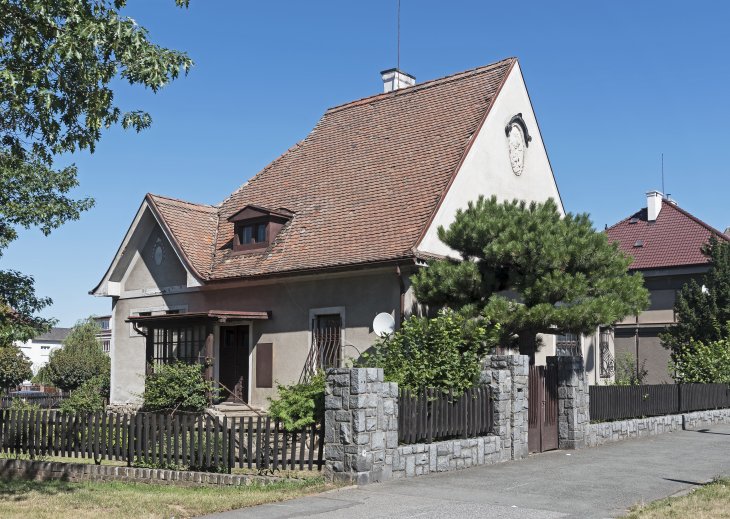